EXPRESS INFORMER > News & Politics > Fiancée of footballer Jordan Sinnott, 25, who was killed in pub row announces birth of his daughter

The heartbroken fiancee of a footballer killed by drunk thugs in a pub row has revealed she has given birth to his baby – eight months after his tragic death.

Kelly Bossons, 27, found out she was pregnant with her ‘miracle daughter’ three weeks after partner Jordan Sinnott’s shock killing.

The footballer, who played for Northern Premier League side Matlock Town FC, was fatally punched to the floor in an attack sparked by the victim agreeing one of his attackers was ‘fat and ginger’.

The 25-year-old midfielder died in hospital after suffering a fractured skull and brain damage in the assault in the centre of Retford, Nottinghamshire, on January 25.

But after months of heartache over the loss of her fiancee, last month, Kelly, took to Facebook to share the good news – the birth of her baby daughter.

Kelly said she had decided to name the ‘beautiful baby girl’ Maisie Jordan Sinnott – in honour of her father who she said ‘will always be watching over us’. 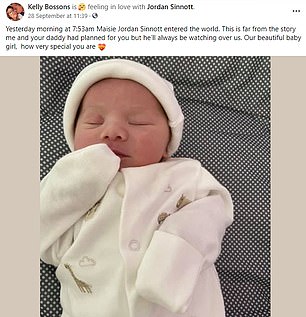 Kelly Bossons (pictured left with Jordan), 27, found out she was pregnant with her ‘miracle daughter’ three weeks after partner Jordan Sinnott’s shock killing. Kelly said she had decided to name the ‘beautiful baby girl’ Maisie Jordan Sinnott (pictured right) – in honour of her father who she said ‘will always be watching over us’. 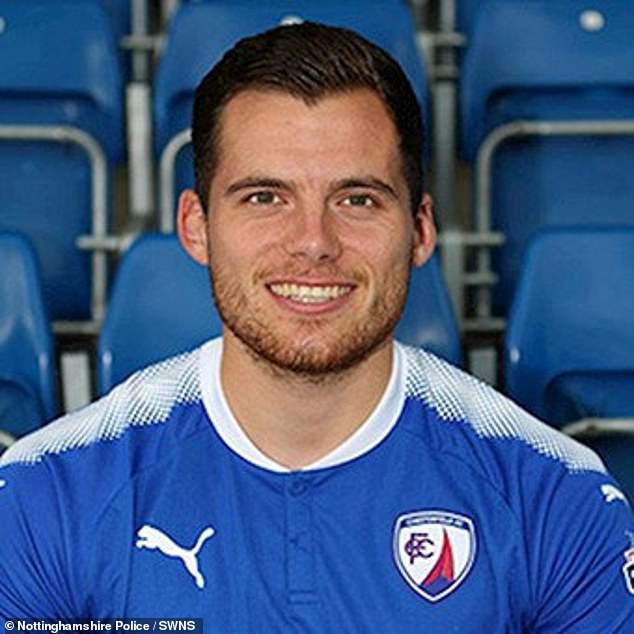 Jordan Sinnott, 25, died in hospital after suffering a fractured skull and brain damage in an assault in the centre of Retford, Nottinghamshire, at around 2am on January 25

‘This is far from the story me and your daddy had planned for you but he’ll always be watching over us. Our beautiful baby girl, how very special you are.’

In an interview with The Mirror, the sales manager added: ‘Our miracle daughter was Jordan’s gift to me. My heart breaks when I think how much he would have loved her.

‘He loved his family, my family and wanted nothing more than to create our own.

‘Now, thanks to two thugs’ brutal jealousy, I am left without the love of my life and Maisie will never know her lovely, funny, kind daddy.’

In July, a court heard how two men attacked Mr Sinnott, the son of ex-Bradford and Crystal Palace star Lee Sinnott, after a ‘misplaced joke’ at a bar.

Prosecutors said Kai Denovan ‘flew immediately into a rage’ after the footballer joined in with what he believed to be the defendant’s ‘self-deprecating humour’.

Jurors heard the man told Mr Sinnott he was a ‘good-looking lad’ and would have no trouble ‘pulling girls’ – unlike him, who was ‘fat and ginger’. 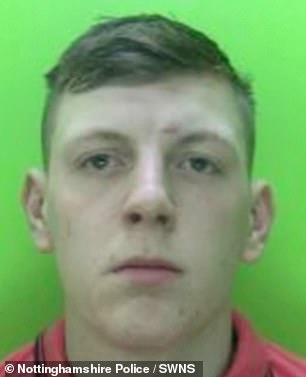 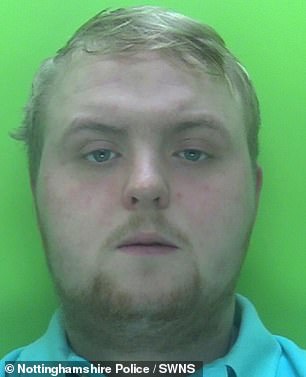 At a sentencing hearing at Nottingham Crown Court in July, Cameron Matthews, 22, left, was jailed for eight years and three months. But it was Kai Denovan, of Retford, right, who was found guilty of manslaughter after a trial – who instigated the attack, the judge said

‘Yes I can see that,’ Mr Sinnott replied, which the prosecution said provoked the attack.

Denovan, of Retford, was found guilty of manslaughter after a trial at Nottingham Crown Court.

He was jailed for 11 years, after Judge John Burgess told him he had ‘played a leading role in the group’.

It had been he who made the ‘joke’, and then thrown the first punch during an earlier incident in a pub, when he took exception to Mr Sinnott’s response.

After Mr Sinnott and his friends had walked away from further trouble, out of the pub and up the street, Denovan ‘pointed them out’, and reignited the earlier violence.

‘It was your grudge,’ the judge told him.

Jurors heard that Denovan ‘flew immediately into a rage’ after the footballer joined in with what Mr Sinnott had believed to be the defendant’s ‘self-deprecating humour’. 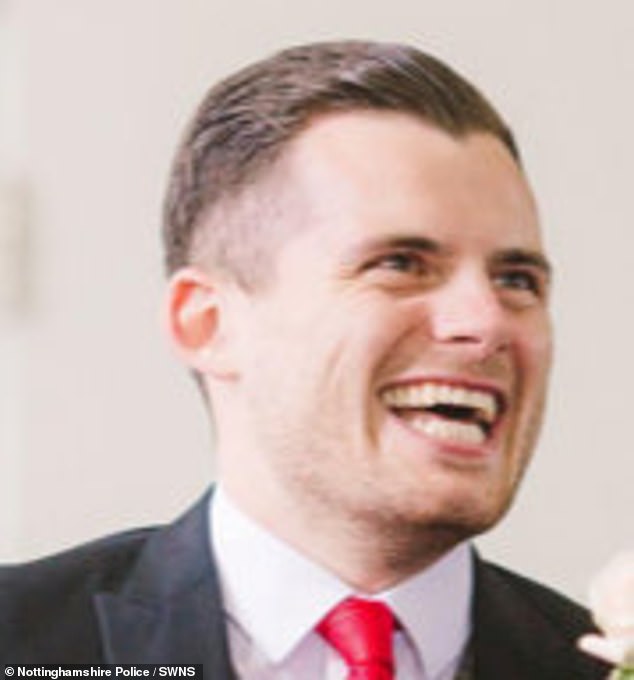 Matlock Town FC midfielder Jordan Sinnott died in hospital after suffering a fractured skull and brain damage in the assault in the centre of Retford, Nottinghamshire, in the early hours of January 25

During Denovan’s trial, the court heard that Cameron Matthews was ‘taking over’ from Denovan, who was ‘plainly hell-bent on trouble’ – and who had allegedly punched Mr Sinnott twice in the face inside the pub, called The Vine.

Prosecutor Michael Auty QC told jurors that Mr Sinnott was willing to apologise for any offence caused, but described Denovan, Matthews and a third man, Sean Nicholson, as a ‘pack hunting down and exacting retribution’.

Denovan caught Mr Sinnott with what one witness described as a ‘haymaker’, but it was Matthews, of Retford, who struck the fatal blows.

Matthews, 22, was jailed for eight years and three months after pleading guilty to manslaughter.

The third man, Nicholson, 22, of Retford, admitted affray in connection with the street brawl, and was jailed for 14 months.