Female octopuses have been caught on video launching shells at males attempting to mate with them.

Scientists at the University of Sydney recorded gloomy octopuses, or Octopus tetricus, in Jervis Bay in Australia with underwater cameras.

They watched them repeatedly throw marine debris using their siphon – a tube-shaped structure that can draw water in an out of its body.

As they have to move their siphon to an unusual position to do this, it is assumed to be a deliberate manoeuvre.

Throws were performed by both sexes, but it was female octopuses 66 per cent of the time, and sometimes occurred during mating attempts. 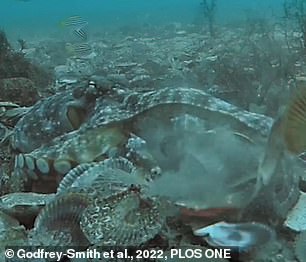 Scientists at the University of Sydney recorded gloomy octopuses in Jervis Bay in Australia with underwater cameras. They watched them repeatedly launch marine debris using their siphon – a tube-shaped structure that can draw water in an out of its body

Illustration showing how an octopus throws material. Left: Octopus holds shells, silt, algae or a mixture in its arms while preparing to throw. Its mantle is inflated ready to project water through its siphon. Right: The octopus brings its siphon down under the arm web and between the rear arm pair. It expels water through the siphon by contracting the mantle, and releases its held debris so it is projected through the water

The authors wrote: ‘Wild octopuses project various kinds of material through the water in jet-propelled ‘throws,’ and these throws sometimes hit other octopuses.

‘There is some evidence that some of these throws that hit others are targeted, and play a social role.’

For their analysis, published today in PLoS ONE, researchers recorded 24 hours of octopus footage in 2015 and 2016.

They identified 102 instances of debris throwing in a group of roughly 10 octopuses, where the chosen projectile was either silt, shells, algae or a mixture of them.

They first gather the object between their arms before expelling a jet of water from their siphon to push it through the water, sometimes to distances of several body lengths away.

OTHER ANIMALS THAT THROW OBJECTS

Chimpanzees – They throw sticks, stones and leaves at humans, baboons and other chimpanzees.

Capuchins – They throw stones at other capuchins.

Elephants – They throw mud, soil and vegetation at rhinos.

Polar bears – They throw ice blocks and rock at walruses and meat targets.

Egyptian vultures – They throw stones at eggs in nests.

Archerfish – They spit water at prey above and below the water.

Antlions –  They throw sand at their prey.

An octopus’ siphon is primarily used to help it breathe, by moving oxygenated water over its gills, but they will also use it to propel themselves away from predators.

Previous studies have noted them use it to clear debris from their den area, but the researchers say that directing the jet under their arm-web as in the videos is ‘unusual’.

Around half of the observed throws occurred during or around the time of interactions with other octopuses, like arm probes or mating attempts.

This suggests it is a social behaviour, and, in the cases of it occurring during mating, could also be used to manage sexual interactions.

About 17 per cent of throws hit other octopuses, and in many cases occurred within sequences of aggressive interactions.

Octopuses are able to change their skin colour, which they do for camouflage, but can indicate aggression if particularly dark.

The researchers found that dark-coloured octopuses tended to throw with more vigour and force, and were also more likely to hit another octopus.

The authors wrote: ‘The octopus who was hit often altered its behavior in anticipation or reaction to a throw; octopuses in the line of fire ducked, raised arms in the direction of the thrower, or paused, halted or redirected their movements.’ 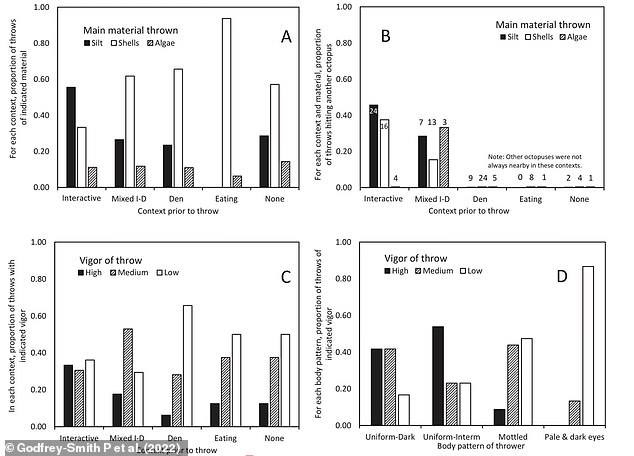 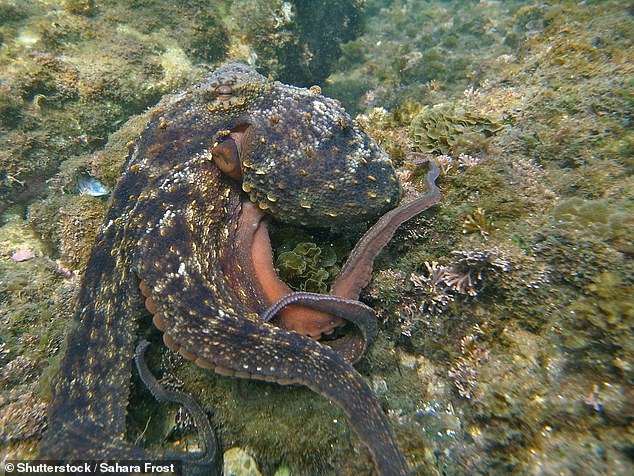 This is the first report of any octopus species throwing debris, in a social context or elsewhere, but the scientists do admit that the intention of the throws is not clear (stock image)

This is the first report of any octopus species throwing debris, in a social context or elsewhere, but the scientists do admit that the intention of the throws is not clear.

For example, it could merely be a happy coincidence if one octopus’s debris struck a rival while they were cleaning their den, rather than a deliberate attack.

However, the awkward arm arrangements and the incidences of silt throwing during social interactions do suggest intent, and the ability to choose a target.

‘Octopuses can thus definitely be added to the short list of animals who throw or propel objects, and provisionally added to the shorter list of those who direct their throws on other animals,’ the authors wrote,

‘If they are indeed targeted, these throws are directed at individuals of the same population, and octopuses then join a small collection of social mammals in this rare form of nonhuman throwing.’

Octopuses have a ‘favourite arm’ they use to grab prey

A study has shown that, despite having eight arms to choose from, octopuses also have favourite appendages.

Researchers from the University of Minnesota recorded octopuses attacking various prey, and found they preferred certain arms over others when hunting.

The team hopes the findings could be used to develop next-generation, highly manipulative soft robots.

‘If we can learn from octopuses, then we can apply that to making an underwater vehicle or soft robot application,’ said Dr Trevor Wardill, an author of the study.