A female electrician has said she loves everything about her job – except the male customers doubting her ability.

Bethany Andrews, 24, an industrial electrician, from Kent, UK, had concerns about embarking on a career in an industry which is heavily male-led.

Despite encouragement and continued support from her family and friends, Beth has had to deal with negative sexist comments.

She’s even had to deal with incidents where male customers will demand a second opinion, believing her expertise is lacking due to her sex.

Bethany Andrews, 24, an industrial electrician, from Kent, has said she loves everything about her job – except the male customers doubting her ability 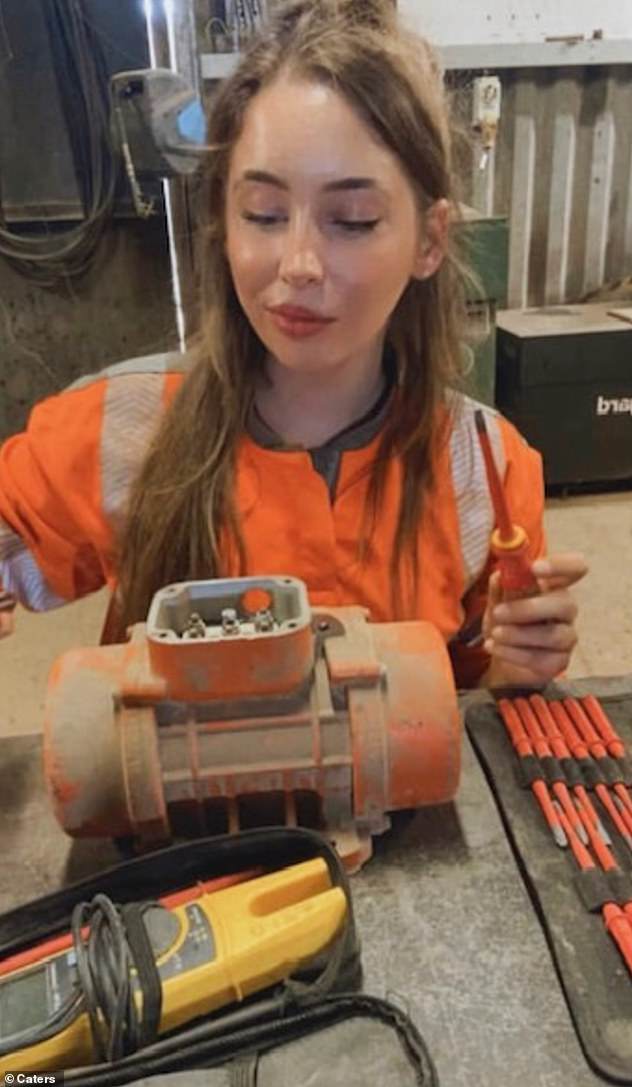 A female sparky: Beth says she loves working as an industrial electrician and feels she is inspiring a new generation of younger women to try the job 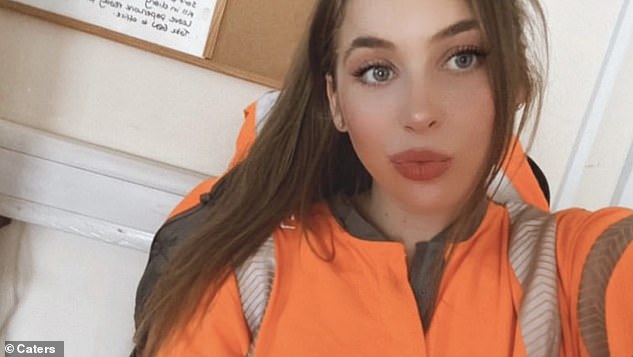 Beth said: ‘I’ve had customers doubt my ability. When I diagnose a fault and tell them the outcome, they say they want a second opinion. I don’t know if it’s because I’m female or that I’m young – or both?

‘I also get the “why aren’t you making sandwiches” comment however, being in this industry, you need thick skin, so I’m not bothered by the remarks.

‘And I get the odd stare that lingers a bit too long and makes me feel uncomfortable.’

However, her thick skin has helped her thrive in her career and Beth is inspiring a future generation of females to choose this industry for their profession. 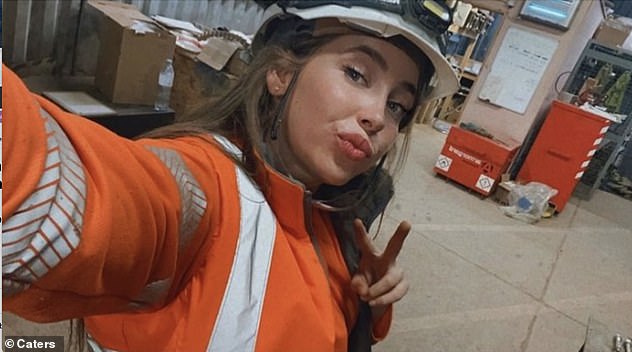 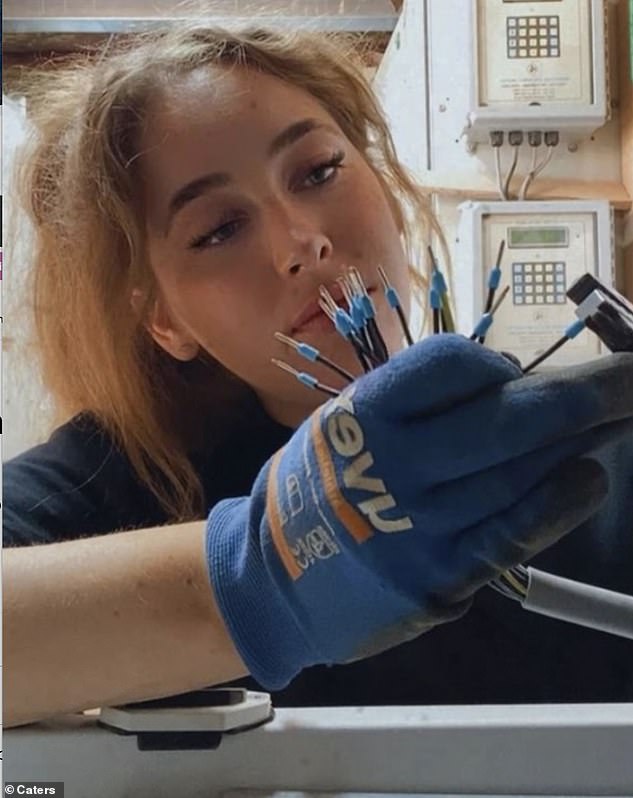 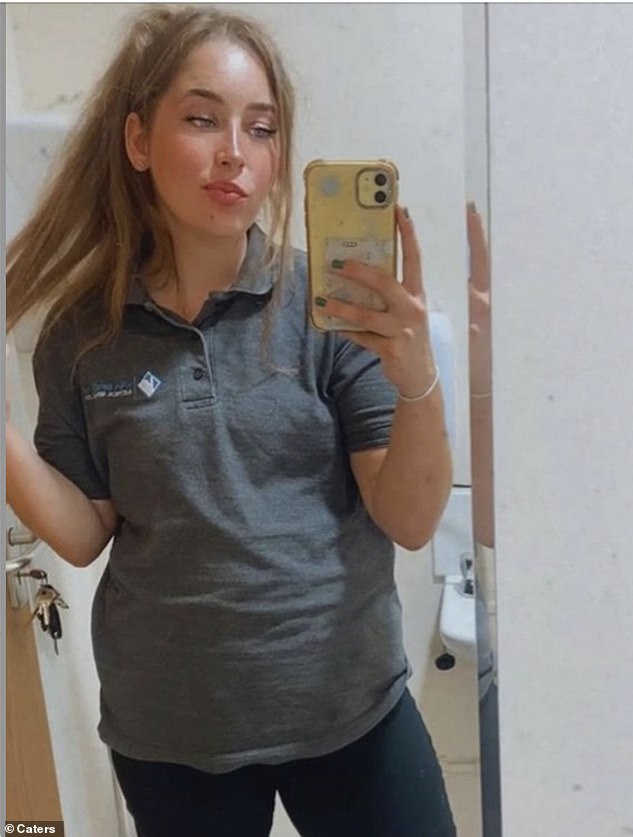 Beth initially went to college to study travel and tourism, but then a friend said she wasn’t fulfilling her potential so she changed course 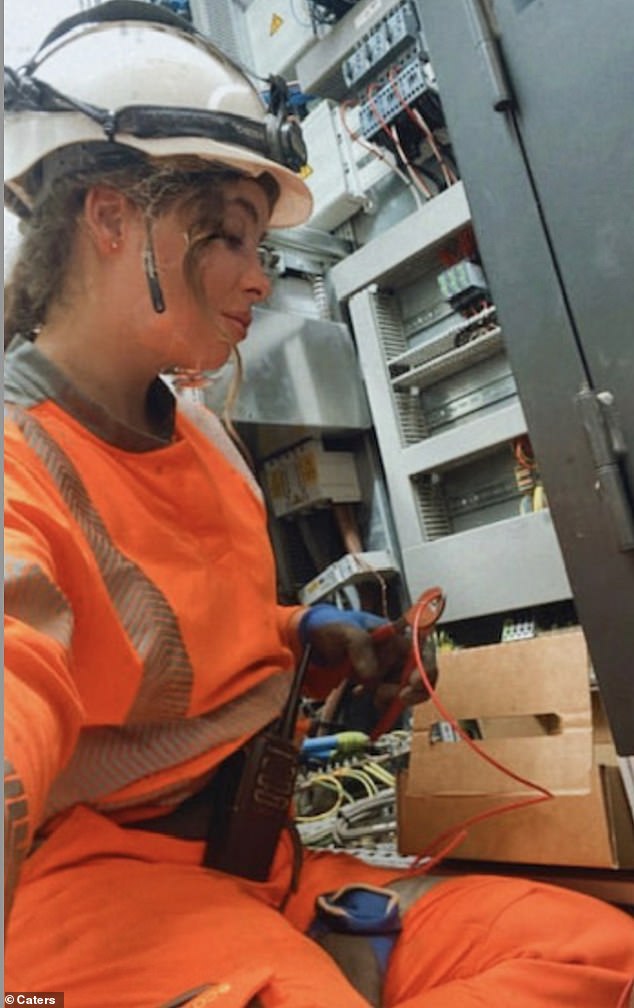 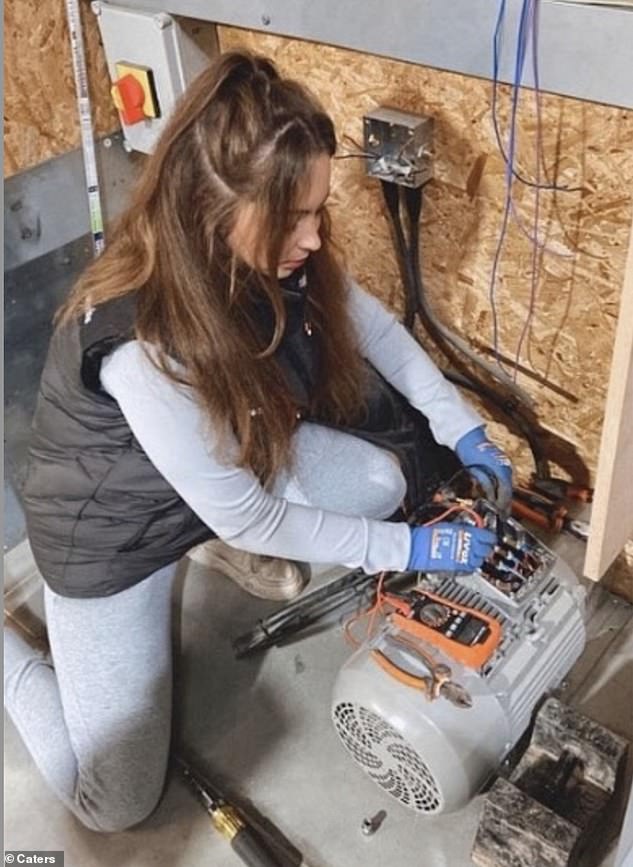 Recently she has stepped into the world of social media creating an Instagram page @beth_electrical dedicated to her journey as a female electrician, which she states has made her more confident.

Beth said: ‘I only started my account in January this year. I’ve never been one for social media so this was really stepping out of my comfort zone.

‘Generally, most people are very respectful and make me feel welcome.

‘Most people are on social media are lovely and I’ve been getting messages from other women saying I’ve inspired them to get into the trade which is so heart warming.’

Beth also states the older generation who work in the same industry have welcomed her with open arms.

She said: ‘Before I started, I was concerned there would be a stigma and strong beliefs against me in this role, especially from the older people on site as they are from a generation where the woman traditionally stays at home and cooks whilst the man goes to work.

‘I shouldn’t have made this presumption as they’ve been so welcoming and have taught me so much. Even my work bestie is of that generation.

‘I usually work on my own, but on the occasion, I’m working with someone else, we’ll have a laugh and get the job done. It’s a really good atmosphere.’ 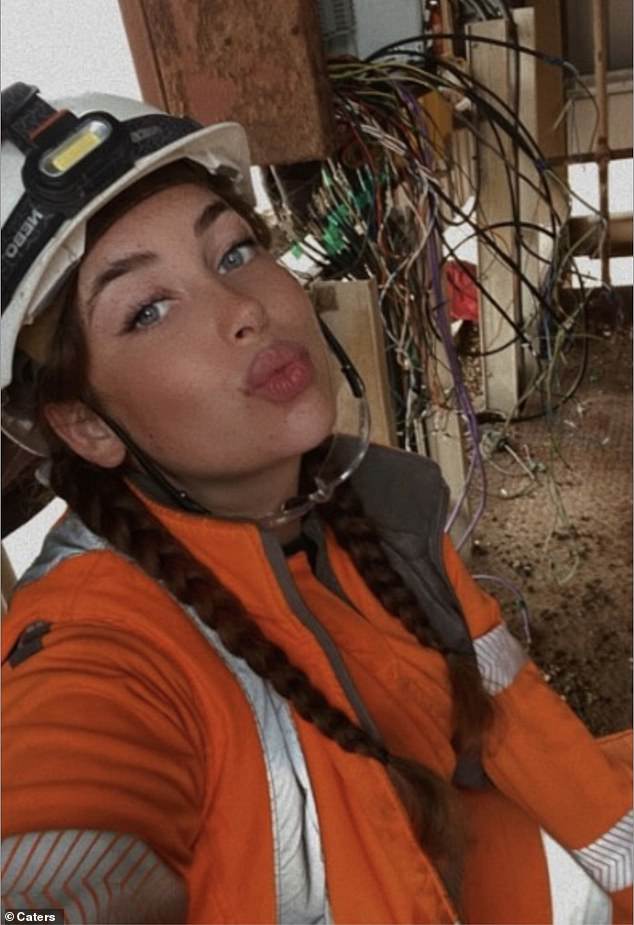 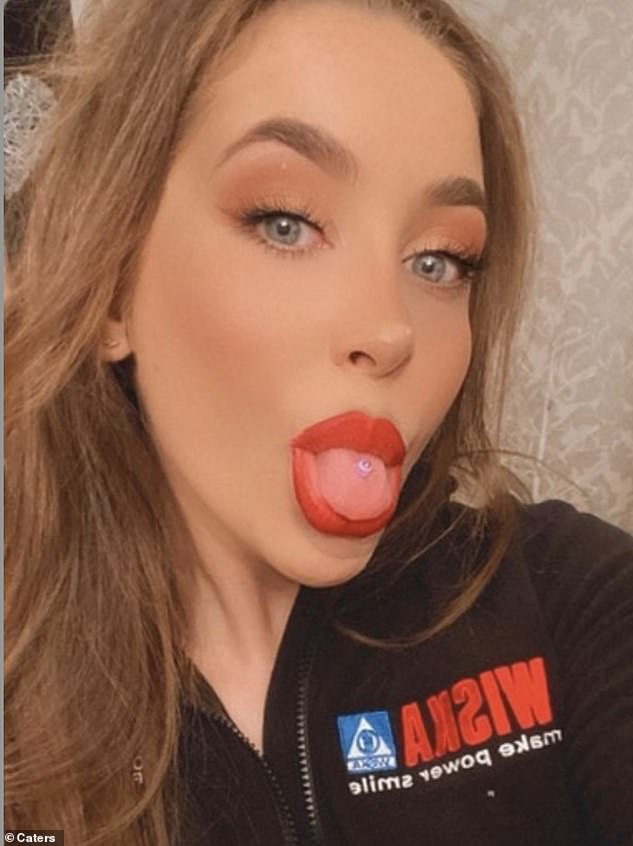 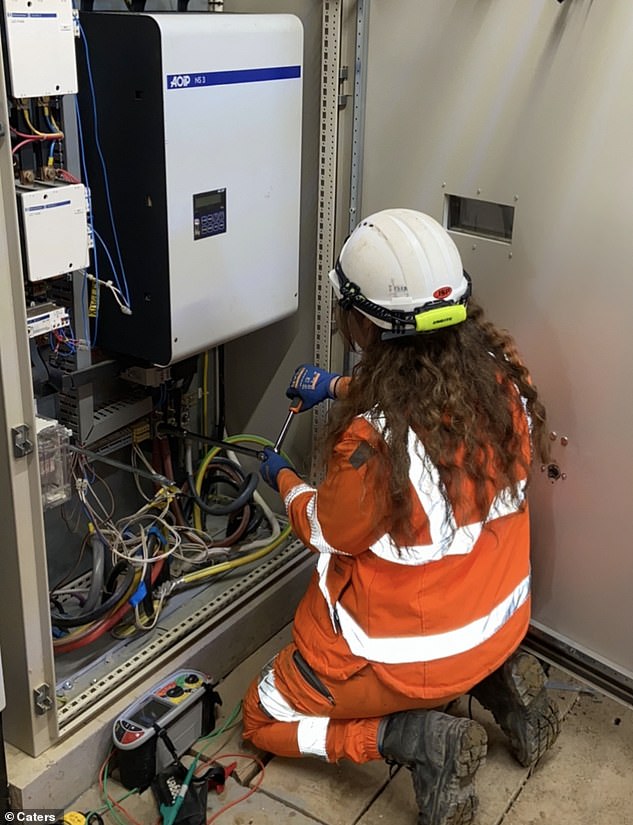 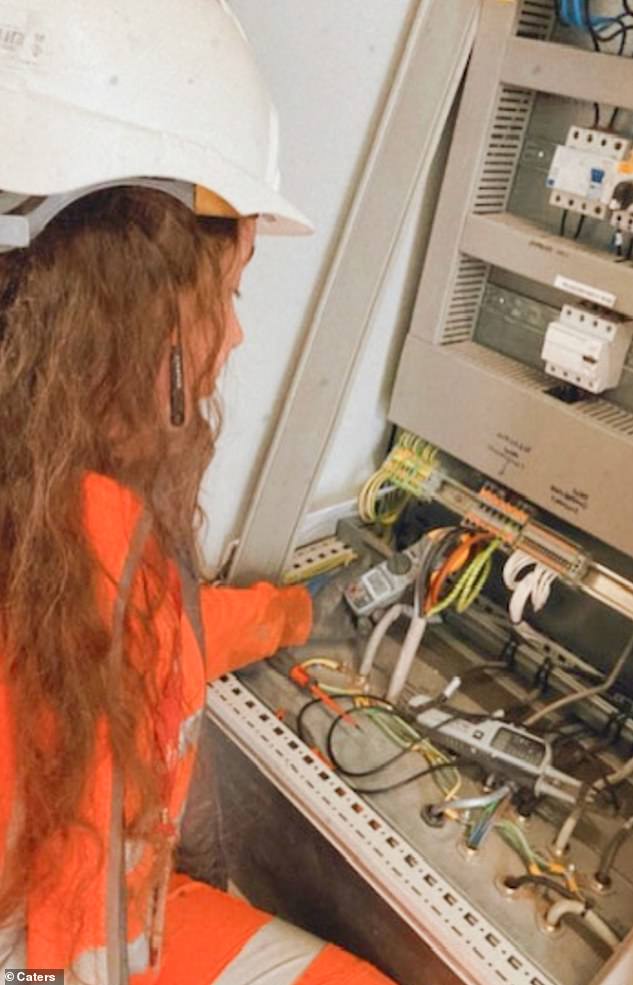 Beth at work: She says the older generation have welcomed her with open arms and been very supportive 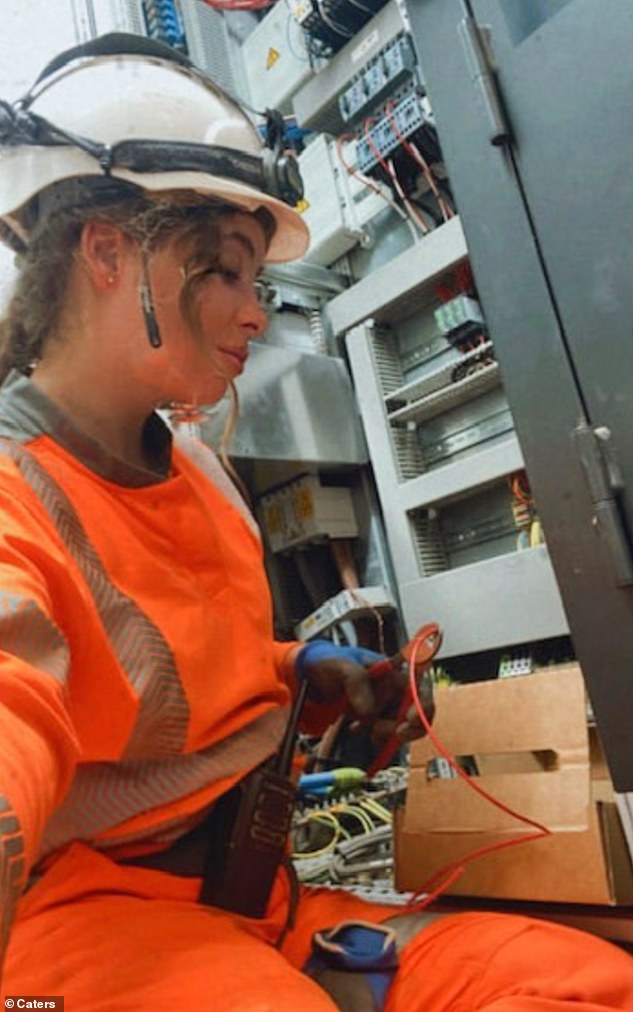 Beth comes from a family of mechanics and engineers, with relatives working on the railways or being domestic electricians

Beth said her love for electrics runs in the family.

She said: ‘When I was a kid, I would play with JCB plastic tools as well as barbies. So I think there was always something in me that liked the idea of construction.

‘And I have motor mechanics and engineers in my family.

Revealing how she finally decided to embark on this career, Beth said she beat a whole heap of lads to wire up a plug in the fastest time.

She said: ‘I decided to study travel and tourism, but in the summer holidays between starting college, my friend said she thought I had more potential and should choose something else.

‘I phoned the college and asked to change my course to electrical installations.

‘I went to an open day and for some reason I dragged my friends along with me to the electrical department.

‘I had to wire up a plug and I did it in the quickest time out of everyone.’