What do Heidi Klum, Carrie Fisher, Madonna, Andie MacDowell, Kate Moss and Meryl Streep all have in common?

Other than being some of the biggest names in showbiz, this select group of proud mothers all have daughters who have followed them into their chosen profession.

German model Heidi Klum and her mini-me daughter Leni turned heads this week, sporting next to nothing in a playful campaign for lingerie brand Intimissimi.

At just 18, Leni, who is the daughter of Heidi and Italian businessman Flavio Briatore, has already posed for Vogue and is the latest famous daughter to try her hand at the same career as her mother.

German model Heidi Klum and her mini-me daughter Leni have turned heads this week, sporting next to nothing in a playful campaign for lingerie brand Intimissimi

Kaia Gerber, 21, shares a striking resemblance with her mother, 90s supermodel Cindy Crawford, 56, which has served her well in her modelling career.

Onscreen, a number of up and coming actresses have been flaunting their impeccable pedigree, with Louisa Jacobson, Meryl Streep’s daughter, starring in the HBO period drama The Gilded Age, and Andie MacDowell’s daughter Margaret Qualley being met with critical acclaim for her performance in Maid on Netflix.

Meanwhile, Madonna’s daughter Lourdes Leon is all grown up at 26 and is enjoying a flourishing music career, with hopes of topping the charts for decades just like her mother did.

Here FEMAIL takes a look at the daughters who were not afraid of their mother’s shadows and decided to try their hand at the same careers. 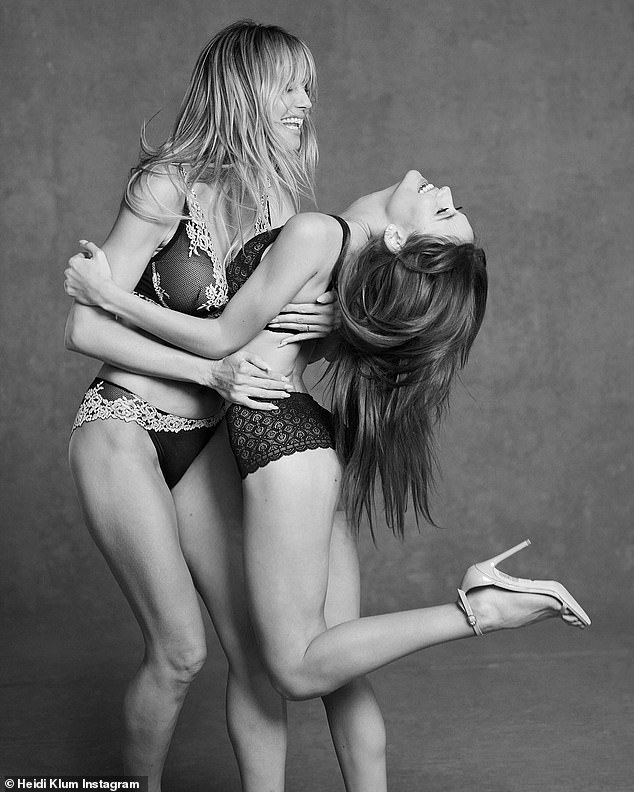 Heidi declared in 2020 that Leni was old enough to decide whether she wanted to model. And the beauty is already making waves in the fashion world 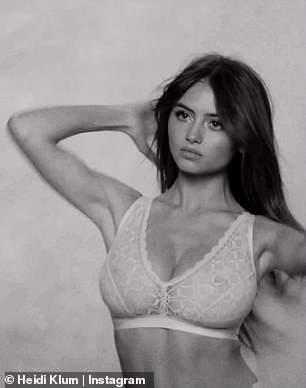 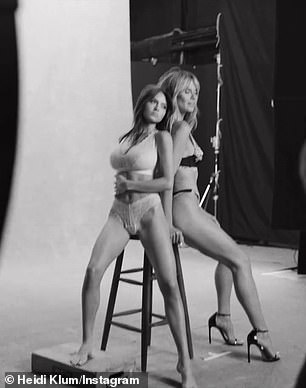 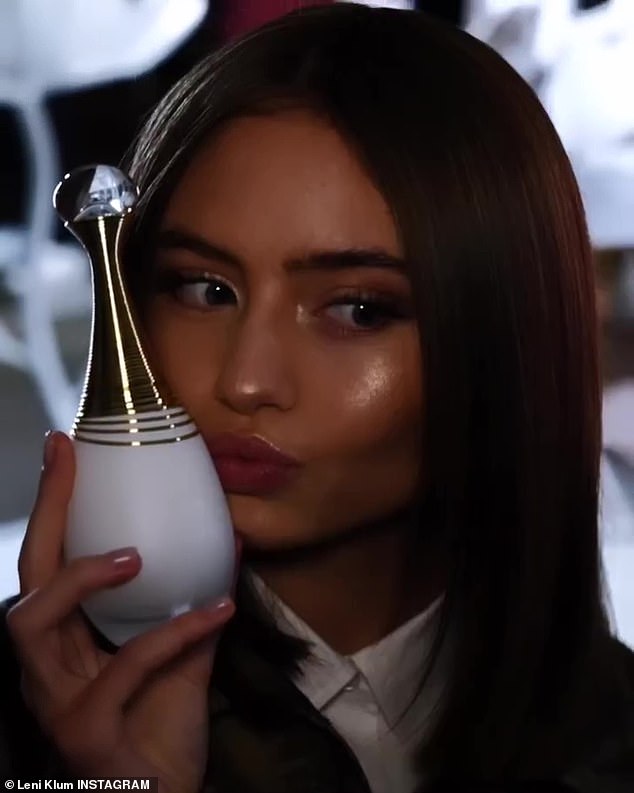 Leni and her mother looked sensational in the campaign for Intimissimi, with the brand caption the pictures shared on social media: ‘Like mother and daughter. Every woman has a special place in her heart for her favorite lingerie.’

Leni was raised by Heidi and her former husband, the singer Seal, away from the spotlight, but voiced her desire to start a modelling career when she was 16.

Heidi turned down modelling work for Leni when she was younger, in order to give her daughter privacy, but she revealed in 2020 that Leni was now old enough to do what she wanted.

‘I always thought she was too young. We always also decided to keep the children out of the public eye,’ the former Victoria’s Secret Angel told People.

Heidi continued: ‘But she’s driving a car now, she’s 16, so I figured if you can do that, you can also model now if this is what you wish to do.’

‘I think it’s very interesting to her,’ the American’s Got Talent judge noted. ‘When you’re that age you’re still trying to figure out who you are, what you want to be and kind of see for the first time what are all these different jobs to make a TV show happen.’

At just 18, Leni has already posed for Vogue Germany and Glmaour Germany and landed a campaign with Michael Kors earlier this year, making her illustrious mother proud. 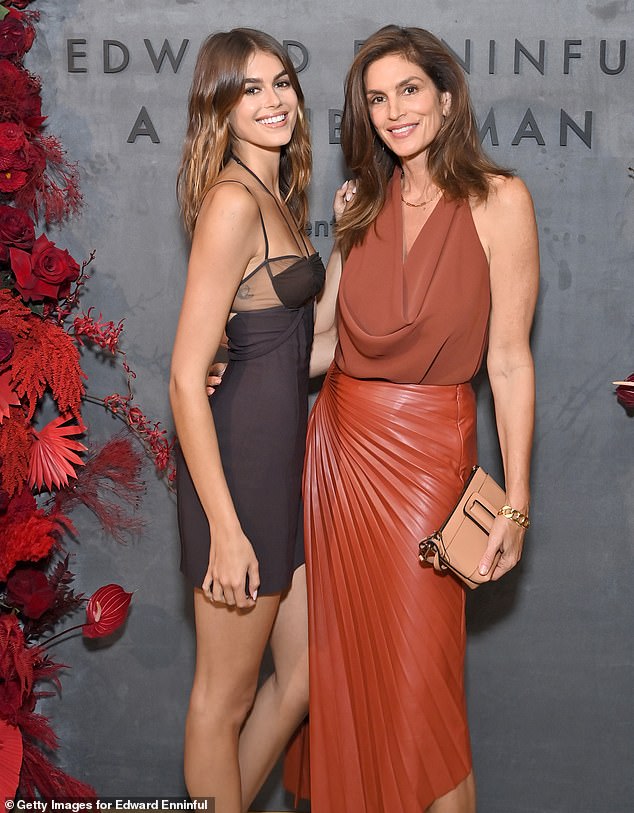 Kaia Gerber is one of the modelling works’ most bankable models, just like her mother Cindy Crawford was in the 1990s

But Leni isn’t the only daughter of a high-profile model to follow in their mother’s footsteps – as Kaia Gerber has joined the ranks just like Cindy Crawford.

Gerber secured her first modeling gig aged 10 by posing for no less than Young Versace and later signed with the IMG modelling agency.

From then on, she carefully added to her modelling resume, including posing for Vogue Paris, and Valentino, Chanel and Saint Laurent.

She made her catwalk debut in 2018, strutting her stuff on the runway for Calvin Klein in New York.

Just like her mother before her, Kaia is now a respected figure of the modelling world.

In 2019, Town And Country called Crawford a ‘modelling matriarch’ and praised her for raising a clan of models that included Kaia and her brother Presley.

‘They have agents, but I would say for the first year, for sure, everything was 100 percent through me,” the supermodel said at the time.

‘Eventually I want to empower them to be in charge of their own careers, but they’re not ready for that yet. Right now they’re mostly, “Mom, just tell me what to do”,’ she added. 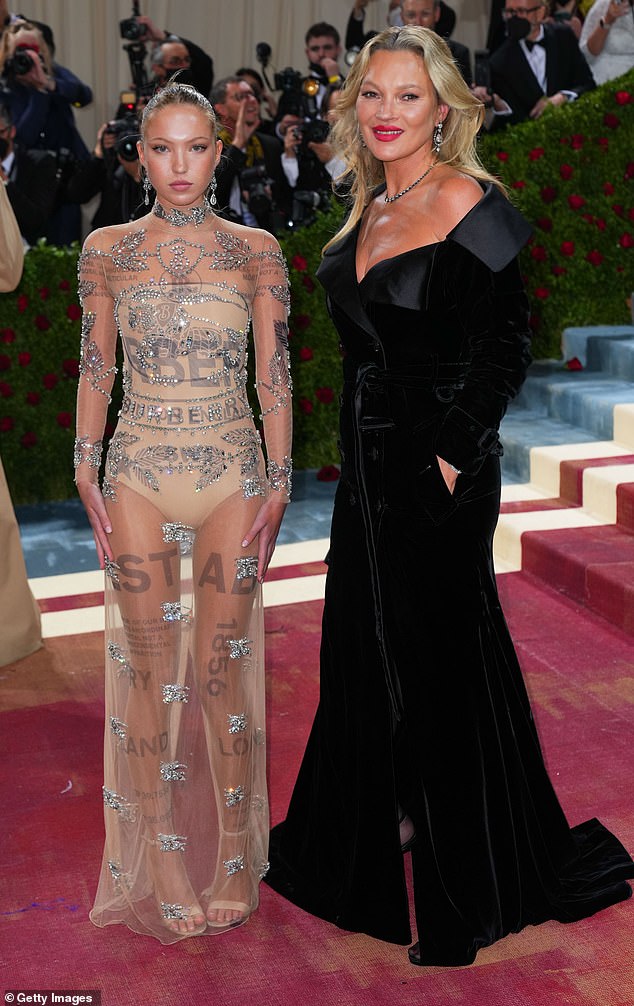 Lila Moss has followed in her mother Kate’s modelling footsteps. Lila pictured and her mother at the Met Gala on May 2, 2022 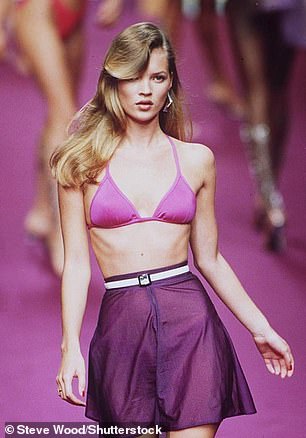 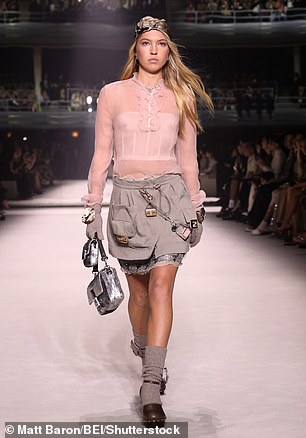 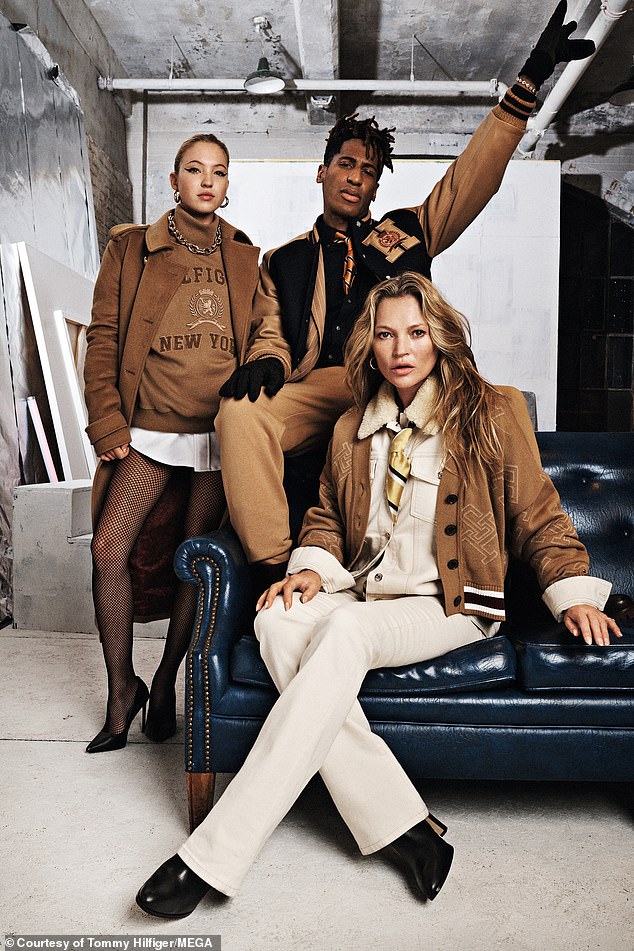 Across the pond, Kate Moss’s daughter Lila is also becoming a modeling powerhouse, collecting shows and campaigns on her ever growing resume.

The blonde beauty, who has inherited her mother’s good looks and lives with type one diabetes, has been the toast of the latest fashion week, walking for Tom Ford in New York where she proudly showed her insulin pump.

Lila, 20, was hailed ‘an inspiration to so many living with Type 1 diabetes’ after wearing the pump on the runway in September 2021 and at the Met Gala in May.

Kate, who was the 90s and noughties ultimate British Hit Girl, has been watching her daughter ascend to fame in her own right, noting to Vogue in September that Lile was ‘very studious.’

In fact, mother and daughter shared the limelight in a recent campaign for Tommy Hilfiger where they posed up a storm with Blind 182’s Travis Barker.

And just like Kate, who designed her own collection for Topshop in 2007, before the high street giant closed down, Lila is just as interested in designing clothes as she is in modelling them.

It was revealed last week that she landed a spot at the prestigious Parsons School of Design in New York.

Alumni of the fashion institution include Donna Karan and Marc Jacbos, to name a few. 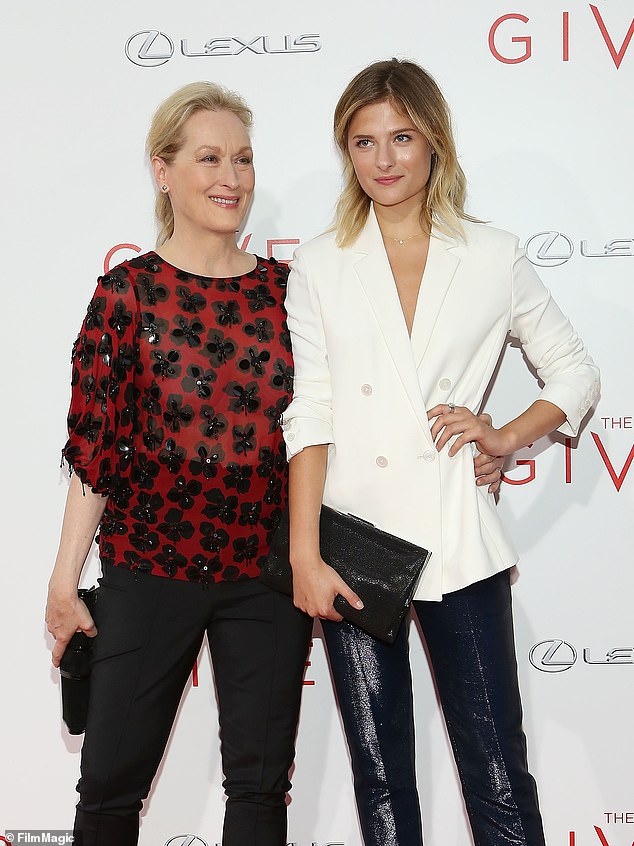 Louisa Jacobson has also followed into the footsteps of her award-winning mother Meryl Streep and landed a role in HBO’s The Gilded Age earlier this year. Pictured in 2014 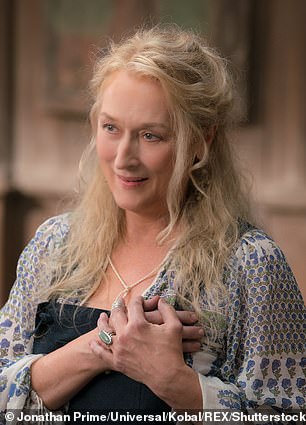 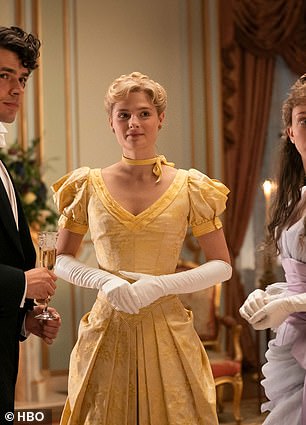 The blonde beauty, who is Meryl’s daughter from her marriage with sculptor Don Gummer, has talked candidly about the pressure that came with joining the same career as her award-winning mother.

‘It’s going to be a constant thing throughout my life,’ she told Tatler in August, adding: ‘It has been since I can remember – this issue of “Do I deserve what I have?”

While she was interested in theatre from a young age, the actress revealed she did not always destine herself to a career in drama. In fact, she studied psychology at university and worked in retail selling handbags after graduation.

Eventually, after scoring a job in advertising, her love of acting persisted and she began to audition on her lunch breaks, before joining a three-year drama course she said was the best time of her life. 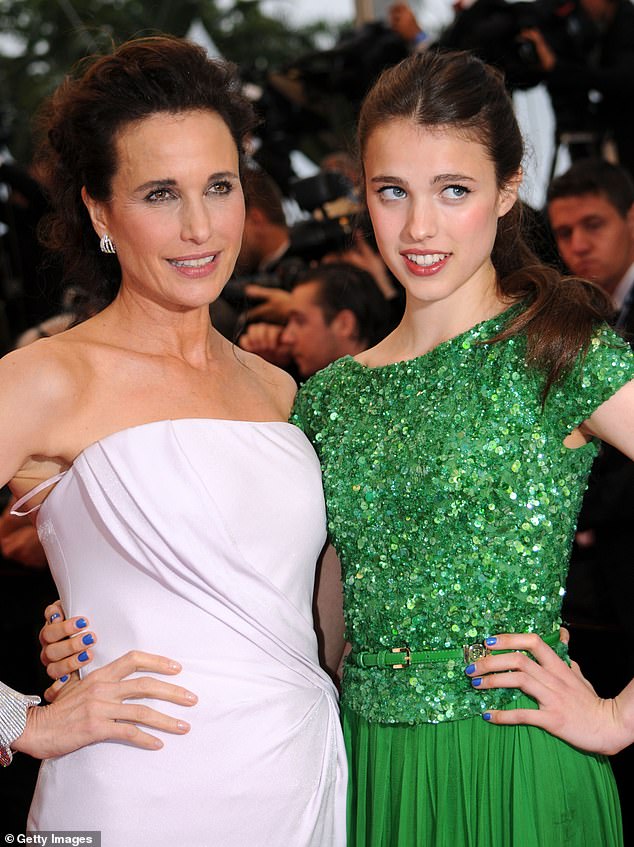 Last year, it was Andie MacDowell’s daughter, Margaret Qualley, who made headlines thanks to her role in a Netflix show 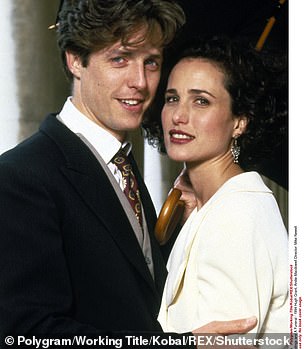 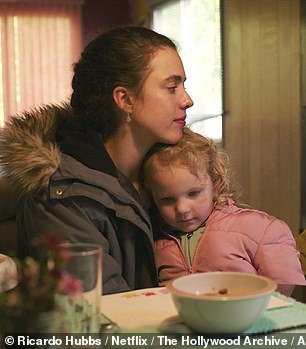 Margaret’s performance in Maid earned her to be nominated for an Emmy earlier this summer (right and left, Andie in Four Weddings and a Funeral)

Last year, it was Andie MacDowell’s daughter, Margaret Qualley who made headlines thanks to her role as Alex in Netflix Maid, a tough drama based on the memoirs of Stephanie Land: Maid: Hard Work, Low Pay, and a Mother’s Will to Survive.

Margaret’s mother needs no introduction. From her breakout role as Carrie in Four Weddings and a Funeral to Rita in Groundhog day, the American actress has captured the imagination of audiences throughout her career.

Fittingly, Macdowell played Alex’s mother in Maid, but the budding actor is making waves in her own right.

Her performance in Maid was applauded by critics, and saw her nominated for an Emmy.

In 2019, Margaret’s character Pussycat was one of the stand out supporting roles of Quentin Tarantino’s Once Upon a Time in Hollywood, which launched her career.

She is multiplying projects, including one opposite Joe Alwyn in the upcoming thriller Stars at Noon, and an appearance alongside Emma Stone in AND, from Yorgos Lanthimos, who directed The Favourite.

However, the actress is still finding her pace in the industry. Speaking of the Tarantino movie, she told AnotherMag:  ‘You forget that you’re supposed to be messy. 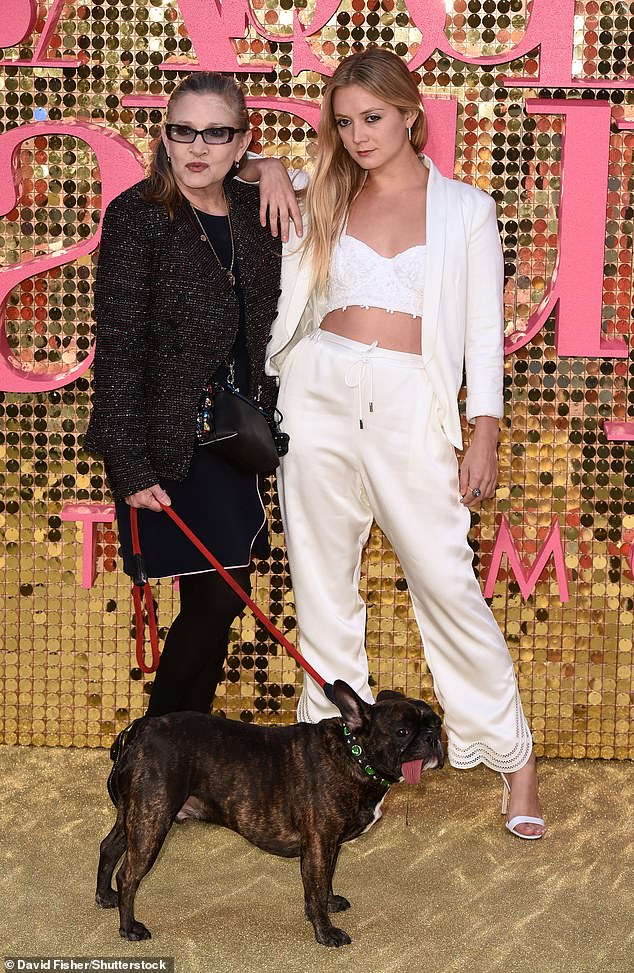 Like mother like daughter! Carrie Fisher’s daughter Billie Lourd’s first acting job was in a Star Wars movie (pictured in 2016) 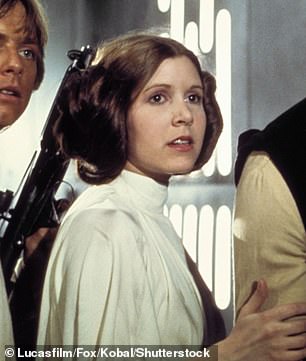 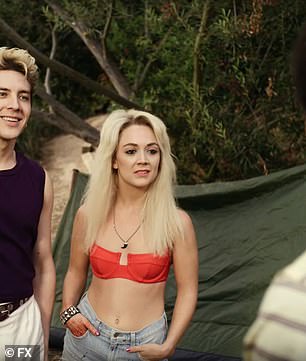 Billie’s mother, Carrie Fisher, who was revered for playing Leia in the sci-fi classic, began her own career in the shadow of the silver-screen star Debbie Reynolds (left). Lourd is a regular cast member on Ryan Murphy’s American Horror Story. Pictured in American Horror Story: 1984 (right)

Meanwhile, Billie Lourd, the daughter of the late Carrie Fisher, is still juggling a healthy TV career with her happy family life.

Billie’s mother, Carrie Fisher, who was revered for playing Leia in the sci-fi classic, began her own career in the shadow of the silver-screen star Debbie Reynolds.

Reynolds was a contemporary of Judy Garland and was a triple threat, combing acting, dancing and singing all-in-one.

She was most famous for her starring role in the musical Singing in the Rain, where she played opposite Gene Kelly.

Tragically, mother and daughter died one day apart, with Carrie dying of sudden cardiac arrest on 27 December 2016, and Debbie passing away from a stroke the next day.

It was fitting that, as the daughter of Princess Leia herself, Billie’s first acting gig was a small role on the latest Star Wars trilogy, playing Lieutenant Connix in The Force Awakens, a role she reprises throughout the saga.

She collected a few movie credits in the late 2010s, including in Olivia Widle’s popular Booksmart, however, in on TV that her career is truly blossoming.

Billie, a mother-of-two, has joined the ranks of TV producer Ryan Murphy’s go to actors when she appeared on his shortly series Scream Queens in 2015.

This landed her a steady stream of appearances on the producer’s American Horror Story series after joining the show’s seventh season. 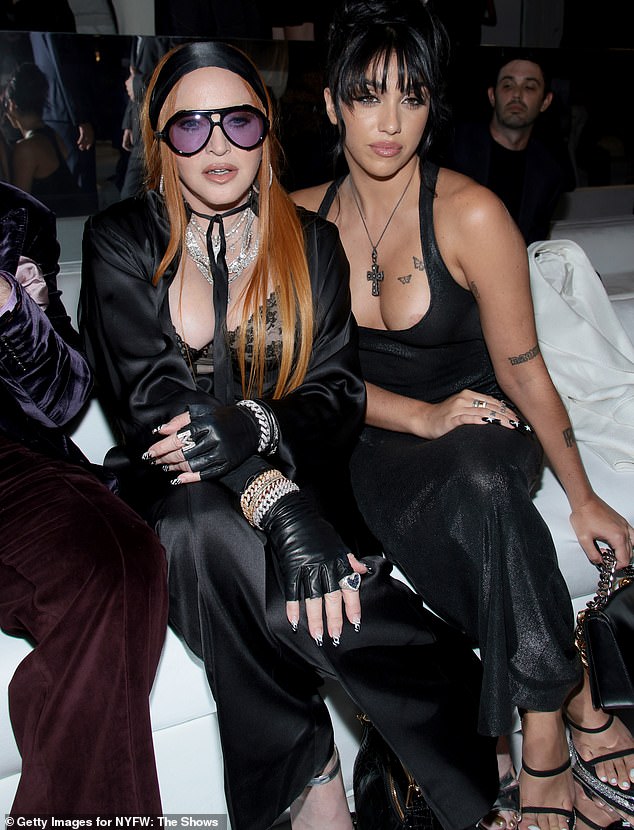 Meanwhile in the music world, Madonna has found a heir to her pop empire in her daughter Lourdes Leon, 25, who is launching herself into music.

Lourdes, who releases her music under the name Lolahol, released her first single in August and followed up with a new song, Love Me Still, last week.

The song was accompanied by a seductive music video featuring Lourdes, showing that the budding singer has taken a page or two from her illustrious mother’s playbook.

Sharing a clip of the video on her social media, the artist said: ‘So blessed to be surrounded by my family on this journey,’ suggesting her mother is supportive of her music career.

Lourdes, who also works as a model, has returned to singing after telling Interview Magazine last year that she ‘didn’t care about singing.’

She said at the time: ‘As for music, I can sing. I just don’t care about it. Maybe it’s too close to home.’

It looks like the artist has changed her tune, and these two releases suggest she might be set on following into her famous mother’s footsteps.