Greens leader Adam Bandt has been brutally shut down by an ABC News Breakfast presenter after claiming the party’s vote is growing.

Mr Bandt claimed the party was ‘running strongly in the Senate and it’s critical that people vote Greens … But out vote is growing and our-‘.

‘It’s not really’, Millar cut him off.

ABC News Breakfast host cut off Adam Bandt – pointing out the Greens vote has been stuck in neutral, according to the latest Newspoll

‘Hang on, just on that point Adam Bandt, because Newspoll continually puts you at 10 per cent without a lot of change. So why do you suggest your vote is growing?’

‘Well at all of the state and territory elections we’ve had during the course of this parliament, our vote in Tasmania increased – we were the only party in Tasmanian parliament whose vote increased,’ he replied.

Bandt referred Millar to one poll that was a ‘state breakdown’ of Queensland run that suggested the Greens vote was as high as 14%.

The Greens leader said there would be a power-sharing Senate, and that the Greens should get the balance of power.

‘The Greens will be in balance of power in the Senate and who we will put on the table after the election is tackling the climate crisis by stopping the opening of new coal and gas mines,’ he said. 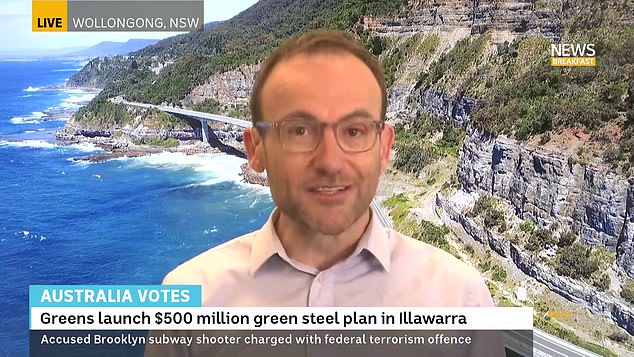 The icy exchange comes as Mr Bandt recently shut down a journalist’s ‘gotcha’ question at the National Press Club on Wednesday.

During the Q&A session after he gave his speech at the event, Mr Bandt was asked a question by journalist Ron Mizen from the Australian Financial Review about a corporate profits tax, but then ended his question with a gotcha.

‘You said in the speech that wages growth wasn’t going particularly well. What’s the current WPI?’ he asked.

‘Google it, mate!’ Mr Bandt replied, to laughter from the audience.

The question referred to the Wage Price Index, which measures changes over time in labour costs – wages and salaries. 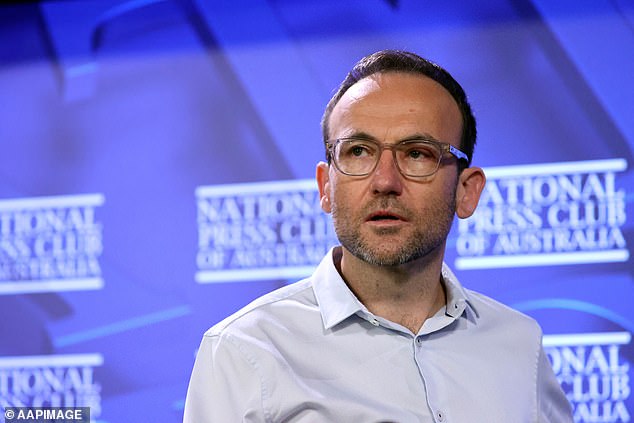 ‘Google it, mate!’ responded Australian Greens leader Adam Bandt when asked a ‘gotcha’ question by a journalist at the National Press Club on Wednesday

‘If you want to know why people are turning off politics, it’s because… what happens when you have an election, [it] increasingly becomes this basic fact-checking exercise between a government that deserves to be turfed out and an Opposition that’s got no vision, he said.

‘News flash! Most of the people in Canberra are on six figure salaries just passing time until they go out and work for the coal and gas corporations and get a six or seven-figure lobbying job.’

Mr Bandt went on to list reforms he said would better demonstrate Federal politicians were in touch with the electorate, such as lifting the minimum wage. 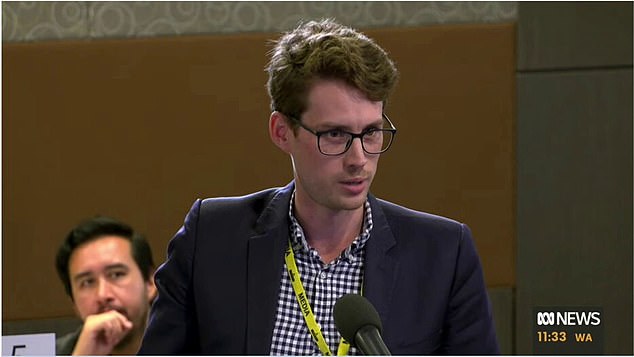 Journalist Ron Mizen from the Australian Financial Review (pictured) asked about a corporate profits tax, but then ended his question with a gotcha asking about a wages stat 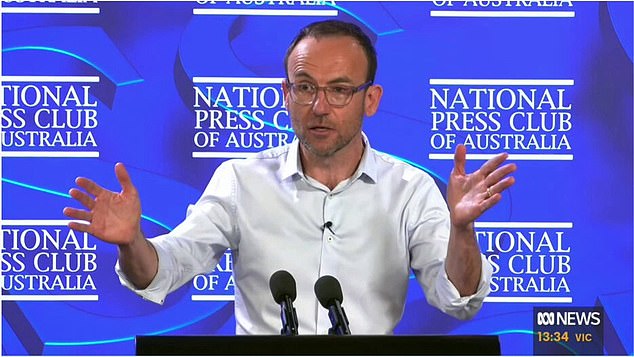 But the audacious plan – which would cost billions and change Australia as we know it – is mostly pie in the sky with the party only holding one seat in the House of Representatives.

In the latest Newspoll ahead of the May election the Greens have a primary vote of 10 per cent which is the same as their 2019 result.

Last week the Greens announced they would spend at least $66billion of taxpayers’ money to wipe all student debt and leader Adam Bandt is set to announce more big-spending plans in the coming weeks.

‘Student debt should not be an added burden on people who are already struggling, especially after the impacts of the pandemic,’ said Education spokeswoman Mehreen Faruqi. 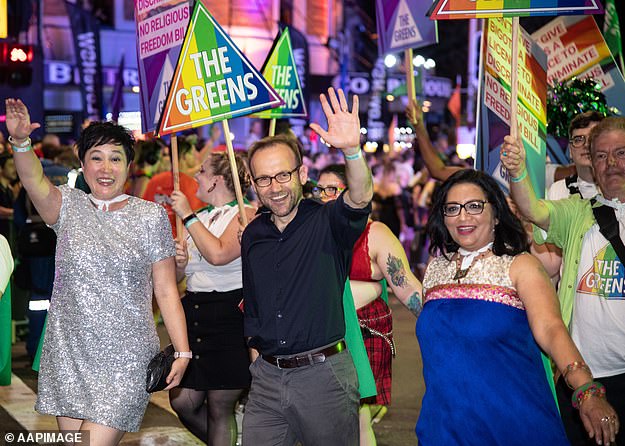 The Greens are promising to scrap all student loan debts if the party is able to secure the balance of power at the federal election. Pictured: Leader Adam Bandt

‘Many current MPs, including the Prime Minister, went to university when it was free, but now students are being saddled with tens of thousands of dollars in study debt that often takes decades to repay.’

University was free in Australia from 1974 but fees were re-introduced in the 1980s.

The Greens believe drug use should be treated as a health issue, not a criminal issue.

They would legalise, tax and regulate cannabis, fund pill testing at festivals and establish safe injecting facilities in each capital city.

The Greens want to set up a regulated cannabis market with an Australian Cannabis Agency to issue licences for production and sale and ensure quality. 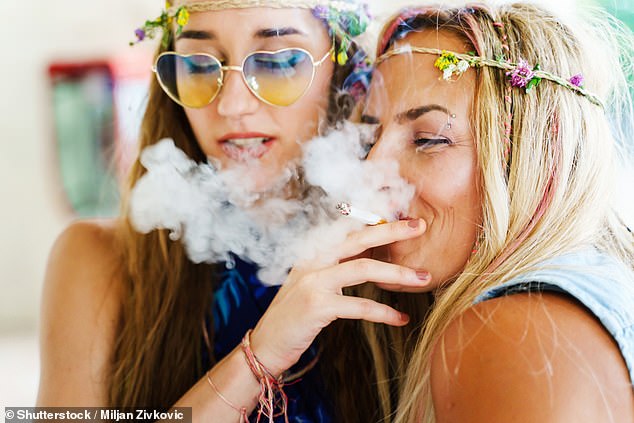 The Greens believe drug use should be treated as a health issue, not a criminal issue

Aussies would be allowed to grow six plants at home for personal use but there would be big fines for selling without a licence.

Adverts for the drug would be banned.

‘The major parties in this countries are intent on pushing forward a policy that criminalises drug users, supports an unregulated and dangerous market and makes people fear seeking help when they need it,’ the Greens say on their website.

The Greens want to immediately ban the construction of new coal, oil and gas infrastructure.

Their target is to phase out the mining, burning and export of thermal coal by 2030.

They also want to stop subsidies for fossil fuel companies, ban political donations from these industries and re-introduce a carbon price. 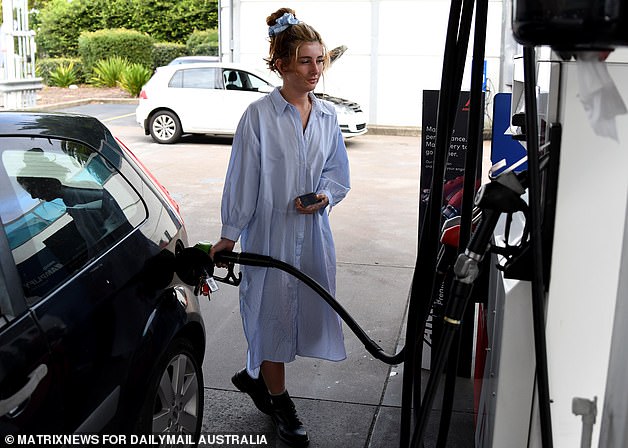 The Greens would also end the sale of new petrol and diesel cars from 2030, subsidise electric cars and build charging stations across the country

They would spend billions on renewable energy and storage to make sure Australia’s electricity comes from 100 per cent renewable sources.

The Greens would also end the sale of new petrol and diesel cars from 2030, subsidise electric cars and build charging stations across the country.

They want to spend $25 billion on more rail and bus services and build a high-speed rail line from Melbourne to Brisbane.

The Greens want to make dental care free at the point of use under the Medicare system.

They would also spend $4.8billion to provide unlimited psychologist or psychiatrist mental health sessions under Medicare. 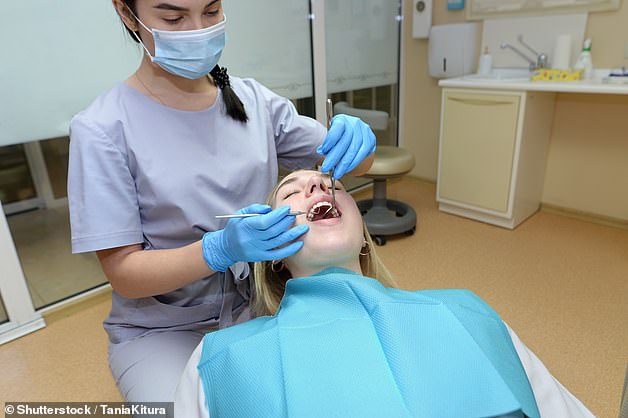 The Greens want to shake up parental leave to give parents 26 weeks off.

Their plan involves giving each parent six weeks off on a ‘use it or lose it’ basis and another 14 weeks on top of that for a couple to share between them.

The leave would be paid by taxpayers at the carer’s wage up to $100,000 per year, instead of at minimum wage.

There would also be superannuation paid on all parental leave.

The Greens want to make the minimum wage 60 per cent of the median wage.

The Greens – who call their defence spokesman the peace and disarmament spokesman – want to slash defence spending to 1.5 per cent of GDP.

They want to cut down on guns and tanks and instead maintain a ‘light, readily deployable and highly mobile force that meets the needs of our place in the world’. 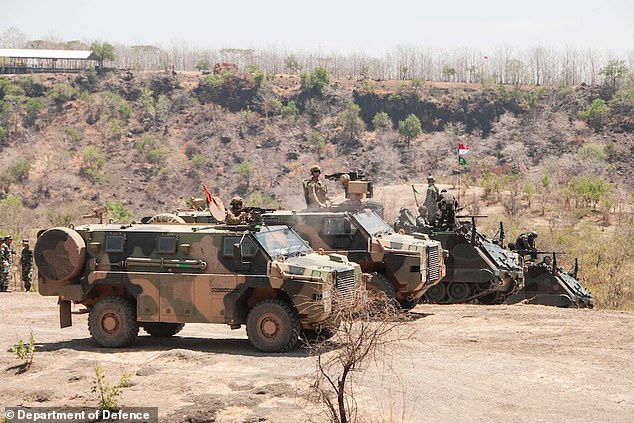 The Greens – who call their defence spokesman the peace and disarmament spokesman – want to slash defence spending to 1.5 per cent of GDP

The Greens also want laws to stop Governments going to war without Parliamentary approval, a move that critics say would damage the nation’s ability to act swiftly in face of threats.

The Greens also want to ‘renegotiate’ the nation’s alliance with the US and ban killer drones.

They want to end the offshore detention of illegal immigrants and increase refugee intake to 50,000 a year.

The Greens say ‘racism is widespread in Australia’ and ‘racial trauma is an everyday reality for so many people’.

They would mandate anti-racism training for all federal MPs and Commonwealth employees and spend $5million on an anti-racism campaign.

The Greens also say ‘we live in a rape culture: one that normalises sexual assault as ”boys will be boys”.’

They would mandate that all MPs undertake regular, comprehensive anti-bullying and harassment training and fund a national respectful relationships program in public schools.

The Greens have proposed a billionaires’ tax which takes six per cent of wealth from anyone with a net worth of more than $1billion.

They say this tax on 122 Australian citizens would raise approximately $40billion over 10 years.

They also want a Corporate Super-Profits Tax, which applies a 40 per cent tax to companies with revenue over $100million a year. 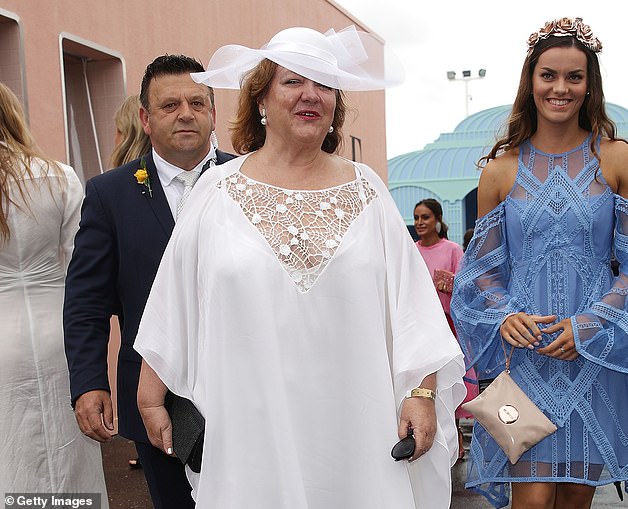