Fed up New York City subway rider rips up VERY suggestive OkCupid dating ads: ‘All of this is gross. Is it okay for a kid to see this?’

By Alyssa Guzman For Dailymail.Com

A fed up New York City subway rider ripped down suggestive OKCupid dating adverts in a display of fury where she questioned whether it was appropriate for children to view them.

‘This is propaganda, it’s affecting the next generation. I don’t know why no one sees this, this is disgusting.’

The ads are a part of the OkCupid’s inclusive ‘real dating’ campaign, promoting single New Yorkers to get back out there as the city reopens. Paired with suggestive photos and an array of sexual identifies, fetishes, and characteristics, the company stated: ‘We celebrate you: every single one of you.’ A ‘gross’ celebration of love: She ripped the ads off the train walls before changing course and lecturing masked riders about ‘government is against us’ 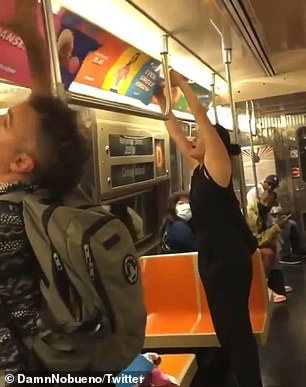 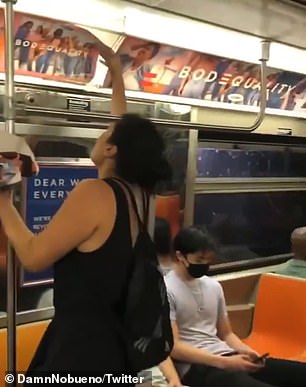 Divide and conquer: She and one of her companions ripped the ads off the wall

As the unmasked woman moved down the D train car while one of her companions filmed and another helped her rip the posters off, she switched her narrative and told her masked subway riders how the government wants to ‘divide and conquer’ citizens.

‘Divide and conquer, that’s what the Chinese want. The government is against us and you don’t see it,’ she said. ‘You guys think you take a vaccine and this is going to go away? It’s never going to go away,’ the mask-less rider ranted before moving on to Old Navy’s size inclusivity ads.

Like the OkCupid ads – which promotes all types of love from introverts to fetishes to the non-monogamists – Old Navy’s is starting a ‘fashion revolution’ by celebrating all shapes and sizes of women.

‘This isn’t about equality, guys, this is about communism,’ she claimed.

She also expressed dismay for New York City’s ‘vaccine pass,’ which allows residents and visitors of the city to show their vaccination cards physically or digitally to gain access to indoor activities, like dining.

‘It’s going to make more sense to have a ‘fat pass’ than a ‘vaccine pass,’ because guess what, most people in the ICU are overweight,’ she claimed in a Part 2 video.

A representative for the MTA told the New York Post that the organisation is subject to the First Amendment.

‘There is a review process for subway advertisements, the OK Cupid ads went through that process and were determined not to violate MTA guidelines,’ he said.

However, he added that although customers have the right to complain about adverts, they cannot destroy them.

‘Riders who violate that basic principle are subject to prosecution.’

It’s not clear whether the woman has been identified and spoken to by the MTA. 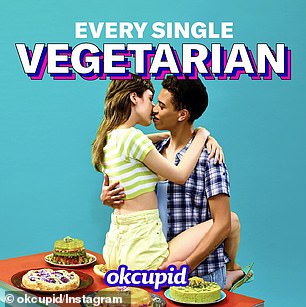 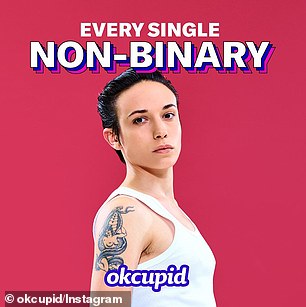 OkCupid has been promoting their suggestive ads on their social medias, as well as the subway cars around the city

She also claimed being fat keeps you ‘single.’

NYC has reported almost 1700 cases as of Friday with a seven-day average of almost 1800. 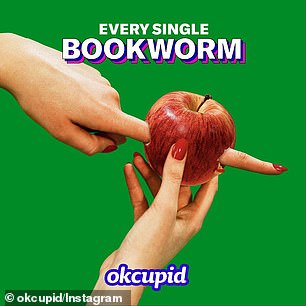 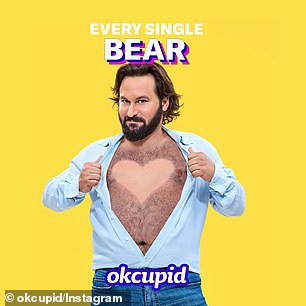