Voters across the United States on Tuesday braved worries about getting sick, threats of polling place intimidation and expectations of long lines caused by changes to voting procedures to cast their ballot.

The U.S. was on pace to exceed the 2016 presidential vote, driven largely by the nearly 102 million ballots cast ahead of Election Day, part of an early-voting push prompted by the pandemic.

Minor problems occur every election, and Tuesday was no different. Machines jammed in Iowa due to sanitizer on voters’ hands; a voting tent collapsed in New Hampshire and in Ohio a woman crashed into a polling station.

But there were no signs of large-scale voter intimidation or clashes at the polls as some had feared given the level of political rancor this year.

‘I would say it is blissfully uneventful,’ Michigan Attorney General Dana Nessel told reporters. ‘We’ve had virtually no disturbances of any kind.’

She said: ‘Fortunately this hasn’t been a systematic or widespread issue. We certainly were prepared for this being a bigger problem than it proved to be today.’

Houston, Texas: Biden supporters face off a Trump supporter outside of a polling site Tuesday 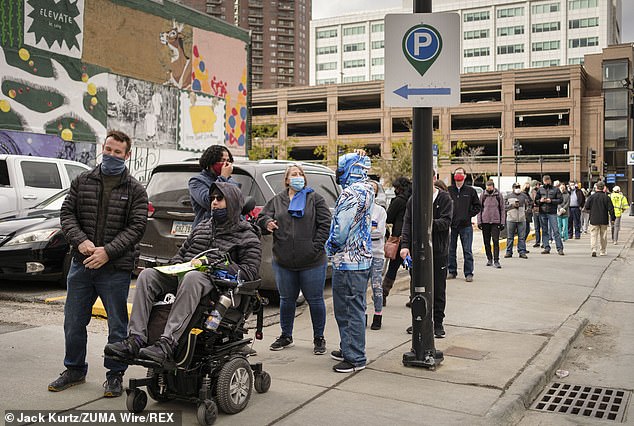 Iowa: People in line for early voting at the Polk County Auditor’s Office in Des Moines

There were long lines and sporadic reports of polling places opening late, along with equipment issues in counties in Pennsylvania, Ohio, Texas and Georgia. There were also reports of efforts to discourage people from voting that surfaced in robocalls across a number of states. The FBI was investigating.

An armed man was arrested at a polling station in North Carolina after he was reported to have been intimidating voters.

And in New York City police were forced to break up an ugly clash between voters outside a Brooklyn polling station.

In Ohio, where the woman crashed into a polling station in the Tipp City area, voting was temporarily interrupted. The driver was medically evaluated before casting her vote.

Images from Houston, Texas, show rival voters facing off outside a polling station there.

In Philadelphia footage appeared to show a man claiming to be a Trump ‘poll watcher’ attempting to enter a ballot station. 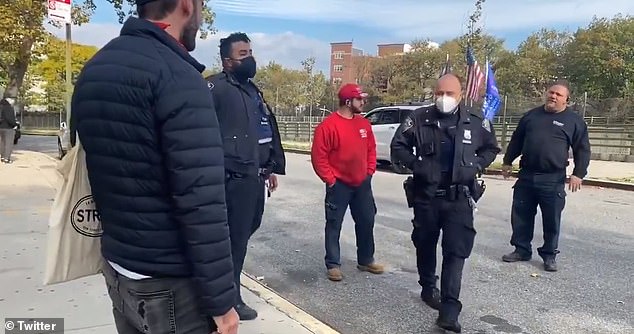 New York City: A Trump-loving father and son clashed with Democrats at a Brooklyn polling station on Tuesday in a foul-mouthed exchange that was caught on camera and shared online 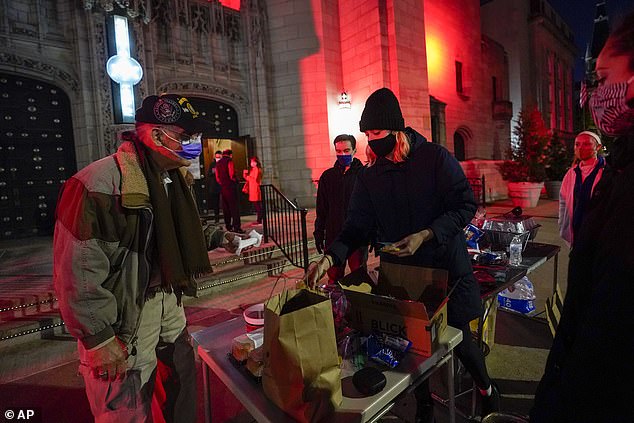 Scranton, Pennsylvania; A single voting machine jammed for just minutes Tuesday morning at a precinct in Scranton, Joe Biden’s hometown, but misleading posts on Facebook and Twitter claimed multiple machines there were down for hours

Election officials had hoped that if enough people voted early, it would ease some of the problems that states experienced during the primaries, when voters waited hours in line to cast ballots.

That appeared to be what transpired Tuesday, although some problems seemed inevitable.

Hand sanitizer spread on voters´ hands caused a ballot scanner to jam at a polling place in Des Moines, Iowa. The machine was fixed in about an hour, and poll workers moved the sanitizing station farther back in the line so voters´ hands would be dry when they first touched the ballots. 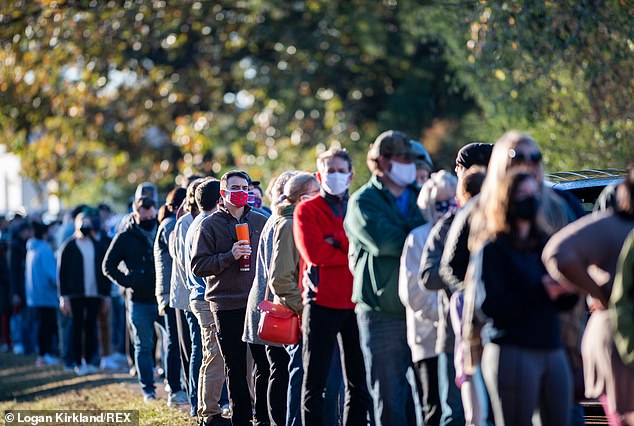 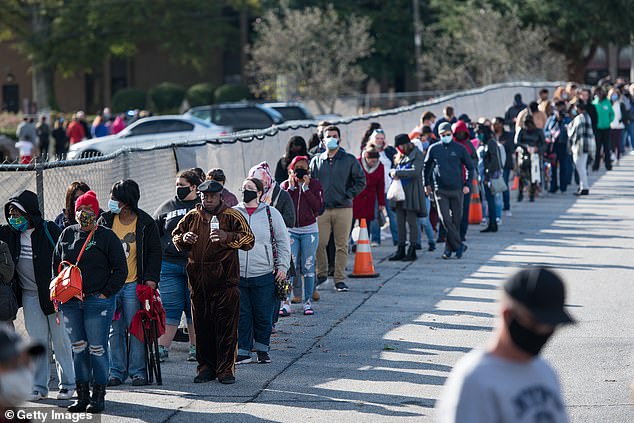 In Pennsylvania, a judge in Democrat Joe Biden´s hometown of Scranton extended voting at two precincts inside an elementary school for 45 minutes past the normal 8 p.m. close of voting, because machines had been down earlier in the day, said Lackawanna County spokesman Joe D´Arienzo.

The FBI was also investigating reports of efforts to discourage people from voting using automated calls in multiple states including North Carolina, Nebraska and Michigan. Such reports are common in every election.

Around 10 million automated, spam calls have been made to voters nationwide in recent days telling them to ‘stay safe and stay home,’ telecoms experts told The Washington Post.

There were also a few other issues with voting technology. Electronic pollbooks from voting equipment vendor KnowInk failed in Ohio´s second-largest county and in a small Texas county, forcing voting delays as officials replaced them with paper pollbooks.

Even though problems were expected, voters were still frustrated.

‘We´ve had four years to prepare for this,’ said Jenny Harris, who encountered problems with touchscreen voting machines at her polling place in Atlanta. ‘And the fact that we´re still having issues on the day that we go to the polls, it blows my mind.’ 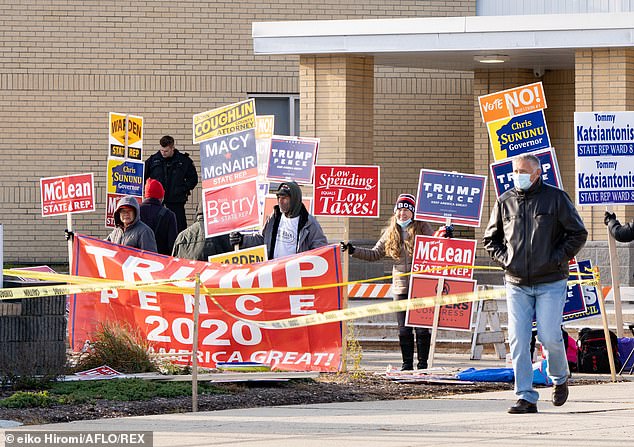 Manchester, New Hampshire: Trump supporters hold signs outside of a polling location as a voter walk out at Memorial High School election day 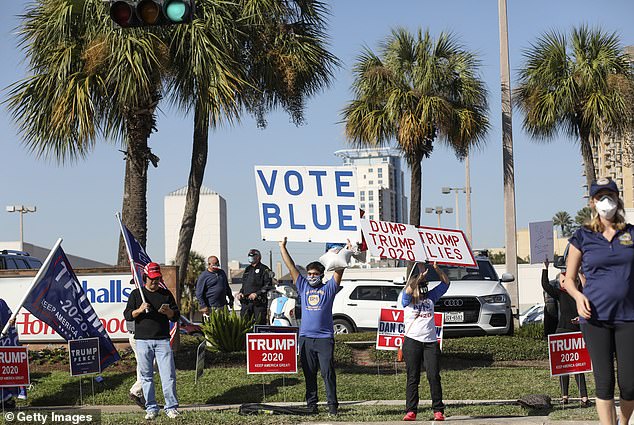 Those who did vote on Election Day included some who wanted to vote by mail but waited too long to request a ballot or didn´t receive their ballots in time.

Kaal Ferguson, 26, planned to vote by mail but was concerned he hadn´t left enough time to send his ballot back. So he voted in person in Atlanta, despite worries he could be exposed to COVID-19 by fellow voters.

‘Obviously everybody has their right to vote,’ he said. ‘But it´s kind of scary knowing that there´s not a place just for them to vote if they´d had it, so you could easily be exposed.’

Others were likely persuaded by the president´s rhetoric attacking mail voting or simply preferred to vote in person after reports surfaced over the summer of mail delivery delays following a series of policy changes implemented by the U.S. Postal Service´s new leader, Postmaster General Louis DeJoy, a major GOP donor.

‘I don´t want to see no mailman. I like to stand here, see my own people, wait in the line and do my civil duty,’ said James ‘Sekou’ Jenkins, a 68 year-old retired carpenter and mechanic who waited about 15 minutes before polls opened in West Philadelphia and voted for Biden about an hour later. 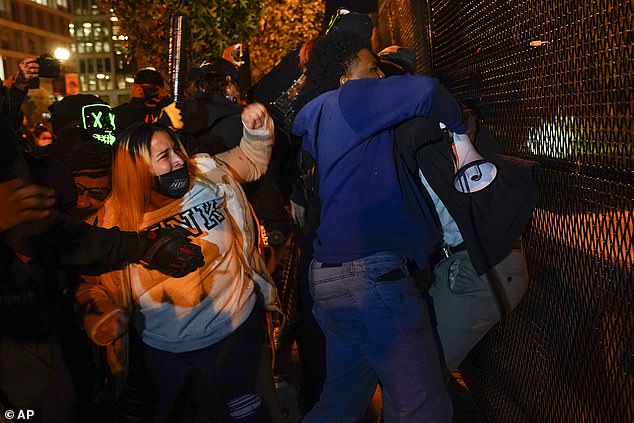 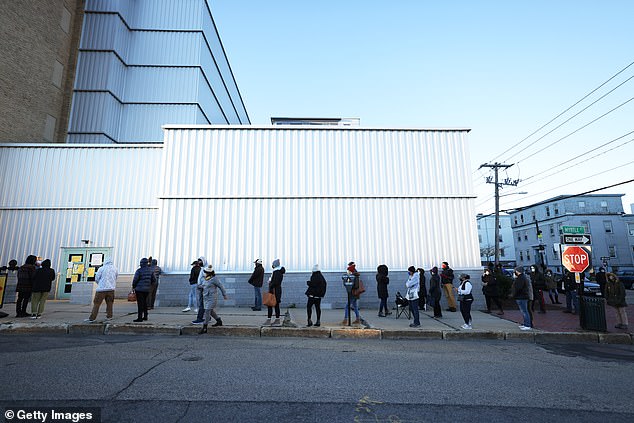 Portland, Maine: People wait in line to vote on November 03. After a record-breaking early voting turnout, Americans head to the polls on the last day to cast their vote for incumbent U.S. President Donald Trump or Democratic nominee Joe Biden in the 2020 presidential election 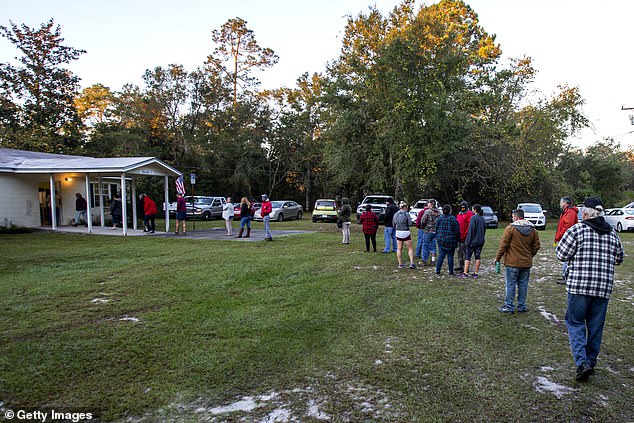 Crawfordville, Florida: Voters stand in line at dawn as the polls open on November 3 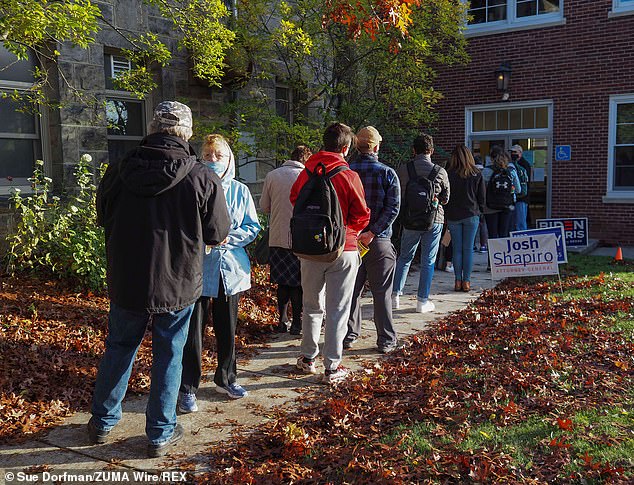 The order, which includes centers in central Pennsylvania, Philadelphia, Detroit, Atlanta, south Florida and parts of Wisconsin, followed concerns the agency wouldn´t be able to deliver ballots on time. Postal data has shown service in some battleground areas severely lagging.

‘The slowdown and compromising of the U.S. Postal Service was a concern,’ said Rebecca Kraft, a 41-year-old Milwaukee resident who voted in person. ‘So I said `All right, if I´m feeling healthy, I am going to go do it at the polls just to make sure.´’

In the months leading up to Election Day, election officials had to deal with a pandemic that has infected more than 9 million Americans and killed more than 230,000, forcing them to make systemic changes largely on the fly and with limited federal money. 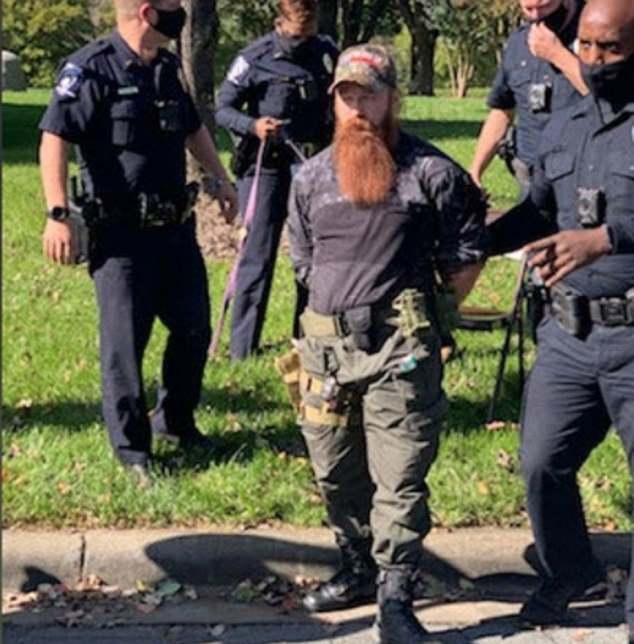 The armed man, pictured, was arrested by police for trespassing after he was banned when people at a polling station reported him for intimidating voters

‘A lot of people were fearful to come out and vote today and for me I didn´t want fear to stop me from voting on Election Day,’ said Sadiyyah Porter-Lowdry, 39, who cast her ballot at a church in Charlotte, North Carolina.

President Donald Trump has repeatedly encouraged his supporters to go to polling stations to observe voting in the run up to Tuesday’s election, raising concerns violence might break out in some locations.

In Spalding County, Georgia, machine problems led to a two-hour extension for voting. Wait times stretched beyond an hour at four voting centers in Baltimore.

But there were no signs Tuesday of large-scale voter intimidation efforts or clashes at the polls, as some had feared, given the intensity on either side of the hotly contested race between Republican President Donald Trump and Democrat Joe Biden.

The Homeland Security Department’s cybersecurity agency said earlier in the day that it had seen no apparent signs of any malicious cyberactivity, but also noted that it was too soon to declare victory. 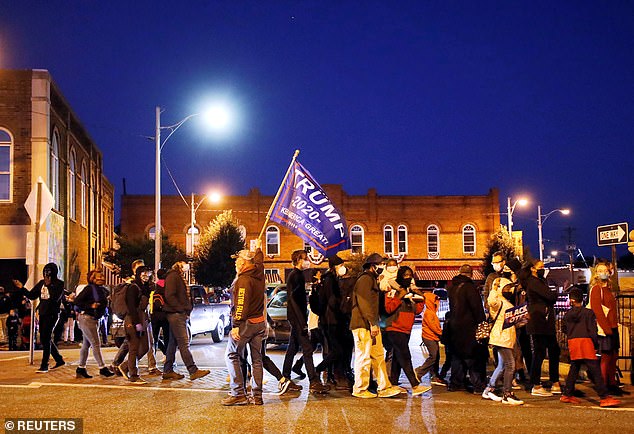 Officials have already warned that counting ballots could take days due to the avalanche of mail votes, which take more time to process and could result in another round of court battles.

Misinformation about election procedures and threats of foreign interference also clouded the run-up to Election Day. States hammered out plans for protecting against cyberattacks, countering misinformation and strengthening an election infrastructure tested by massive early voting and pandemic precautions.

The cybersecurity agency at the Department of Homeland Security said Tuesday that it had seen no apparent signs of any malicious cyber activity, at least not yet. But officials with the U.S. Cybersecurity and Infrastructure Security Agency also said it was too early to declare victory.

‘It has been quiet and we take some confidence in that but we are not out of the woods yet,’ said a senior CISA official, speaking on condition of anonymity to brief reporters about ongoing nationwide election monitoring efforts ahead of an official evaluation.

As the novel coronavirus took root in the U.S., officials repeatedly urged voters to cast their ballots early or by mail, in hopes the advance voting would ease some of the problems that materialized during the primaries, such as long lines and hours-long waits.

More than 102 million voters heeded that advice, a record number that represented 73 per cent of the total vote in the presidential election four years ago.