The US Food and Drug Administration (FDA) has warned against using the anti-malaria drug hydroxychloroquine on coronavirus patients outside of hospital settings or clinical trials.

President Donald Trump has hailed the drug, which also is used to treat arthritis and lupus, as a ‘game-changer’ for treating COVID-19, the disease caused by the virus.

The federal health agency said it was issuing the warning after several reports of abnormal heart rhythms and rapid heart rates in patients who took the medication.

‘The FDA is aware of reports of serious heart rhythm problems in patients with COVID-19 treated with hydroxychloroquine or chloroquine, often in combination with azithromycin,’ the FDA wrote in a statement issued on Friday.

‘We are also aware of increased use of these medicines through outpatient prescriptions. Therefore, we would like to remind health care professionals and patients of the known risks associated with both hydroxychloroquine and chloroquine.’

The warning comes as it’s revealed that President Trump’s aides launched a huge behind-the-scenes effort to hydroxychloroquine as a treatment for the new virus. 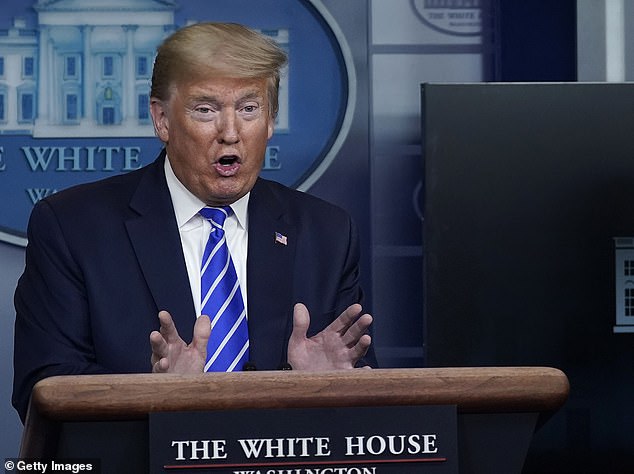 President Donald Trump has touted the drug in as a potential ‘game-changer’ for treating coronavirus. Pictured: Trump during the White House coronavirus daily briefing, April 23

The agency said hydroxychloroquine can still be used in clinical trials or in some hospitalized patients.

It’s not immediately clear if any trials are in progress or planned trials will be halted based on the new guidance.

President Trump was among the first to wax lyrical about the possible benefits of hydroxychloroquine for coronavirus patients last month.

‘HYDROXYCHLOROQUINE & AZITHROMYCIN, taken together, have a real chance to be one of the biggest game changers in the history of medicine. The FDA has moved mountains – Thank You! Hopefully they will BOTH (H works better with A, International Journal of Antimicrobial Agents),’ he wrote in March.

The study Trump refers to comes from Marseille, France, in which 30 patients were treated with hydroxychloroquine for 10 days combined with azithromycin, an antibiotic. 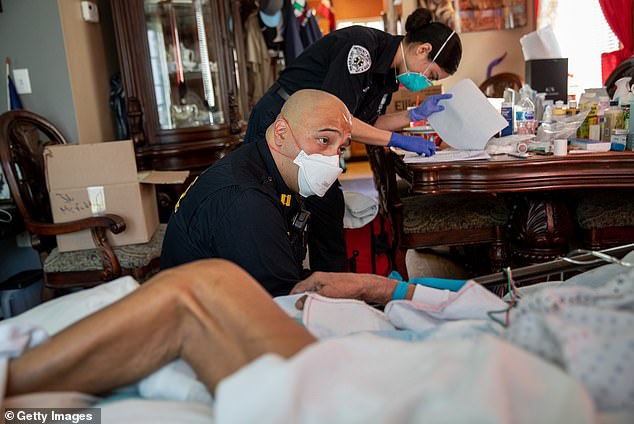 The FDA made its warning after several reports of abnormal heart rhythms and rapid heart rates in patients who took the medication. Pictured: Medics prepared to intubate a patient with COVID-19 symptoms at home

Although very small, the study ‘showed a significant reduction of the viral carriage’ after the six days and ‘much lower average carrying duration’ compared to patients who received other treatments.

One week later, the FDA issued an emergency use authorization for the drug, saying it could be used in hospitalized coronavirus patients with severe disease.

Several weeks later, the French study’s publisher said the paper ‘did not meet its standards’ because it excluded data on patients who did not respond well to the treatment.

Since then, much of the initial excitement surround hydroxychloroquine has died down.

In one study from the National Institutes of Health, 28 percent of US veterans with coronavirus who were treated with hydroxychloroquine died of the infection.

About 22 percent of those getting the anti-malaria drug plus antibiotic azithromycin died as well. 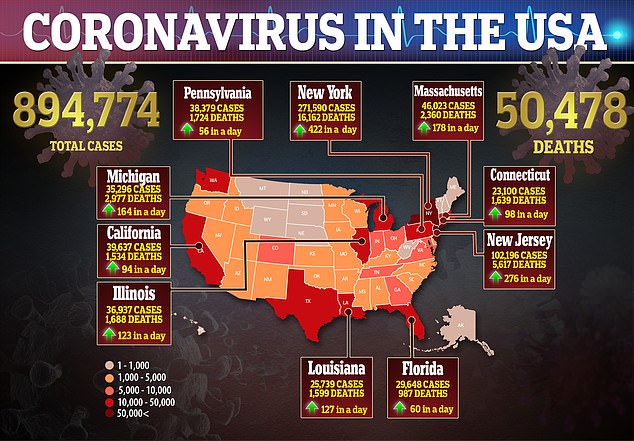 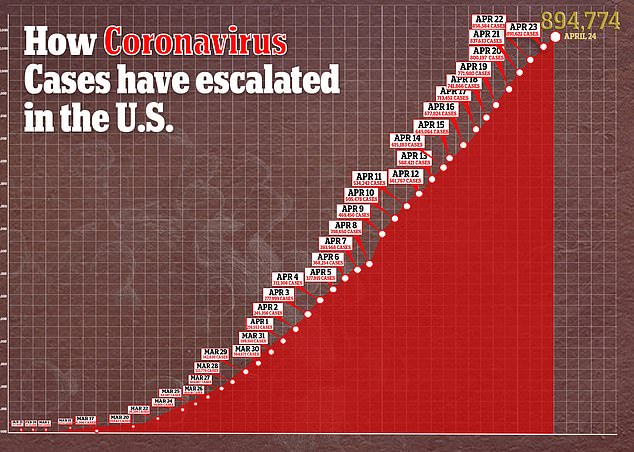 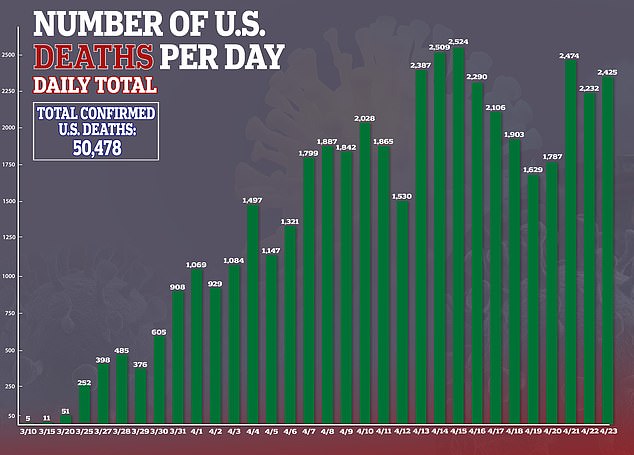 Additionally, the family of a New York woman with symptoms of COVID-19 told NBC News she died after her doctor prescribed her a combination of hydroxychloroquine and azithromycin.

The family says the physician did not confirm she had the virus nor test for heart problems  before prescribing the drug.

And, earlier this month, the Centers for Disease Control and Prevention (CDC) removed highly unusual guidance from its website informing doctors on how to prescribe hydroxychlorquine.

Initially, the CDC webpage had read: ‘Although optimal dosing and duration of hydroxychloroquine for treatment of COVID-19 are unknown, some US clinicians have reported anecdotally.’

Now the website no longer includes that information. Instead, its first sentence says: ‘There are no drugs or other therapeutics approved by the US Food and Drug Administration to prevent or treat COVID-19.’

By Katelyn Caralle, US Political Reporter for DailyMail.com

Donald Trump’s aides on the front lines of the White House coronavirus response launched a huge behind-the-scenes effort to push antimalarial drug hydroxychloroquine as a treatment for the new virus.

Brett Giroir, the assistant secretary for health at the Department of Health and Human Services, sent a group email in early April outlining the White House’s effort to push the drug, according to a Friday report from Vanity Fair.

New York and New Jersey remain the two state most hard-hit by COVID-19, with nearly 21,000 combined deaths and are approaching a combined 360,000 confirmed cases.

‘Hospitals have it,’ Grior said of hydroxychloroquine in the April 4 email. ‘Sick out patients don’t. And can’t get.’

‘So go through distribution channels as we discussed. If we have 29 million perhaps send a few million ASAP? WH wants follow up in AM,’ he continued. ‘We can get a lot more of this. Right Bob? Millions per week?’ 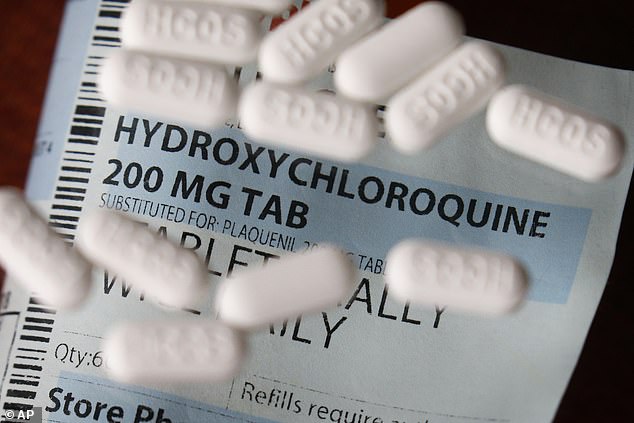 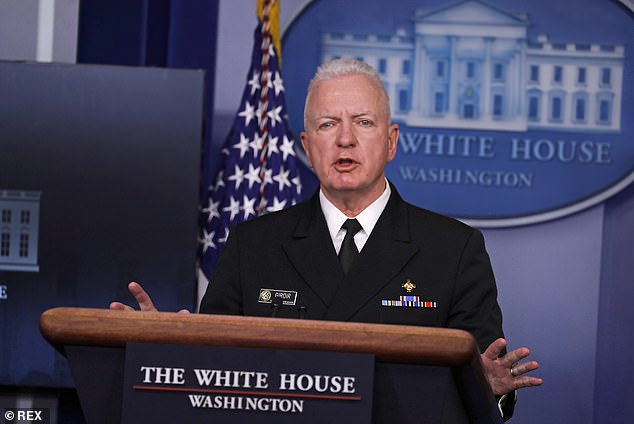 The emails between White House officials and members of the coronavirus response team show that the administration’s top officials were closely involved in the effort to push Americans to use the drug and make it widely available.

The Food and Drug Administration rolled out an emergency rule limiting distribution of hydroxychloroquine to patients hospitalized with coronavirus.

Just one hour after the initial email, however, Gaynor replied to Kadlec, Giroir, and Polowczyk and suggested that FDA Commissioner Stephen Hagn was on board with expanding patient access to the drug.

‘Hahn asked to distribute to hospitals and the drug stores,’ the FEMA administrator said.

Gaynor then said in a second email sent that night that he was working closely with Rear Admiral Polowczyk on the initiative.

‘Me and Adm P are on it. More to follow in the am,’ Gaynor wrote.

President Trump has been touting hydroxychloroquine for weeks at his nearly-daily press briefings as an effective treatment for coronavirus, often calling the drug a ‘game changer’ in the midst of the coronavirus pandemic.

The email from Grior followed the April 4 press briefing where Trump claimed the U.S. has millions of doses, as governors across the country pleaded for the federal government to help them acquire more tests, ventilators and personal protective equipment (PPE) for health care workers. 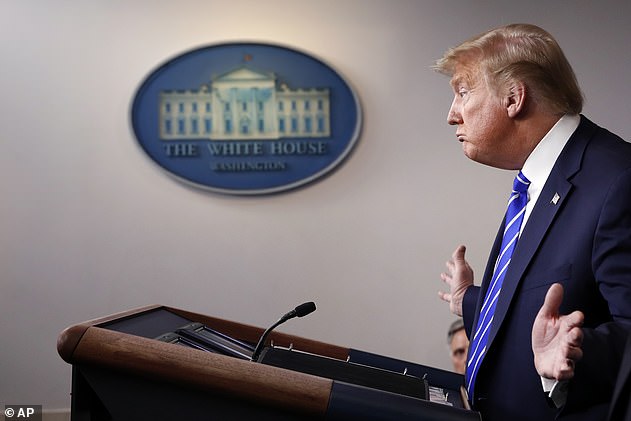 Donald Trump often touts the use of hydroxychloroquine to treat coronavirus, despite experts pushing back that the effectiveness in COVID-19 patients is still unproven and could pose more risk than benefit 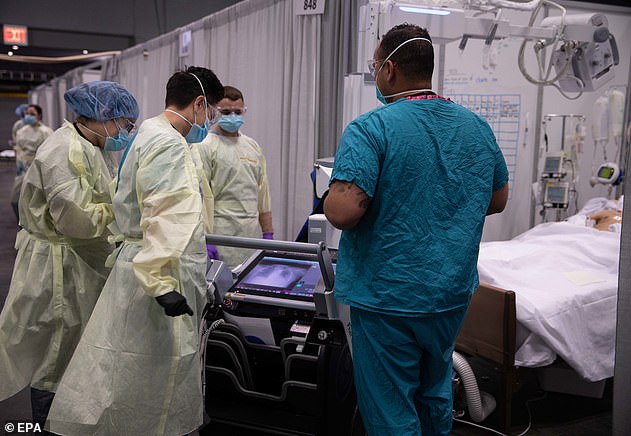 These officials were not satisfied with only allowing hospitals to obtain and give out hydroxychloroquine, and pushed for it to also be available at drug stores

‘We have millions and millions of doses of it—29 million to be exact,’ the president said of the Malaria drug. ‘We’re just hearing really positive stories, and we’re continuing to collect the data.’

A federal official with knowledge of the deliberations surrounding the drug told Vanity Fair that the federal government’s top interagency working group of clinicians and scientists tried to stop White House conversations about its use to treat coronavirus on March 24.

The White House push for using the drug that attacks blood parasites for COVID-19, which is thought to be a respiratory disease, has sparked worldwide shortage of the drug. It also prompted the start of U.S. negotiations with Indian Prime Minister Narendra Modi to lift export restrictions on its active ingredient.

A medical countermeasures group within HHS recommended the proposed treatment only be studied in controlled trials, Vanity Fair revealed in document reviews.

The safety and efficacy, the HHS group claimed, was ‘not supported by data from reliable clinical trials or from non-human primates’ and carried ‘potential risks.’

A FEMA spokesperson asserted to Vanity Fair that the administration ‘does not maintain stocks of medicine,’ despite Gaynor’s apparent involvement in the White House effort to get more stock of the drug.

‘Given increased demand, Dr. Hahn considered whether the donated drugs could be distributed in the commercial market to ensure a stable supply for malaria, lupus, and rheumatoid arthritis patients,’ the spokesperson said.

While there has been a push for hydroxychloroquine use by some in the White House, there are others who are starkly against urging coronavirus patients to use the drug.

An HHS official who was the administration’s top coronavirus vaccine developer, Rick Bright, was pushed out of his position April 21 – and he claims he was ousted because he resisted efforts ‘to fund potentially dangerous drugs promoted by those with political connections.’

HYDROXYCHLOROQUINE DID NOT IMPROVE SURVIVAL ODDS FOR 600 CORONAVIRUS PATIENTS

Patients treated with hydroxychloroquine are no better of than those who don’t receive the drug hailed by Trump as a ‘game-changer’ results of a New York state Health Department trial suggest.

‘I think from the review that I heard basically it was not seen as a positive, not seen as a negative,’ said Governor Andrew Cuomo during CNN’s coronavirus town hall.

Ultimately, the study, conducted by SUNY at Albany, is intended to involved some 4,000 coronavirus patients, but the preliminary results are from a sample of 600 patients.

Disappointingly, survival rates were no better among the group treated with the experimental drug than among those who got the standard supportive care, including oxygen, IV fluids and, if necessary, mechanical ventilation.

Of the 600-some coronavirus patients treated at 22 New York City area hospitals, some were treated with hydroxychloroquine alone, others were treated with the malaria drug plus the antibiotic azithromycin, and a third group got only the typical supportive care.

‘We don’t see a statistically significant difference between patients who took the drugs and those who did not,’ Dr David Holtgrave, who led the SUNY Albany study told CNN.

Notably, there were not higher rates of heart problems among the patients given hydroxychloroquine, despite the potential for dangerous arrhythmias as a side effect.

It comes after a Veteran Affairs study found that more COVID-19 patients treated with hydroxychloroquine died than did those who didn’t receive the drug.

Dr Holtgrave stressed, however, that the results of his stud are preliminary findings of an ongoing study that have not been peer-reviewed or published.

He and his team expect the full research, inclusive of 1,200 patients, will be ready for release as early as next week.

‘Hopefully what we’ve done here is to start collecting data and evidence and learning lessons as we go forward about effects and side effects,’ he told CNN.

Echoing Dr Holtgrave’s sentiments during CNN’s round table, Food and Drug Administration (FDA) Commissioner Dr Stephen Hahn said: ‘Obviously you need to wait for the entire cohort of individuals to have been treated with the complete course of treatment to get a full read on that.’

So far, the researchers have only revealed a hint at comparative survival rates, but the full study will also detail differing hospital stay lengths and whether patients treated or not treated with hydroxychloroquine had to be put in ICUs on ventilators, according to CNN.