The U.S. Food and Drug Administration (FDA) is poised to approve a new drug to treat Alzheimer’s for the first time in nearly 20 years, regulators said Wednesday.

The drug, called aducanumab appears to reduce the presence of a harmful protein called tau that builds up in tangles seen in the brains of Alzheimer’s patients.

An FDA approval could come by March, which would make aducanumab the first new treatment for the disease in decades and the first that appears to be able to slow the progression of the fatal, mind-wasting condition that affects millions of people.

Shares of Biogen and its partner Eisai both jumped 40 percent. The FDA staff comments also buoyed shares of other Alzheimer’s drug developers, including a 15 percent rise in shares of Eli Lily and Co.

Biogen’s drug, aducanumab, is set to get FDA approval after it reduced the ‘tangles’ of harmful tau proteins (red) in the brains of Alzheimer’s patients

The agency’s documents were released ahead of a meeting on Friday of outside experts who will review, and decide whether to recommend approval of, aducanumab, an antibody designed to remove amyloid plaques from the brain.

FDA drug reviewers said results from one pivotal trial of aducanumab were persuasive and strongly positive. They acknowledged that a second large trial did not succeed, but maintained it did not detract from the findings of the positive study. The FDA is not obligated to abide by its expert panel recommendations, but typically does.

One statistical reviewer at the FDA said another study is needed to confirm whether aducanumab is effective. ‘There is no compelling substantial evidence of treatment effect or disease slowing,’ FDA staffer Tristan Massie wrote in the review.

Alzheimer’s disease afflicts nearly six million Americans and millions more worldwide. Biogen estimates about 1.5 million people with early Alzheimer’s in the United States could be candidates for its drug. 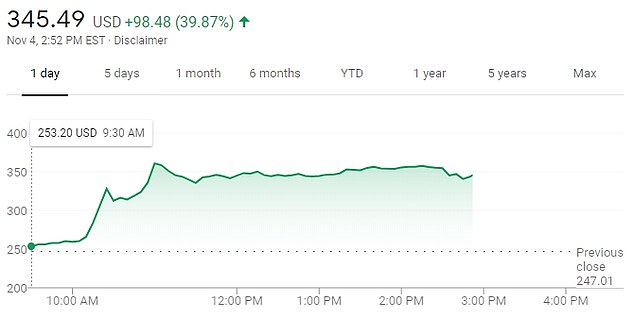 Patient advocacy groups have argued that aducanumab needs to be approved due to that large unmet medical need.

Biogen and its investors also need an aducanumab approval after the company recently lost a patent fight over its big-selling multiple sclerosis drug Tecfidera.

If approved, annual sales are forecast to reach $5.3 billion by 2025, according to Refinitiv.

Cambridge, Massachusetts-based Biogen in October last year revived its plans to seek approval for aducanumab, months after it had said that an independent futility analysis of its two pivotal studies showed they were unlikely to succeed.

Biogen said it changed course after a new analysis showed a high dose of the drug could slow disease progression.

The FDA staff said data from one of the trials ‘provides the primary evidence of effectiveness as a robust and exceptionally persuasive study demonstrating’ a clinically meaningful treatment effect.