Americans are being urged to check their freezers for Aldi-sold falafel amid fears it could be contaminated with E.coli.

The Food and Drug Administration (FDA) said today 20 people across six states had fallen sick with the bacteria after eating the food. Five are in hospital.

It is being linked to either the Traditional or Garlic and Herb falafel from the brand ‘Earth Grown’, sold exclusively by Aldi.

Officials are urging anyone with the products to throw them out or return them for a full refund, while Aldi says they have stripped the products from their shelves.

People can catch E.coli after eating contamined food or touching feces from humans or animals, leading to severe stomach cramps, vomiting and diarrhoea.

Most patients recover within five to seven days, but some are hospitalized after developing serious kidney problems.

Pictured above is the packaging for frozen garlic and herb falafel sold by Aldi. Officials are urging anyone with these products to throw them out or return to store for a full refund 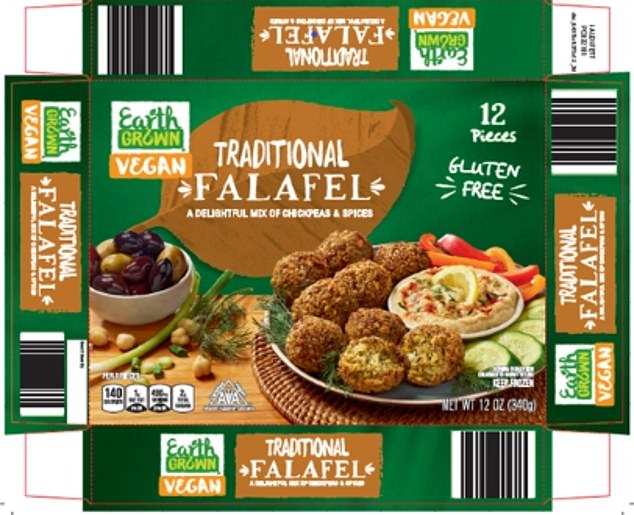 Pictured above is the packaging for the frozen traditional falafel sold by Aldi. This is also being recalled 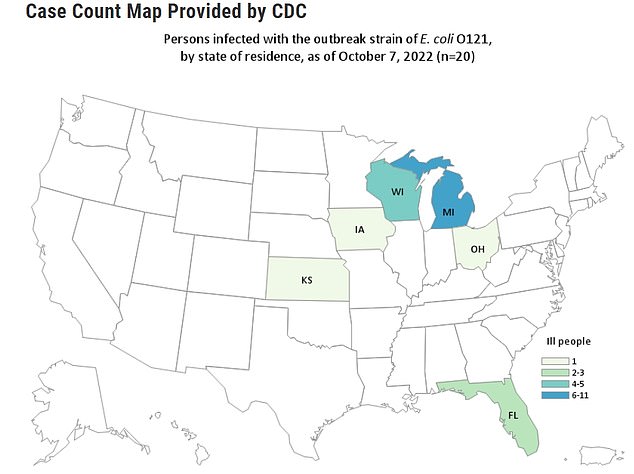 Pictured above are states where E.coli has been detected linked to the falafel. More than half the cases (11 infections) have been reported from Michigan

WHAT IS E. COLI AND WHY IS IT DANGEROUS?

E. coli (Escherichia coli) are bacteria that generally live in the intestines of healthy people and animals.

Symptoms of an E.coli infection include bloody diarrhea, stomach cramps, nausea and vomiting.

This is a condition in which there is an abnormal destruction of blood platelets and red blood cells.

According to the Mayo Clinic, the damaged blood cells can clog the kidney’s filtering system, resulting in life-threatening kidney failure.

No treatment currently exists to treat these infections. They usually disappear within one week, but medical professionals recommend resting and drinking fluids to help prevent dehydration and fatigue.

It was not clear how the products became contaminated with E.coli, but experts say the bacteria is typically spread when feces comes into contact with food or water.

The FDA fears contaminated products may still be lurking in freezers due to a shelf-life of about 18 months.

It says the frozen falafel was distributed to stores after June 24, 2021.

A total of 18 people who fell sick with the E.coli have been interviewed by the FDA so far.

And six said they ate the frozen falafel in the days before falling ill.

The last case was detected on September 19, data shows.

Most are in Michigan, 11 cases. But four have been detected in Wisconsin, two in Florida and one each in Iowa, Kansas and Ohio.

Cuisine Innovations — which made the frozen falafel — began recalling all affected products on October 6.

The food business says online it is a ‘leading manufacturer’ of instant meals, with the ‘Earth Grown’ label on several vegan and vegetarian products in Aldi stores.

Companies are always urged to screen their products for contamination before they are dispatched for sale on shelves.

This includes regular inspection of manufacturing lines, and checks for contaminants.

The Centers for Disease Control and Prevention (CDC) says that in serious cases of infection patients vomit so much they can’t keep liquids down.

Most patients recover within five to seven days, but a number will go on to develop a more serious illness including kidney problems leading to hospitalization.

It comes after an E.coli outbreak that sickened at least 37 people in four states was linked to lettuce used at Wendy’s.

The cases were detected over two weeks in Indiana, Michigan, Ohio and Pennsylvania.

Many felt ill after eating burgers or sandwiches sold by the fast food company. Wendy’s removed romaine lettuce from stores in regions affected in response.