The Food and Drug Administration (FDA) is investigating after another child died after allegedly consuming infant formula produced by Abbott Laboratories.

An Abbott spokesperson told DailyMail.com the company received ‘limited product and clinical information’ to evaluate the case and, at this time, there are ‘no conclusions’ and ‘no evidence to suggest a causal relationship’ between Abbott products and the reported infant death.

The probe comes less than a month after the FDA gave Abbott the green-light to reopen its factory in Sturgis, Michigan. The plant is the largest baby formula factory in the U.S.

The facility was shuttered in February following a bacteria contamination in four infants, including two who died. Investigation revealed Abbott products were not likely the source of the infections in the prior cases.

The Sturgis plant shuttered again more than a week ago after severe thunderstorms and heavy rains swept caused damage to the facility. The company said it needs time to assess damage and re-sanitize the factory before reopening again.

The move is part of President Joe Biden’s Operation Fly Formula initiative aimed at easing supply shortages disruptions heightened by the closure of the Abbott plant.

The latest infant death occurred in January, according to a consumer complaint sent to the FDA on June 10.

The agency didn’t specify which Abbott product the child allegedly consumed or where the baby formula was produced, but noted its investigation is still in the preliminary stage.

However, the formula manufacturer alleges there was ‘limited product and clinical information provided to evaluate the case.’

‘At this time, there are no conclusions that can be drawn and no evidence to suggest a causal relationship between Abbott’s formulas and this reported case,’ the spokesperson said. ‘If additional information is available, we will investigate further per our complaint handling process.’ 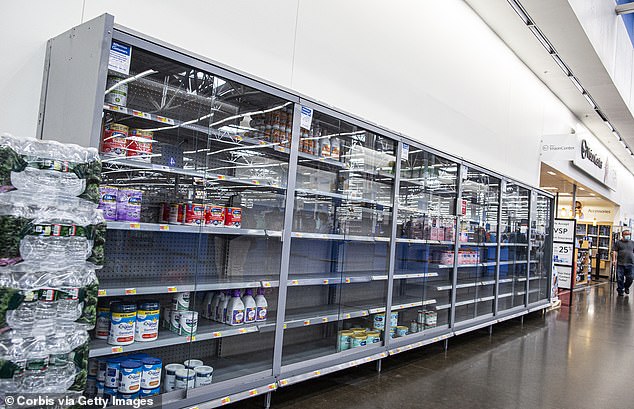 Abbott shuttered its Michigan plant in February following a bacteria contamination in four infants, including two who died. Investigation revealed Abbott products were not likely the source of the infections in the prior cases. Empty formula shelves are seen at a Walmart in New Jersey on May 26 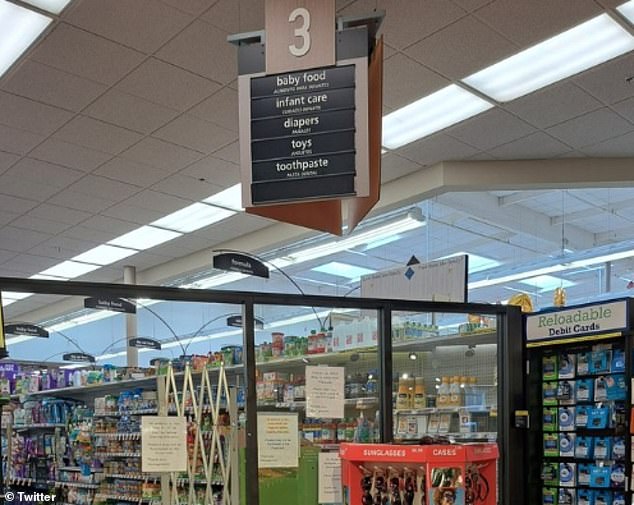 An American shopper shows how the baby formula aisle at their local grocer is partitioned off amid the national shortage. The photo was shared online on June 13

The FDA investigated nine reports of infant deaths, including seven that had not been made public prior to earlier this month, between December 2021 and March 2022 that had allegedly been linked to baby formula. The most recent case would mark the 10th alleged death.

The infant death reports were included in a list of 128 consumer complaints issued to the FDA. The complaints were made public by eFoodAlert on June 8.

Two of the deaths listed in the complaints were numbered among the four confirmed cases of Cronobacter sakazakii identified by the Centers for Disease Control and Prevention (CDC).

The FDA reportedly discovered Cronobacter bacteria at the Sturgis plant.

An Abbott spokesperson told DailyMail.com in May that ‘thorough investigation’ by the FDA and Abbott revealed ‘infant formula produced at our Sturgis facility is not the likely source of infection in the reported cases and that there was not an outbreak caused by products from the facility’.

The other seven deaths were reported to the FDA its consumer complaint system and two mentioned Salmonella in the complaint description.

The FDA has said it could not find enough evidence linking those seven circumstances directly with Abbott’s plant. 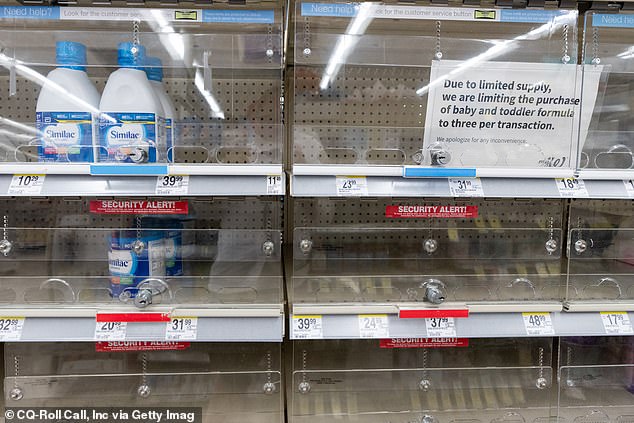 A sign notifies customers of purchase limits for baby and toddler formula at a Walgreens store in Las Vegas, Nevada on May 29

Meanwhile, national leaders are trying to ease the nationwide baby formula shortage that worsened after the Abbott factory shut down due in February.

Abbott recalled several leading brands of formula then, including Similac. That squeezed supplies that had already been strained by supply chain disruptions and stockpiling during COVID-19 shutdowns.

The ongoing formula shortage has been most dire for children with allergies, digestive problems and metabolic disorders who rely on specialty formulas.

The Biden administration announced Wednesday that will be importing formula from Mexico starting this weekend.

The Department of Health and Human Services (HHS) is expediting the travel of trucks that will drive about 1 million pounds of Gerber Good Start Gentle infant formula from a Nestlé plant to U.S. retailers, nearly doubling the amount imported to the U.S. to date.

Cargo flights from Europe and Australia already have brought baby formula into the U.S., including two new rounds of air shipments that begin this weekend.

Last month, the Food and Drug Administration moved to ease federal import regulations to allow baby formula to be shipped to the U.S.

Biden also authorized the use of the Defense Production Act to provide federal support to move formula from overseas into the U.S.