F&C INVESTMENT TRUST: Now in its 155th year, £4.7bn trust believes its emphasis on trying to avoid surprises is more appealing than ever

Investment trust F&C has been around the block a few times. Now in its 155th year, it believes its emphasis on trying to avoid surprises is more appealing than ever.

Despite the fact that the investment management company behind the stock market-listed trust has changed over the years – it’s currently global giant Columbia Threadneedle – the fund’s boss has been in situ for more than eight years.

Indeed, Paul Niven, head of asset allocation at Columbia, is only the third manager to oversee the £4.7billion trust in the past 50 years. This emphasis on continuity manifests itself in an investment conservatism that currently seems more appropriate than ever.

‘Consistency is one of the trust’s hallmarks,’ says Niven. ‘We run a truly diversified portfolio which means we don’t necessarily shoot the lights out when stock markets are racing ahead, but we do stand up to market adversity rather better than most rival funds.’

The trust’s track record backs Niven’s argument. Over the past year, the average global investment trust has recorded a loss of 16.0 per cent. This compares with a 2.9 per cent gain achieved by F&C.

Over the past three and five years, the trust has generated total returns of 36.4 and 59.6 per cent respectively. This compares with the average return from global funds of 13.1 per cent and 31.0 per cent.

The trust’s diversification is on many levels. It holds just short of 400 stocks, with the biggest single stake being in US tech giant Microsoft, representing 2.2 per cent of the fund’s assets.

In contrast, global investment trust Scottish & Mortgage, two and a half times the size of F&C, has just 101 holdings with the biggest stake being in US biotech company Moderna (7.2 per cent).

Its portfolio is also truly global, with exposure to all the world’s main stock markets – as well as emerging markets. A further diversifier is the trust’s investment in private equity, standing at just below 13 per cent.

Unlike most other trust managers, Niven doesn’t pick the stocks which comprise F&C’s portfolio. He is more of a conductor, deciding the overall asset allocation and then getting investment teams at Columbia Threadneedle – and in some instances other investment houses – to run slices of the portfolio.

In the last two years, Niven’s big investment calls include a significant reduction in exposure to large US growth stocks (the likes of Alphabet, Amazon and Apple) and an exit from global smaller companies. 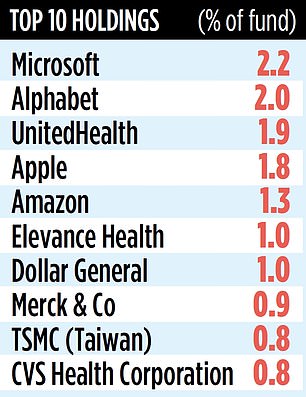 Holdings in more conservative companies – such as the US discount store Dollar General and US flavouring giant International Flavors & Fragrances – have been added to.

Niven is under no illusions about the challenges ahead for stock markets – especially the corrosive impact of inflation and recession on corporate earnings.

But he is adamant that over the long term, equities should deliver attractive returns.

For investors who like to see some of their returns delivered in the form of income, F&C does all it can to provide a growing dividend.

Last year’s dividends totalled 12.8 pence, an increase of 5.8 per cent. But when compared with the current share price of £9.08, they represent a meagre annual income of 1.4 per cent.

Reassuringly, F&C’s board is determined to build on the trust’s 51-year record of annual dividend increases.

F&C, soon to be a constituent of the FTSE100 Index, has competitive annual charges of 0.75 per cent. Its stock market ID code is 0346607 and the ticker is FCIT.