A dad who claims to have died more than 200 times from a medical condition that causes his heart to suddenly stop says he knows what ‘the other side’ feels like.

Troy Archer has an extreme case of vasovagal syncope, also known as the fainters’ condition. His daughter Minnie, 8, also suffers from the same illness.

With most cases of vasovagal syncope, the person experiences a sudden drop in their heart rate and blood pressure, causing them to faint.

Troy Archer had a pacemaker fitted for his extreme case of vasovagal syncope, which causes his heart to suddenly stop

In Mr Archer’s case, though, his heart just stops, he flatlines, and he goes, however briefly, to the ‘other side’.

‘One of the most memorable attacks was when I was in the Tweed Hospital and I heard the heart monitor making the flatline noise. I understood that I was gone,’ he told the Sunday Mail.

He said he heard his family being told to leave the room and a doctor pushing open his eyelids and telling him to stay with him.

Despite his shocking condition, he did not feel afraid, instead feeling ‘a wave of content’.

‘There was no tunnel, no bright light but it wasn’t darkness. It felt comfortable… as I was coming back that is when there was a whirling, swirling feeling and flashes of the faces of my family appeared,’ he said.

Mr Archer doesn’t need defibrillation when this happens, he makes it back to life by himself, he said. 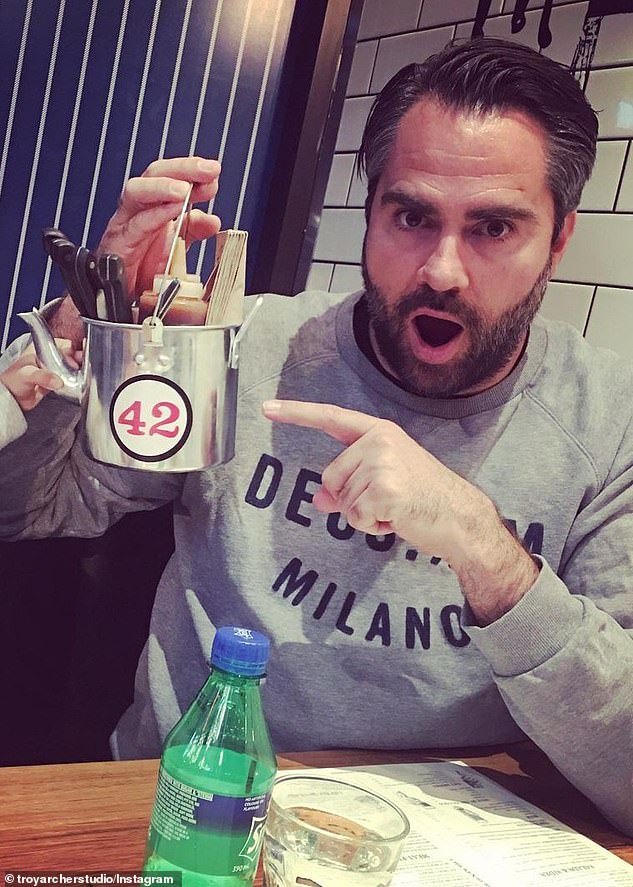 ‘There was no tunnel, no bright light but it wasn’t darkness,’ Troy Archer says of his trips to the ‘other side’ when his heart stops

Clinical cardiologist David Colquhoun said vasovagal syncope is a common problem in cardiology, but the cases experienced by 44-year-old Troy Archer and his daughter Minnie are very rare.

‘In this incidence it seems there may be a genetic, electrical fault. The body may show no vital signs but this would only last for seconds as after 30 seconds the brain would start to be impacted,’ Dr Colquhoun told the Sunday Mail.

‘It’s extreme to say that Troy has died because in reality you only die once but it must be very frightening.’

Mr Archer had a pacemaker fitted for his condition in 2011. Last year he posted about it on Instagram, saying that it had been nine years since he shaved half his chest, ‘and you can see clearly that I hadn’t yet got around to shaving my face’.

‘In all seriousness, having a pacemaker installed changed my life, and the lives of a bunch of those closest to me. Rough journey on the way there, but it feels like another lifetime ago!’ he wrote.

Dr Colquhoun said that in 35 years of working with people with serious heart conditions, he had only seen one other patient who needed a pacemaker for vasovagal syncope.

What is vasovagal syncope?

It occurs when you faint because your body overreacts to certain triggers, such as the sight of blood or extreme emotional distress.

That leads to reduced blood flow to your brain, causing you to briefly lose consciousness.

Mr Archer regularly talks to Minnie about their shared condition as he does not want her to live her life in fear of it. He and his wife Sarah tell Minnie she has a superpower.

Brave Minnie told her parents she wasn’t scared of having seizures, ‘but the look on her face when she’s regaining consciousness would say otherwise’, her dad said.

Mr Archer once had a seizure while driving to Brisbane, but managed to open the car door and fall out. He woke up surrounded by about 20 people who had stopped to help.

The Good Samaritans thought he was dead and were shocked when he suddenly came to.

This particular situation won’t happen again as he is no longer allowed to drive.

Mr Archer said being active and outdoorsy is a great help as he, Minnie Sarah and Marley continues to live their lives as normally as possible.