A father-of-six died after falling into a recycling baling machine which had many safety features disabled, an inquest heard.

Gul Daad Khan, 36, was working long hours at a sprawling back-street site in Digbeth, Birmingham where workers claimed they were earning just over £3 an hour.

He died in the horror accident on October 12, 2016, at the Liverpool Street site after falling into a baling machine he was trying to unblock.

The land is owned by Cardboard 4 Cash Ltd, which changed its name in 2018 to C4C Investments Ltd.

An inquest heard the baling machine in question was being leased by Cardboard 4 Cash to another recycling firm, Mr Recycle Ltd.

Gul Daad Khan, 36, (pictured) died after falling into a recycling baling machine which had many safety features disabled, an inquest heard

The inquest was told many safety features on the baler had been disabled, no risk assessments had been carried out and no safety equipment was provided to employees.

These findings were not linked to any specific firm.

An investigation was launched by the Health and Safety Executive following the tragedy on October 12 in 2016.

Yet almost four years on and no one has faced any action over the death in an industry which has seen at least 19 workers killed since 2017.

The chilling details of the tragedy were revealed at the inquest which stated the official cause of death as ‘crush asphyxia’. 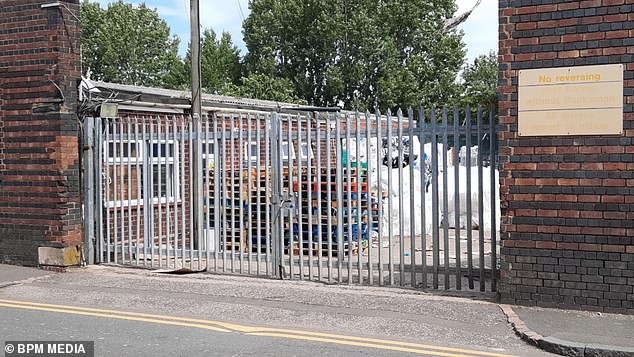 Mr Khan was working long hours at a sprawling back-street site in Digbeth, Birmingham (pictured) where workers claimed they were earning just over £3 an hour

Mr Khan had climbed onto the top of the huge baler, used to crush cardboard, after it had become blocked but fell into the machine and suffered fatal injuries.

In his written record of inquest, then-assistant coroner James Bennett said: ‘The baler had become blocked due to overloading with cardboard. In an attempt to clear the blockage, the deceased climbed onto the top of the baler. He fell into the machine, which then continued to operate.’

The coroner listed a string of ‘contributory’ issues to the death.

‘Many safety features of the baler had been disabled. The baler had not been maintained,’ he said.

‘No actions had been taken in response to safety concerns raised in prior Health & Safety audits. No risk assessments had been carried out. No safe systems of work were in place for general working, or for clearing blockages. 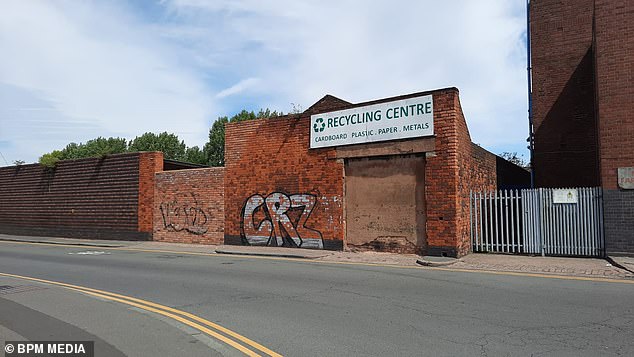 He died in the horror accident on October 12, 2016, at the Liverpool Street site (pictured) after falling into a baling machine he was trying to unblock

‘No training had been carried out. No supervision was in place. Visibility around the baler was poor. No safety equipment was provided to the employees. Wet cardboard was a tripping hazard.’

A statement by Mr Khan’s former flatmate and work colleague Gulbacha Yousafhail was read out at the inquest and he talked about the low pay and working conditions where they both worked.

He told the court he was illiterate and did not even know the address of the site, where he said he worked six days a week, 11 hours a day, for just £35 – around £3.18 per hour.

From their wages he and Mr Khan paid £100 each per month for a shared rented room in Lozells. Both had been working at the work site for around three years.

‘I was just given a jacket to wear and that’s it.

‘Mostly my job was cleaning and I considered myself safe. I believed the other workers were feeling their self safe because nobody like to get hurt.

‘Cardboard would (be) brought to this place in vans and then making bundles and export to China in big containers.’

Talking about the day of Mr Khan’s death, he said: ‘The incident didn’t happen in front of me.

‘I was cleaning and Gul Dad was working on the machine.

‘Then suddenly people started screaming that Gul Dad got hurt. When I arrived there he was already dead.’

He said he believed Mr Khan was hit by a conveyor belt which ran the machine, a belt he said his former colleague had previously repaired.

Mr Khan had climbed onto the top of the huge baler, used to crush cardboard, after it had become blocked but fell into the machine and suffered fatal injuries. Pictured is an aerial view of the recycling site

‘This conveyor belt is about two metres width,’ he said.

‘Sometime ago when it had a hole in the belt, it was about half a metre big. That hole was repaired by Gul Dad and he mended it by putting some long screws in it. But the owners never fixed it properly.’

The inquest heard the machine was being leased from Cardboard 4 Cash by Mr Recycle Ltd whose sole director is Lee Piper.

In an unconnected case Piper, 40 and from West Bromwich, was jailed for ten years in December 2018 for sex offences including rape, attempted rape, sexual assault, ABH and inciting prostitution for gain.

We separately wrote to Piper in jail and Kulvinder Singh Sidhu, the director of Cardboard 4 Cash, to comment on claims made at the inquest about the machine not being repaired properly prior to Mr Khan’s death.

At the time of publication no response had been received.

Talking about his lost colleague and friend Gulbacha had told the inquest: ‘I lived with Gul Dad for long time and he was a healthy and perfect person and as far as I know he didn’t have any medical problem.

‘He never drank alcohol because we are Muslim.’

When initially contacted, West Midlands Police said the Health and Safety Executive was leading the investigation – while the HSE said it was the force.

Cardboard 4 Cash Ltd and Mr Recycle Ltd were each served with improvement notices on November 2, 2016 and a further six prohibition notices between November 3-11 in 2016 under health and safety at work legislation, provision and use of work equipment and electricity regulations.

The orders included banning the use of the baling machine ‘until such time as it has been subject to a thorough examination and maintenance check by a competent person and any deficiencies identified rectified to ensure that it can be operated in a safe manner and safety devices are working.’

The companies were also banned from using some fork lift trucks until safety examinations took place. Once a Prohibition Notice has been served the restrictions remain in place so long as that business is operating.

The activity should not resume or continue until the matters specified in the prohibition notice have been remedied.

According to latest statistics, seven people were fatally injured in the waste and recycling industry in 2018/19 – down from 12 who died the year before.

The fatality rate for the waste industry is now said to be only second to the agriculture sector.

A spokesman for the Health and Safety Executive said: ‘The investigation into the incident is ongoing and HSE continues to support and liaise with West Midlands Police who retain primacy of the investigation, in accordance with the Work Related Death Protocol.

‘As the investigation is live, we are unable to comment further at this time.’

An inspection of the Liverpool Street site took place in May 2019, the HSE confirmed.

This week West Midlands Police confirmed primacy for the investigation has been handed to the HSE.