A father-of-one baffled Grand Designs viewers last night in the ‘craziest episode ever’ after he spent four years and £4.5 million transforming an abandoned Neo-Gothic cemetery lodge into his dream home with a swimming pool and a moat.

Justin, from London, appeared on the hit Channel 4 series, and revealed his desire to transform the £1.8million abandoned keepers lodge  and adjorning ex-council toilet block into a luxurious mansion in just 12 months for £1.6 million.

His vision involved restoring the lodge but demolishing the ugly toilet blocks and replacing them with an enormous luxury ground floor extension, with added moat and giant basement with a swimming pool – all just metres from the nearest grave.

Yet after starting the project in October 2016, he was hampered with difficulties, including obtaining planning permission to enter the graveyard from his garden, and ended up spending £4.5 million and four years making his dream come true.

Viewers were blown away by the remarkable build, with one commenting: ‘Possibly the greatest #GrandDesigns ever. That was mad, beautiful and very, very funny.’

Justin, from London, baffled Grand Designs viewers last night in the ‘craziest episode ever’ after he spent four years and £4.5 million transforming an abandoned Neo-Gothic cemetery lodge into his dream home with a swimming pool and a moat (pictured, before) 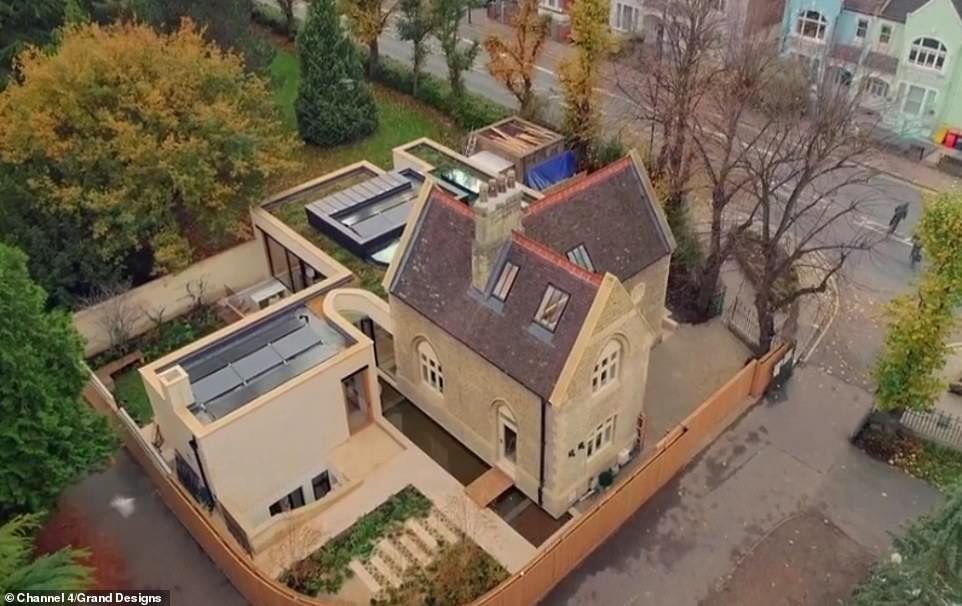 Another wrote: ‘Bloody love #GrandDesigns and what an episode to start the new series. One hell of a house but with one hell of a pricetag as well.’

Justin revealed his enthusiasm for the project came from his love of the cemetery, which he said he walked through four times a day.

A former captain in the Scots Guard, Justin was deployed on missions to Iraq and Northern Ireland before launching a business hosting extreme fishing expeditions to all four corners of the world.

He explained he began the project after he and his ‘wonderful ex wife separated’, saying: ‘I thought, now my life is in turmoil and chaos, I now have the opportunity to do something off the beaten track. And I wanted a chance to do something really special.’ 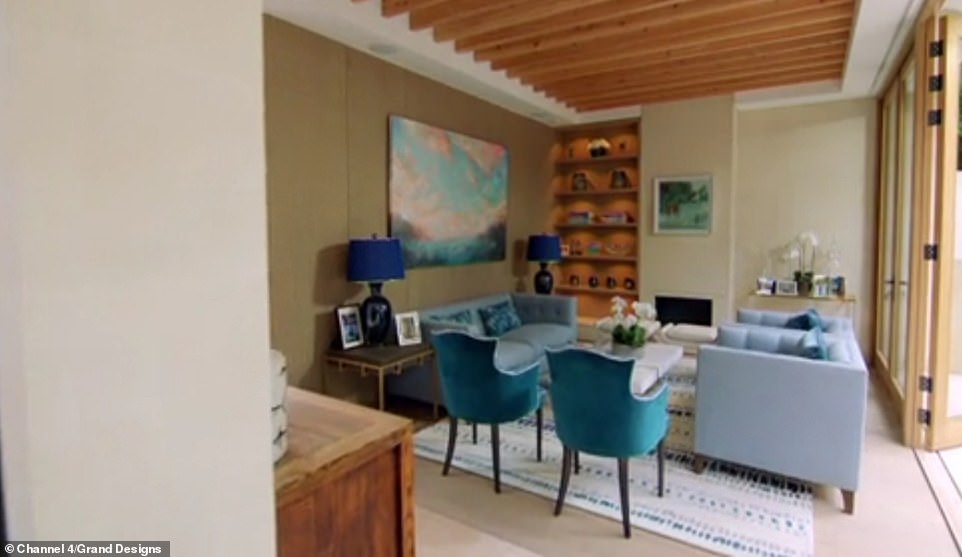 Justin was able to demolish the ex council block of toilets and build a stunning extension onto the original keeper’s lodge, with light flooding into each room through large windows (pictured, the lounge) 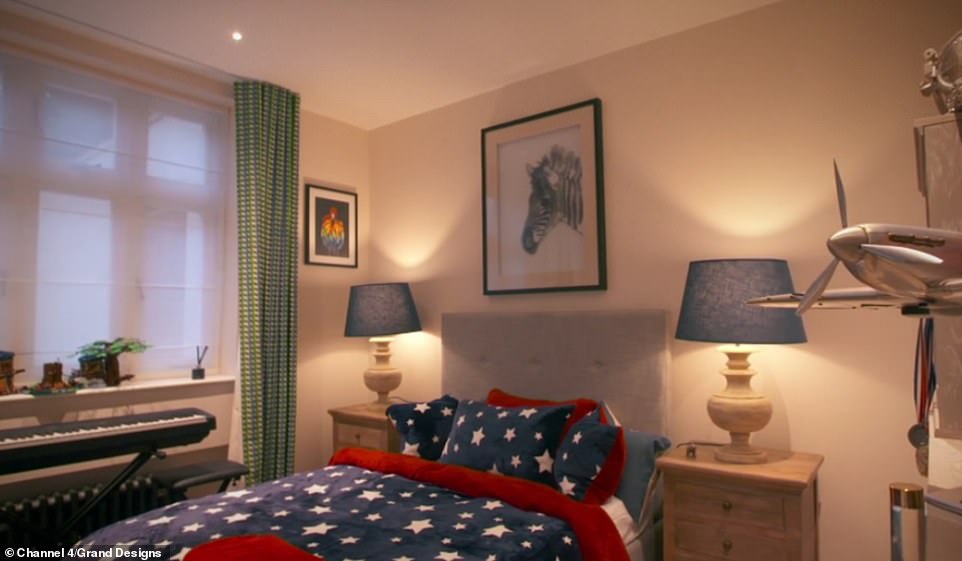 Meanwhile the former army officer said the access to the graveyard was one of his main motivations in buying the lodge house and, subject to further planning permission, he hoped to install a gate from his garden to the graveyard.

He said: ‘I don’t think of them as my dead neighbours, they’re just my neighbours. And come the witching hour, when they close the gates to the cemetery then it really is my area.

‘It’s going to be a grand castle sort of statement. And then my folly – a pool.’

A local architect worked out the design, with plans to properly repair the Neo Gothic lodge while the toilet block would be demolished. 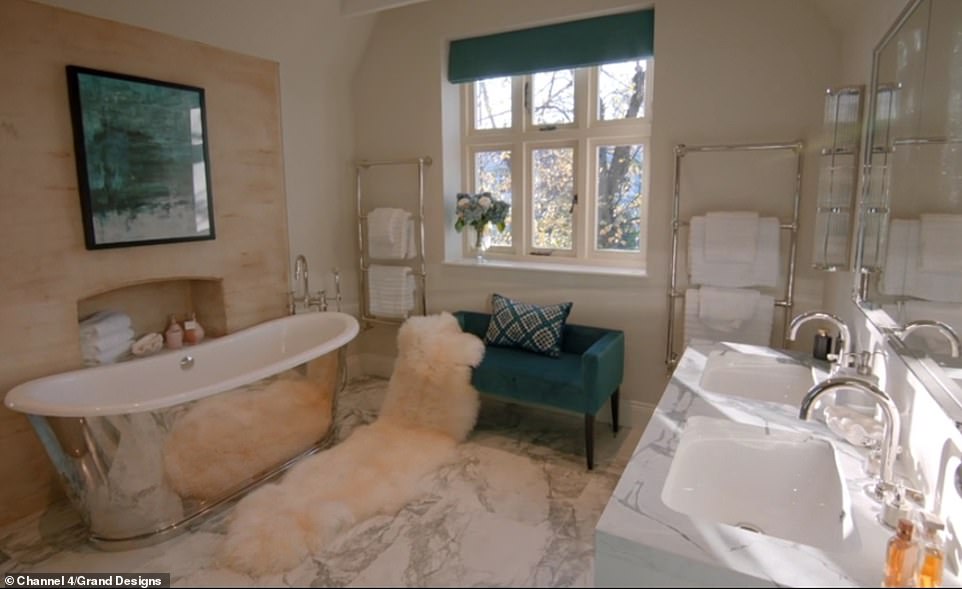 Setting out on the enormous project, Justin revealed he hoped to make the gateskeeper lodge into his very own ‘grand castle’ with rooms that made ‘a statement’ (pictured, his completed master bathroom) 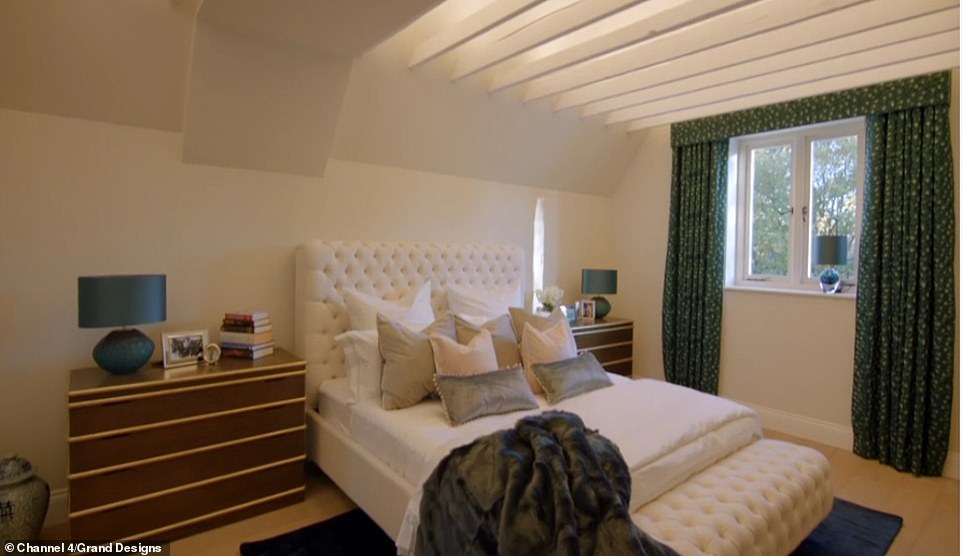 Meanwhile the master bedroom took over the entirety of the first floor of the home, offering Justin a leafy view into the graveyard beyond 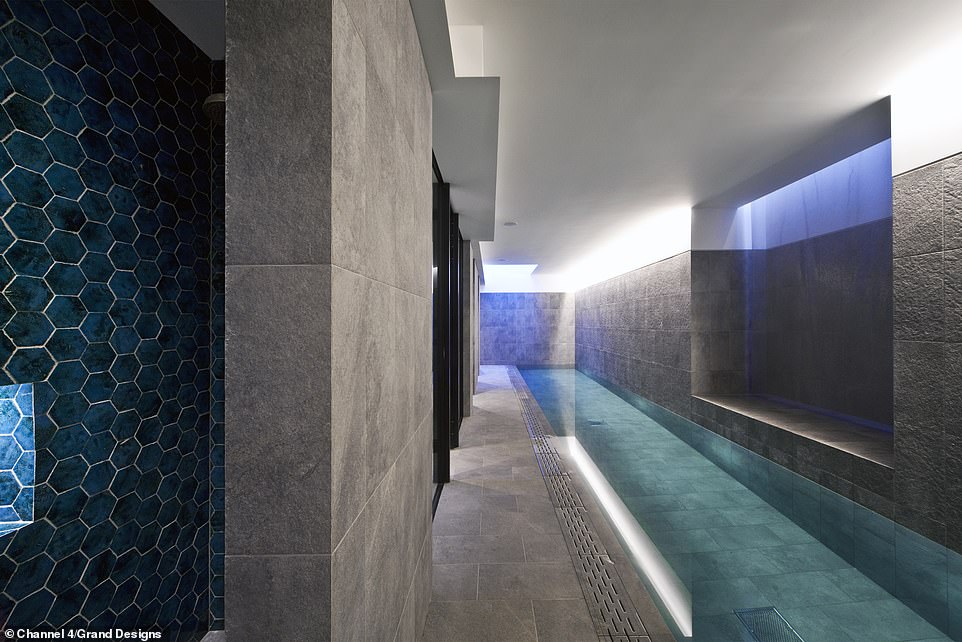 Planning restrictions stopped Justin from building up, so instead he planned to dig down by six metres to form an enormous basement, mere meters from the nearest grave.

There would also be an excavation under the lodge itself and, above, a flat roofed ground floor extension will connect it to the Neo Gothic lodge.

Given where it was, there were a vast array of planning restrictions but Justin said he hoped to complete the project in just one year.

He explained the project was budgeted at £1.6 million, but confessed he had only managed to find £1.2 million to start the project. 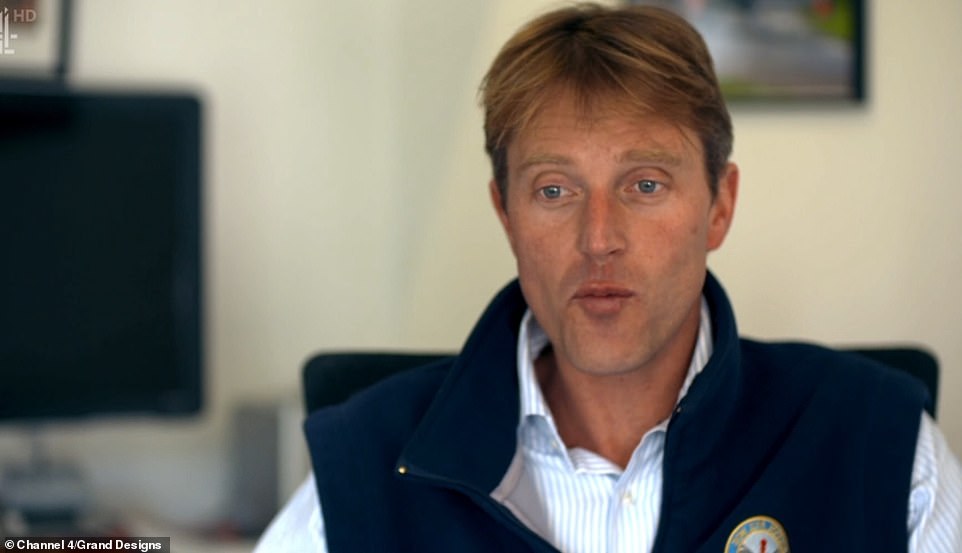 The former army officer was left flummoxed after he was told the total project cost would be £4 million, and desperately fought to keep costs down

He said 60 per cent of the funds ‘came from his savings’ while he was also ‘given a loan by his mother’, before obtaining a mortgage against the lodge and his other houses, adding: ‘In my mind there is a fear I’m heading down a catastrophic black hole.’

But it was not long before Justin hit a stumbling block, with the businessman left stunned when builders came back to him with a budget for the project.

His quantity surveyor helped him revise the budget, but the new estimate remained stubbornly high at £2.1 million. 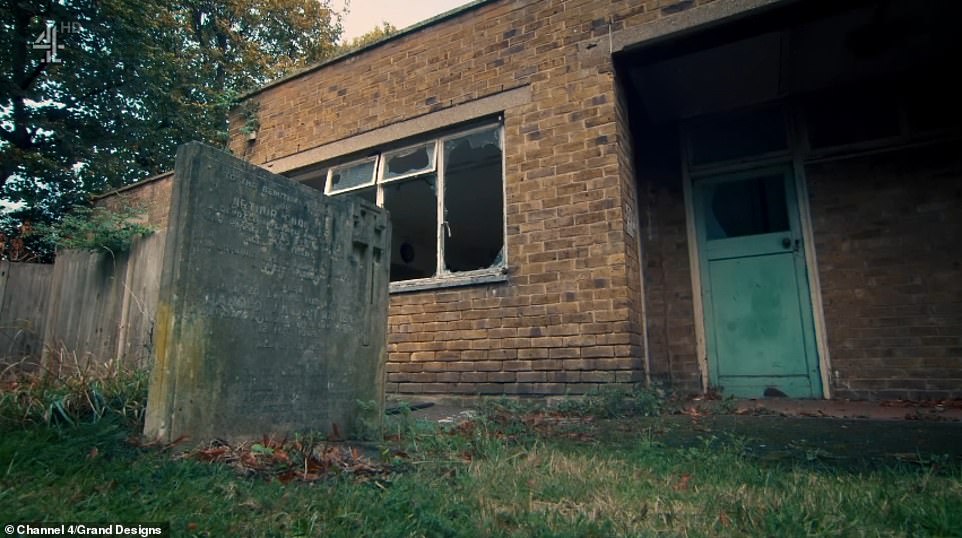 Justin paid a total of £1.8 million to purchase the derelict ex-council toilet block and keepers lodge in the cemetery in London in 2016

Justin called it ‘a bit of a shock’, saying: ‘I haven’t quite worked out how to pay the end bill. I just know there’s going to  be a balancing equation between selling this and a larger mortgage and working harder.’

By October 2017, Justin began the demolition of the toilet block, saying: ‘What a fabulous feeling, we’re finally going, we’re off to the races.’

The schedule was extended from a year to a more realistic 20 months, which gave eight months for a specialist contractor to demolish the toilets and build the basement, and 12 months for a separate constructor to fill out the extension and lodge.

Two weeks in, they started to excavate the basement, but they had to be delicate so they didn’t dig up any graves. 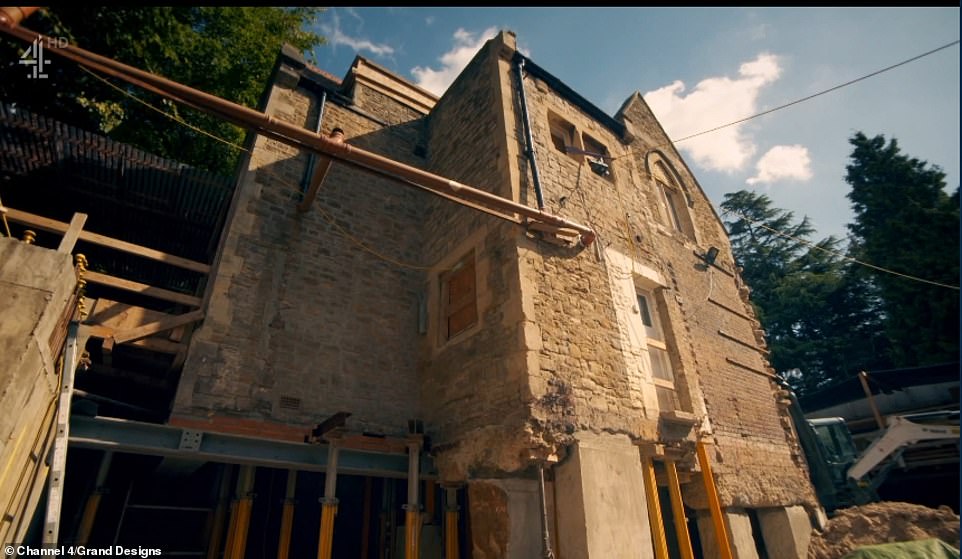 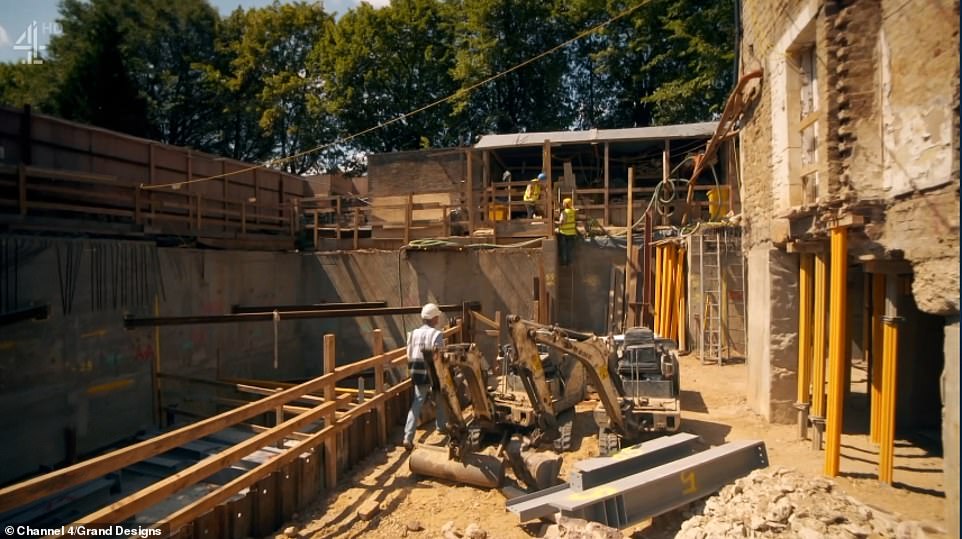 Justin confessed that throughout the build, his greatest fear was the team uncovering bones or a body, yet managed to scrape through without any unwanted discoveries

The contractor said that ‘not everyone was happy to work’ on the project because of its location in the graveyard, saying: ‘We have got half the team, they prefer to not work in here.’

On site, Justin’s immediate fear was that the team find a grave, with the former army officer confessing: ‘One just has to be aware that when your’e digging in an ancient site.

‘Worst case scenario is we find one of Henry VIII’s wives.’

By April 2018, the basement walls were being built but Justin said he ‘had a few design changes’, saying: ‘What was supposed to be a basement alongside the house has now turned into a full dig underneath the house.’ 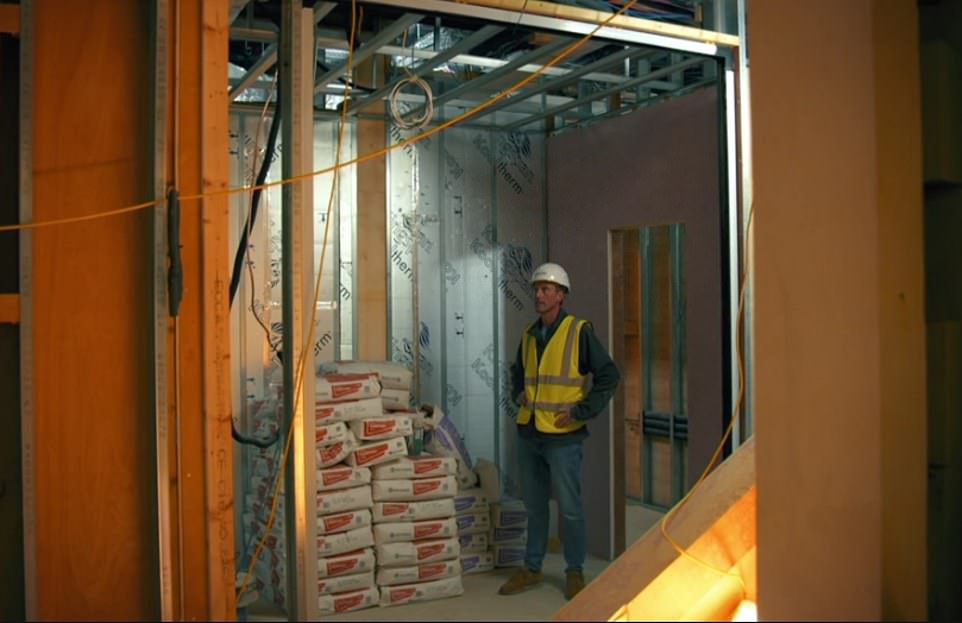 After the basement was constructed, Justin confessed he ‘hadn’t costed it’ but said he was determined to carry on with the project despite his spiraling debt

He said he ‘hadn’t costed it’, adding: ‘In the digging phase, the cash is still here. It’s when we get to the furnishings, that’s when I’m a bit nervous.’

Four months on,  the team attempted to support the structure with steel, and were unable to start work on the basement because of fears the main lodge will collapse.

But by February 2019, the shell of the basement was finally complete, with Justin saying the project had gone way over his estimated time.

He said: ‘I had it in mind that it would be a year and a bit. And that was miles out.’ 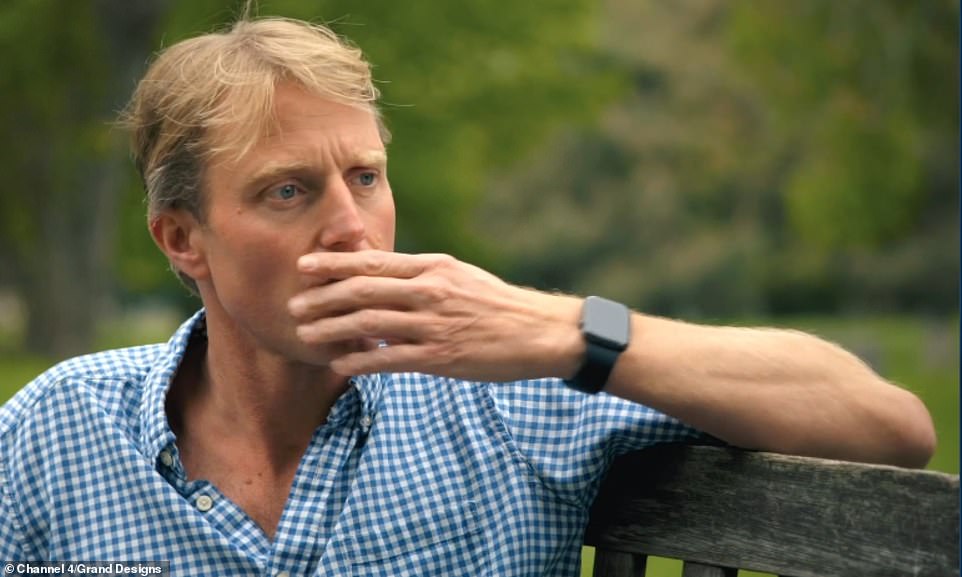 After over two and a half years working on the project, Justin confessed to Kevin that the spiraling costs were keeping him up at night 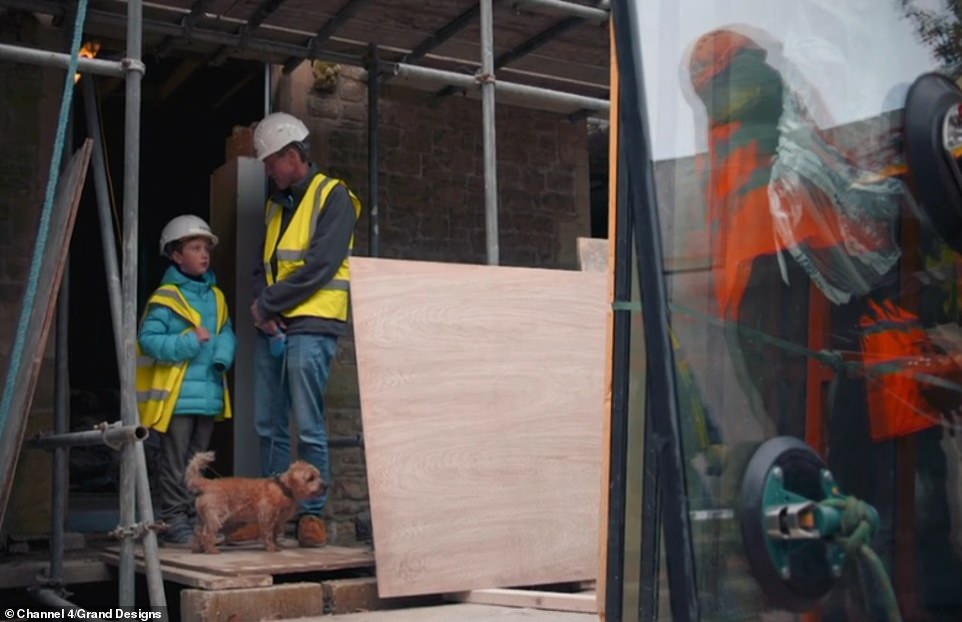 The above ground and fit out phase began in April 2019, with Justin confessing he ‘wakes up with a cold sweat on thinking, “Have I made a massive error?”‘

He said: ‘We are approximately at £1 million. It seems like an expensive hole in the ground. I would say £1.5 million is where I want to be.’

When Kevin told him the project could cost £4.5 million in total, Justin said: ‘I’ve gone too far into it, it’s a case of leveraging against other property.

‘I’m short by maybe a million. The problems are live and they keep me awake like they would anyone else.’ 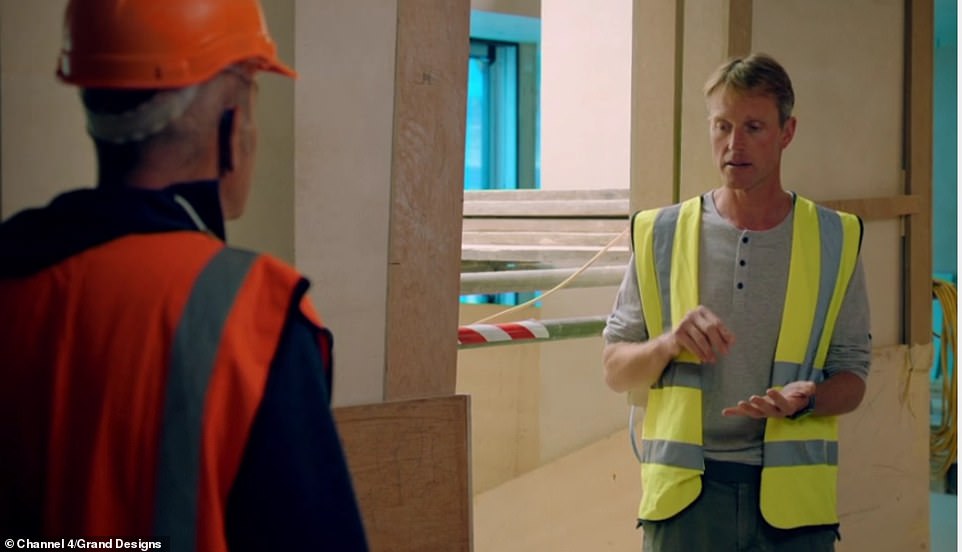 As Justin reached the end of his project, disaster struck and the Covid-19 pandemic further delayed the completion of the build and almost destroyed his travel business

The only way he could finish the project was by taking on another £1 million of debt.

But in July 2019, Justin’s dream hit another major roadblock when the council told him he couldn’t have direct access to the cemetery from his garden.

Justin was devastated by the news, confessing it had been one of the major reasons he had invested in the lodge house.

As the build ploughed into its final stages, the father-of-one said he was concerned that the basement might be too dark, saying: ‘I am feeling anxious. 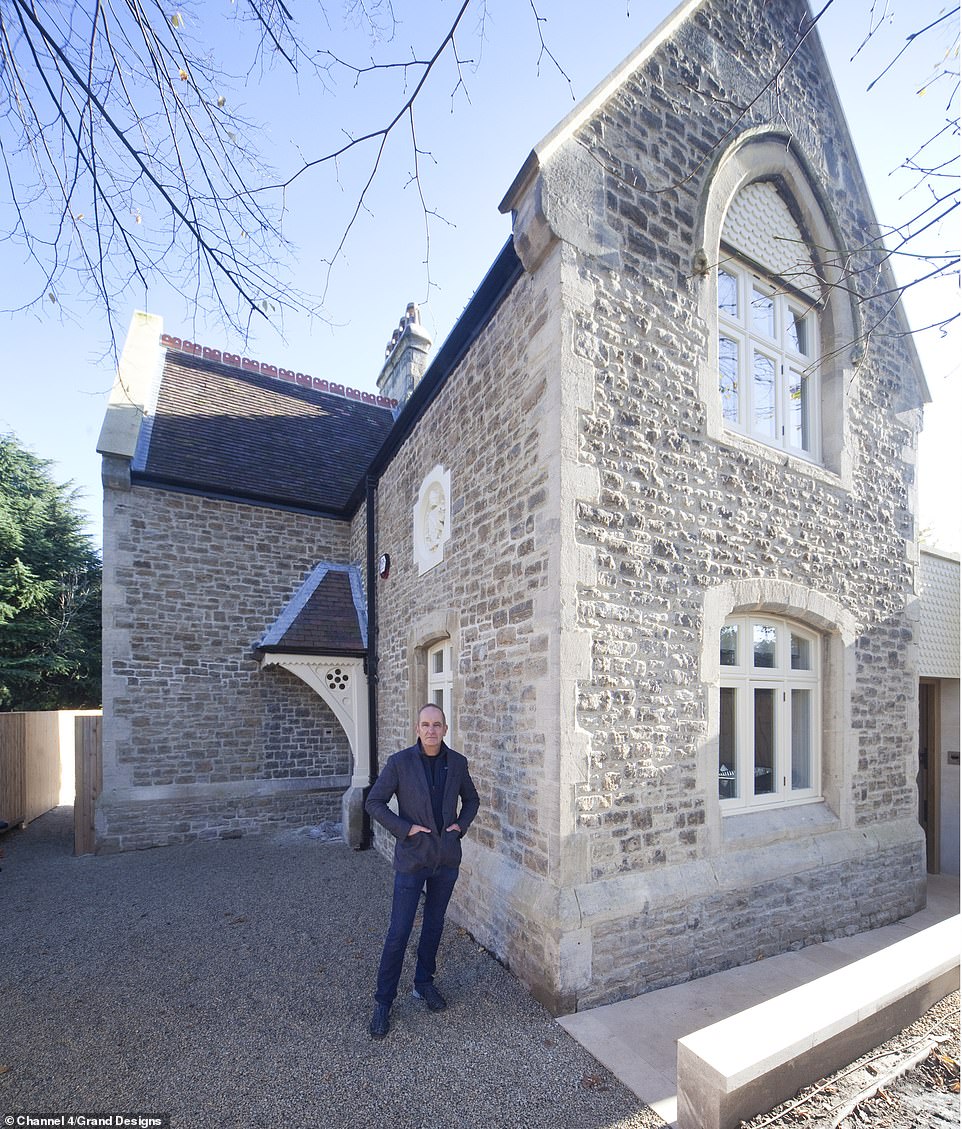 After four years, the selfbuilder invited Kevin back to explore his home, unveiling the stunning renovated keepers lodge to the presenter (pictured, presenter Kevin McCloud outside Justin’s home) 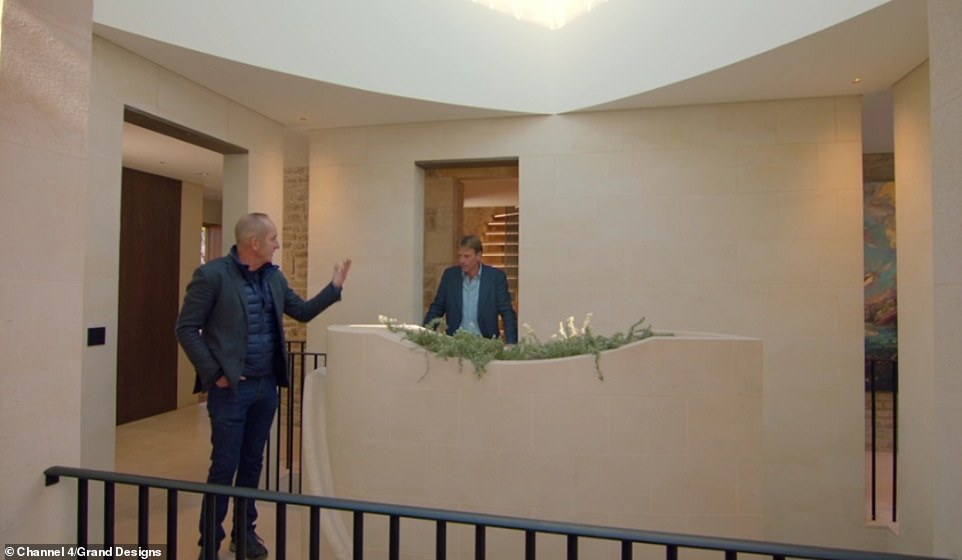 The pair were particularly impressed with the magnificent entrance way to the home, which featured cream stonework and a huge sky light 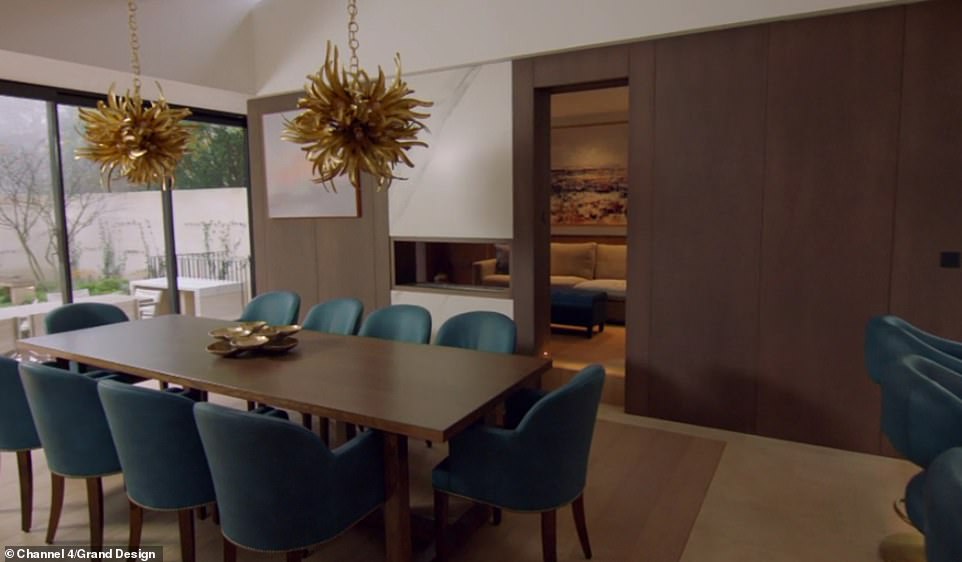 In place of the toilet block, Justin built a flood-lit living area, with a huge dining room and kitchen with blue tones to remind him of the ocean

‘It’s fundamental we get this right. We’re at a phase where the cost of the project is really starting to mount up. [I’m thinking] Is this making sense?’

Speaking to Kevin about the cost, Justin said he had remortgaged two of his properties to help him fund the rest of the project, saying: ‘I’m not even going to entertain the idea it’s going to cost another £100,000. You have a reserve for a reason, and I have deployed it.’

Yet, when the Covid-19 crisis hit, all work stopped for three months.

In July 2020, Kevin revisited the site, with Justin explaining the pandemic had had an enormous impact not only on the build, but also on his livelihood. 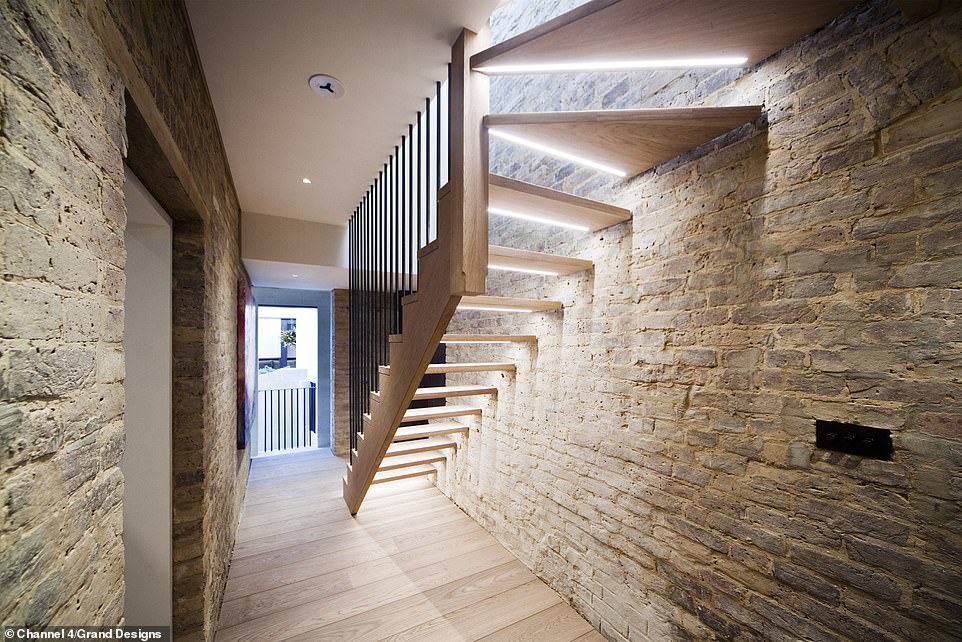 The father-of-one said he was overjoyed with the completed home, which he hoped he and his son could enjoy for years to come 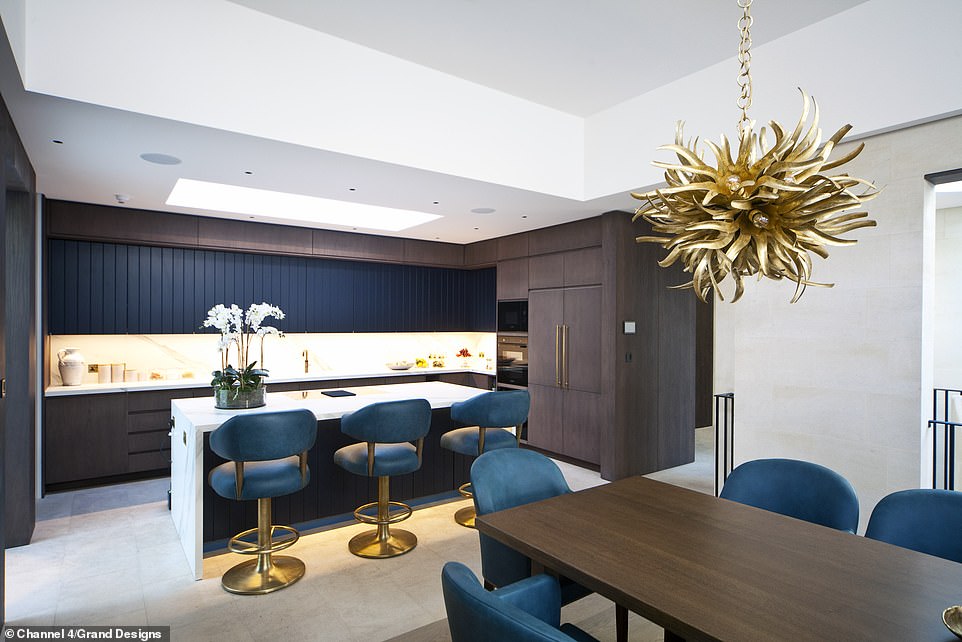 Justin furnishings his stunning home in trendy turquoise and brown tones, with added accents of gold (pictured, the kitchen and dining room) 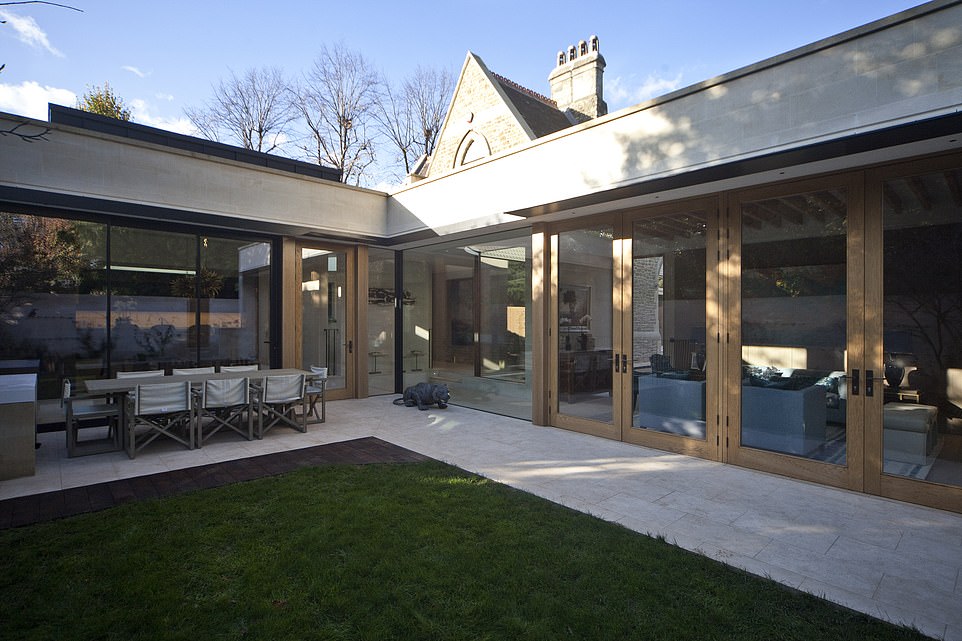 He said: ‘I have spent the last three months writing cancellation letters, asking if they can defer their stress. All the pressures of trying to get this thing finished…’

But by November 2020, Justin managed to complete the project as Kevin praised the former army officer for making the build as ‘stunning’, adding: ‘It’s so exceptional to find in the centre of London. What’s glorious is the space and the light and the view into the garden.’

The home boasted four bedrooms, including an enormous master suite with en-suite and dressing room, a reading room as well as a stunning lounge and kitchen-diner.

Kevin compared the huge basement to a ‘Playboy Manor’ with an extravagant wine cellar, a huge TV room with its own bar, and the 13 metre swimming pool. 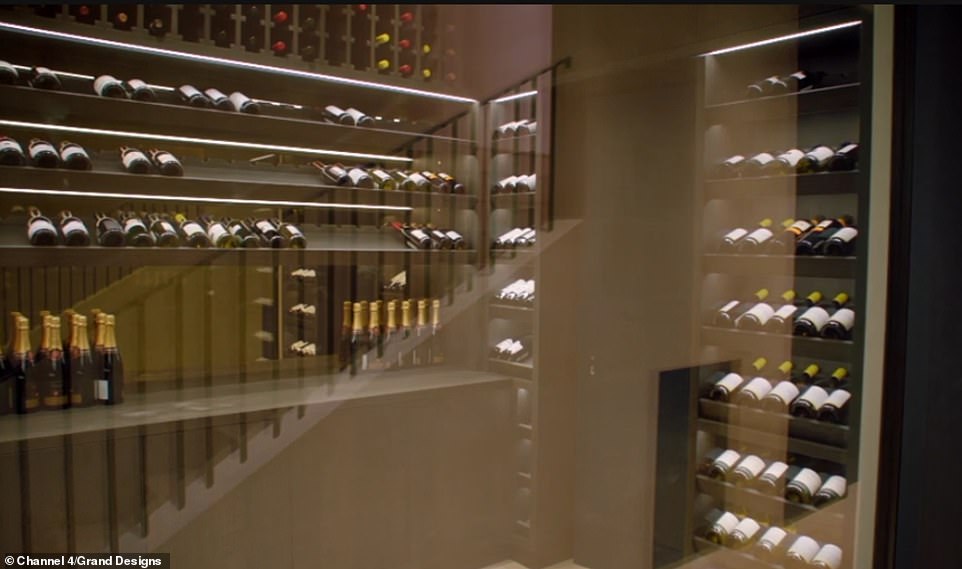 Meanwhile Kevin compared the basement to the ultimate bachelor’s pad, with a huge wine cellar, games room and a swimming pool

Justin said he was ‘delighted’ with the property, saying he was: ‘Not a lord of the manner, but a gatekeeper.’

Meanwhile Kevin pushed the former army officer to discuss his financial situation, saying: ‘Let’s cut to the chase. You’re all in now – for £4.5 million?’

Justin explained: ‘It’s not a figure I’m comfortable with. It was a rollercoaster once I started. It has been a terrifying financial rollercoaster.’ 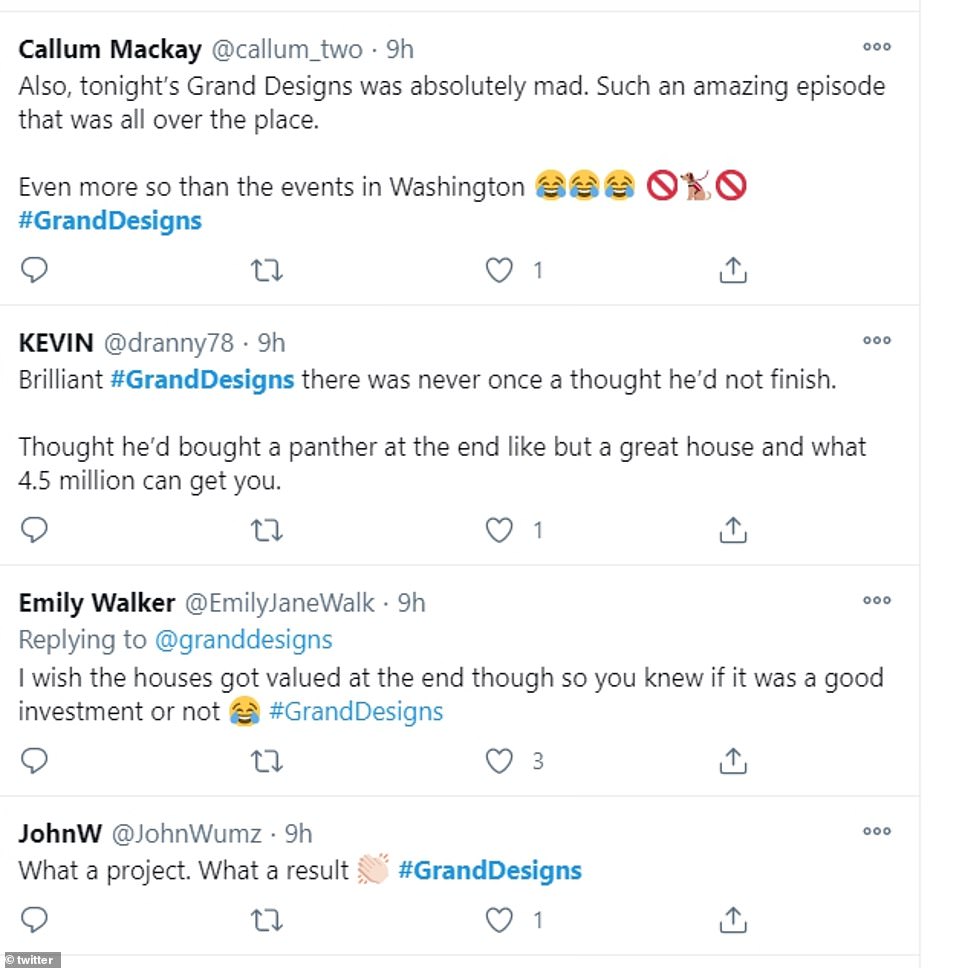 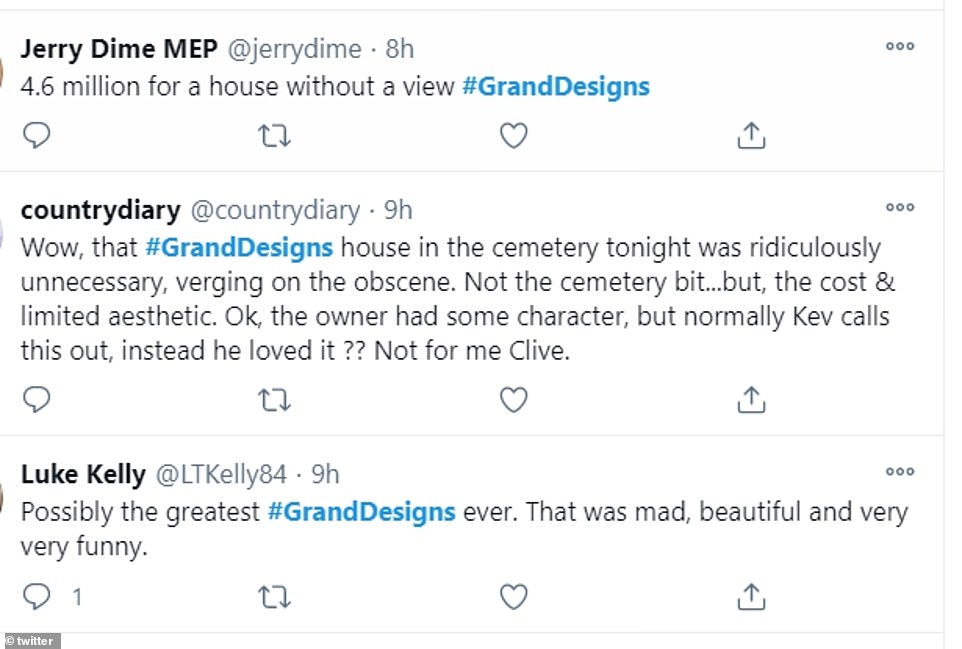 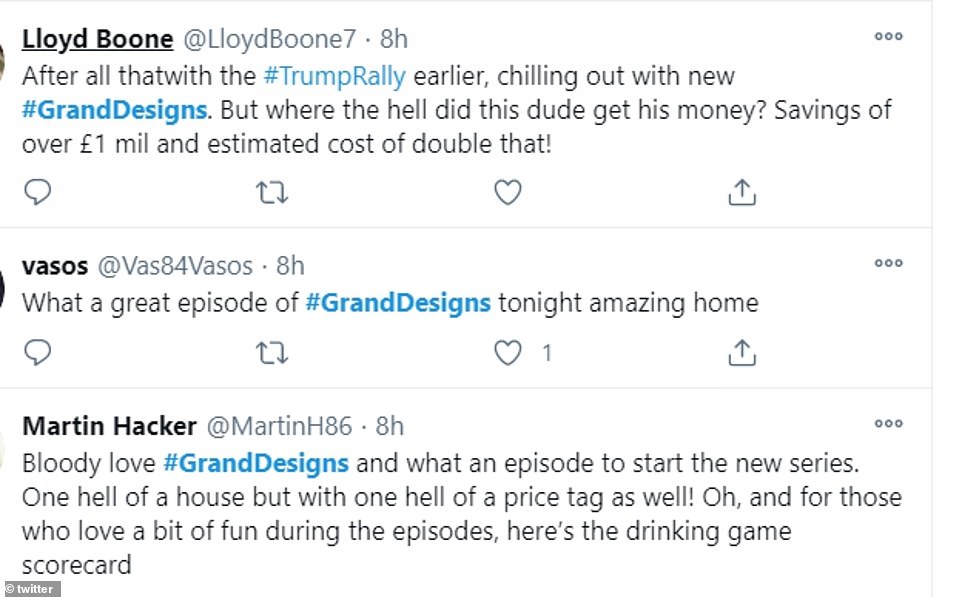 Social media users were blown away by the episode, with some saying it was among the best episodes of the hit TV series ever

He said he would ‘never’ have started it if he had known it would take 4 years and £4.5 million.

Viewers branded the episode ‘one of the best Grand Designs ever’, with one commenting: ‘What a great episode of Grand Designs tonight, amazing home.’

Another wrote: ‘Brilliant Grand Designs. There was never once a thought he’d not finish.’