A father cried out ‘is this really happening’ after finding his three daughters dead at his new home in New Zealand days after being release from quarantine, his neighbours have said.

Orthopaedic surgeon Graham Dickason ‘wailed’ after finding two-year-old twins Karla and Maya and their older sister Liane, six, at their home in Timaru.

Mr Dickason discovered the tragedy shortly before 10pm on Thursday when he returned home after attending a work function at Timaru Hospital.

His churchgoing wife Lauren, 40, a fellow doctor, stood silently while appearing in the dock at Timaru District Court last night after being accused of murder.

Mrs Dickason looked drawn and distressed as she entered no plea and was remanded to a secure mental health unit until her next appearance, at Timaru High Court on October 5.

The couple, married for 15 years, had only been released from 14 days enforced Covid quarantine in a hotel following their life-changing flight from South Africa to start a new life days before the alleged murders.

Neighbours speculated stress after being quarantined ‘for so long’ could have left Mrs Dickason unable to cope.

The young family (pictured together) had just moved to New Zealand from Pretoria, South Africa and recently finished their 14-day hotel quarantine 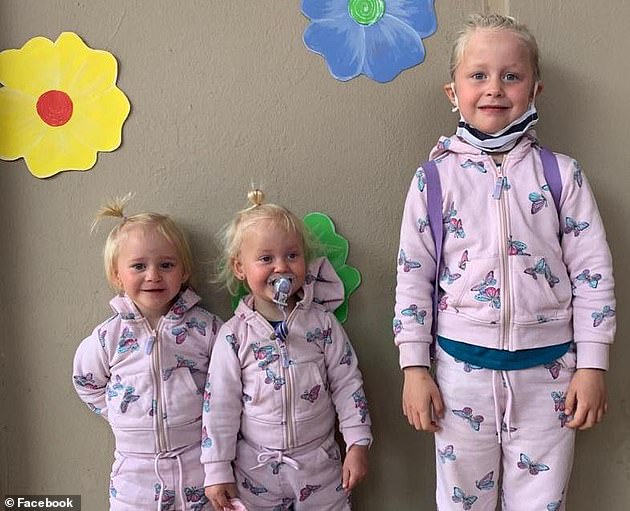 There was nothing in their background to suggest a troubled family, according to their long-standing nanny in Pretoria, Mendy Sibanyoni 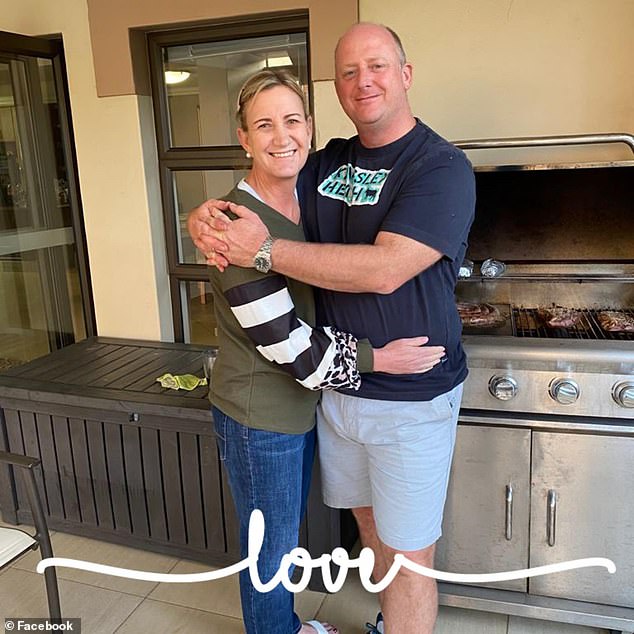 The children’s father Graham Dickason, who is an orthopaedic surgeon, had returned to their Timaru home at around 10pm on Thursday where he discovered the children’s bodies. Pictured: Graham and Lauren

Neighbours in Timaru described distressed wailing shortly after Mr Dickason arrived home on Thursday night and watched as he was consoled by another doctor who lived next door.

His wife was taken to hospital after police arrived minutes later.

Mr Dickason was heard by neighbours screaming ‘is this really happening?’ when he arrived home.

Another resident, Karen Cowper, described hearing a man crying and saying ‘is this really happening?’.

‘We asked him if he was okay. He did not respond to us and was screaming and crying hysterically,’ Ms Cowper said.

A former neighbour in South Africa, who did not want to be named, said the couple were very ‘grateful’ for their children.

‘They absolutely adored those children. They were so grateful for having them because they struggled to get pregnant and when they finally got the children, they loved them,’ the neighbour said.

‘Something just doesn’t add up. I don’t know if it’s the stress from New Zealand, moving there, being quarantined for so long and everything – just not coping with that going on.

Churchgoing doctor Lauren Dickason, who struggled for years to get pregnant, appeared in court last night charged with murdering her three young daughters. Above: Mrs Dickason with husband Graham, two-year-old twins Karla and Maya and their older sister Liane, six 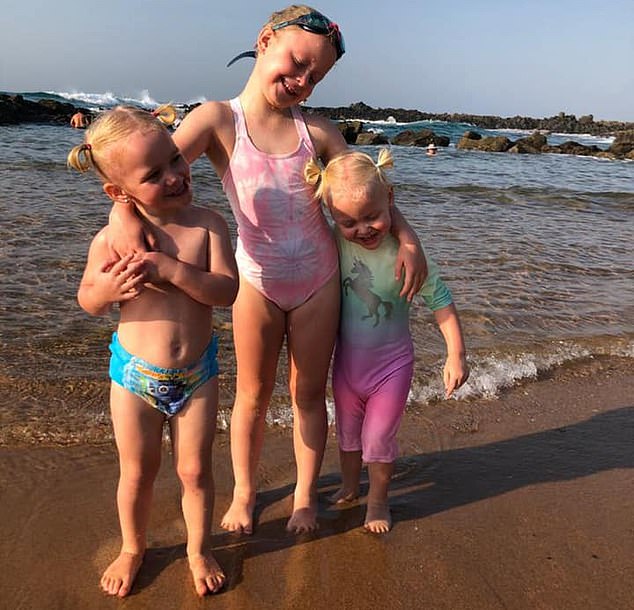 Many details were suppressed under New Zealand law and no cause of death for any of the three girls has emerged. Above: Mrs Dickason’s children

Just four months ago, Mrs Dickason had paid a loving public tribute to her husband on Facebook, writing: ‘Happy 15th wedding anniversary … What an adventure,’ she wrote

‘So I think whatever happened is not normal, it wasn’t normal circumstances,’ the neighbour said.

The girls’ grandmother said the family was struggling to comprehend what had happened.

‘It hasn’t actually sunk in yet. We’re in a terrible state of shock. We are devastated,’ she told Stuff.

But the couple’s long-standing nanny in Pretoria Mendy Sibanyoni said there was nothing in their background to suggest a troubled family.

Both parents had ‘loved their kids like nobody’s business,’ said Mrs Sebanyoni, who Mrs Dickason had described in a Facebook as an ‘angel’.

Just four months ago, Mrs Dickason had paid a loving public tribute to her husband on Facebook, writing: ‘Happy 15th wedding anniversary … What an adventure,’ she wrote.

‘We have truly created a beautiful family and had many good times together. May the next years be more blessed, more happy and may the kids let us sleep.’

Through her lawyer, she initially applied for name suppression but withdrew the application after media objections.

Many details were suppressed under New Zealand law and no cause of death for any of the three girls has emerged. 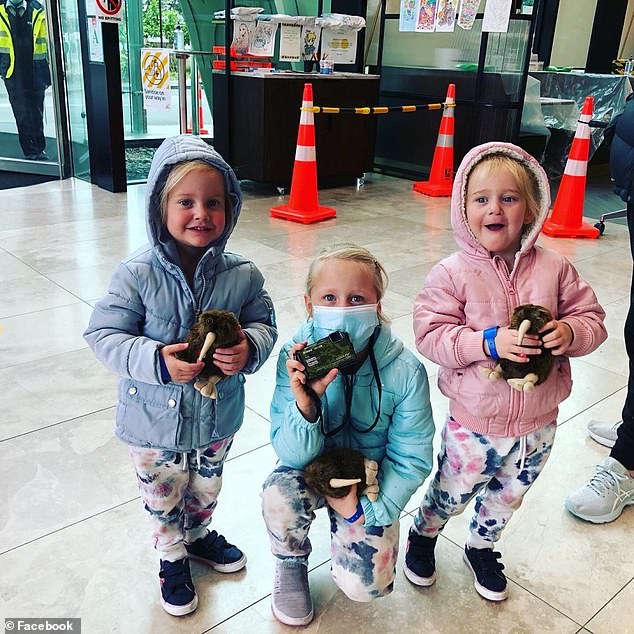 Judge Dominic Dravitzki ordered a report under New Zealand’s Crimes Act to ascertain Mrs Dickason’s state of mind at the time of the killings.

She was led from the cells wearing a light grey hoodie and black trousers to make a brief appearance to hear the charges for the first time last night.

Mrs Dickason did not speak during the hearing but nodded briefly when listening to her solicitor Kelly Beazley.

‘I’m torn apart. Part off me is gone,’ Mrs Sebanyoni told South African media. ‘And it’s like those kids, they are my kids too because I raised them. They were such nice children.

‘I don’t know what to do about this because the only question that I’ve got now is, what happened? What went wrong?

‘I never saw any fight in that family or anything. We treated each other as family. I was family too. There was nothing wrong.’

Mrs Sebanyoni, who had tried unsuccessfully to contact Mr Dickason in New Zealand, said the three girls were all polite and well-mannered.

‘They listened when you told them not to do that, and when they wanted something they would ask,’ she said.

‘We used to play outside and take a walk on the streets. When I come in they used to be excited that Mendy is here. They would say goodbye to their mother and ‘we are going to play with Mendy.’ 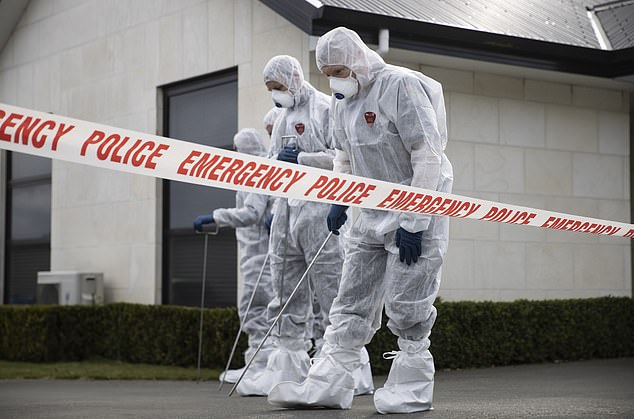 A former neighbour said the couple had struggled to conceive their children and were dedicated and loving parents. Pictured: Police tape protects the scene on Queen Street in Timaru, New Zealand’s South Island

Mrs Dickason was described as ‘very humble’ and ‘the nicest person’, by a former neighbour in Pretoria.

‘I cannot comprehend what happened — she is a medical doctor and she wasn’t arrogant or anything like that.

‘She was really just a nice person, she and her husband.’

According to information on her Facebook page, Mrs Dickason went to Pretoria High School for Girls before reading medicine at Cape Town University.

She graduated in 2004. In 2007 she became a GP at Pretoria East Hospital Orthopaedic Theatre.

The former neighbour said the couple had struggled to conceive their children and were dedicated and loving parents.

‘They waited years for those children because she had troubles with fertility and stuff, so it really is a big shock,’ Mrs le Roux said. 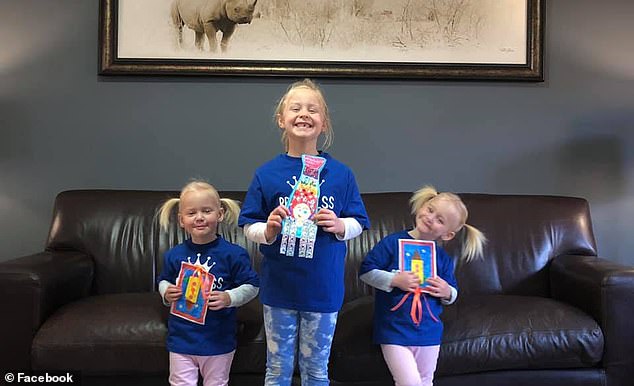 In South Africa, the girls’ grandmother said the family was struggling to comprehend what had happened. Pictured: The twins, Maya and Karla and sister, Liane

The only sign of distress in Mrs Dickason’s life came in a Facebook post in March which referred to mental illness suffered by Hollywood stars Demi Lovato, Robin Williams and Carrie Fisher.

Underlined in red was a section which read: ‘Unfortunately we live in a world where if you break a bone everyone comes to sign the cast but if you tell people you’re depressed they run the other way.’

A photograph posted on social media on August 30 shows the three girls happily clutching little kiwi cuddly toys with beaming smiles as they arrived in the country.

Earlier this month the mother took to social media asking for help as they prepared for the move.

She had asked for advice about buying furniture in Timaru and wanted to know which schools would be best for her children.