EXPRESS INFORMER > News & Politics > Father, 81, who died of Covid leaves behind six children who ALL work on NHS frontline

A father who died of Covid despite shielding has left behind the ultimate legacy – six children who all work on the NHS front line.

Tributes have been paid to Ahsan-ul-Haq Chaudry – who died aged 81 at the East London hospital where his daughter works – commending his hard work in raising an ITU doctor, two GPs, a junior doctor, a paediatric consultant and a pharmacist.

The proud father came to UK in the late 50s as an impoverished 19-year-old after fleeing partition violence in India and later working multiple jobs to support his children through education.

All six of the siblings have all been at the sharp end of the NHS’s fight against Covid-19 and sacrificed time with their father last year so they could care for others battling the virus.

Ahsan-ul-Haq Chaudry, who died aged 81 on December 28 from coronavirus, pictured with members of his family

Mr Chaudry died from coronavirus on December 28, despite abiding by all government guidelines and staying at home in East London since March last year.

He was initially admitted to the accident and emergency department where his son had worked, and later died at Queen’s Hospital, in Romford, where his GP daughter worked treating Covid patients as they arrived.

His family have paid tribute to their ‘humble’ dad for giving them the support to fulfil their dreams despite limited financial means.

Mr Chaudry, a retired maths and computer science teacher, had lived an active lifestyle until the start of the pandemic.

But his age and underlying health conditions meant he had to shield since the first outbreak. 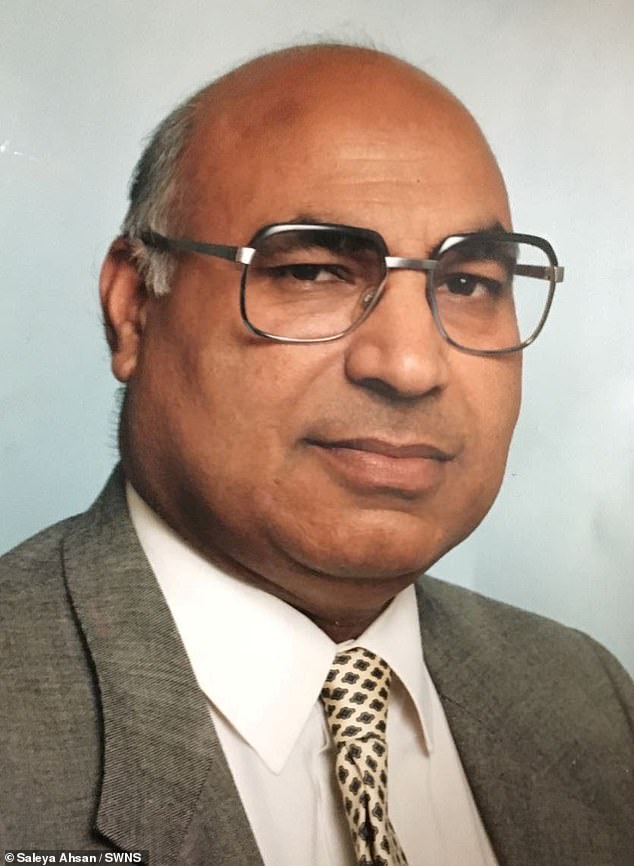 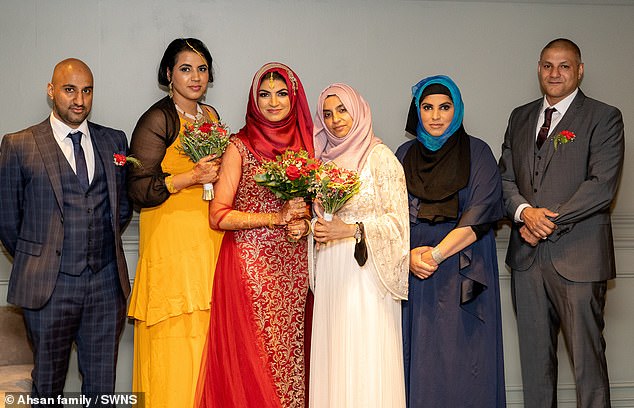 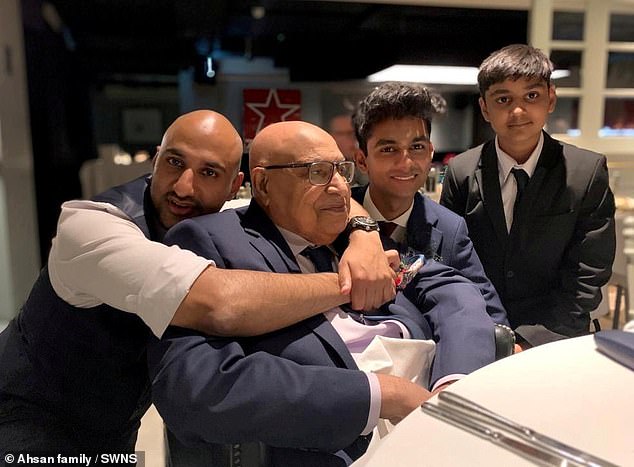 Dr Shoaib Ahsan and his father Mr Chaudry. His family have paid tribute to their ‘humble’ dad for giving them the support to fulfil their dreams despite limited financial means

He was tragically just weeks away from having the vaccine when he died with his daughter – ITU doctor Dr Saleyha Ahsan – by his bedside.

She had dealt with Covid patients throughout the pandemic, but said nothing could have prepared her for watching her own dad deteriorate so rapidly.

And she said they are only now taking stock of his extraordinary life and starting to understand the legacy he left behind.

She said: ‘He had six children, including five doctors and one pharmacist, and we have been tackling Covid all year. It’s been brutal.

‘We all stayed away from our father for extended periods to keep him safe as we were seeing and caring for Covid patients. 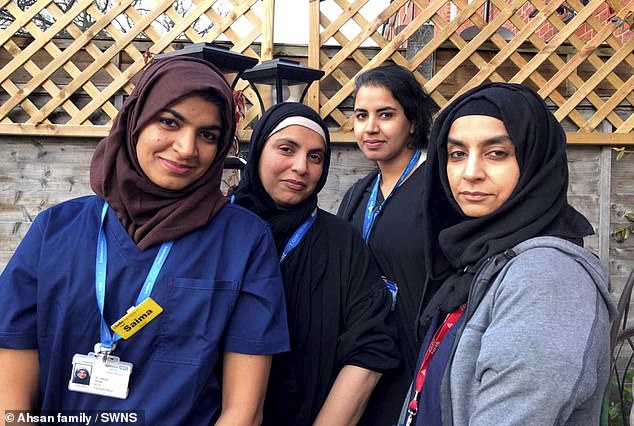 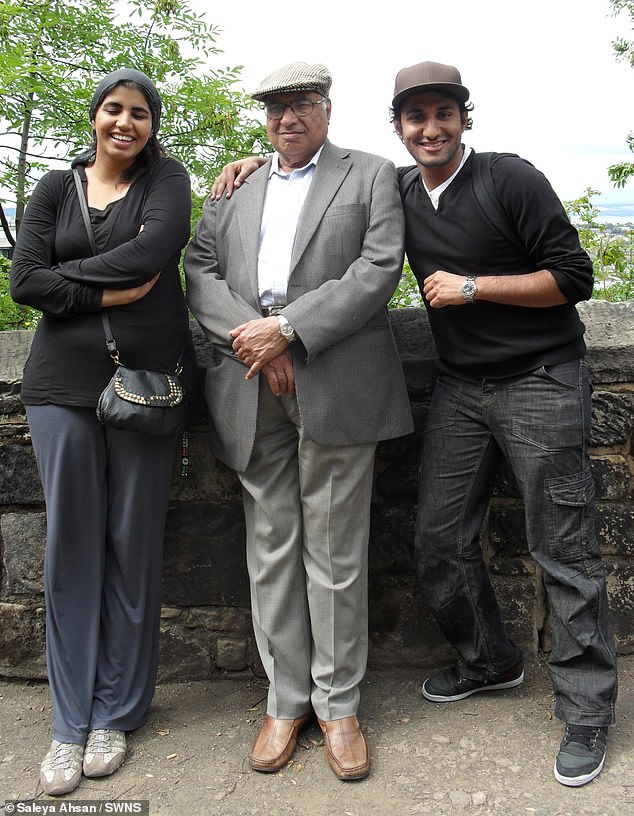 Mr Chaudry with members of his family. He was widowed when his wife Fauzia Ahsa died in 2019

‘He shielded all year but somehow it still got through.

‘We never really stopped to consider his legacy until now and it is only now speaking to people about my dad and getting that feedback you realise how special it is.

‘We probably almost took him for granted for what he helped us to achieve. I hope not, but it was just our normal, having our parents support us to do what we could.

‘It is only now stepping back that you realise – what a legacy. I could not have achieved half as much as my dad.

‘What he did as a migrant who came with nothing to building this all up was incredible. He was very humble about it and never made a big deal out of anything.’

Saleyha, 50, began her career as a journalist before completing Army officer training at Sandhurst.

She decided she wanted to get into medicine while serving in Bosnia in 1997, as she felt powerless being unable to help treat trauma victims there. 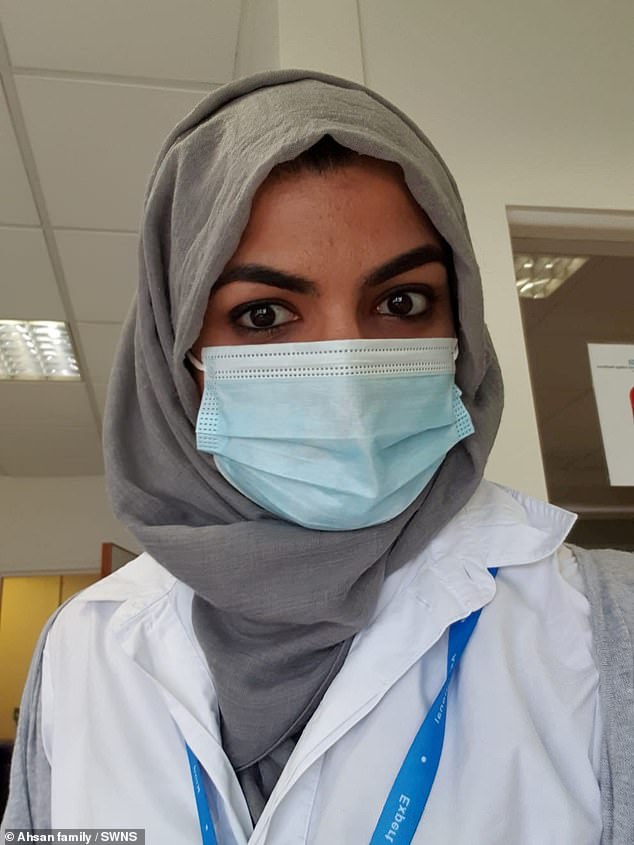 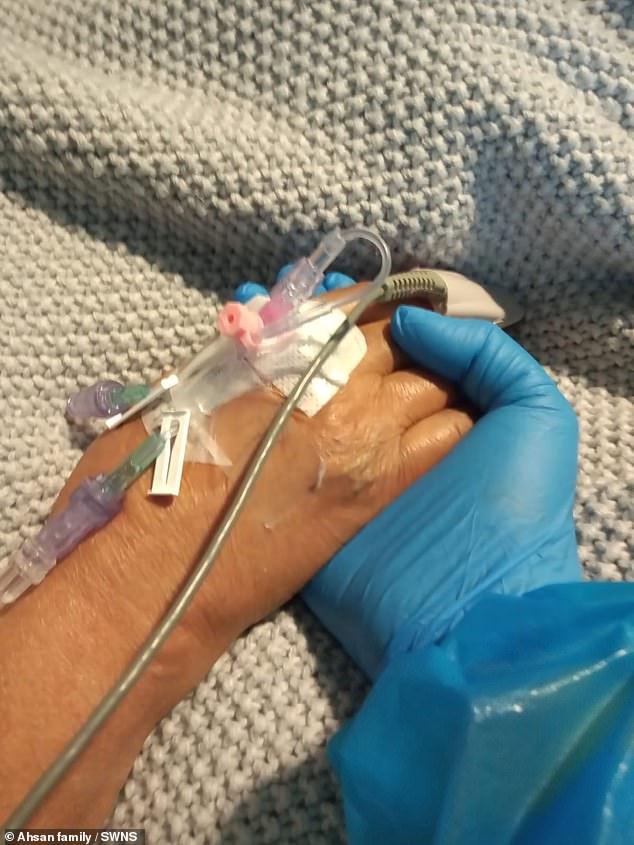 Her sister Syira, 48, had already become a GP after starting training straight out of school while brother Shazlee, 47, became a pharmacist.

Of the younger siblings Saima, 38, is now a paediatric consultant at St Mary’s Hospital while Safiyah, also 38, is a GP. Brother Shoaib, 32, currently works as a junior doctor.

All have been involved in treating Covid patients during the pandemic. 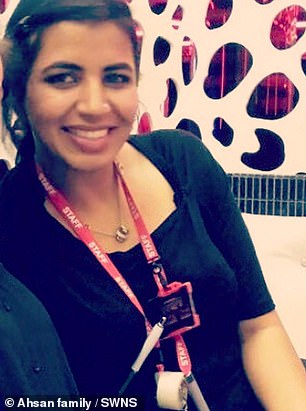 Saleyha, who splits her time between working as a journalist in London and a doctor on ITU in Bangor, Wales, added: ‘I got into medicine at the age of 30, which was late.

‘The others went into it straight from school. My sister was first and became a GP and I think that inspired the others.

‘They all thought about other things, but they all came back to medicine.

‘I guess our brains all work in a pretty similar way and we just wanted to do something that counts and to help people.

‘Despite what his kids achieved he would still get frustrated with us and was still in desperate need to sort out our lives. We could be a dysfunctional lot sometimes, but we have kept grounded as there were no airs or graces about him.

‘He always encouraged us and was very proud – especially when I passed out at Sandhurst, which not many from my background managed to achieve.

‘He was incredibly supportive of all of us.’

Mr Chaudry was just eight years old during the bloody India and Pakistan partition in 1947. He left at the age of 19 and never went back. He was widowed when his wife Fauzia Ahsa died in 2019.

Saleyha added: ‘He left his old life all behind after what he witnessed as a child. 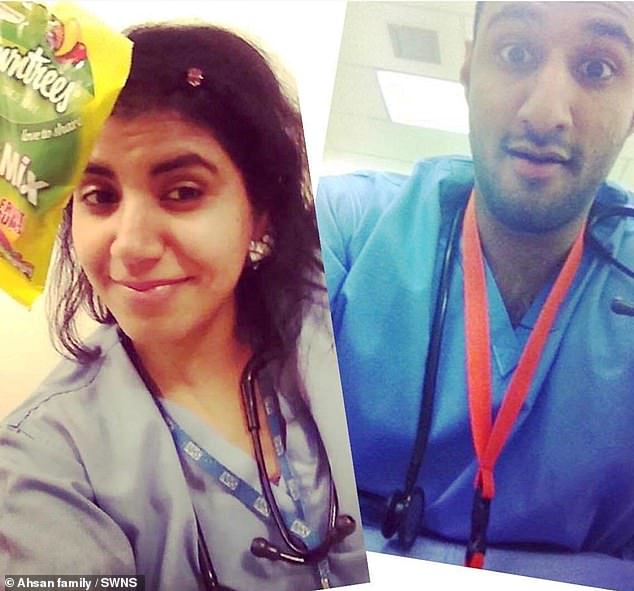 ‘There was a bit of a gap between his first three children and the younger three. They were unplanned, but were a real joy and wonderful for my dad in his later years. They are all in their early 30s now, but he got to do it all again with them.

‘We were not a well off family and he would often work as a security guard at the weekend to make ends meet.

‘When we started to need more support in academic studies to pass exams he would do extra work to pay for our tuition.’

Saleyha said he had become a bit unwell over the last few years and suffered with asthma and heart failure but had got it all under control.

‘He had a busy social life pre-Covid and was very active and prominent in the community,’ she added.

‘He had been shielding all year – we don’t know how he contracted Covid – maybe after a sibling’s shopping trip? Maybe the carer who went out on his day off? We just don’t know. 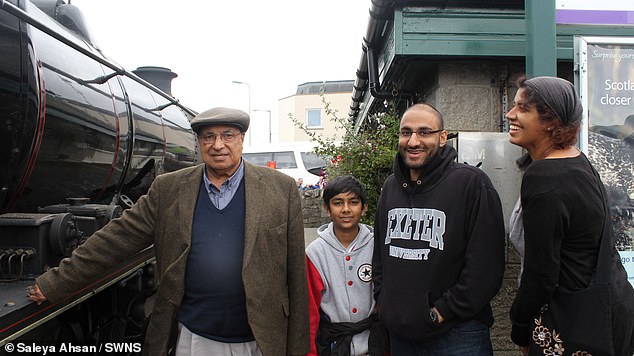 Mr Chaudry had been shielding since the first outbreak, seen with his family

‘We had been as careful as possible but somehow it got through.

‘Covid was really challenging for him as he was confined to the house but he was really strict with himself and kept with it.

‘We tried to work out ways to be safe for him and I was able to become one of his recognised carers.

‘We were just looking forward greatly to all go out again with the arrival of the vaccine. I would make sure I was ten days clear before visiting him but for four weeks in November and December I had been full on shifts.

‘Before I could go to the house he was taken unwell.’

Mr Chaudry was initially taken into the accident and emergency department where one of his sons used to work.

Saleyha added: ‘When he was told it was Covid he just smiled and said ‘That is the thing making everything shut down.’ He coped by diffusing the situation. 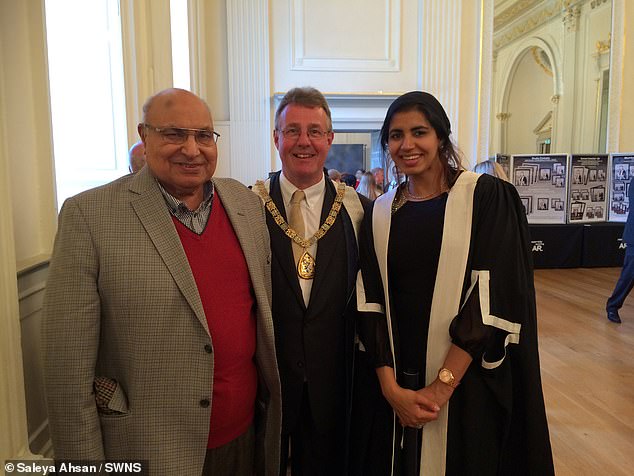 ‘He just took it all as it came and did not complain once.

‘It was hard watching him, but as his full time carer at home I was able to stay with him for five days. I just camped in his room and it was really harrowing and was scary watching your father not able to breathe. Despite 14 years of being a doctor I thought I was going to pass out.

‘I have looked after so many Covid patients but on ITU you are not with them 24/7.

‘They have been incubated and asleep and we hope oblivious to what was going on but my dad was awake the whole time.’

Saleyha urged everyone to take the new lockdown seriously after witnessing the trauma of Covid from both a personal and professional perspective.

She added: ‘All I can say is thank goodness we have had the lockdown as it was clear that a lot of people did not understand the tiers and people were pushing the boundaries.

‘We are in dire straits and people have just got to come together and show some compassion. We need to be selfless as a community to tackle this and just got to get our head down and deal with it. We will come out the other side but we can’t take shortcuts.

‘The last few weeks have been like watching a car crash happen and no-one making any attempts to stop this. During each wave we have had the time and predictions so why is it we have only acted in a reactionary way and not in a preventative one?

‘Sadly, the government is taking people down with them.