A father-of-two was arrested after ‘intentionally’ launching his Tesla with his family inside off California’s ‘Devil’s Side’ cliff, police said.

Doctor Dharmesh Arvind Patel, 41, of Pasadena, was charged with attempted murder and child abuse after he, his wife, also 41, and their two children, four and seven, were found 250 feet down a cliffside on Monday.

California Highway Patrol (CHP) has determined that ‘based on the evidence collected, investigators developed probable cause to believe this incident was an intentional act.’

The radiologist will be booked into the San Mateo County Jail after he is released from the hospital, where he is being treated for non-life-threatening injuries.

Doctor Dharmesh Arvind Patel, 41, of Pasadena, was charged with attempted murder and child abuse after he, his wife, and their two children, four and seven, were found 250-feet down a cliffside on Monday in their Tesla (pictured) 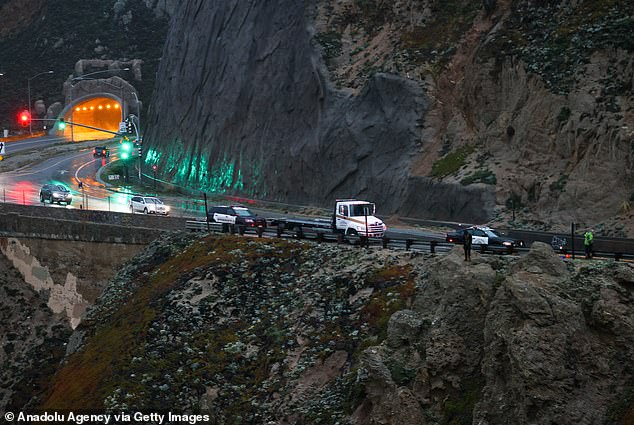 His wife Neha, also 41, also suffered injuries and his children had moderate injuries.

CHP also said it was unsure what ‘driving mode’ the Tesla was in when the crash occurred, but that it ‘does not appear to be a contributing factor in this incident.’

The agency did not elaborate as to why it was believed Patel intentionally drove off the cliffside with his family.

Authorities said they first received a call about a Tesla careening off California’s scenic Highway 1 near Pacifica, and tumbling down the cliff south of the Tom Lantos Tunnel at around 10.50am on Monday.

Robin Johnson was driving by at the time and recalled thinking: ‘Wow, he’s driving extremely fast to take that exit. You’re not even supposed to be going up that way.’

‘And I can see in my rear-view mirror this car just go over the edge and straight down,’ she told NBC Bay Area.

Johnson said that is when she decided to call 911.

About 30 to 50 rescuers immediately responded to the scene and tried to reach the electric vehicle, which was estimated to be about 250 feet below the highway. 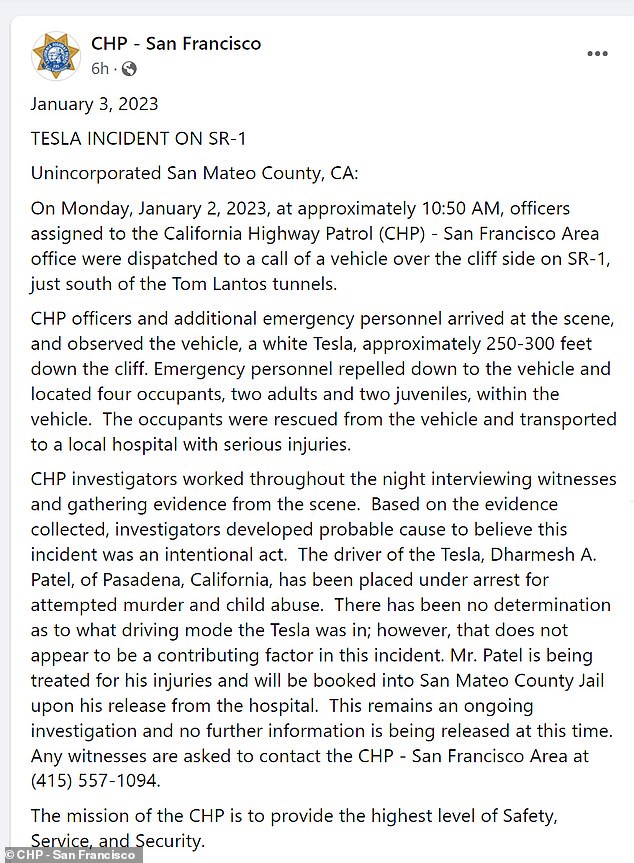 CHP said ‘based on evidence’ it determined there was ‘probable cause’ the accident was intentional, but it is did not elaborate on what evidence brought them to that conclusion

Rescue teams used ropes to rappel down the slope carrying Jaws of Life with them to breach the door, the San Francisco Chronicle reports.

They were not expecting to find anyone alive inside the vehicle and were surprised when they found all four people alive and conscious inside.

At that point, the crews worked to the children from the car first, KTVU reports, and were able to hoist them up to the road with ropes. Once back on land, they were put on stretchers and assessed for any injuries.

But authorities still had to rescue the parents — and needed air support to do so. 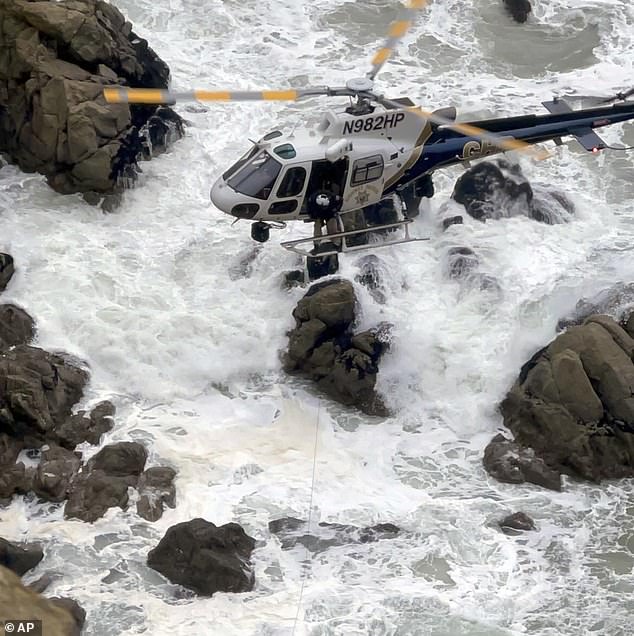 Dramatic videos posted online by CalFire showed choppers hovering over the water to pick up the adults and bring them to a landing area where first responders were waiting for them.

The helicopter pilots were careful to maintain a safe distance from each other and the rocky cliffside as they dug through the wreckage to rescue the parents.

Once they were freed, the entire family was promptly transported to Stanford Medical Center.

‘We came out here, unfortunately for things like this,’ Brian Pottenger, a battalion chief with Coastside Fire Protection District said in a statement. ‘And it was nothing short of a miracle that they survived.’