A fashion influencer with a designer wardrobe worth £100,000 has told how she quit her high-flying job to showcase her garb on Instagram and encourage women to ‘stand out, be bold and wear colour’.

Mamissa Mboob, 43, who lives in Geneva, has nearly 400 pairs of heels and says getting dressed up daily during lockdown and putting on make-up every morning helped her cope.

She previusly worked for the UN and as the former head of the trade division of the Ministry of Trade in The Gambia, helping women and girls to get an education.

However the former humanitarian worker, who gave up her profession to become an Instagram star, insists the eye-watering value of her wardrobe doesn’t make her a diva.

A fashion influencer, who boasts a £100,000 designer wardrobe, quit her high-flying job to showcase her garb on Instagram and encourages women to be bold and wear colour 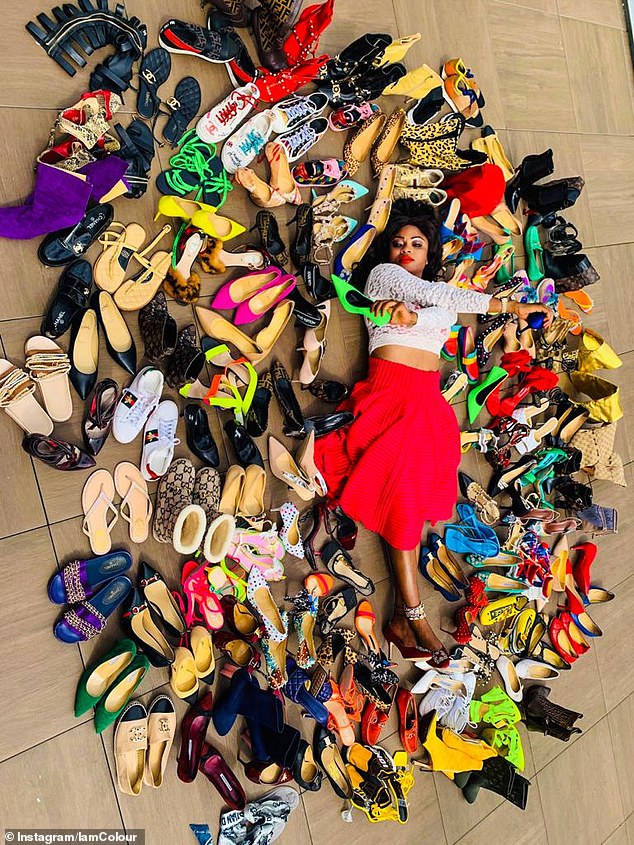 Mamissa said: ‘I have 300 to 400 pairs of shoes. I am a self-confessed footwear addict and I have worn my heels in lockdown at home and wear make-up at home as soon as I get up!

‘I did this because I believe lockdown should not be a reason to let go of yourself and be miserable.’

She boasts an impressive collection, adding she has more than ’60 designer handbags’ from luxury brands like Hermes and Chanel – along with a few High Street names including H&M.

Mamissa added: ‘My shoes and boots range from top designers like Fendi and Gucci to mid level brands like Paris Texas to high street brands like Zara. 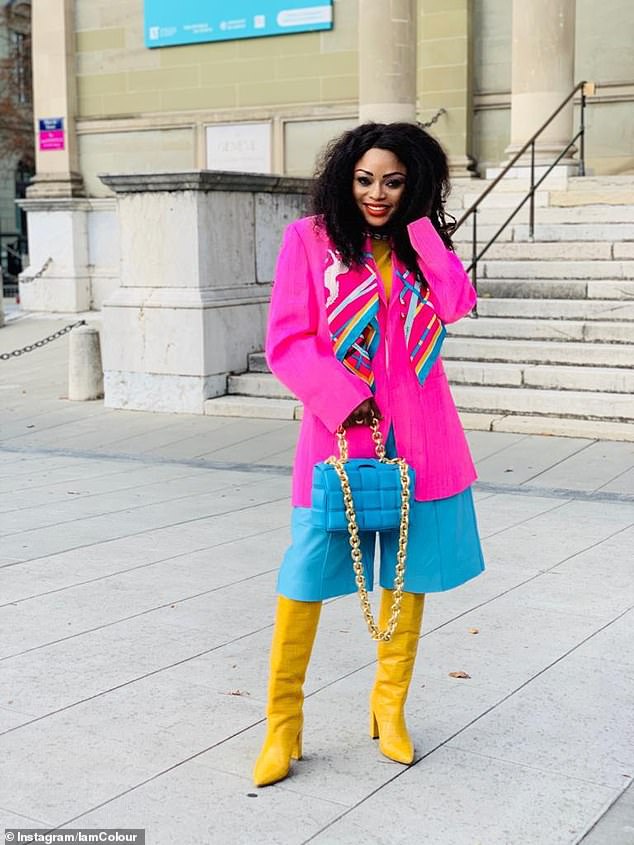 Mamissa Mboob, 43, who lives in Geneva, has nearly 400 pairs of heels, and says getting dressed up daily during lockdown, and putting on make-up every morning, helped her cope 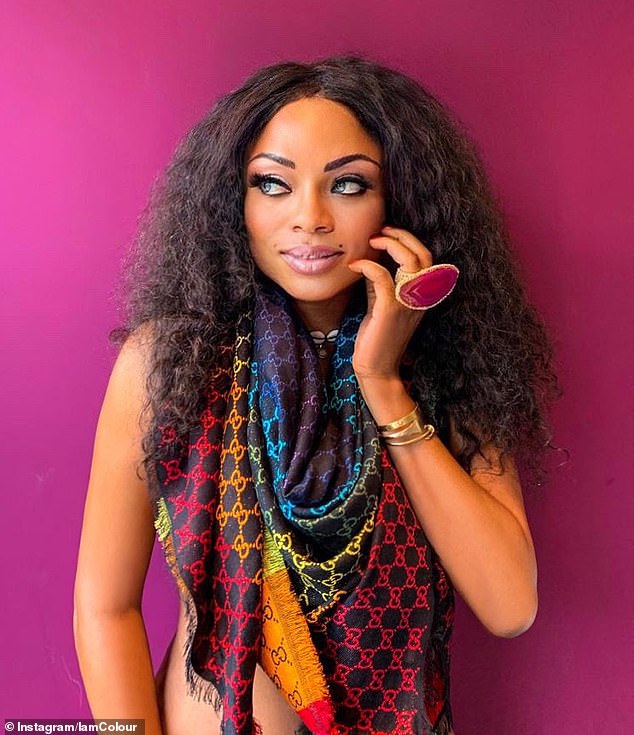 ‘I just love shoes as they make me feel feminine and alive! My firm belief is that you don’t have to wear expensive brands to look and feel fabulous – shoes and handbags from high streets brands like Zara can also make you feel just as amazing.’

Mamissa created her Instagram account at the beginning of lockdown and in just over a year she has attracted more than 120,000 followers.

She is now the most liked fashion influencer from The Gambia – and says she’s the biggest African influencer in Switzerland.

But this is a stark difference to her former career – where Mamissa believes she was encouraged to dress down and be submissive.

‘I encourage my followers not to be afraid to wear colourful shoes – green, red, purple,’ she said. 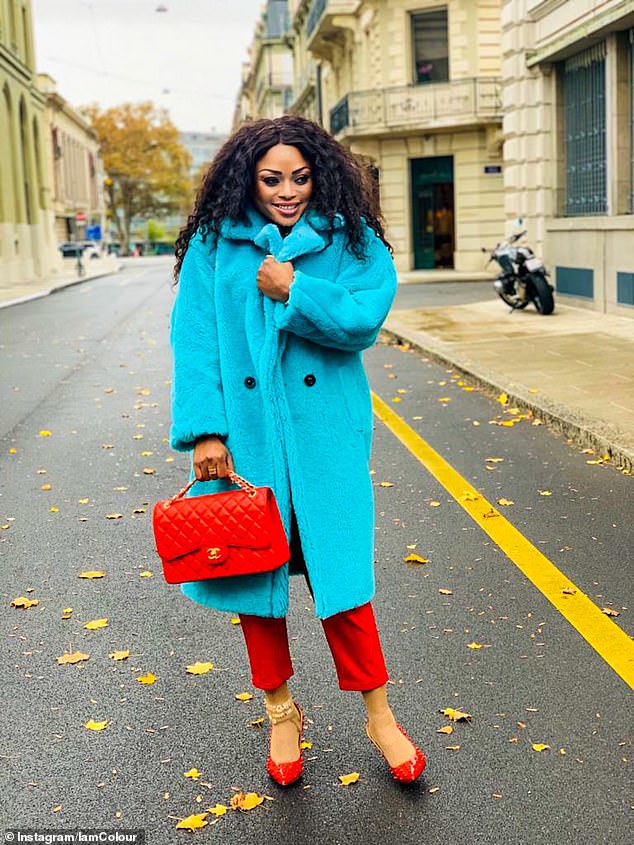 ‘I try to avoid just wearing black or brown boots. I own boots in all colours possible from pink to electric blue, purple, green, yellow and red.

‘My favourite pair of boots are my thigh high purple Balenciaga boots and my followers always talk about how only I can get away with wearing purple thigh high boots in Geneva.’

The mother-of-two bought herself her first Birkin bag – a ‘push’ present – after giving birth to her first daughter, which she said is her most prized possession.

She said: ‘My most expensive item is my Birkin bag. When my daughter was born, it was a difficult and scary pregnancy but she was healthy and well and I bought myself my first orange Hermes Birkin. 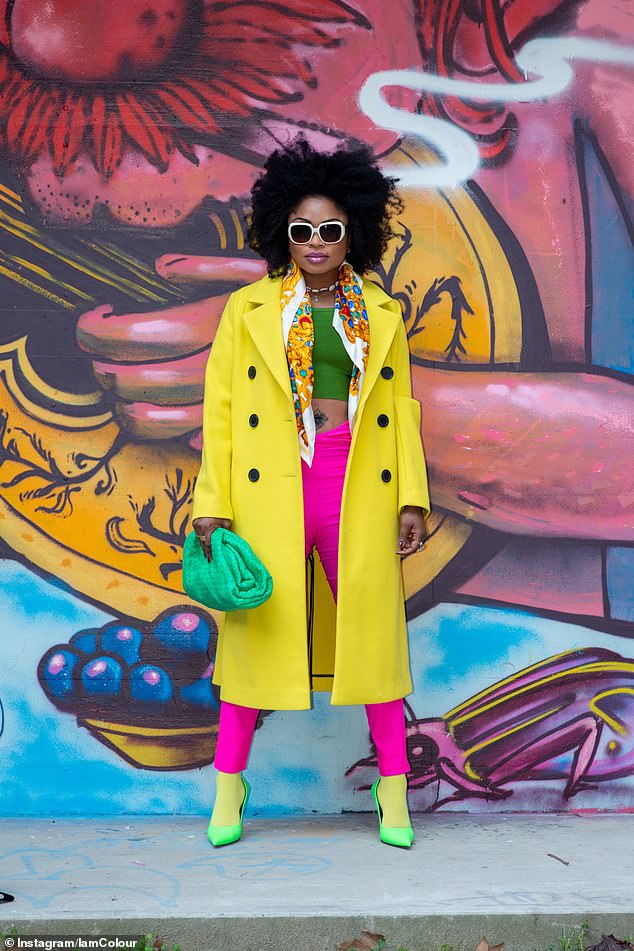 At the beginning of lockdown, she created her Instagram account to showcase her out there dress sense and in just more than one year she has more than 120,000 followers

‘When she’s 18, I want to give it to her as a reminder of success. I have bought other colours since then but this one remains my favourite because it meant a lot.

‘But despite this, I stay grounded and real. I connect with my audience, I respond to every single message and I answer all comments. I actually care about my followers.’

Mamissa hasn’t always been a successful fashion influencer; she originally studied for a masters in the US and received a scholarship to do a PhD in Cambridge. 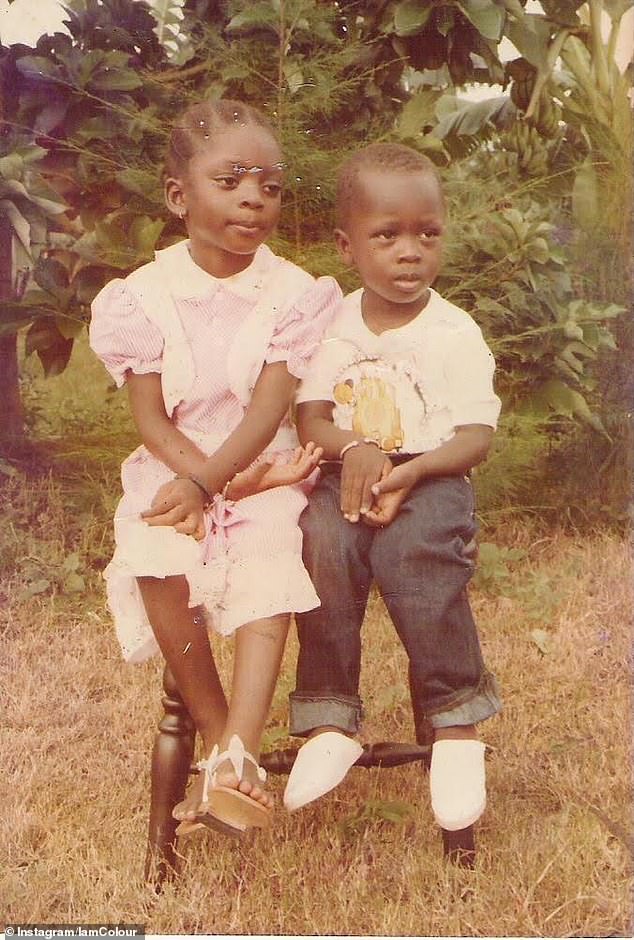 Mamissa, who is from The Gambia, originally studied for a masters in the US and received a scholarship to do a PHd in Cambridge (pictured left in a childhood snap)

Most recently, she was working with Unicef to help children in poor countries, but said her ‘creative side remained stifled’.

‘I am not afraid to be bold, to wear colour. Come out of your shell and wear that orange jacket!’ she urged.

Mamissa said she wants to encourage women to ‘come out of their shell’ and wear bold colours, adding that in West Africa it is common to dress in eye-catching hues.

She added: ‘Don’t be afraid to be bold and stand out. In West Africa women wear a lot of big colours. Always remember your background, your strength, your beauty and your confidence. 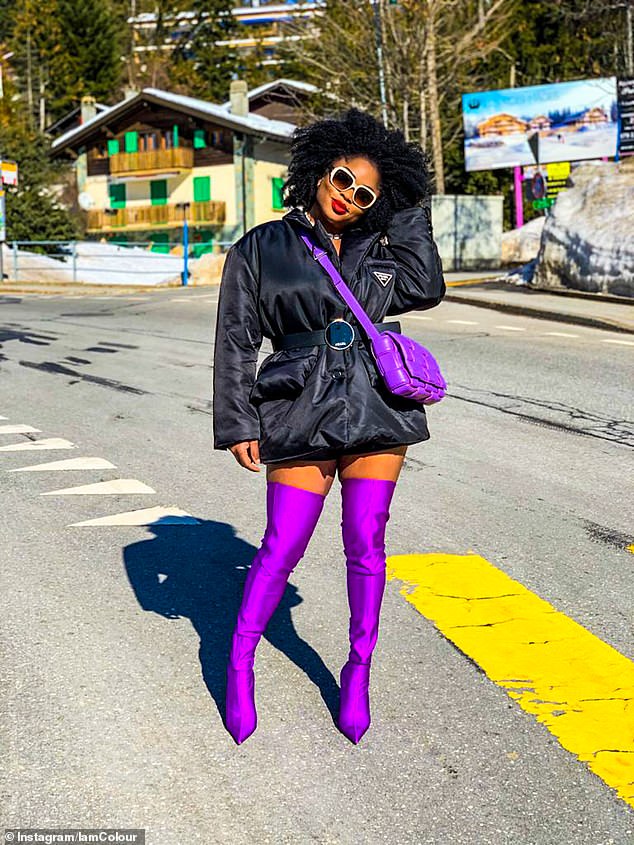 Throughout her career, Mamissa said she has felt she struggled to fit in ‘as a black woman in a white dominated environment’ and would ‘dress down’ so she didn’t stand out.

She said: ‘I always felt I had to work 10 times harder than the average. I had to be better and smarter, more eloquent, more submissive. I woke up about two years ago and decided enough is enough.

‘And so I decided to create TheColourMeMam in March 2020. A woman who is confident, strong, courageous, who is not afraid to stand out, not afraid to be bold, to be funny, to wear orange and red and yellow and blue! 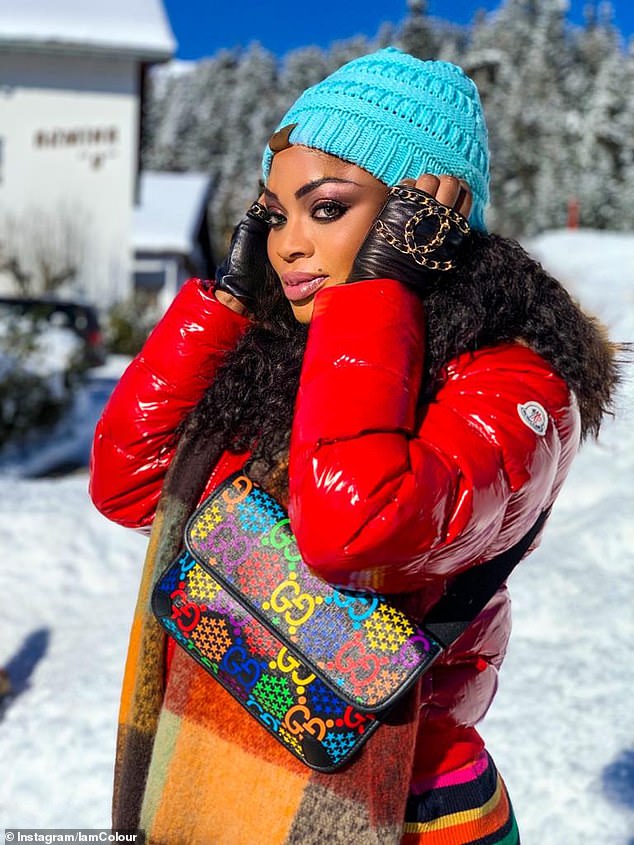 She wants to encourage woman to ‘come out of their shell’ and wear bold colours, adding that in West Africa it is common to dress in eye-catching hues

‘I decided that I would empower women to feel good about themselves, feel good to be a woman no matter your colour or age.’

Mamissa’s account now highlights her day-to-day life and enviable wardrobe but the key message is to ‘be bold’ and not be afraid to stand out.

The influencer says she is loved for her very colourful outfits – a mix of streetwear with touches of luxury.

She’s currently part of the Vauxhall Opel Mokka-e campaign and is sharing her own interpretation of being different with her followers. 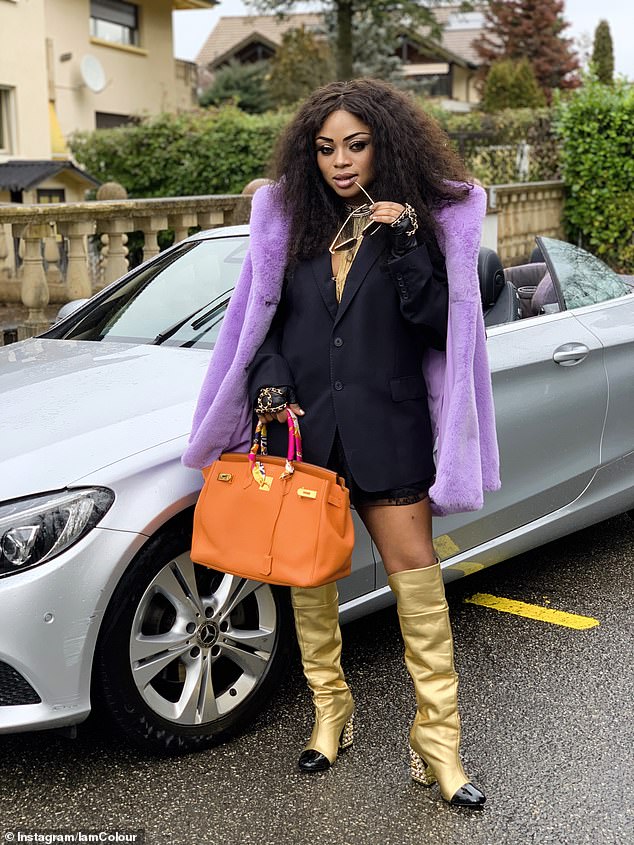 The mother-of-two bought herself her first orange Birkin bag ‘push’ present after giving birth to her first daughter, which she said is her most prized possession 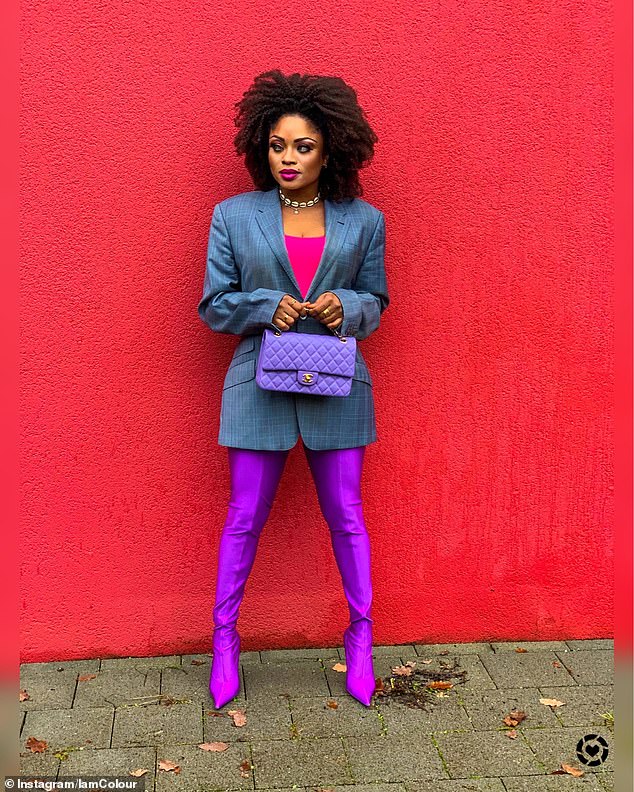 There are only four influencers chosen from Switzerland and she is the only one of colour – representing Geneva for the company.

She added: ‘In the end we are a master of our own destinations and my story shows how you can hit rock bottom and still get up and go higher.

‘I want to tell all women that no one can bring you down. No one can stand in your way, never give up, fight for injustice fearlessly and wear colour doing it!’