Fascinating (and hilarious) photos reveal what travel was like in the 70s and 80s, from costume parties to ‘what to pack’ lists that included ‘travel clocks, sewing kits and 2 coathangers’

It turns out that you don’t need smartphones, selfie-sticks or Instagram to have a great time on holiday.

As these fascinating and hilarious photographs from Contiki tours in the 1970s and 1980s show.

They were taken by Australians Maria Dzopalic (between 1984 and 1987) and Sue Bertram (in 1979) during various trips with the coach tour company through Europe, giving an insight into travel in the non-digital age.

One picture reveals a what-to-pack list that includes ‘travel clocks’, ‘sewing kits’, ‘two coathangers’, a ‘blazer for evenings only’ (for him) and a ‘not too formal’ dress for evenings out ‘for her’.

Maria said: ‘The social aspect of meeting people my age from different countries was fantastic. I am still in contact with a friend I met on the UK tour from Canada and I actually stayed with her when I went on a USA tour. She has since come to Australia. These days it’s birthday and Christmas cards and Facebook messages that keep us in touch though.’ Scroll down to take a refreshing step back in time…

Fun factor: Dress-up night with a Contiki group in Rome in 1979 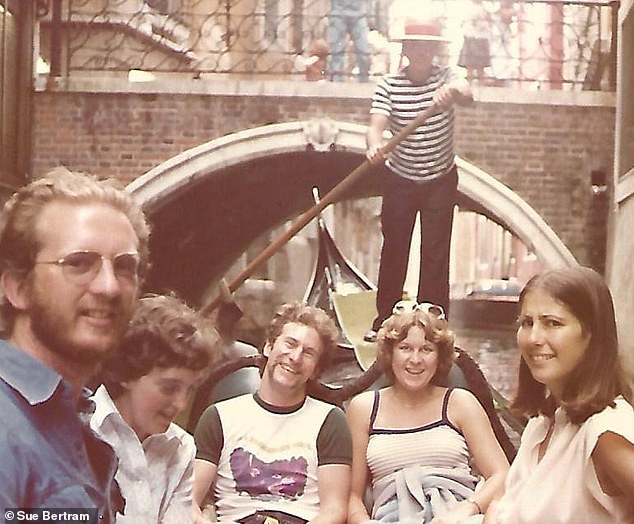 A Contiki contingent enjoy a gondola trip in Venice in 1979, though one holidaymaker (on the right) looks slightly sceptical 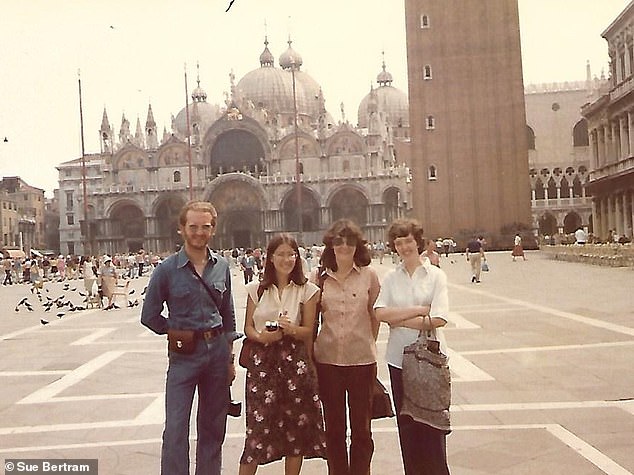 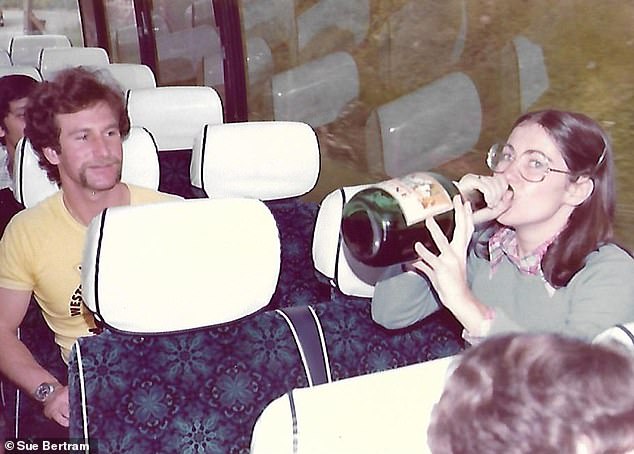 With entertainment via smartphones and tablets not yet available, this holidaymaker enjoys some liquid refreshment instead 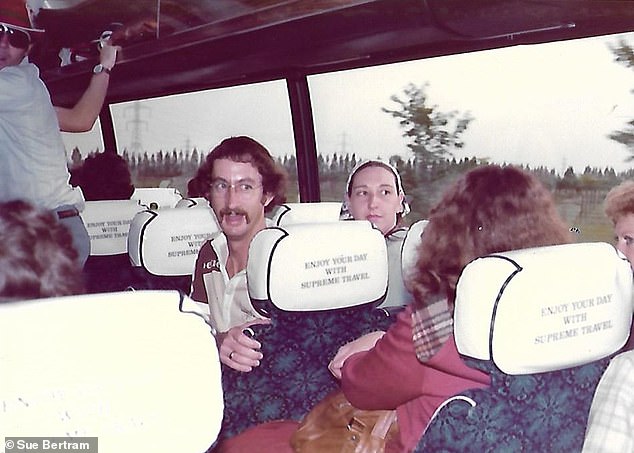 Epic moustaches were a common sight back in the day 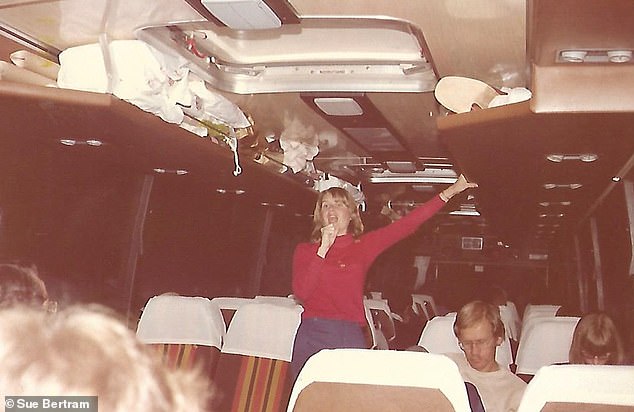 The non-digital age was a hot-bed of fun, as this photo almost shows 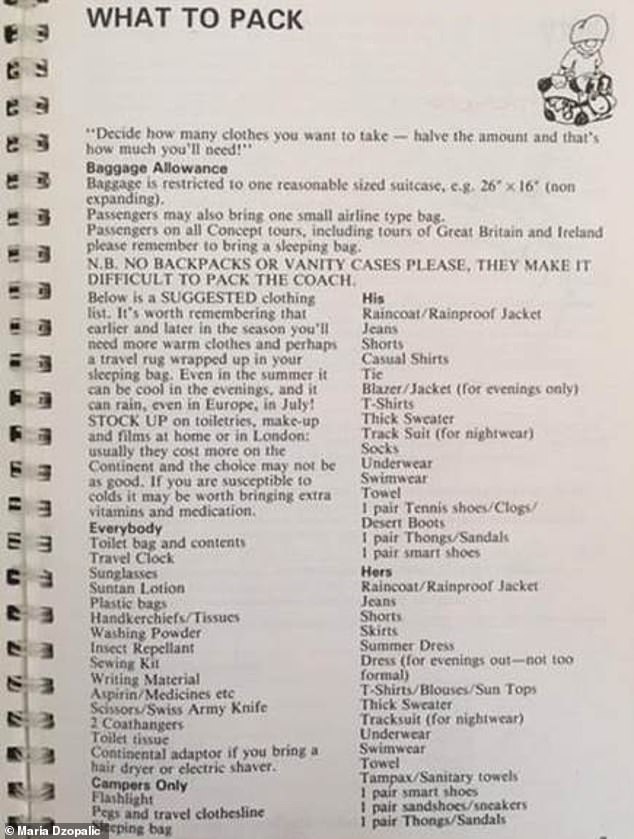 Essentials back in the day included two coathangers, a sewing kit and a travel clock. Blazers were for him, dresses (not too formal) were for her 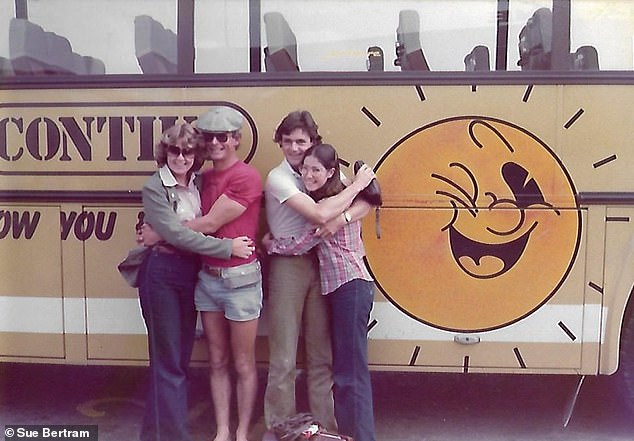 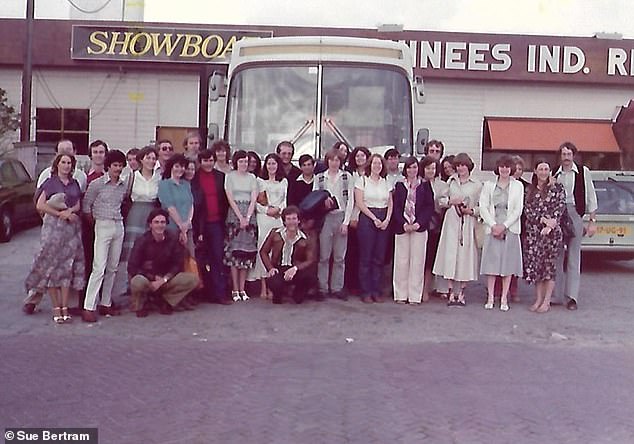 The all-important group photograph, with the women wearing their not-too-formal evening apparel 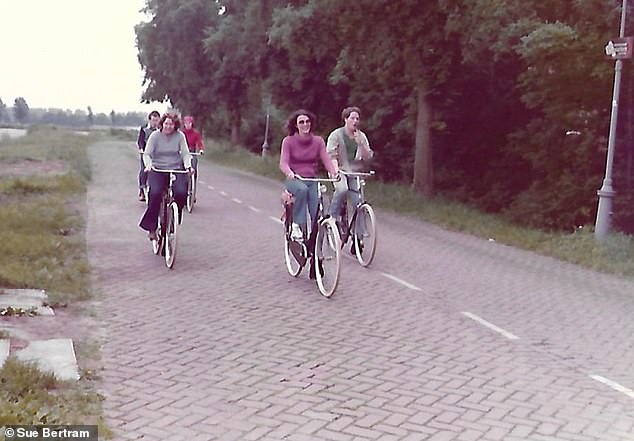 Where we’re going going, we don’t helmets: A cycling excursion in an unknown location 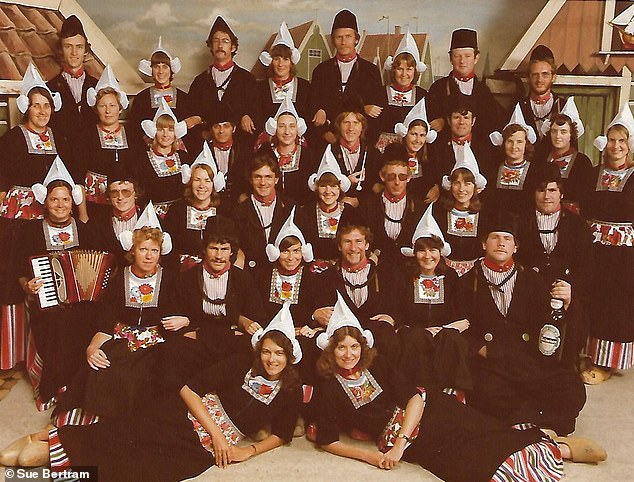 This photograph shows that back in the day, dedication to costume parties was unwavering 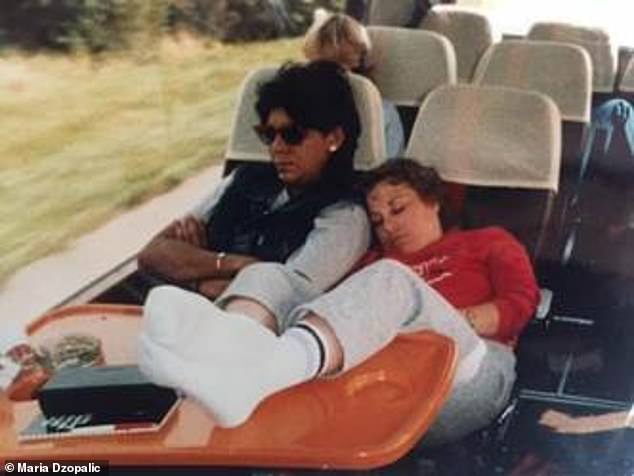 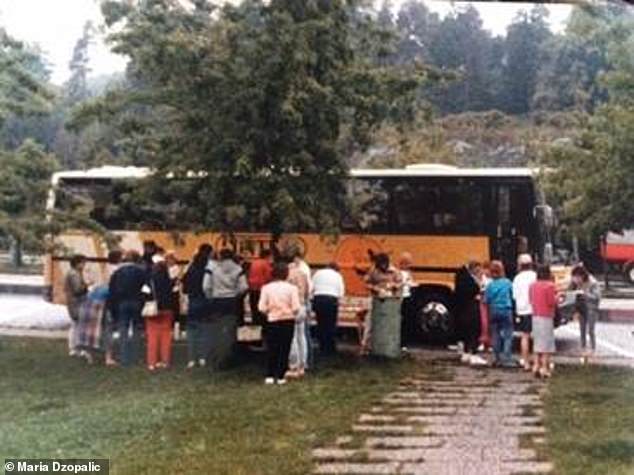 Maria said: ‘The social aspect of meeting people my age from different countries was fantastic. I am still in contact with a friend I met on the UK tour from Canada’ 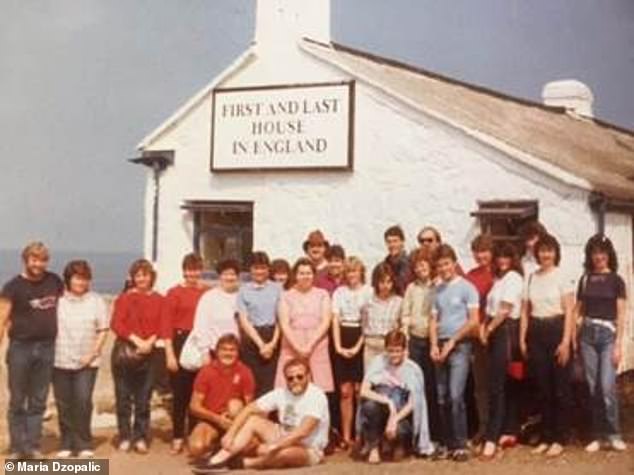 A group photo from the 14th day of a 28-day tour across England, Scotland and Wales. This was taken at Land’s End (Maria is right in the middle in the pink dress) 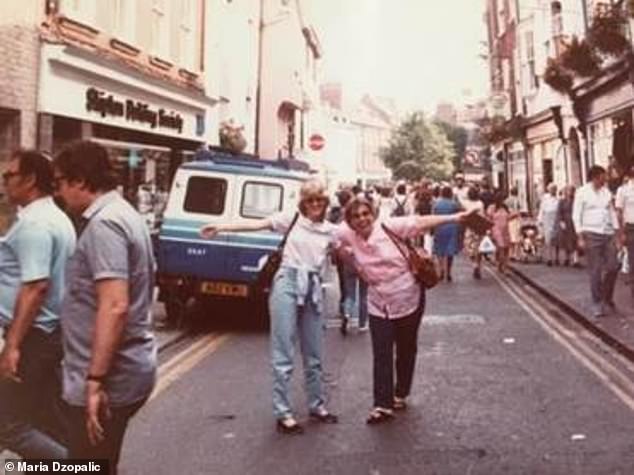 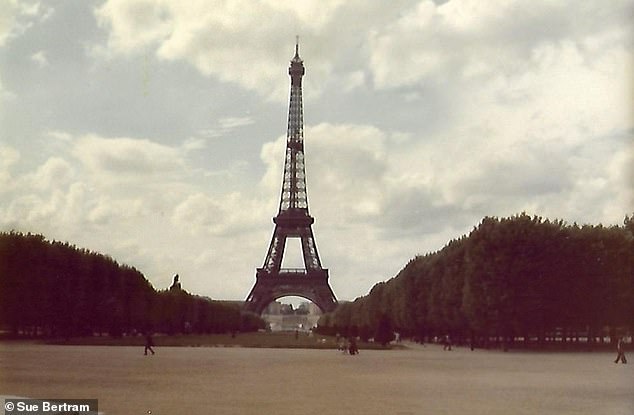 ‘Seeing the Eiffel Tower for the first time was something that made me stop and say “Wow!”‘ said Maria. Though this picture was taken by Sue Bertram 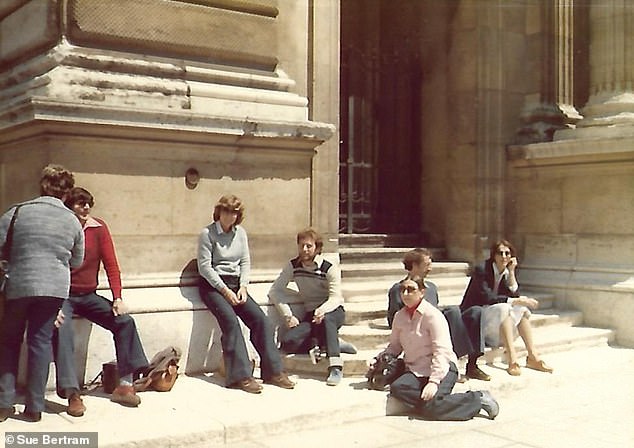 Note how because smartphones hadn’t been invented, resting holidaymakers in 1979 had to just look around to pass the time. This picture was taken in Paris 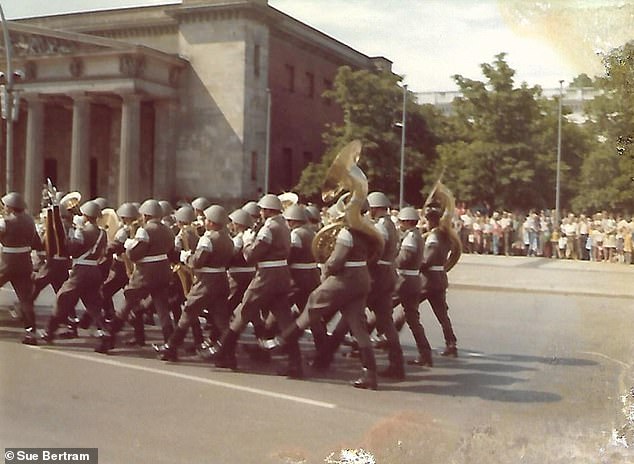 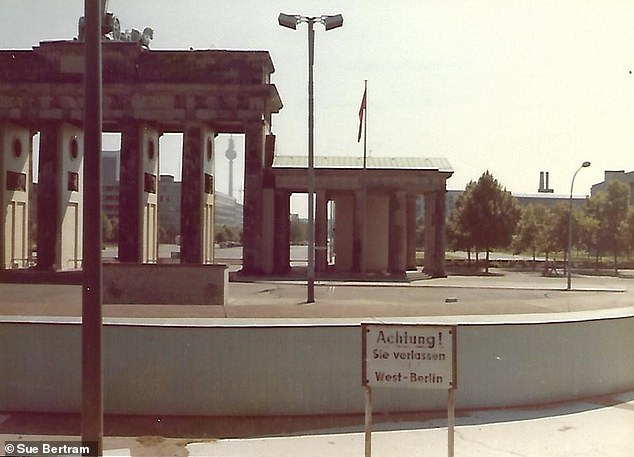 The Berlin Wall in front of Brandenburg Gate in 1979 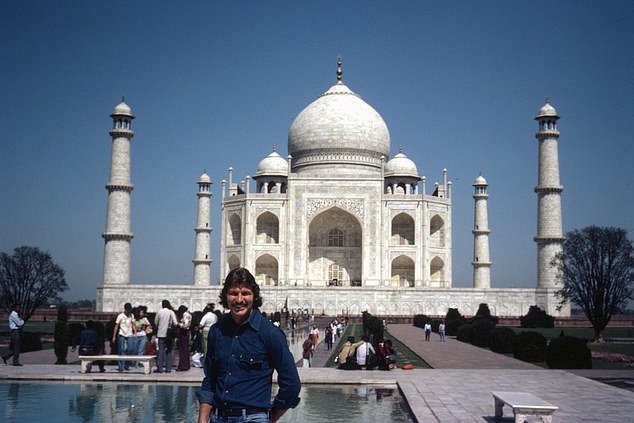 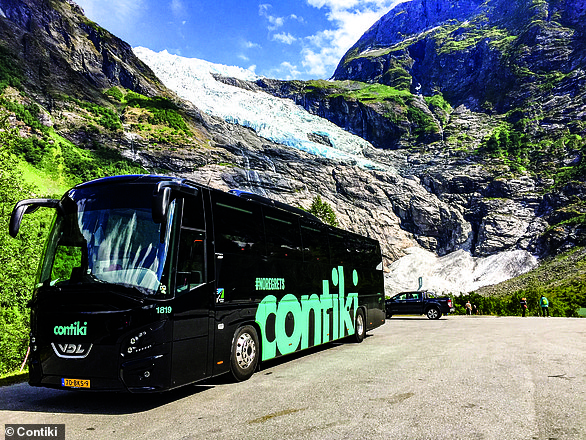 The firm says: ‘Contiki’s fleet of super-sleek coaches come with the benefit of air-conditioning, reclining seats, a bathroom, a club-rivalling sound system and TVs. They’re also Euro 6 coaches, the most environmentally friendly in Europe.

‘The engines use a product called Adblue to convert dangerous fumes into a mixture of water and nitrogen which are harmless for the environment – this means in some areas, air emitted from the engines of Contiki coaches is actually cleaner than the air that goes in.’ 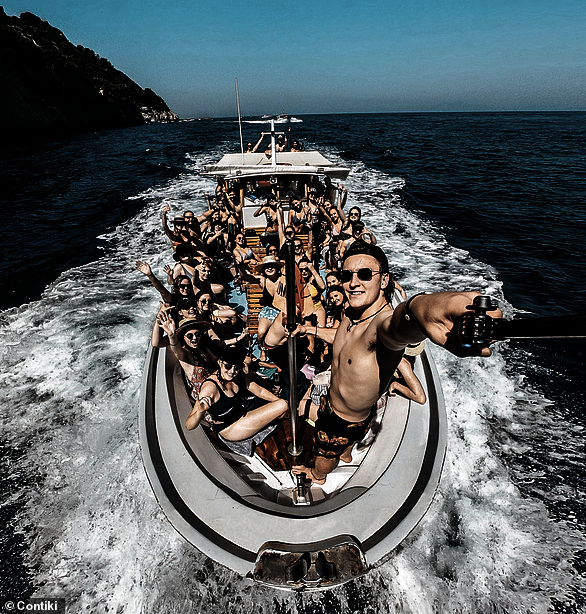 Contiki describes itself as ‘the world leaders in travel experiences for 18-35’s’.

The firm adds: ‘We bring together travellers from all corners of the globe to discover new cultures and a little part of themselves along the way.’