A prototype of the cutting-edge Tempest fighter jet will be in the skies over Britain within five years, it was announced at the Farnborough Airshow yesterday.

The multi-billion-pound project is expected to launch a supersonic piloted demonstrator by 2027 to test a range of the technologies being developed for this combat aircraft of the future.

Boris Johnson, who opened the show in Hampshire after a four-year hiatus due to the pandemic, said he was ‘obsessed’ by Tempest.

More than £2billion has been committed to the project so far by the Government and £800million from the companies involved.

The consortium is led by British defence giant BAE Systems and includes engine-maker Rolls-Royce and the UK arms of European firms Leonardo and missile-maker MBDA.

More than 580 UK suppliers, some of them smaller firms, also benefit from the investment.

Development of the demonstrator is already under way at BAE’s site near Preston, and with war in Ukraine pushing defence up the agenda, the Government is due to make a final decision on the project in three years.

The future combat air system (FCAS) programme already employs 2,500 people across Britain with an additional 1,300 expected to be taken on by the companies involved by the end of 2023.

If all goes to plan, the Tempest, which was formally announced at the last Farnborough Airshow in 2018, could eventually replace the Typhoon and F-35 at the heart of Britain’s defences.

This so-called ‘sixth generation’ fighter jet features a ‘wearable cockpit’. Instead of dials or switches, pilots will wear a virtual reality helmet, including interactive displays, with everything they need to know, from altitude and speed to the location of enemy aircraft, beamed onto their visor.

Its development is being streamlined by the use of digital technology, which means more than 100 hours have already been test flown virtually on the demonstrator, producing results that are fed back into the manufacturing process.

The Tempest jet is being billed by the Government as the first time the UK will have developed a fast aircraft using 21st century technology. 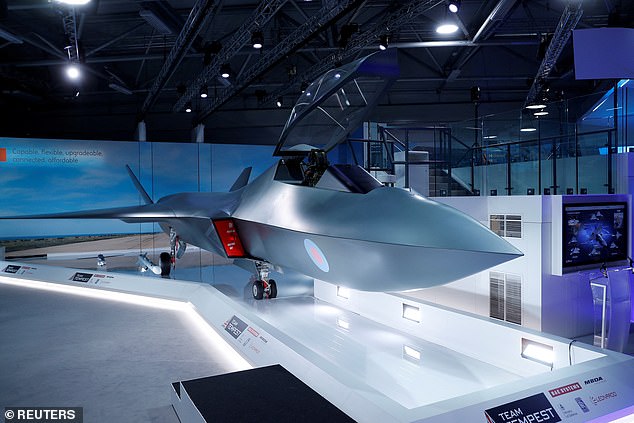 Herman Claesen, BAE’s managing director for the project, said: ‘We are really putting ourselves on the map here.’

Claesen brushed off the idea that a change of prime minister might create uncertainty as the Tory contest to replace Johnson at No 10 continued.

But he added: ‘Of course, we want political stability – the whole nation – especially from an industry point of view.

‘The nation will prosper when we have a stable government. I’m sure we will get there.’

Claesen highlighted the need for the programme in a world that ‘is not becoming a safer place’, adding that it was ‘important we have a military capability in this country that can stand up to threats and protect the free world’.

The programme is also launching a recruitment and skills initiative known as Generation Tempest intended to create thousands of job opportunities across the UK.

Britain is also working with allies Sweden, Japan and Italy on potential collaboration on fighter jet programmes. There has been speculation about a relationship with a separate Franco-German programme.

Richard Berthon, the Ministry of Defence’s UK director for the FCAS programme, when asked about a collaboration with the Franco-German project, said that Britain was ‘open to conversations as time goes by’.