The broadcaster, 70, who became a regular host for the programme in 1987 and is the longest serving host in the BBC Radio 4 show’s 74 year history, announced her plans to step back from the show in July.

Dame Jenni opened the programme this morning by saying it was ‘very strange’ to be hosting her final Woman’s Hour, before one of her guests, MP Harriet Harman, praised her ‘tremendous legacy.’

Many listeners were left crying over Dame Jenni’s goodbye to the show, with one commenting: ‘Just listened to Jenni Murray’s farewell Woman’s Hour – played out by Helen Reddy ‘I am Woman’. Feeling tearful, but uplifted.’

Dame Jenni Murray, 70, left listeners in tears as she presented her final episode of Woman’s Hour today (pictured today, while hosting the programme)

‘She’s been with me growing as an adult, mother, partner, journalist and career woman.’

‘And yes, it does feel very strange to be saying that for the last time after 33 years!’ 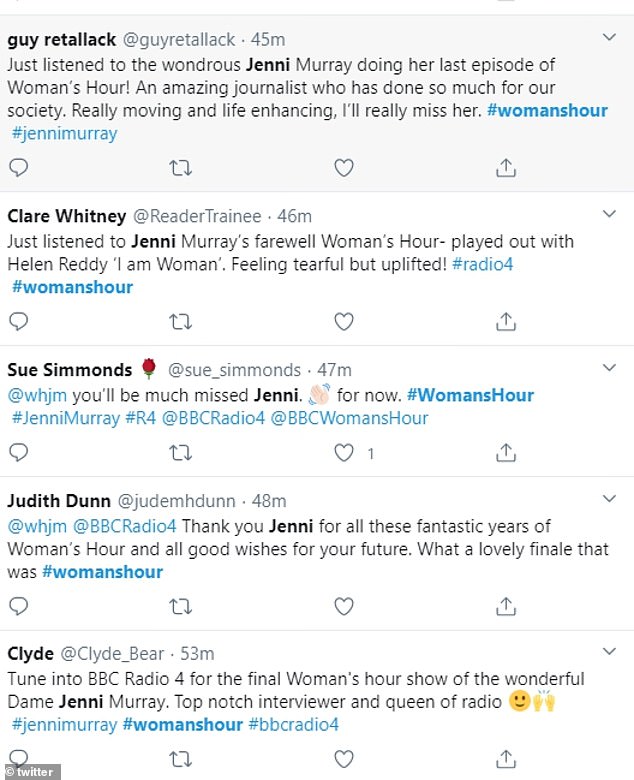 Listeners of the programme said they were left weeping after Jenni’s final programme, and flooded Twitter with praise for the long-standing host

Her final episode celebrated the legacy of the programme and looked back at some of her most memorable interviews.

The presenter spoke of some of her favourite moments from the programme over the years.

She added she felt ‘much cheered’ after receiving the gift of a farewell chocolate cake from celebrity chef Mary Berry, saying: ‘It’s sitting in front of me, waiting to be shared with the team and we will wait for the end of the programme.’

Guests, including MP Harriet Harman, praised the programme and Dami Jenni’s legacy, with Harriet saying: ‘You mentioned at the start of this that we’re all the same generation. 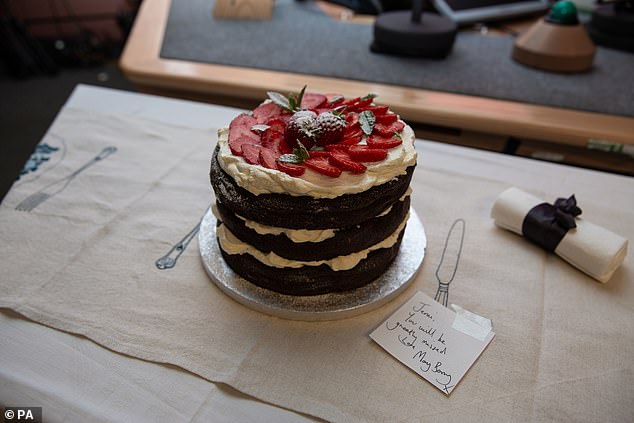 ‘The thing about our generation is we were the first generation who are not saying “we are going to choose between staying at home and being a housewife and prioritising a career” but we would try and do both.

‘That was an incredible social and economic revolution that was invisible to most of the broadcasting world.

‘But Woman’s Hour, with you right at the heart of it, you made the space for all of these issues to be discussed, day in and day out. We all could hear each other and talk to each other.’

Harriet continued: ‘If we hadn’t had that space, we wouldn’t have been able to find our way forward in the way we have. 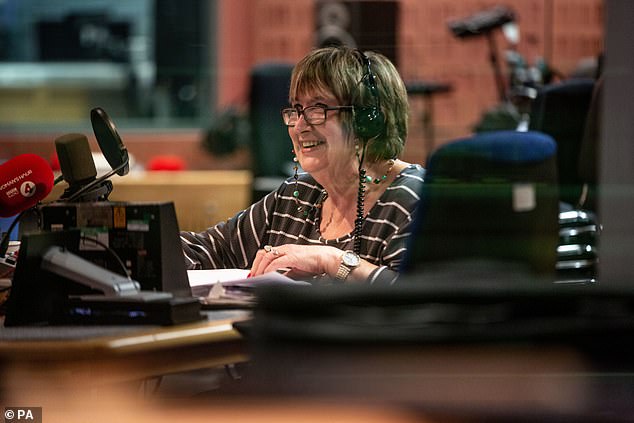 The presenter, who is the longest standing presenter of the programme, was praised by guests for her ‘tremendous legacy’

‘You leave a tremendous legacy and I just want to thank you for that.’

She added: ‘I just cannot give you enough respect, so thankyou.’

Meanwhile novelist and poet Jackie Kay saluted her for ‘holding up a mirror to the real world and everything that’s been going on in it.’

She asked Dame Jenni how it felt to be presenting her final show.

Dame Jenni replied: ‘I’m sitting on a chair – because I like a solid chair, not a chair that wiggles around – and it’s green and it’s been here for years. 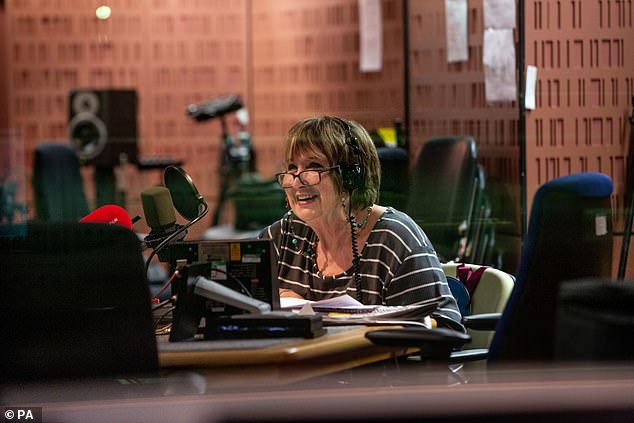 At the close of the show, Dame Jenni bid farewell to listeners before playing Helen Reddy’s I Am Woman, Hear me Roar

‘The studio managers have put a blue plaque on it: ‘Jenni Murray last sat on this chair on the 1st of October 2020′ But it is just very, very strange.’

At the close of the show, Dame Jenni bid farewell to listeners, saying: ‘If you do a programme like Woman’s Hour, you have to consistently remind yourself that woman are a vast range.

Who is Dame Jenni Murray?

Dame Jennifer Susan Murray was born in Barnsley on 12 May 1950.

She attended Barnsley Girls High School, leaving with A levels in French, English and History.

She has a degree in French and Drama from the University of Hull.

She was a newsreader and later one of the presenters of the BBC’s Newsnight television programme for two years from 1983, before moving to Radio 4 to present the Today programme.

She took over from Sue MacGregor as presenter of Woman’s Hour in 1987.

She has also presented Radio 4’s The Message and written for magazines and newspapers including The Guardian, Daily Express and the Daily Mail.

She married her first husband Brian Murray when she was 21 years old.

She later married David Forgham. She has two sons, Ed and Charlie.

‘There are many stereotypes that fit our gender. but our sex we share.’

She thanked the three men in her family, ‘David, Ed and Charlie’ for ‘giving endless support.

Meanwhile the presenter closed the show by playing Helen Reddy’s I Am Woman, Hear me Roar.

Many of those listening at home said the programme had left them in floods of tears, with one saying: ‘The mighty Jenni Murray’s last ever edition of Woman’s Hour just starting of Radio 4. End of an era innit. Tune in.’

‘Not a regular listener however today is a gathering of icons,’ one added, ‘Farewell and thanks Jenni Murray.’

‘An amazing journalist who has done so much for our society. Really moving and life enhancing, I’ll really miss her.’

Dame Jenni became the regular presenter of Woman’s Hour in 1987 and was made a dame in 2011 in recognition of her contribution to broadcasting.

Born in Barnsley, Dame Jenni joined BBC Radio Bristol in 1973 and went on to report and present for BBC TV’s South Today.

In 1983, she joined Newsnight before moving to Radio 4 as a presenter for the Today programme.

The new presenter is known for her headline-making interviews and broadcasting firsts and recently hosted the Duchess of Cornwall’s first guest edit, live from Clarence House.

Jane Garvey, who also presents on Woman’s Hour, is also quitting the programme and will leave the show at the end of the year.