Fans involved in the wild brawl in the crowd at Magic Round held at Suncorp Stadium on Friday are facing long-term bans with the NRL to carry out its own investigation independent of police.

Brisbane’s 38-0 thrashing of Manly was marred by a brawl midway through the first half that resulted in multiple punches, a coward punch, and one spectator going tumbling backwards down three rows of seats.

Ten individuals were issued move along directives by Queensland Police and one man was issued a public nuisance infringement with investigations to continue.

‘Police are working to identify those involved, however, no formal assault complaint has been received at this time,’ Queensland Police told Channel Seven.

NRL boss Andrew Abdo was left fuming over the incident, the second brawl to occur at Suncorp Stadium in the space of a month. He said any fans identified could expect lengthy bans from attending NRL matches.

‘There’s absolutely no place for violence at our games,’ he told News Corp.

‘Aside from the action the authorities may take, we will also ban any fan who engages in violence in the grandstands. It will not be tolerated.

‘Magic Round is a celebration of our game, our fans and families. Almost 150,000 fans will attend this weekend and we will speak with the Stadium, who oversees security, to ensure the right measures are in place.’ 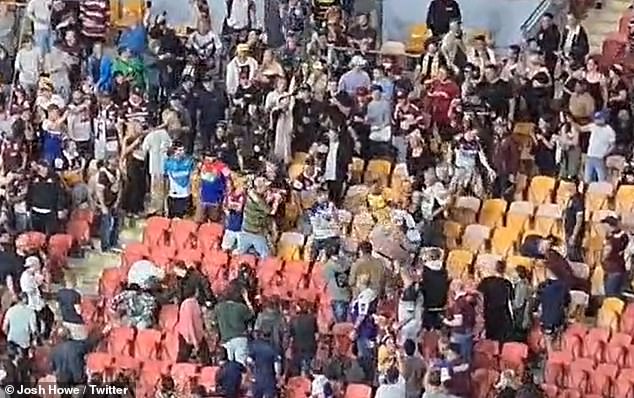 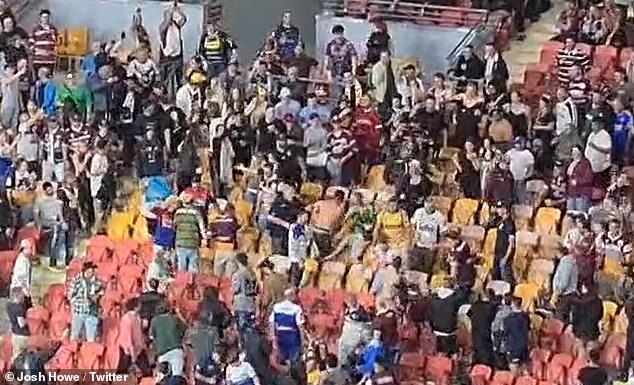 Queensland Police Minister Mark Ryan said he wanted to see the individuals involved in the brawl banned from footy games for life.

‘There’s a couple of idiots out there who have done the wrong thing and they’ll be dealt with,’ he said.

‘I hope they are banned for life from the stadium.

‘This was a couple of yahoos who were engaging in disgraceful behaviour. They will be dealt with by authorities.’

Previously, a huge fight in the stands has marred the opening night of Magic Round as fan trouble continued to plague the NRL.

With Suncorp Stadium hosting all eight games this weekend, fans from all 16 clubs will descend upon the Brisbane arena as fixtures are played back-to-back.

On Friday, fans of Manly, Brisbane Broncos, Newcastle and Canterbury were in attendance in the opening night of the round, but scenes were far from cordial as supporters were seen throwing fists at one another in a wild altercation.

Shocked onlookers note that no police were in the vicinity of the brawl, although News Corp reports that officers intervened in the scuffles that lasted around one minute.

Footage of the incident was swiftly shared on social media, with one user posting: ‘You know what else is magic? Biff’.

A different clip from a closer angle shows a male wearing a white t-shirt being thrown a number of rows down while another supporter punches a defenceless spectator from behind in ugly scenes. A man can be heard asking: ‘Where is the security?’

‘Another disgraceful act of violence at Suncorp Stadium,’ one fan tweeted. ‘Totally unacceptable. Hope this doesn’t sour what should be an amazing #magicround but this is happening far too often recently and needs to stop’. 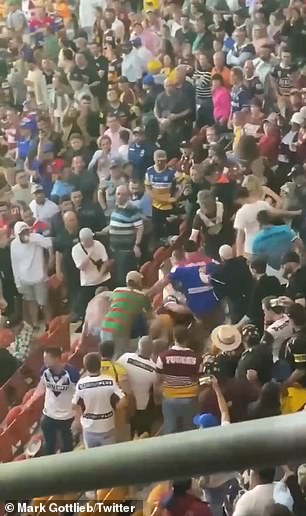 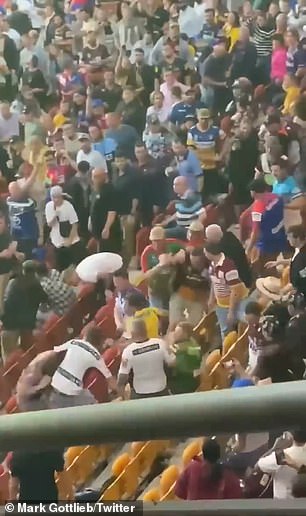 ‘I would have thought extra security would have been essential during #magicround given so many different supporter bases are there,’ another supporter wrote.

A Queensland Police spokesperson told news.com.au that three people involved in the brawl were evicted by police and have been handed penalty infringement notices for disorderly conduct on a licensed premises.

However, there are no active assault complaints. Queensland Police added that another three men were given a move on direction, while one person required first aid treatment.

The ill-behaviour of supporters is becoming a consistent theme in the NRL this season.

A Broncos fan was knocked unconscious by a Bulldogs supporter moments after the minute silence in Anzac Day round, after allegedly yelling during the sombre occasion.

A number of supporters have also disrupted games by invading the pitch, with one Gold Coast woman dumped by her boyfriend after entering the field of play during the Titans’ game against the Panthers.