‘Even FRED is laughing at you’: Fans ruthlessly mock Cristiano Ronaldo as his warm-up tricks fail to come off… much to the disbelief of his Manchester United team-mate

Fred couldn’t help but laugh as Cristiano Ronaldo messed up an attempted piece of skill during Manchester United’s warm-up on Sunday afternoon.

The Portugal international was seen warming-up alongside Fred and new signing Casemiro when he tried to show-off by backheeling the ball over his own head.

Ronaldo failed to execute the skill twice before Fred jokingly threw his head into his hands out of embarrassment for the 37-year-old forward.

The incident took place before Manchester United’s 3-1 win over Arsenal at Old Trafford on Sunday afternoon.

Ronaldo – who started the game on the bench – was seen knocking the ball around with Fred and new signing Casemiro during the warm-up.

The Portugal international was eager to prove his worth and decided to showboat in front of the Old Trafford faithful.

However, things did not go according to plan. Fred headed the ball to Ronaldo. He attempted to backheel it over his own head to Casemiro.

The 37-year-old forward miscalculated the trajectory of his backheel and played it straight into his own body.

Ronaldo was mortified by the faux pas and instantly tried to rectify the situation… but he just made things worse.

The wantaway striker flicked the ball up into the air and attempted the same piece of skill again… hoping for a different outcome.

However, the ball rebounded off his body for a second time. Fred couldn’t help but laugh at the situation and threw his head into his hands.

Fans were quick to mock Ronaldo on social media for the incident. One wrote: ‘Bruh….Even FRED is laughing at you’.

Another added: ‘He thought he could lure Casemiro and Fred into thinking he’s better than their Brazilian Real Ronaldo’.

One fan wrote: ‘Blud thinks he’s a Neymar’, while another supporter called him: ‘Finishnaldo’.

Several fans even hinted at a transfer to the American top-flight – saying: ‘The MLS is about to get Ronaldo REAL SOON.’

Meanwhile, some fans felt sorry for Ronaldo. One wrote: ‘As days go by, this man’s reputation is taking hits upon hits. Hate to see it!’. 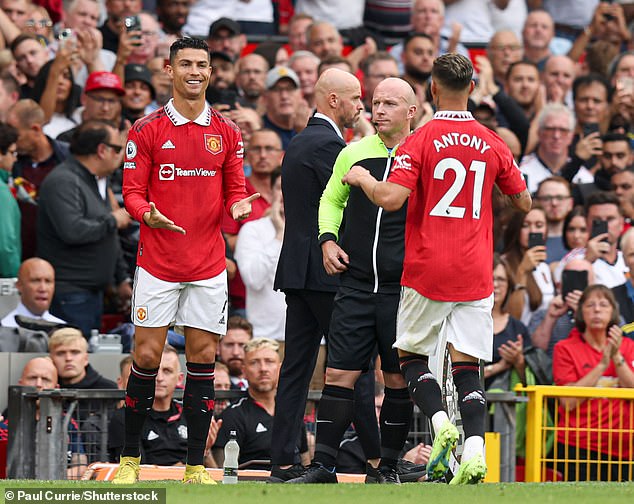 The Red Devils were 1-0 up when Ronaldo was introduced in the 58th minute of the game. He came off the bench to replace goal-scorer Antony.

United went on to score two more goals but neither came from Ronaldo. Instead, it was Rashford who bagged a brace in the second half.