‘He’d be spoken about in the same breath as Messi and Ronaldo’: Fans pay glowing tributes to former Tottenham and England legend Jimmy Greaves after his death at the age of 81

Spurs announced that their all-time record goalscorer and one of their greatest players in the club’s history passed away in the early hours of Sunday morning at the age of 81.

As a result, fans have paid their condolences to his family via social media and recalled some of their fondest memories – with many calling him ‘part of the fabric of football’. 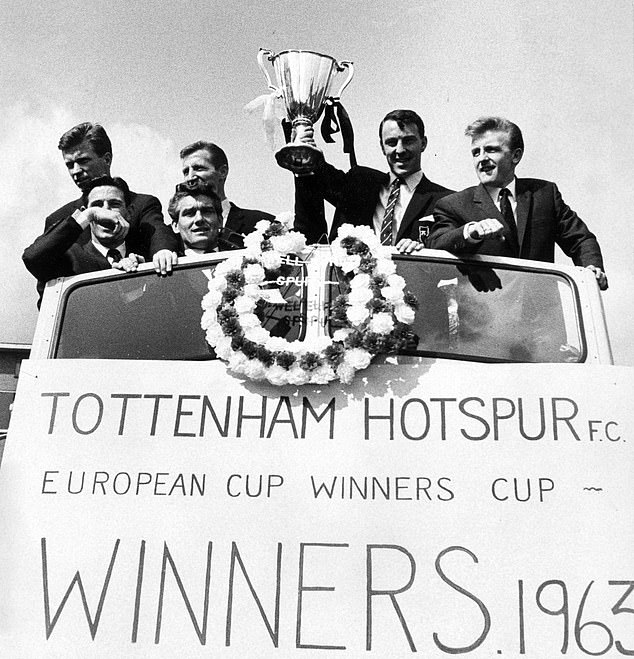 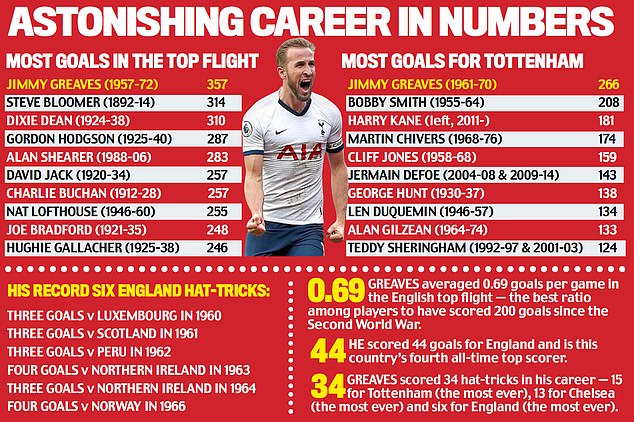 Greaves had been suffering from poor health since a stroke in 2015 and passed away in the early hours of Sunday morning.

The football world have since gone into mourning as ‘Greavsie’ was the greatest goalscorer of his generation – scoring 447 goals across his club career including an unrivalled 220 for Tottenham, 132 strikes for fellow London club Chelsea and 44 goals in 57 games for England.

During his career at Tottenham, Greaves also won the FA Cup twice and helped Spurs to the European Cup Winners’ Cup in the 1962-63 season. His contributions to football also earned him an MBE in December of last year.

As a result, fans have said that Greaves would have ‘been spoken about in the same breath as Messi and Ronaldo if he was still playing today’. 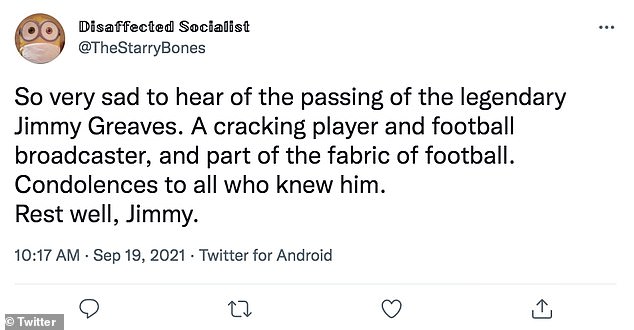 Others took to Twitter to say: ‘So very sad to hear of the passing of the legendary Jimmy Greaves. A cracking player and football broadcaster, and part of the fabric of football. Condolences to all who knew him. Rest well, Jimmy.’

Another added: ‘Today is a very sad day, we have lost a Tottenham Legend up their with the very best goal scorers that England have ever produced. RIP Jimmy Greaves #Legend.’

One fan wrote: ‘Though #Tottenham were never my team, #JimmyGreaves was my first football hero. An extraordinary player and clinical goal scorer. Robbed of a World Cup final place by injury and Sir Alf. But he made us gasp and laugh in equal measure.’

While another added: ‘Whenever the ball goes anywhere near the penalty box, my dad whispers ‘Jimmy would’ve buried that…’ I’m too young to remember him playing, but I know the absolute joy he brought to my dads generation. A Spurs legend.’

Some even said: ‘If he was playing today he would be spoken about in the same breath as Messi, Ronaldo, Lewandowski. A true legend. RIP Jimmy. #jimmygreaves.’

One fan admitted to shedding several tears after hearing the news. He wrote: Just read that Jimmy Greaves has died aged 81. Must admit to a few tears as he was my first ever Hero and his goalscoring was phenomenal – loved the man. His struggles after football made us all feel even closer to him and who can forget ‘Saint and Greavsie’ what a show. RIP Jim.’

Several other fans went on to speak about the Saint and Greavsie show in which he starred alongside Ian St John.

Greaves – who coined the catchphrase ‘It’s a funny old game’ – was praised for securing everyone’s love of football and acting as a ‘real gent’ on set.

One fan said: ‘Jimmy Greaves. Spurs greatest scorer. But much more than that. I was brought up watching Saint & Greavsie and it’s one of the things that secured my love of football. Condolences go out to his family and friends.’

While another added: ‘When I first moved to London, I worked as a porter at TV-AM. As we couldn’t start until the broadcast was over, we hung about the canteen. Most days, Jimmy Greaves was there and instead of hanging with the ‘stars’, he preferred to sit and talk with us. RIP Jimmy. A real gent.’

Another supporter wrote: ‘Sad to hear that Jimmy Greaves has passed away just months after his friend and colleague Ian St John. Used to love watching Saint and Greavsie as a kid. I’m sure they’ll be looking down and discussing the day’s matches. ‘It’s a funny old game’ RIP.’