EXPRESS INFORMER > Sports > Fans chant ‘buy the team’ at Ryan Reynolds as he watches the Ottawa Senators – in a Wrexham cap!

Senators fans chant ‘buy the team’ at Ryan Reynolds as he turns up to watch Ottawa – in a Wrexham cap! – after telling Jimmy Fallon he DOES want to take over the franchise… and gets trolled by Vancouver Canucks after they win 6-4!

Vancouver-born actor Ryan Reynolds is looking into purchasing another professional sports team – turning away from the football pitch and onto a sheet of ice.

His hometown Vancouver Canucks took on the Ottawa Senators on Tuesday night – after Reynolds publicly disclosed his desire to purchase the Senators.

The ‘Deadpool’ actor and Wrexham AFC owner appeared at the Canadian Tire Center in the Ottawa suburb of Kanata where he was met with cheers and appreciation from the crowd.

At one point, Reynolds was shown on screen. He stood up and waved to the crowd, with a few chants of ‘Buy the Team’ breaking out as players gave him a stick salute. 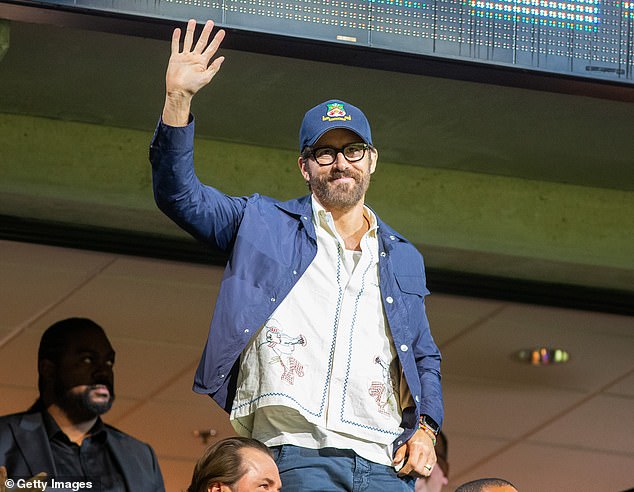 Reynolds appeared at a Senators game, waving to the crowd & showing his appreciation

Reynolds appeared on The Tonight Show with Jimmy Fallon and said he’s ‘trying to’ buy the team, just a few days after Senators Sports & Entertainment said they were open to hearing potential offers.

‘It’s very expensive, I need a partner with really deep pockets,’ Reynolds said on the show.

‘It’s called a consortium when you form a group together to buy an entity. It’s just a fancy way of saying I need a sugar mommy or a sugar daddy.’

The franchise is one of the cheapest in the league, currently valued at $655m.

SS&E is the parent company of the team, which was owned by Eugene Melnyk from 2003 until his death in March of this year. 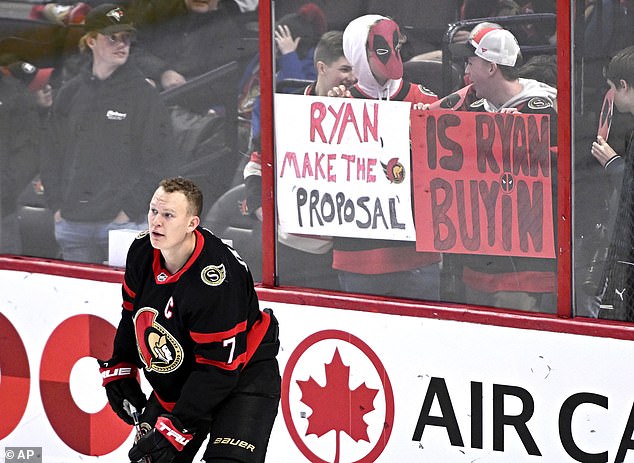 ‘I love Ottawa. I grew up in Vancouver which has my heart always but also grew up in Ottawa. I spent a long time in Vanier which is a little town,’ he continued on the show.

Ottawa is currently in a transition, trying to reach the playoffs for the first time since 2017 – when they went to the Eastern Conference Final.

The Canucks beat the Senators 6-4 in Tuesday night’s game, with the victorious team using it as a moment to poke fun at their hometown son – tweeting ‘Ryan Reynolds approves this W’.