When I tell friends I’ve moved to a boat with my partner and five-year-old daughter, they generally have one of two reactions: disbelief or envy.

The former erroneously think we have become hippies and decided to live off-grid; the envious imagine us cruising the canals of England, avoiding Covid in carefree bliss. But, as we have discovered, the reality is both somewhere in between and neither.

Four weeks ago, my partner Mickael and I swapped our two-bedroom flat in Camden, North London, for a 70 ft-long boat moored at Limehouse Marina in the East End. It’s now our home and where we will be bringing up our daughter, Sidonie.

Hilary Freeman and her partner Mickael decided to leave behind their two-bedroom flat in Camden, North London, and instead purchase a 70ft-long boat which they live on with their five-year-old daughter Sidonie. Pictured, the family onboard their new home 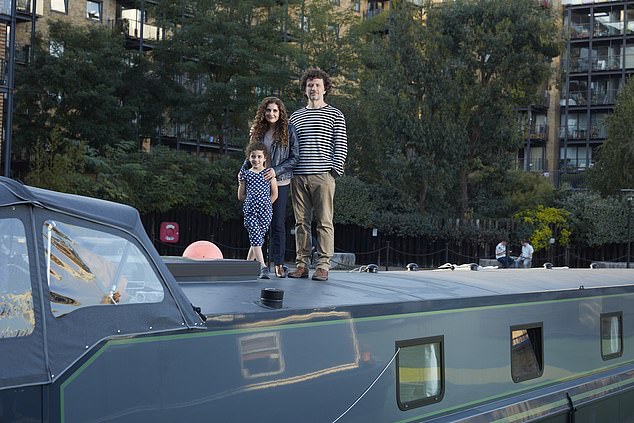 Instead of living in the hustle and bustle of Camden, the family are now moored at Limehouse Marina in the East End in their boat which cost them £230,000, including the mooring

Despite what some may think, we haven’t taken leave of our senses. I might as well mention now that the boat cost us about a third of the price of an equivalent-sized flat in Central London, at £230,000 including a mooring.

And the market is, if you will pardon the term, buoyant. Over the past decade, houseboats have increased in value by 400 per cent. In London more than 10,000 people now live on boats, according to broker Right Boat, and around 25 per cent of England’s 33,000 inland boats are permanent homes.

This year there has been an unprecedented explosion in the number of live-aboard boats sold. Specialist agent Riverhomes reported houseboat sales were an astonishing 880 per cent higher in London in June/July 2020 compared with last year, with several dozen sold in weeks as people sought a more adventurous lifestyle.

Nicholas Austin, senior consultant for Riverhomes, says they are also being bought as pieds-à-terre: ‘Many people can’t work remotely and can’t afford a large family home but don’t want to spend hours commuting. Instead, they’re spending Monday to Thursday night on their houseboat and returning to the big house in the shires on Friday nights.’

After being stuck in a small flat with a young child during lockdown, it is wonderful to have a change of scene. Rather than incessant police sirens, the soundtrack to our daily lives is now the calls of coots and swans. At night, we sit on our covered deck and watch the lights twinkling on the water.

Like ‘glamping’, our experience is a curious mix of luxury and basic survival. Our spacious boat has two full-size bedrooms, central heating, electricity and broadband, and all the mod-cons you could wish for, including a fully fitted kitchen with an island, dishwasher and washer-dryer. 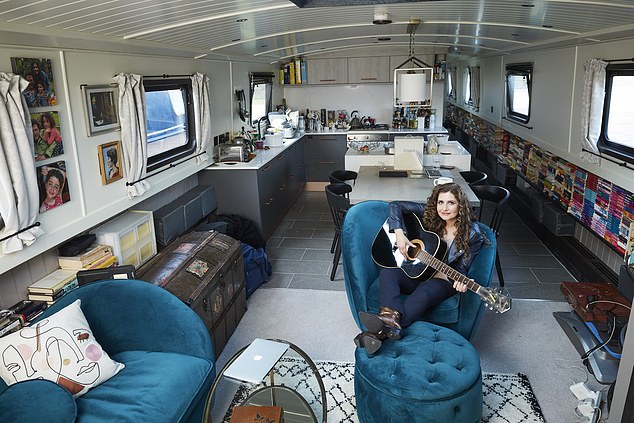 Paying just £230,000, the boat cost them about a third of the price of an equivalent-sized flat in Central London and so the couple decided to take the plunge

The bathroom has his and hers sinks, a bath and a separate shower, and our bedroom boasts a flat-screen TV that glides up from the end of our king-size bed.

There is absolutely nothing off-grid about our lifestyle: we have a coveted mooring in a secure, gated marina that costs an extra £1,000 per month. We pay council tax and have a TV licence and our own postbox.

On the other hand, we do have to fill up our water tank every few days, which means crawling across the top of the boat to attach a hose between tank and tap. Our bed is on top of said tank, making it so vertiginous that I have to launch myself on to it sideways like a high-jumper.

In order to cook we have to buy and connect gas canisters, and if we want to use our central heating we must make sure there’s enough diesel in the fuel tank. We are almost out, and the diesel boat isn’t due back for two months.

In the meantime, we are topping it up using jerrycans. The boat jolts occasionally and makes strange groaning noises as if it’s haunted — unlikely given that it was built this year. There isn’t much storage space (the engine has to go somewhere), and weight is an issue — Covid or no Covid, no more than eight people will ever be allowed on our boat, lest it sinks.

Most onerously, every week we have to ‘pump out’ our toilet, which means driving the boat in a zigzag across the marina to the pump-out station, where we can attach a hose and empty the tank.

Our insurers say we aren’t allowed to drive her by ourselves for a year until we’ve completed a helmsman’s course. So we are reliant on the goodwill of neighbours to escort us like toddlers being taken to the toilet. 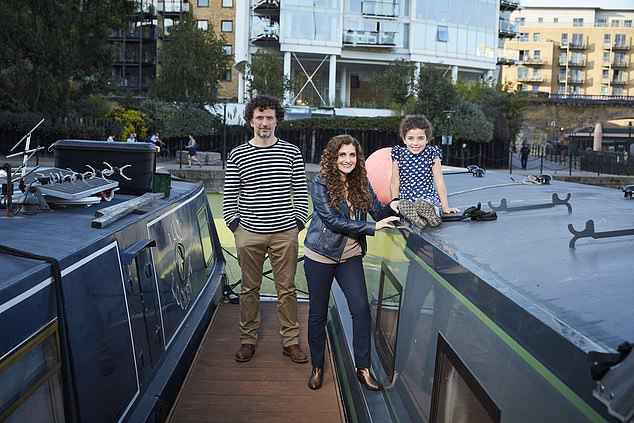 They join a bouyant market, with houseboats increasing in value by 400 per cent over the last decade. In London more than 10,000 people now live on boats, according to broker Right Boat

As I write, we are unable to use our toilet because the tank is full and, because it is windy, no one feels confident to steer us for fear of crashing into other boats. We are having to use the marina facilities at the other end of the long pontoon, which isn’t much fun in the middle of the night. We may have to invest in a chemical toilet.

Living on a boat has always appealed to my romantic side. I love being on or by the water, and on trips to Amsterdam I would gaze enviously at the houseboats, imagining another way of life. The fantasy became reality in January when we knew we urgently needed to sell our flat, which had an interest-only mortgage and a very short lease, but could not afford to buy in London.

We then discovered that a brand new two-bedroom boat in a Central-London marina was around a third of the price of a two-bedroom flat overlooking it.

We have named our boat Elodie in tribute to our daughter who was stillborn eight years ago, and whose ashes we scattered in the sea. Soon, her name will be painted on the side in gold leaf, so she is always with us.

The boat was both a practical and an appealing solution to our problem: a new home and an adventure rolled into one.

Although we did not pay stamp duty and we pay the lowest band of council tax, this is not a cheap way of life. Our boat needs regular maintenance and in five or six years, we will have to pay thousands for her to be taken out of the water for a fortnight so her hull can be ‘blacked’ (given a protective coating).

THE MOST LUXURIOUS PROPERTIES TO FLOAT YOUR BOAT

Moored near Putney, just across the river from the Hurlingham Club, this renovated barge has three double-bedrooms, one with en-suite, plus a roof terrace, utility room, 24-hour concierge and access to a swimming pool and a gym.

A converted 1930s steel barge with 5,000 sq ft of space. For James Bond wannabes, there is even a jet-ski platform. 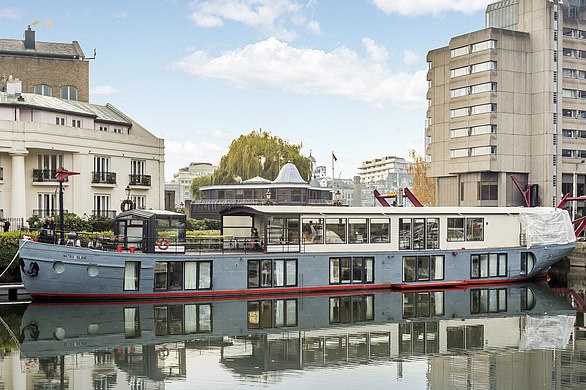 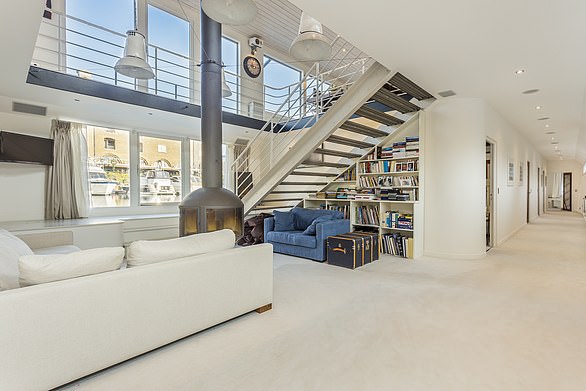 Inside the enormous converted 1930s steel barge is 5,000 sq ft of space with impressive modern interiors andeven has a jet-ski platform

This two-storey Dutch barge has panoramic views over the River Itchen. It features two bedrooms, one en-suite, plus a pantry and its own garden with seating and a shed.

A former Belgian grain boat with her own large ‘garden’ and sun deck, as well as four bedrooms, five bathrooms and a walk-in-wardrobe. Insulation means she’s cool in summer, warm in winter. 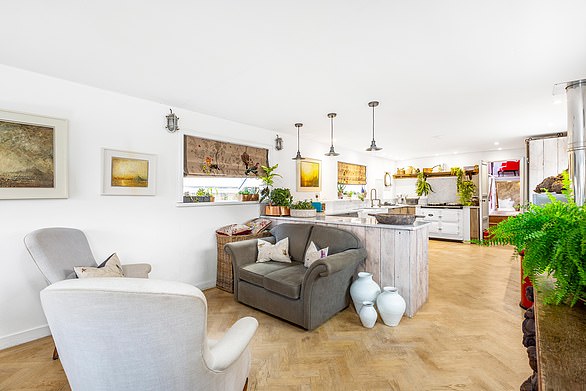 This three-year-old house-boat lies permanently on the Chichester Canal. It has two bedrooms, vaulted ceilings, mezzanine storage and use of an adjacent garden.

This Dutch-built boat won an award for best power yacht in 2005. Compact enough to cruise the canals, she has air-conditioning, a Jacuzzi, teak decks and no fewer than five bedrooms. 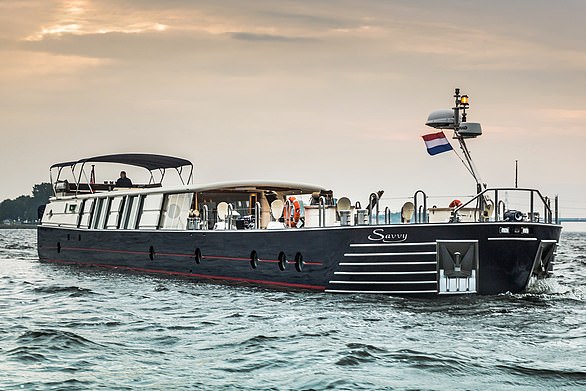 Savvy is moored at Cadogan Pier, in Chelsea, South-West London and won best power yacht of the year in 2005 – complete with air-conditioning and a Jacuzzi

Adapting to boat-living takes time. We wear our greenness like a neon sign declaring ‘From Land’. One day, a week after moving in, I was so despondent that I cried. Twice. Our water tank was empty, the machine was mid-wash-cycle, and Mickael, who’s in hospitality, was at work.

I did not relish the prospect of climbing across the top of the boat with a too-short hose, while also trying to care for our fearless five-year-old, who has to be repeatedly told not to jump on and off the boat.

Then, as we made our way out for the sanctuary of John Lewis, I forgot about the hatch at the top of the stairs, and cracked my head so hard I saw stars.

‘Everyone does that once,’ I was told by several neighbours. ‘You have to remember to duck.’ So far, I’ve forgotten to duck five times.

Having been compared to both Imelda Marcos and Carrie from Sex And The City, I am not altogether suited to the space constraints in the boat.

When we moved in, my many wardrobe boxes became legend among the neighbours (apparently, photographs did the rounds).

Our beautiful, stained-oak fitted wardrobes are, we have realised, 15cm too shallow to accommodate our clothes properly. I have been advised to hang my clothes sideways on special hangers, which means another unaffordable loss of storage space. 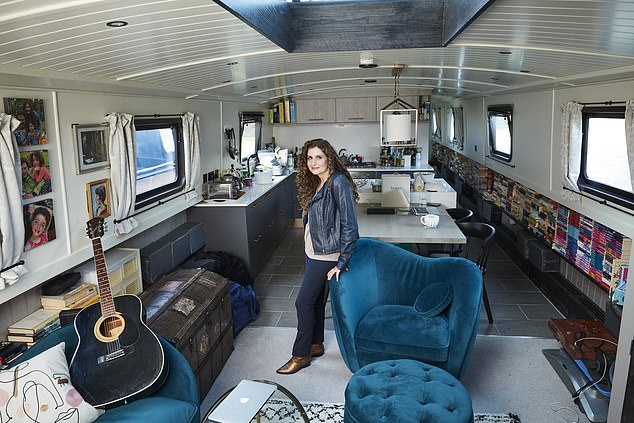 So we have hired a carpenter to turn the void where the diesel stove used to be into another wardrobe, build bookshelves and find ingenious places to keep our possessions. We are soon to be rid of the pop-up bedroom TV and, instead, my shoe collection will rise up on hydraulic shelves. I bet even Imelda didn’t have that.

It’s hard to find your ‘sea legs’ in stilettos, so I find myself living in jeans and trainers.

One of the best things about living here is the sense of community. There are people from every walk of life, from engineers and City traders to musicians and writers, but we all share a common bond: the mild eccentricity of boat living.

I’ve never experienced such neighbourly friendliness. Everyone leaves their front doors open and within the first few days we had been invited for drinks and for tea, and received gifts of cupcakes, pickles and jam. Of course, as in all communities, there is also a lot of gossip — and politics.

The prospect of a second lockdown here does not alarm me. My neighbours tell me that they miss aspects of the first, which brought the community even closer together. There were deliveries of fresh fish, bread, fruit and vegetables, communal yoga classes on our own decks, and the weekly NHS clap generated so much noise it made the news.

Despite our teething problems, I know I’m going to love it here. Friends have told me I look more relaxed than I have in years, and all the physical activity has made me feel fitter and stronger.

This is definitely not a life for couch potatoes or for people who are precious about bodily fluids. One request: if you come to visit, please don’t ask to use the loo.