The family of a Bloody Sunday victims have launched a legal challenge to maintain a murder case against a former soldier.

Soldier F has been facing charges of murdering James Wray and William McKinney in Londonderry on January 30, 1972, when troops opened fire on demonstrators in the city’s Bogside, killing 13 people.

Northern Ireland’s Public Prosecution Service had been due to withdraw proceedings against Soldier F at Derry Magistrates’ Court on Friday.

But the PPS asked for that hearing to be adjourned after a brother of one of the victims secured judicial permission to challenge the prosecutors’ decision at a High Court hearing in the autumn.

Mickey McKinney, brother of Bloody Sunday victim William McKinney, welcomed the court decision to grant leave for him to challenge the decision to halt the prosecution of the man who was charged with the murder.

Soldier F has been facing charges of murdering James Wray (left) and William McKinney (right) in Londonderry on January 30, 1972, when troops opened fire on demonstrators in the city’s Bogside, killing 13 people

‘Our family are delighted at this intervention,’ he said. ‘The PPS should not have contemplated discharging Soldier F in circumstances where the High Court is already actively considering the decision making surrounding decisions not to prosecute F for his involvement in two further murders.

‘The position it adopted was a source of great distress to our family. This represents a victory today for us, Jim Wray’s family and those wounded by Soldier F.’

A barrister representing Soldier F told the High Court in Belfast on Thursday that he would not oppose Friday’s adjournment application in Derry, given the court assurances that September’s legal challenge is to be expedited.

Last week, the PPS announced that the case against Soldier F would be discontinued.

The PPS said the prosecution of another veteran, Soldier B, for the murder of 15-year-old Daniel Hegarty in Derry later in 1972, would also not proceed. 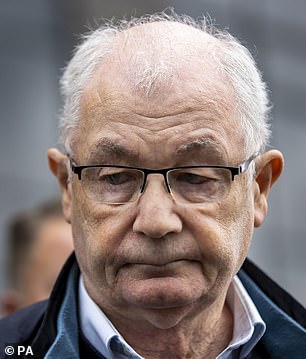 The decisions came after the PPS reviewed the cases in light of a recent court ruling that caused the collapse of another Troubles murder trial involving two military veterans.

The Crown cases against both Soldier F and Soldier B hinged on evidence of a similar nature to that which was ruled inadmissible in April’s trial of Soldier A and Soldier C for the 1972 murder of Official IRA leader Joe McCann in Belfast.

Faced with the likelihood of that type of evidence being ruled inadmissible again in any future trial, the PPS announced the discontinuation of the prosecutions, claiming there was no longer a reasonable prospect of convicting either Soldier F or Soldier B.

Mr McKinney’s brother Mickey had challenged the PPS decision to halt the prosecution of Soldier F.

On Thursday, two judges sitting in the divisional court of the High Court in Belfast granted leave for Mr McKinney to challenge the decision by way of a judicial review in September.

After granting leave, Mrs Justice Keegan, sitting with Mr Justice Horner, told the PPS’s barrister that it would be ‘pragmatic, purposeful and useful’ if the timetable for withdrawing the prosecution was reconsidered to reflect the decision to allow a legal challenge.

After seeking instruction from his client, barrister Dr Tony McGleenan QC told the court that the PPS would be seeking to adjourn Friday’s hearing.

He explained the PPS code obliged prosecutors to bring cases back to court when a decision had been taken to withdraw proceedings.

‘The grant of leave in this case has altered the position quite significantly in that regard and alters the position in respect of the code as well,’ he said. 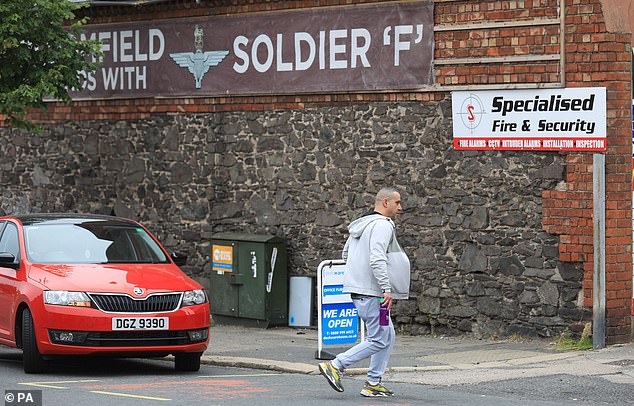 A banner supporting soldier F, the British army veteran charged with murdering two men on Bloody Sunday in 1972, hangs from a wall in east Belfast

‘So the position the PPS has adopted is they will appear tomorrow before District Judge Magill and make an application for an adjournment of the committal proceedings until September.’

He noted the issue of adjournment was not entirely in the hands of the PPS and the district judge would have to consider the matter on Friday taking into account the position of Solider F’s legal team.

Mark Mulholland QC, representing Soldier F, told the divisional court on Thursday that he would not seek to oppose the adjournment.

He said he was not ‘abandoning’ his position in respect of a delay being potentially prejudicial to his client, but he acknowledged that it was the divisional court’s intent to deal with the judicial review quickly.

‘I feel that bearing in mind the strictures that have been placed upon that (judicial review) and that it is to be revisited in a very short time frame, then certainly I would not be seeking to oppose the adjournment application tomorrow before the court,’ he said.

Mrs Justice Keegan welcomed the move to adjourn as a ‘short-term resolution’.

Two distinct sources of evidence were deemed inadmissible by Mr Justice O’Hara in his highly significant April 30 ruling that led to the collapse of the Joe McCann murder trial.

The first were statements taken from the two accused soldiers by the Royal Military Police (RMP) in 1972.

The judge ruled those unreliable because the soldiers were denied several basic legal rights and safeguards when giving their statements to the RMP, including a formal caution and access to legal representation.

Mr Justice O’Hara said it would be unfair to admit that as evidence due to ambiguity over the HET’s purpose, to fact-find or to conduct criminal investigations, and the fact the accused were not informed what offence they were suspected of when cautioned.

The case against Soldier F over the Bloody Sunday murders hinged on the contents of statements taken by the RMP from two other soldiers involved in the events of Bloody Sunday.

Without those statements, the Crown determined it would have been unable to prove that Soldier F was in the Bogside when the shots were fired.

The families of other victims of Bloody Sunday have already secured leave to challenge PPS decisions not mount prosecutions over the killings of their loved ones.

As that case also centres on issues around the admissibility of the RMP statements, Mr McKinney’s challenge is to be heard alongside it and another linked case before the divisional court at the end of the September.