The family of a grandmother who died aged 77 held her funeral service in the back garden so neighbours could participate from the safety of her own home.

Hilda Pattison, 77, from Sunderland was denied a large church funeral because of the Covid-19 restrictions.

So her six sons and daughters brought the grandmother, known as Nana, back to the garden of her home which she cherished. 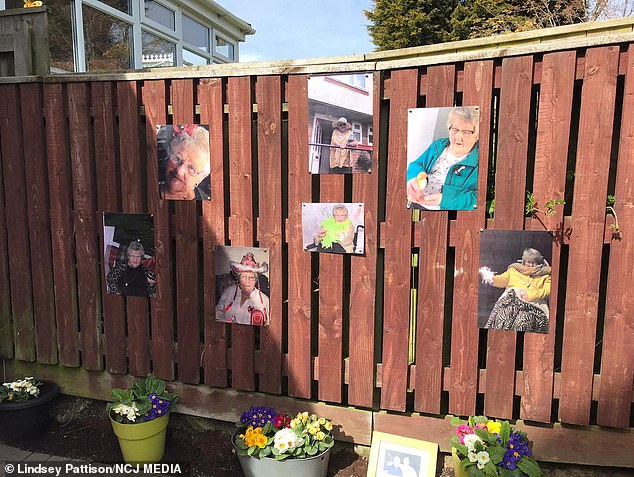 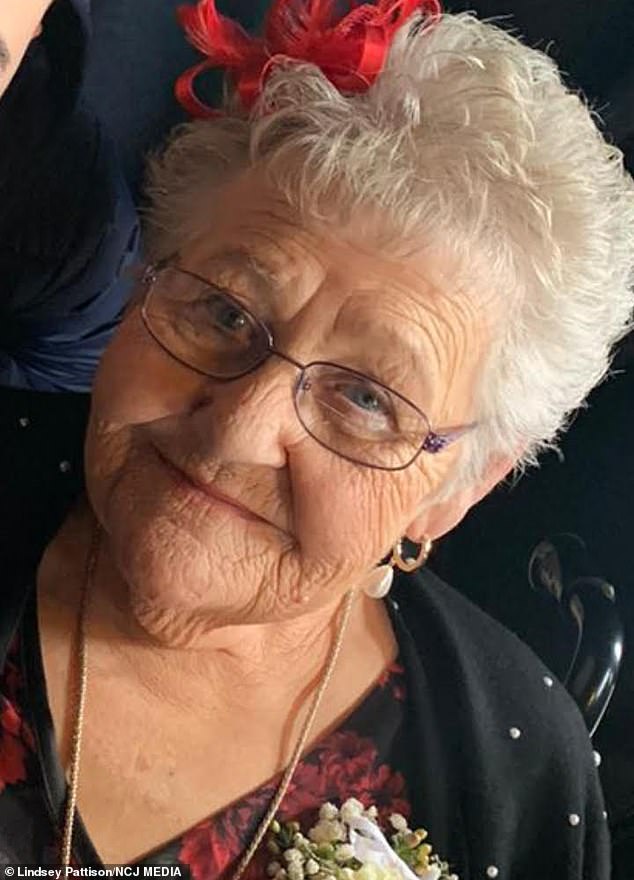 Hilda Pattison, pictured, had spent the past two years being treated for cancer

Her coffin was surrounded by the flowers Hilda nurtured, a sound system was set up so her neighbours were included in the service, while others watched from across their fences and hedges.

When the Government restrictions are lifted, they are throwing a wake to be remembered in her honour.

Her daughter Lindsey Pattison, 39, said: ‘It was beautiful and it’s what mam would have wanted. The garden meant so much to her, so it was the perfect place to say goodbye.’

She continued: ‘Mam passed away at home where she wanted to be. She had suffered kidney cancer that had spread to her lungs and bones, and she fought it for two years.

‘The whole family was around her and most of her 11 grandchildren. We were holding her hand and telling her it was fine for her to go and reassured her we would all be safe. My sister Andrea, who is a singer, had sang her the songs she loved.

‘She gradually got less conscious, but everyone saw her. We sat with her and her breathing gradually changed. We all held her hands and she took her last breath. We were in tears and everyone wanted to touch her skin for one last time.’

Hilda died on March 18 and her garden funeral was held on March 30. 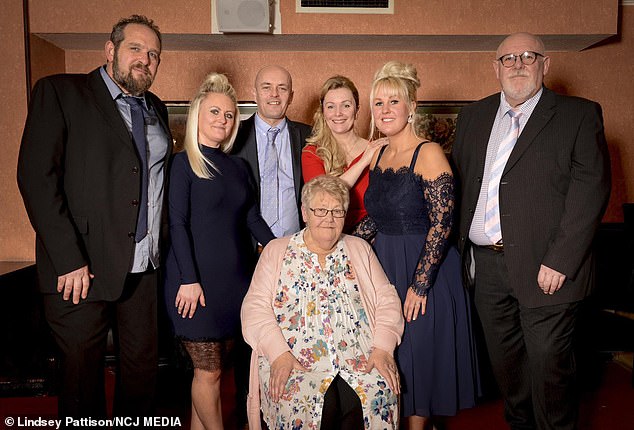 Hilda Pattison, pictured with her six children, from left, Stephan, Nancy, Jimmy, Andrea, Lindsey and David. Her children held the funeral service in her back garden as she was denied a big church service

It was made possible by caring undertakers at Peter Dodd Funeral Directors. Big-hearted neighbours rallied round to help prepare the garden where Rev Jeremy Chadd read his emotional words.

And after the service Hilda was cremated at Sunderland Crematorium where only five members of her immediate family could attend.

Ms Pattison added : ‘Mam’s garden was the hub for everyone and so we thought it was a great place to hold the funeral service – she loved it there.

‘The neighbours were at their front doors and gates as mam was brought down the street.

‘The garden is big enough so we could keep our social distancing and it meant neighbours could also attend but stay in their own gardens. In fact another neighbour opened their garden for other members of our family so we had enough distance apart for all of us.

‘Andrea and her husband set up the sound system so the neighbours could be part of the service.

‘She sang a song she wrote for mam and neighbours stood at their gates and listened.

‘It worked out beautifully, we could all say goodbye at a safe distance.’

Hilda was the ‘go to’ person in her community. Children in the street and beyond called her Nana, she knitted scarves for the homeless and helped out at the soup kitchen.

She was also the inspiration of a charity ball held in October for Down’s Syndrome North East, at which more than £8,000 was raised.

Family support worker Ms Pattison said: ‘Mam inspired us to be the way were are. She was the person everyone went to and she helped them all.

‘When this is all over we are going to have a wake and have bingo and all the things she loved. It will raise money for charity, she wouldhave loved that.’

Hilda was married to Ernie who died from cancer 15 years ago aged 70.

Rev Jeremy Chadd, of St Chad’s Church, East Herrington, Sunderland, said; ‘We brought Hilda to the garden she loved and her neighbours came out to their front doors as she was brought down the street.

‘Hilda died before the restrictions were in place but the rules kept changing as her funeral came nearer.

‘She couldn’t have the church she wanted so she was brought to the garden, where she had many parties with family and neighbours. Her garden meant a lot to her.

‘She helped so many people and never turned her back on anyone who needed support. She was very well thought of in her community.

‘Neighbours were able to listen to the service via a sound system, while other neighbours went to their back gardens where they were part of the service.

‘It was what Hilda would have wanted as her garden meant so much to her.’