Just weeks before Christmas, Rishi Sunak told taxpayers to brace themselves for higher bills in April to fund elderly care and the police.

The Chancellor said town halls will be able to increase council tax by an inflation-busting 5 per cent next year – plus an extra £15 for police forces. This could take the average band D bill from £1,818 this year to £1,924 next year – an increase of £106. For the owners of the largest band H houses, the rise would be £212.

Harry Fone, grassroots campaign manager of the TaxPayers’ Alliance, said: ‘Constant council tax rises are hitting residents hard, yet many people wonder exactly what they are getting for their money.

‘Despite pleading poverty and saying budgets are squeezed, town hall bosses are still wasting cash on senior salaries, pet projects and bungled commercial property purchases. Local authorities should be seeking out these savings before hammering households with eye-watering rate rises.’

The announcement on council tax rises came as the Treasury confirmed that Boris Johnson’s social care plan – first promised in July last year – will not be published until next year.

Mr Sunak skirted round the details of the increases in his Commons speech yesterday, saying: ‘We’re investing in social care. Local authorities will have extra flexibility for council tax and adult social care precept, which together with £300 million of new grant funding, gives them access to an extra billion pounds to fund social care.

‘And this is on top of the extra billion-pound social care grant we provided this year, which I can confirm will be maintained into next year.’

Councils will be allowed to add 3 per cent to their bills to fund adult social care in their areas. This is on top of the 2 per cent increases local authorities can impose without having to hold a referendum. The Chancellor said councils will also be able to add £15 on Band D bills to hand to police and crime commissioners. 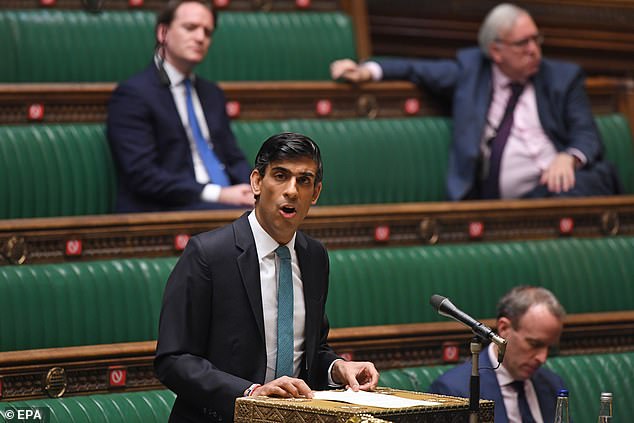 Caroline Abrahams, charity director at Age UK, said the amount of money being granted for social care was ‘insufficient’, and she castigated Mr Sunak for passing the buck on tax rises to town halls.

‘Permitting councils to raise more money for care through increasing council tax isn’t an effective response because the areas where money is most needed aren’t necessarily those with the strongest tax base, leaving those living in poorer areas at a distinct disadvantage,’ she said.

‘The problems facing social care are systemic and need solving nationally, and when government hides behind local authorities like this, it is effectively shirking its responsibility.

‘It’s older and disabled people, and their families and carers, who will as ever pay the biggest price, with more likely to have to manage without the support they need. This is a bitter pill to swallow.

‘The spending review documentation says the Government will bring forward proposals on the longer-term reform of care in 2021, but as a result of the decisions announced today, social care will be even weaker by then.

‘It’s hard not to conclude that we’ve gone backwards.’

House prices could fall by as much as 8 per cent in spring as the stamp duty holiday ends and job losses surge.

The market is currently booming with the help of the tax break.

But prices are expected to slam into reverse when Rishi Sunak’s cut to stamp duty expires in April and the furlough scheme ends, leaving more unemployed, the Office for Budget Responsibility (OBR) warned.

The watchdog estimates that in the second quarter prices could fall by as much as 8 per cent year-on-year.

They are not expected to return to growth until 2023. But even then, by 2025 prices are expected to be 17 per cent lower than they would have been because of the pandemic.

OBR experts also warned that a No Deal Brexit could hammer the market further. This is because it will probably cause unemployment to rise, said the watchdog’s Professor Sir Charlie Bean. ‘Is it reasonable to think there might be more downward pressure on prices [in the event of No Deal]? Probably, yes,’ he added.

It also emerged yesterday that the stamp duty holiday is expected to cost the Treasury more than originally forecast – £3.3billion rather than £2.5billion – because the market has been busier than expected.