Social distancing measures put in place due to the coronavirus pandemic may trigger a resurgence of flu cases next winter, scientists have warned.

Experts fear we are likely to face a ‘severe epidemic in the coming months’ once restrictions are fully lifted as levels of immunity are less than they would be typically.

It comes after figures from the Office for National Statistics (ONS) last year revealed that deaths from pneumonia and influenza were seven times below the average 100,000 deaths they cause each year.

Professor John Edmunds, from the London School of Hygiene & Tropical Medicine, told The Telegraph: ‘If I had to gamble on it, then I would guess that we are likely to get a more severe epidemic in the coming winter – assuming restrictions are fully lifted by then.

Experts have warned that there could be a spike in the number of flu cases once restrictions are lifted. (Stock image)

‘We have effectively missed out on flu this winter, so the levels of immunity are less than would be typical.

‘In fact, it is not impossible that we will have an out-of-season epidemic perhaps in the autumn, rather than winter.’

In October, data from the ONS showed that the influenza caused 394 deaths between January and August.

Deaths from pneumonia and influenza were seven times below the average 100,000 deaths they cause each year, which experts said was due to social distancing restrictions hampering the transmission of the diseases.

The ONS report also revealed that the risk of someone dying from coronavirus was ‘significantly higher’ for all age groups than their risk of death from flu or pneumonia.

She wrote: ‘Social distancing measures have not only reduced transmission of SARS-CoV-2, but also of the flu.

‘Note the remarkable decline in norovirus cases 2020/21 in this next figure vs. what might usually be expected. 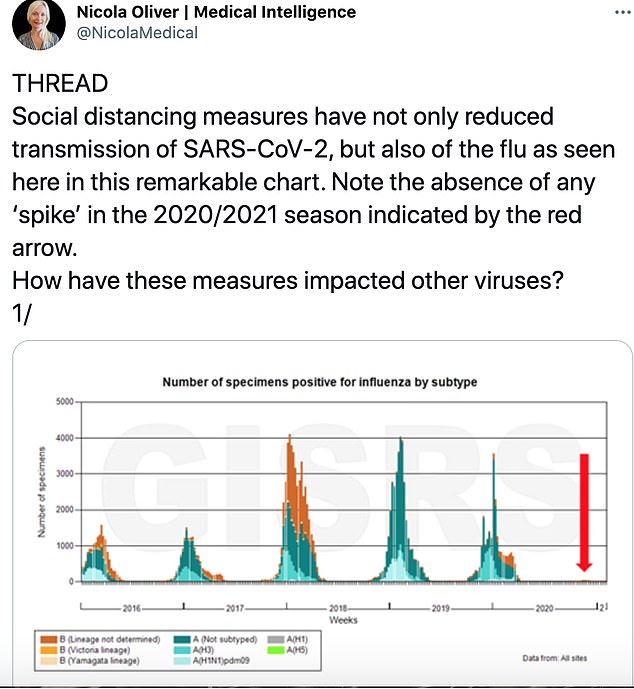 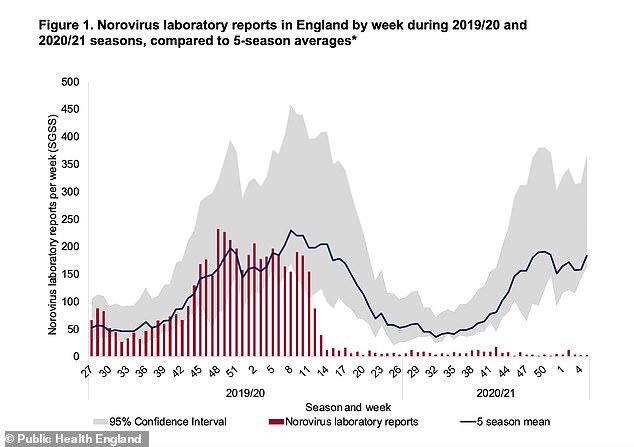 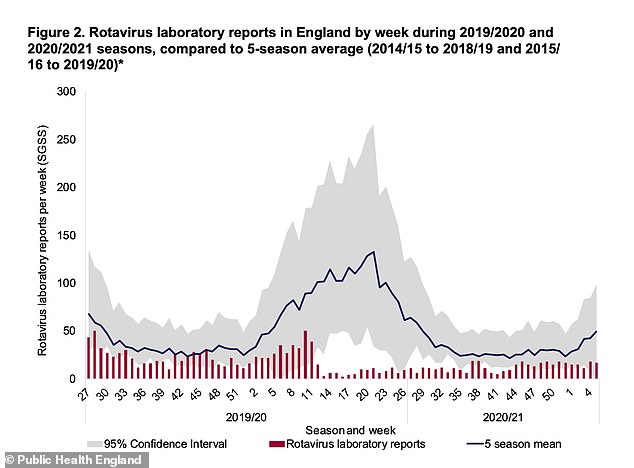 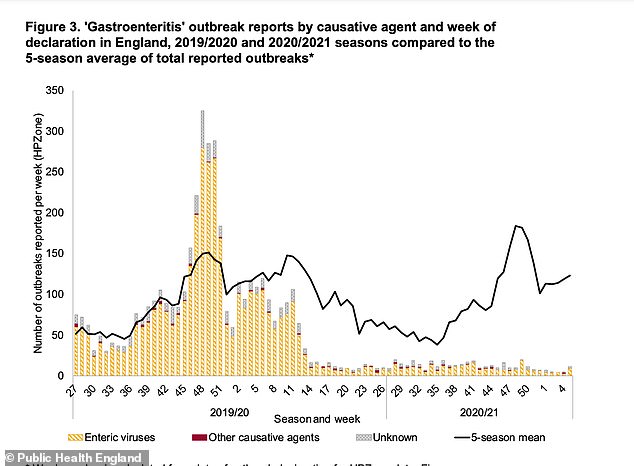 ‘For rotavirus, there is still a noticeable decline compared to what might be expected, but not quite as marked, perhaps because rotavirus is generally seen in younger children and many nursery schools have remained open.’

She added that reports of gastroenteritis were also lower compared to what might be expected too.

She continued: ‘In addition, overall reports of outbreaks of gastroenteritis are much much lower compared to what might be expected too. Enteric viruses are those primarily transmitted by person-to-person contact or by ingestion of contaminated food or water.

‘The reasons for these reductions are considered to be multifactorial and not wholly attributable to a reduction in virus transmission, reporting practices may have altered.

‘However, similar reductions have also been reported in other countries including Germany and the US.’

Last year a study found the seasonal influenza and respiratory syncytial virus (RSV) had infected a fifth fewer people in the United States in 2020 than in an average year.

Researchers from Princeton University found that since the introduction of masks, social distancing and travel bans came into force in the US, there had been a drop of 20 per cent in RSV transmission.

‘We find that substantial outbreaks of RSV may occur in future years, with peak outbreaks likely occurring in the winter of 2021–2022,’ the researchers wrote.

‘Results for influenza broadly echo this picture, but are more uncertain; future outbreaks are likely dependent on the transmissibility and evolutionary dynamics of circulating strains.’