A fake Track and Trace app which allows users to pretend to scan their details in at restaurants and bars has been slammed by health chiefs as ‘irresponsible and pointless’.

The Covid1984 app mimics the real Track and Trace app, meaning its users can show hospitality staff they have entered their details into the NHS’s coronavirus tracking system, when in reality they have not.

It means staff at pubs, bars and restaurants, as well as their customers, could be left in the dark about a visit from an app user with Covid-19.

The app, which is found through a web-link and compatible with Android and Apple devices and is being widely shared among anti-vaxxers and Covid conspiracy theorists, has already been downloaded hundreds of times, according to VICE.

But health chiefs branded it an ‘irresponsible and pointless attempt to subvert a public health tool’.

In a statement, the Department for Health and Social Care told MailOnline: ‘The NHS Track and Trace app is designed to keep people safe and uphold data privacy. 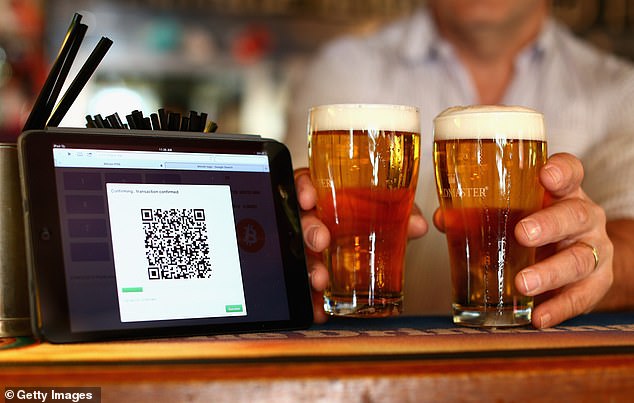 The Covid1984 app mimics the real Track and Trace app, meaning its users can show hospitality staff (pictured: A pub with a QR code at the bar) they have entered their details into the NHS’s coronavirus tracking system, when in reality they have not

It means staff at pubs, bars and restaurants, as well as their customers, could be left in the dark about a visit from an app (pictured above: The app’s web page) user with Covid-19 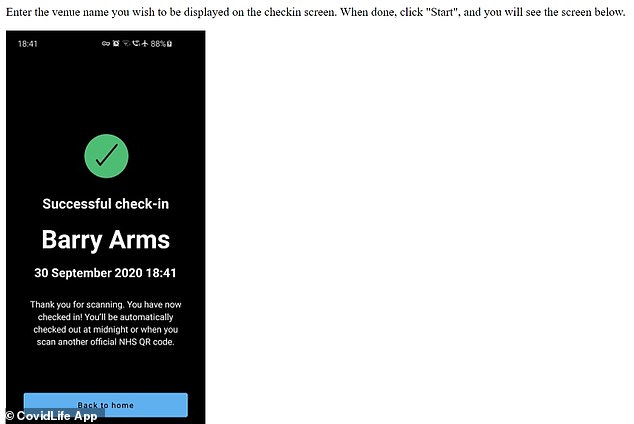 The app, which is found through a web-link (pictured) and compatible with Android and Apple devices and is being widely shared among anti-vaxxers and Covid conspiracy theorists, has already been downloaded hundreds of times, according to VICE

‘It is designed to protect you and your loved ones and the check-in feature means that users can be sent notifications with public health advice if needed. Information is held securely on the user’s phone.

‘Swift action will be taken if any apps are found to be improperly using NHS or DHSC branding to promote use of their app.

Law and orders: Do you really need the trace app to buy a drink?

Government rules on the track and trace app say you do not need to have it to be allowed into pubs and venues.

But customers without it do need to provide their contact details in another way to staff.

If they refuse then they can be barred from going into the bar or restaurant.

Pubs also have to follow the rules of the Licensing Act 2003.

Licensees do have the right to refuse entry to people, but it cannot be unlawful – sexuality, race, or religion are among features that cannot be used to stop customers coming in.

It does say they can refuse entry to people on grounds of ‘public safety’ but if customers did provide some contact details it would be difficult to justify on this point.

‘We are investigating the legitimacy of the app referenced in this article, and we will take any appropriate action if determined to be necessary.’

Named with a nod to George Orwell’s dystopian novel 1984, Covid1984 is being shared among Covid conspiracy theorists – who believe the deadly virus is being used by the government to permanently erode civil liberties.

On the web-page for the app, which includes a link for ‘tips’ at the bottom, it says: ‘This release is an Android application designed to mimic the appearence of the official NHS Covid-19 app.

‘Covid 1984 allows you to enter the name of any pub/restaurant, and will then display a screen similar to the NHS Covid-19 app confirming that you have scanned the code.

‘The app does not require the internet, or communicate with NHS servers or other devices via Bluetooth.’

The real NHS Track and Trace app, which has been downloaded more than 10 million times already, has been described by health chiefs and experts as a ‘game changer’ in the war against Covid-19.

The app uses Bluetooth to determine if someone has been within two metres of an infectious person for 15 minutes.

The app’s other major use is within pub, bar and restaurant, where customers at the start of the pandemic asked hand over a name and telephone number or email address on entry.

The details were used to in case of an outbreak, with customers being contacted if someone who visited the same restaurant or bar at the same time later found out they were infected with coronavirus.

The NHS Test and Trace app tells people their local area risk level (left), allow them to check in to places they visit (centre) and warns people if they have been in contact with someone who tests positive or if they report symptoms themselves (right)

But since the launch of the app, bars and restaurants are now required to have a QR code – a black and white drawing which can be read by a mobile phone camera – at the entrance which can be used to digitally sign in. Visitors can still pass over their details in other ways if they do not have the app.

Government rules on the track and trace say you do not need to have the app to be allowed into pubs and venues.

Bluetooth technology will keep a record of which phones spend 15 minutes within 2metres (6’7′) of one another and then alert people if they have been near someone who later tests positive for Covid-19.

People’s phones are only recognised by the system if they are running the app themselves – it cannot detect others.

The contacts it keeps track of are all anonymous and phones exchange digital ‘tokens’ with every app-using phone within Bluetooth range.

If one person develops symptoms of the coronavirus or tests positive, they will be able to enter this information into the app.

The phone will then send out a notification to all the devices they have exchanged tokens with during the infection window, to make people aware they may have been exposed to COVID-19.

Each phone keeps an individual log of the Bluetooth profiles someone has come close to. These will then be linked anonymously to people’s NHS apps and alerts can be pushed through that even after the person is out of bluetooth range.

People can delete their data from this app at any time.

Users will also have an ‘isolation companion’ which has countdown timer if someone has to self-isolate, and will be able to ‘check in’ to places such as pubs and restaurants using QR codes.

They will also be shown what the risk level is in their local area based on the first half of their postcode, with places being categorised as low, medium or high risk.

Will the app tell me what to do?

The app can only react to data that people put into it, and it will only ever offer guidance. If a user reports that they have symptoms of coronavirus – a new continuous cough, a fever, or a changed sense of smell or taste, they will be urged to self-isolate for 10 days from the start of the symptoms and to get tested.

If they test positive for Covid-19 at any time, they should report this to the app. The app then sends out an anonymous alert to everyone with whom that person has been within 2m (6’7′) of for 15 minutes or more since they started feeling ill.

That person may then be asked to self-isolate or to get tested if they feel unwell. 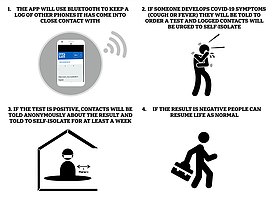 How well does it work?

The app is far from perfect, with the Department of Health has admitted that around half of people who are warned they have been near an infected person will actually not have been within the 2m for 15 minutes danger window.

But if customers refuse to hand over details then they can be barred from going into the bar or restaurant.

Pubs also have to follow the rules of the Licensing Act 2003.

Licensees do have the right to refuse entry to people, but it cannot be unlawful – sexuality, race, or religion are among features that cannot be used to stop customers coming in.

It does say they can refuse entry to people on grounds of ‘public safety’, but if customers did provide some contact details it would be difficult to justify on this point.

However, as previously reported by MailOnline, venues have been refusing entry to customers who have not downloaded the NHS Covid-19.

Families claim some venues have refused to let them in, despite the government’s own guidance stating it should not be a precondition of entry.

The rules only tell businesses they ‘must’ display the ‘official NHS QR poster’ and apply for a code to be connected to the app.

But customers without the special phone system should still be allowed in as long as they supply their contact details in some form.

Mother-of-two Clare Wakelam, 47, said she and two others had been due to go for lunch at Turtle Bay in Birmingham, West Mids, but was turned away when they did not all have the app.

The local authority worker from Walsall said she happily provided her contact details but thought the phone software would cause too many issues.

She told MailOnline: ‘When it was our turn the person at the door unless we all downloaded the app we couldn’t enter the establishment.

‘We went to a pub and we walked in fine and wrote our name and number down.

‘If Turtle Bay had just asked for our details we would have handed it over happily, I’ve done it everywhere else I’ve been.

‘I won’t download the app because I’m thinking it will cause too much trouble with how it alerts you and how sensitive it is.

‘With the app I think about older people who haven’t got phones like that so can’t get it. I also think what if the battery goes or the data allowance is used up – there are things that can go wrong.

‘I think it’s wrong that businesses are turning people away for things like this. I won’t be going back.’

Turtle Bay’s website spells out customers have to download the app, adding ‘We now need to ask everyone entering our restaurants to enter their contact details on the NHS Covid-19 App when they arrive.

Actress Nicola Thorp, who starred on Coronation Street as Nicola Rubinstein, said she too had fallen foul of strict venue bosses.

She tweeted: ‘Just got asked to leave a cafe because my phone is broken and I couldn’t access the Track and Trace app to login.

‘Offered to give my personal details instead but was told that wasn’t good enough. What are people supposed to do if they don’t have a smartphone?’

The NHS Track and Trace app was finally released on September 24 after months of delays.

The first attempt was abandoned in June because it did not work on Android smartphones.

The NHS’s app was unable to spot 25 per cent of nearby Android users and a staggering 96 per cent of iPhones in the Isle of Wight trial.

This was because the Bluetooth system developed by the NHS effectively went into ‘sleep mode’ when the phone screens were locked and developers couldn’t fix the glitch.

Different Bluetooth technology made by the phone manufacturers Apple and Google themselves has turned out to be significantly better at detecting other phones.

Officials said the app software now reliably detects 99.3 per cent of nearby app users, regardless of what type of phone they have.

Speaking ahead of the launch, Health Secretary Matt Hancock said: ‘Health ‘We need to use every tool at our disposal to control the spread of the virus including cutting-edge technology.

‘The launch of the app later this month across England and Wales is a defining moment and will aid our ability to contain the virus at a critical time.’