Atila Ardic, 25, attacked his first victim after picking her up as she drunkenly tried to hail an Uber home from a Christmas party in Covent Garden on 8 December 2017.

She woke up in the backseat to find the car parked and Ardic forcing himself on her before making her way home where her boyfriend found her bruised and crying.

Ardic drove to a garage immediately after and helped himself to a packet of cigarettes using the victim’s card, which she had dropped in her hurry to escape his clutches.

He struck again the following evening, when he preyed upon another woman on her way home from a party who also fell asleep before waking to find his hand under her clothing.

He hurled abuse at the victim as she broke free, calling her a ‘f***ing b***h’ before she made off and reported the ordeal to police.

Atila Ardic, a sexual predator who posed as a mini cab driver to carry out two sexual assaults on vulnerable women who were on nights out, has now been jailed for two and a half years

The long road to justice for bogus taxi driver

December 8, 2017: He picks up first victim in Covent Garden before attacking her in a secluded area near Waterloo

December 9: He picks up second victim in Stoke Newington before attacking her in a secluded area of Islington

January 2018: Ardic is arrested and gives a no comment interview

September 27, 2019: Ardic is charged after months of investigation by officers

July 22, 2020: Ardic pleads guilty to two counts of sexual assault, one count of theft and one count of fraud

September 30, 2020: Ardic is sentenced to two and a half years in prison

Ardic claimed he had carried out the vile abuse because of ‘feelings of inadequacy’ about not having a girlfriend, Wood Green Crown Court heard.

He was disqualified and had hired a car from an online rental service by posing as his mother in order to carry out his sick fantasies.

Bearded Ardic appeared in the dock wearing a black jacket and jeans with glasses and spoke only to confirm his details.

The predator shut his eyes as he was sentenced to two and a half years imprisonment for the ‘absolutely horrible’ offences.

Anthony Robert Waller, defending, said: ‘He was having feelings of inadequacy about himself.

‘The words he used were “young and dumb”.’

‘He didn’t have a girlfriend. For whatever reason he allowed these to dictate his driving forces on that night.’

‘On 8 December 2017, the first of your victims had been at a Christmas party in Covent Garden.

‘She’d obviously had a lot to drink and tried to get an Uber cab to take her home.

‘She ended up in Upper Street, and had the misfortune to be standing on the pavement there when you drove past.

‘At the time you were a disqualified driver. You were effectively masquerading as your mother who was not disqualified in order to manipulate the process by which [the website] hires cars.

‘At any event you persuaded her to enter the car. She fell asleep and woke no doubt horrified to find you in the backseat with her and you trying to sexually assault her.

‘She does not recall in detail where you touched her.

‘This was a sexual assault that came to an end only because she was able to fight you off.

‘This must have been terrifying. She didn’t start the evening in an injured state and by the time it came to an end she had bruising.

‘She dropped her purse. You remarkably having conceded defeat, drove off immediately to a garage and at her expense bought a package of cigarettes and then drove home.’

The judge said the victim believed Ardic had been trying to rape her.

Judge Dodd went on: ‘Well she went back to her address which she shared with her boyfriend and such was her distress that she said to her boyfriend who saw her crying uncontrollably, she told him that somebody had actually tried to rape her.

‘I recite that as an indication of the fear that you put this young woman into.

‘You didn’t stop there. The following day you did exactly the same thing cruising the streets looking for [the next] victim… who fell into your grasp. 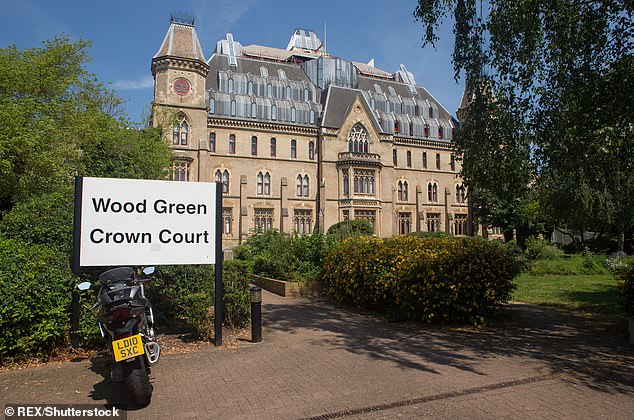 ‘She’d also been at a party, been drinking and was looking for a cab. She also fell asleep.

‘She made good her escape and you drove off. She reported it to the police. They did some impressive work, eventually identifying you as the culprit.

‘The only reason you were out in the small hours of the morning was to find suitable victims.

‘There was abuse of trust – both of these women believed they were getting into legitimate cabs.

‘You effectively took these girls to assault them from a public place.

‘The whole gravity of this case is that you were masquerading as a cab driver assaulting vulnerable women.’

He was sentenced to 30 months imprisonment and placed on the Sex Offenders’ Register.

Police Constable Jonny Harris, from the Met’s Roads and Transport Policing Command, said: ‘Today’s sentencing reflects the seriousness of Ardic’s offending. There were a number of aggravating factors considered in this sentencing, despite Ardic’s guilty plea. The most prominent being the abuse of trust and the planning of these horrible assaults.

‘This conviction would not have been possible without these young women coming forward to the police. Both showed great courage and a great deal of patience throughout a lengthy investigation.’