Fake ID papers used by Nazi SS leader Heinrich Himmler to try and escape Germany at the end of World War Two have been unearthed 75 years after his death.

The fake document said Himmler was a sergeant named Heinrich Hizinger and was vital to his capture just a few weeks after the end of WWII.

When Himmler received the news of Hitler’s death, he travelled to Flensburg where he remained for the first week of May.

On May 15, 1945 he dismissed his staff and left with two companions for a hide-out in the Harz Mountains.

Heinrich Himmler (pictured) was head of the SS, a key architect of the Holocaust during WWII and was one of the most-wanted Nazis still alive after Hitler’s death 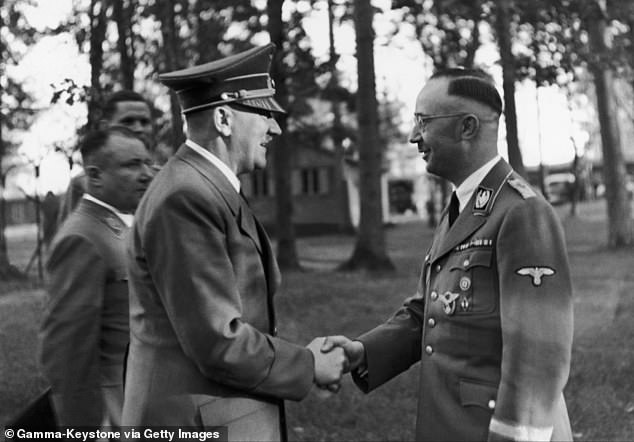 When Himmler received the news of Hitler’s death, he travelled to Flensburg before planning to hide-out in the Harz Mountains. Pictured, Adolf Hitler (left) congratulating Heinrich Himmler (right) in 1943

The three men set out on foot, moving across country, seeking cover in the woods, and sleeping in sheds or haystacks.

Himmler’s group were stopped on several occasions but managed to bluff their way through, until they tried to cross through Meinstedt in Bremervörde, northern Germany, on May 22.

They were asked for their identity papers, which were given to German soldiers at the end of the war and listed their name, rank and date of birth, the BBC reported.

But on the document was an official stamp that British military intelligence had seen being used by members of the SS trying to flee the country.

Anyone with these details was to be detained, Himmler was arrested and the next morning the three men were taken to a detention camp. 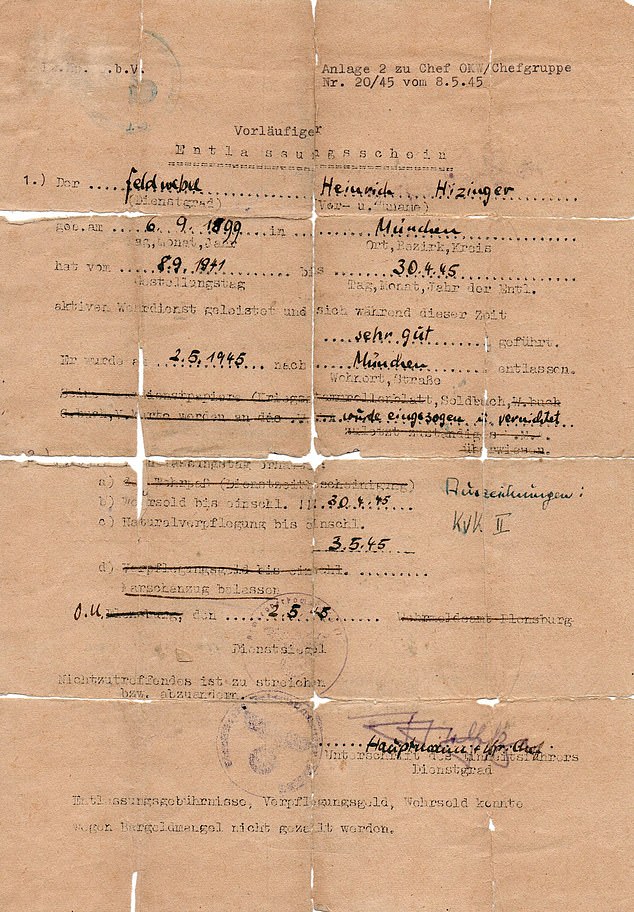 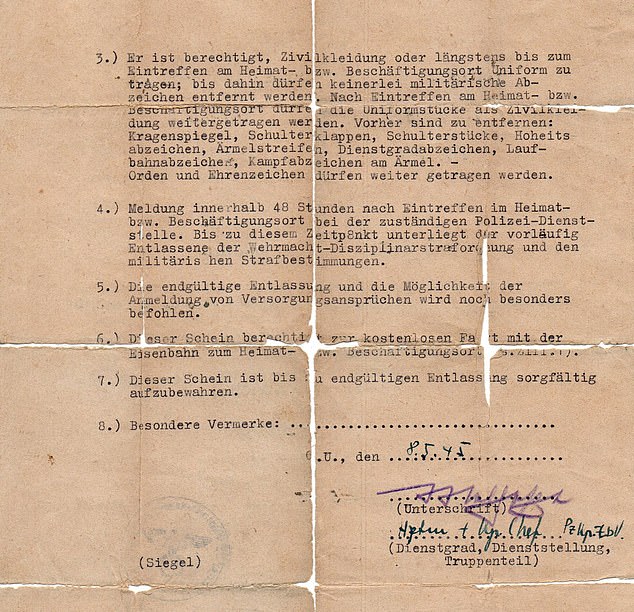 The fake documents (pictured) said Himmler was a sergeant named Heinrich Hizinger but an official stamp on the papers, which were known to be used by fleeing Nazis, caused his arrest 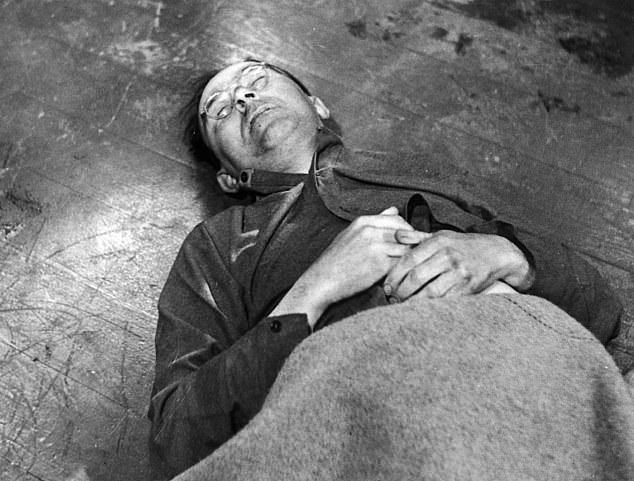 Himmler committed suicide after he was detained and questioned by MI5 officers. A medic inspected his mouth and tried to remove a cyanide capsule, but Himmler crushed it with his death. Pictured, Heinrich Himmler after his death

Upon arrival, Himmler asked to see a senior officer and, even though his cover was still intact, he revealed his real identity.

Himmler was head of the SS and the Gestapo, a key architect of the Holocaust during WWII and was one of the most-wanted Nazis still alive after Hitler’s death.

He was given a ‘gentle interrogation’ by British MI5 officials and medical officer Captain Wells was told to check Himmler over.

Capt Wells found a blue-tipped object hidden in his mouth and tried to pull it out, but Himmler crushed the capsule with his teeth.

It was a cyanide capsule and Himmler was dead within minutes. 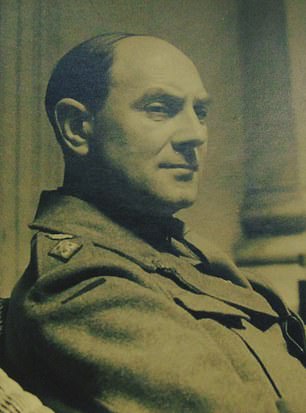 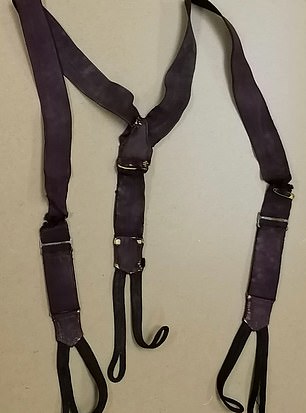 The papers were recently donated by the great niece of Lt Col Sidney Noakes. Noakes (pictured left) was thought to have been given the fake ID papers and the Himmler’s braces (pictured right) by superiors following an MI5 interrogation 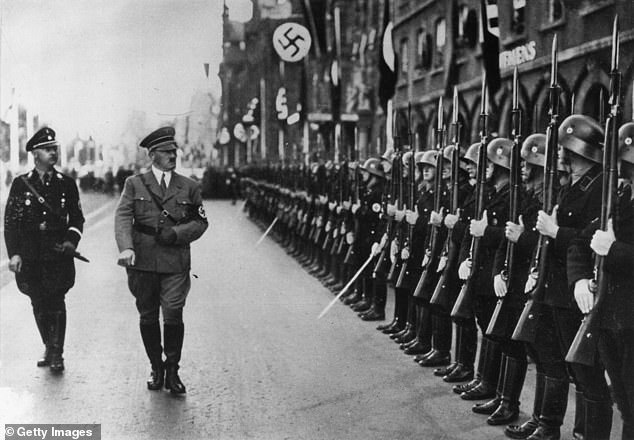 Himmler was detained when he tried to cross through Meinstedt in Bremervörde, northern Germany, on May 22. Pictured, chief of police Heinrich Himmler (left) with Adolf Hitler (right)

The fake documents, key to the Nazi’s capture, have been donated to the Military Intelligence Museum in Shefford, Bedfordshire.

The papers will go on display when the museum reopens and will be seen publicly for the first time in 75 years.

Alongside the papers, the braces that Himmler was wearing when he was captured were also found.

Most of Himmler’s personal items were snapped up by officials, with a sergeant who arrested him getting his slippers and someone else got his shaving foam and razor blades.

The papers were donated by the great niece of Lt Col Sidney Noakes.

Noakes was a lawyer who joined the Intelligence Corps in 1943 but was seconded to MI5.

His role at MI5 remains a mystery but after the war he continued his career as a lawyer and died in 1993. 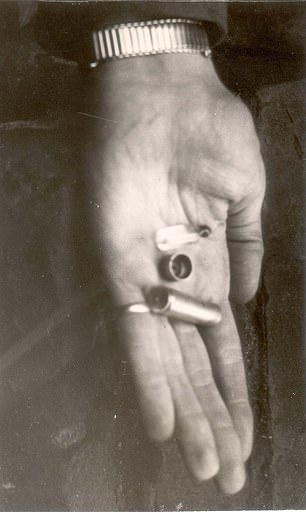 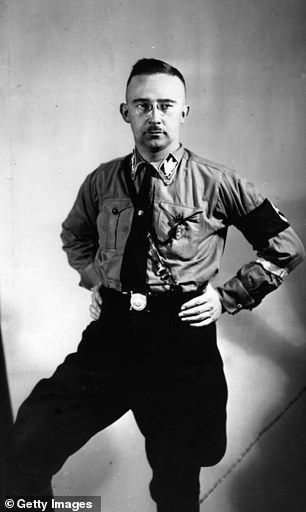 Himmler’s fake documents key to the Nazi’s capture have been donated to the Military Intelligence Museum in Shefford, Bedfordshire, who will display them for the first time. Himmler committed suicide using a cyanide capsule the day after his arrest on May 22, 1945

It is thought that Noakes was one of the unnamed MI5 staff assigned to Himmler’s interrogation and could have been given permission to keep the papers by superiors.

No matter how he came across the items, the documents and braces have stayed with Noakes’ family until now.

The fascinating documents explain how the senior Nazi was caught – by a stamp used by his own people.

Bill Steadman, curator of the Military Intelligence Museum, said: ‘Without this damning stamp on the document it is possible that Himmler may have been able to pass through the system unnoticed, and escape as did many other wanted Nazis.

‘What appeals to me most about this story is that the Germans themselves made his unmasking an absolute certainty.’

The son of a school teacher, Heinrich Himmler was born in Munich on October 7, 1900, and went on to become the architect of the Holocaust and one of the Nazi party’s most dreadful chiefs.

His first involvement with the Nazis was in 1923, and he was their propaganda leader between 1926 and 1930. He was made head of the S.S. – the Schutzstaffel – a major organisation and Adolf Hitler’s personal bodyguard, which became one of the most powerful organisations under his leadership during the Third Reich. Himmler developed it from a 290-man battalion to a huge group with its own military.

He became president of the Gestapo (Secret State Police) once the Nazis had come to power in 1933, and set up the very first Nazi concentration camp, Dachau, the same year.

Himmler was obsessed with the idea of the Germans as the Aryan race and racial purification and encouraged Aryans to only breed with each other in special programmes he set up.

During the Second World War, after Hitler had successfully invaded Poland, he was able to force more than a million Poles and 300,000 Jews out of the west of the country.

In 1941, Himmler was present at the shooting of 100 Jews by firing squad in Minsk. He deciding that having to witness such killings might affect the mental health of his S.S. men, and declared that alternative methods of genocide be found.

In 1942 he was charged with control of ‘the final solution to the Jewish problem’ – the Holocaust. He was given control of the concentration camps, including Auschwitz, and by spring that year it was greatly expanded to include gas chambers. In total, close to six million Jews were killed by the Nazis during the Holocaust.

When it became clear that the Nazis were going to lose the war, Himmler attempted to bargain with the Allies, and Hitler consequently stripped him of all his duties. After the surrender he used a fake identity to try and escape, but was captured.

He committed suicide while being held by the allied forces on May 23, 1945, by swallowing a cyanide capsule.