Facebook said on Saturday that it would block a terminally ill Frenchman from livestreaming his death on the social media platform.

The platform’s announcement followed Alain Cocq saying that he would livestream his death in protest after President Emmanuel Macron turned down his request for euthanasia in a right-to-die case.

Earlier, the man announced that he will refuse all treatment from now on and will not accept food or drink.

Cocq, 57, who suffers from a rare condition where the walls of the arteries stick together, said on Friday that he believed he had less than a week to live and would livestream his death on Facebook from Saturday morning.

He had written to Macron asking to be given a substance that would allow him to die in peace but the president wrote back to him explaining this was not allowed under French law.

Alain Cocq, who suffers from an orphan disease of the blood, rests on his medical bed in his flat in Dijon, northeastern France. Cocq announced Friday that he will cease all treatment from this day on and livestream his death on Facebook, who said they would block his attempt 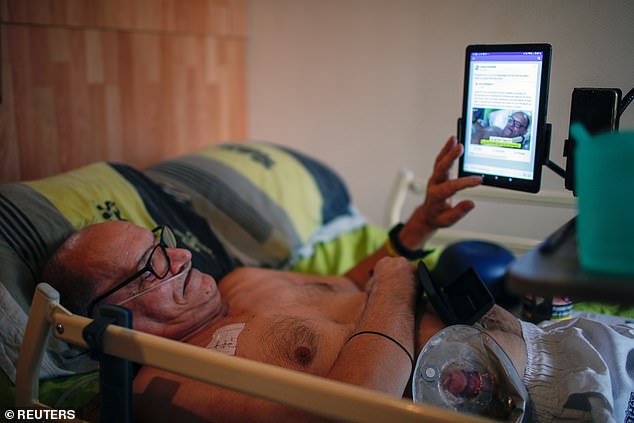 Cocq said on Friday that he believed he had less than a week to live. He had written to Macron asking to be given a substance that would allow him to die in peace. Above, Cocq pictured on August 19

Facebook has been increasingly criticised over the way it polices the content it carries and said on Saturday its rules did not allow it to portray suicide.

‘Although we respect (Cocq’s) decision to want to draw attention to this complex question, following expert advice we have taken measures to prevent the live broadcast on Alain’s account,’ a Facebook spokesman told the AFP news agency.

‘Our rules do not allow us to show suicide attempts.’

Writing on Facebook shortly after midnight in a post announcing he had ‘finished his last meal’, Cocq said: The road to deliverance begins and believe me, I am happy.

‘I know the days ahead are going to be difficult but I have made my decision and I am calm,’ he added.

Cocq had been trying to post another video earlier Saturday when he messaged: ‘Facebook is blocking my video broadcast until September 8.’

‘It is up to you now,’ he said in a message to supporters before giving out Facebook’s French address ‘so you can let them know what you think about their methods of restricting free speech.

‘There will be a back-up within 24 hours’ to run the video, he added.

Cocq had written to Macron asking to be given a substance that would allow him to die in peace but the president wrote back to him explaining this was not allowed under French law.

The Frenchman has used his plight to draw attention to the situation of terminally-ill patients in France who are unable to be allowed to die in line with their wishes.

‘Because I am not above the law, I am not able to comply with your request,’ Macron said in a letter to Cocq, which the patient published on his Facebook page.

‘I cannot ask anyone to go beyond our current legal framework… Your wish is to request active assistance in dying which is not currently permitted in our country,’ said Macron.

In order to show France the ‘agony’ caused by the law in its current state, Cocq said he would broadcast the end of his life on his Facebook page which he believed would come in ‘four to five days’. 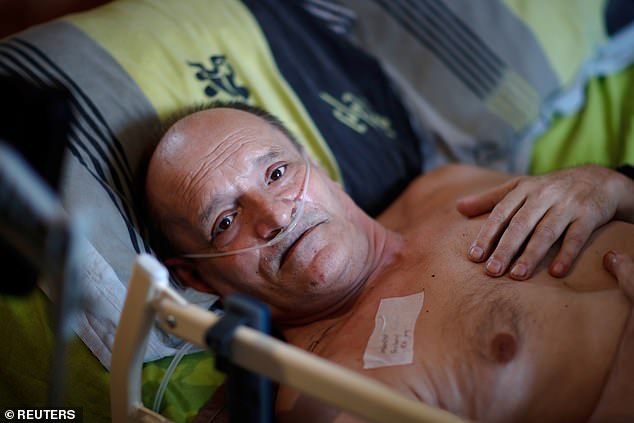 Alain Cocq, 57, in his medical bed he has been confined to for years as a result of a degenerative disease that has no treatment 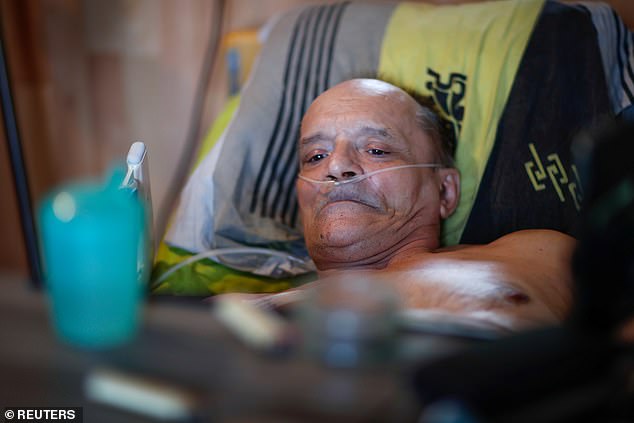 Alain Cocq, suffering from an orphan disease called ‘Ischemia’, rests on his medical bed on August 12. Cocq, 57, has used his plight to draw attention to the situation of terminally-ill patients in France who are unable to be allowed to die in line with their wishes

He said he hoped his struggle would be remembered and ‘go down in the long term’ as a step forwards in changing the law. He would halt all feeding, drinking and treatment from Friday night.

Macron said in his latter that ‘with emotion, I respect your action.’ And the president added a handwritten postscript, saying: ‘With all my personal support and profound respect.’

An Elysee official told AFP that Macron wanted to hail Cocq’s commitment to the rights of the handicapped.

Right-to-die cases have long been an emotive issue in France. 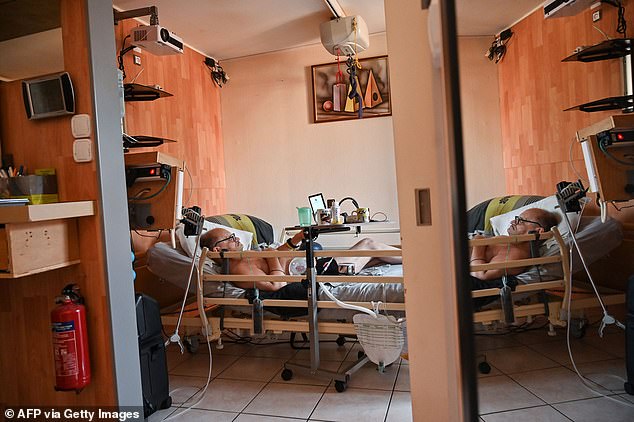 Most polarising was the case of Vincent Lambert who was left in a vegetative state after a traffic accident in 2008 and died in July last year after doctors removed life support following a long legal battle.

The case divided the country as well as Lambert’s own family, with his parents using every legal avenue to keep him alive but his wife and nephew insisting he must be allowed to die.

A French court in January acquitted the doctor who switched off the life support systems in a verdict that was a formality after prosecutors said he ‘perfectly respected his legal obligations.’