Meta CEO Mark Zuckerberg has called on the Facebook parent company to scale back the Metaverse after it saw its slowest quarterly revenue growth since 2012.

The company’s total revenue, the bulk of which comes from ad sales, rose 7 percent to $27.91 billion in the first quarter, but missed analysts’ estimates of $28.20 billion, according to IBES data from Refinitiv.

Zuckerberg told the Verge that given the company’s ‘current business growth levels,’ he is ‘now planning to slow the pace of some of our investments,’ including the Metaverse, the company’s virtual world project.

Despite missing the mark on revenue, shares of Meta jumped nearly 17 percent in extended trading after the company reversed the troubling declines in active users that it reported in the prior quarter when it had lost more than 1 million users.

Meta said that it had 1.96 billion daily active users for the quarter, versus the 1.95 billion that Wall Street analysts had expected.

‘We made progress this quarter across a number of key company priorities and we remain confident in the long-term opportunities and growth that our product roadmap will unlock,’ Zuckerberg said in a statement.

‘More people use our services today than ever before, and I’m proud of how our products are serving people around the world,’ he added.

Meta CFO David Wehner said in the earnings release that Russia’s invasion of Ukraine had negatively impacted the company’s sales in the latter half of the first quarter, and said the war would continue to weigh on revenue this year.

Recent privacy changes by Apple have made it harder for companies like Meta to track people for advertising purposes, which also puts pressure on the company’s revenue.

Meta had said that the changes from Apple would cost the Facebook parent company $10 billion in 2022.

Reality Labs, the branch of the company aimed at building products for the Metaverse, lost $2.96 billion in the latest quarter, a rise from the $1.83 billion in the first quarter last year.

For months now, Meta has been warning investors that its revenue can’t continue to grow at the breakneck pace they are accustomed to, so it’s likely that the quarter’s single-digit revenue growth was already baked into investors’ expectations. 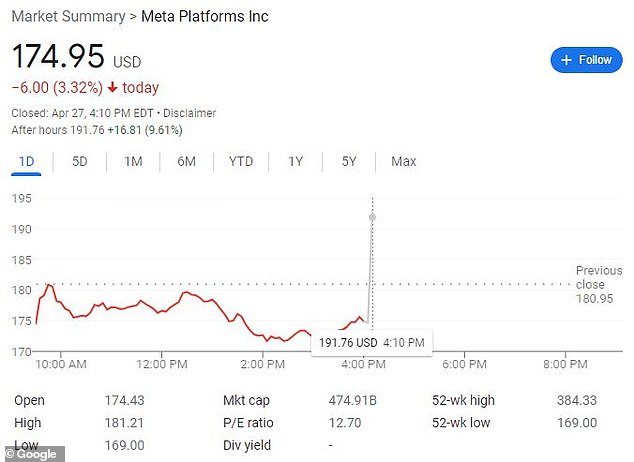 Investors seemed oblivious to the financial results, and sent Meta shares soaring after-hours on the basis of growth in the company’s user base

The turbulence at Meta stands as yet another blow to the tech industry after Alphabet Inc., Google and YouTube’s parent company, reported only $68.01 billion in earnings despite predictions that it would earn $68.11 billion this quarter, up from the $55.31 billion a year ago, according to IBES data from Refinitiv.

The hit to Alphabet represents a 9 percent fall in revenue growth for the company as it authorizes a $70 billion stock buyback to return capital to shareholders.

The company has notably taken a hit through its YouTube ad revenue, which reportedly fell short amid the pandemic recovery as the previous two years saw the platform’s usage skyrocket with millions of people stuck inside their homes, CNBC reported.

Analysts on average had expected revenue of only $49.05 billion, according to Refinitiv IBES data.