The face of a Connecticut farmer thought to be a vampire when he died of tuberculosis in the 19th century has been seen for the first time since his corpse was mutilated and tossed into a grave.

The disease turns people’s skin a pale yellow, their eyes become red and swollen and they sometimes have bloodstains around their mouth from coughing, which was believed to be signs of the undead about 200 years ago.

The man’s skeleton, buried in a casket with ‘JB55’ engraved on it, was used to performed a DNA analysis that was fed to a machine learning system to predict what he may have looked like before being riddled with the disease.

The results showed he had fair skin, brown or hazel eyes, brown or black hair and some freckles.

The man, a farmer who lived in Connecticut, died of tuberculosis in the 19th century, which led people to believe he was a vampire. Researches used DNA from his bones to predict what he may have looked like before he was infected

A study detailing JB55’s DNA analysis in 2019 led to uncovering his true identity.

This research built on the original 1994 discovery, but was able to access the latest technologies to find historical records for ‘John Barber’ and determine he was 55 years old when he died.

The team of American researchers identified JB55 had a chronic lung infection after analyzing his ribs, which was an infectious disease running rampant in the 1800s.

The highly contagious bacterial infection left sufferers pale, gaunt and coughing up blood, according to author and folklorist Michael Bell.

‘The emaciated figure strikes one with terror,’ recounted an 18th-century doctor quoted by Bell in a 2013 essay in the journal Kritikos. ‘The forehead covered with drops of sweat. The cheeks . . . a livid crimson. The eyes sunk. . . . The breath offensive, quick and laborious.’

When JB55 was found in the casket, his remains were in a ‘skull and crossbones’ orientation, which was believed to keep him from rising from the dead.

When JB55 was found in the casket, his remains were in a ‘skull and crossbones’ orientation, which was believed to keep him from rising from the dead 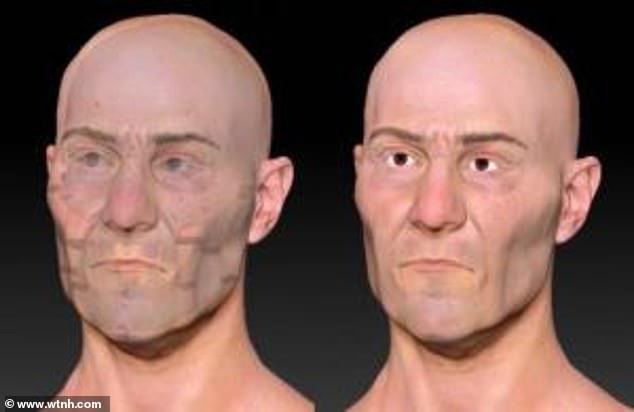 The tale of how this man was deemed a vampire started with the famous Jewett City ‘vampires,’ who were a large family living in the same town of Griswold – Jewett City was a small borough.

The family lost multiple males to tuberculosis over a nine-year time frame and when one of the younger sons became infected, the family was convinced they were plagued by vampires.

The family started disinterring the dead, burning and reburying their remains.

And when the young boy recovered, the surviving family members believed the practice had worked.

‘Such vampire folklore attributed the high number of deaths resulting from disease to vampires rising from the dead and feeding on living relatives,’ reads the 2019 study led by the Armed Forces DNA Identification Laboratory.

‘In attempts to stop the vampire “epidemic”, the body of a diseased individual was often exhumed and examined.

‘The presence of certain characteristics (e.g., blood draining from the mouth and a bloated chest), while now known to be associated with the natural process of decomposition, were mistaken for indications of life.’ 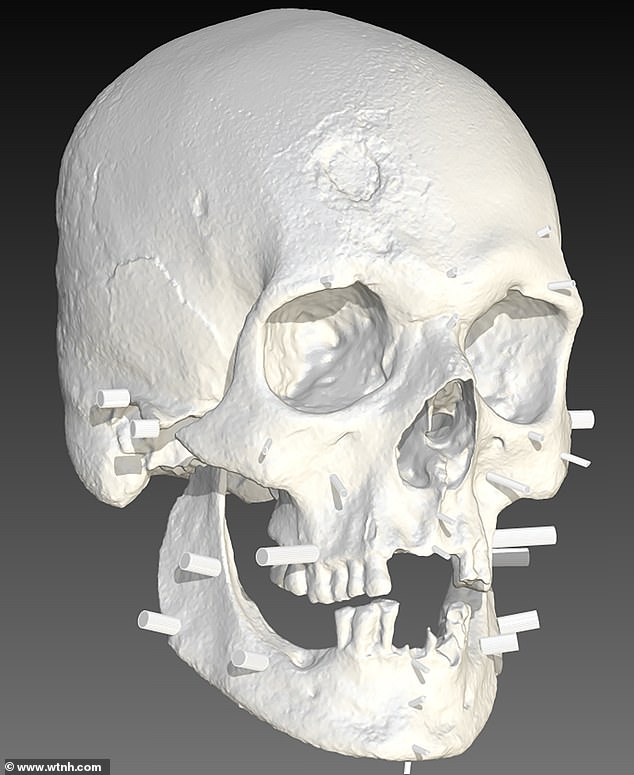 They were able to upload a 3D model of his skull, allowing the machine learning system to predict what he may have looked like 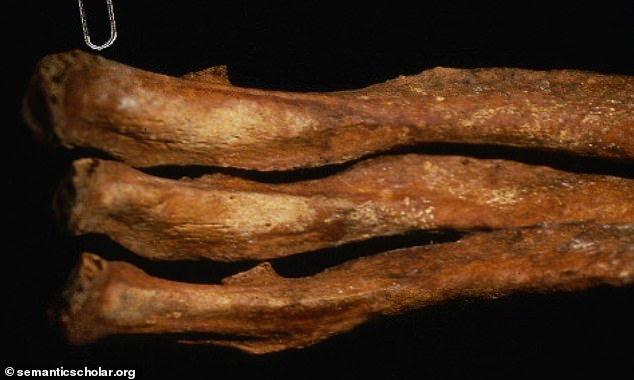 The team of American researchers identified JB55 had a chronic lung infection after analyzing his ribs (pictured), which was an infectious disease running rampant in the 1800s

The DNA used to reconstruct JB55’s face was taken from femoral bone powder, but Parabon NanoLabs, which conducted the facial reconstruction, notes that old remains are sometimes difficult to work with and used three approaches during testing.

This included shotgun sequencing, which breaks up the genome into small DNA fragments that are sequenced individually.

The others were targeting the whole human genome, and targeting ~850,000 custom Single nucleotide polymorphisms, frequently called SNPs, which are the most common type of genetic variation among people.

Once the team was able to create a complete genetic profile, they applied machine learning models to predict what JB55 looked like when he walked the Earth about 200 years ago.