All flights across America have been grounded this morning until at least 9am EST by an FAA systems failure that has left thousands of people stranded at airports..

The problem is with the Notice to Air Missions System, which pilots use to access flight paths and communicate with air traffic controllers about hazards.

So far, 1,200 flights have been delayed by the outage – with more delays expected throughout the day.

The system went down sometime before 6.30am EST on Wednesday and as of 7.30am, it remains unfixed.

The cause of the failure is unclear. President Biden told reporters on Wednesday morning that he had spoken with Transport Secretary Pete Buttigieg and ordered a full investigation.

White House Press Secretary Karine Jean-Pierre tweeted that there was ‘no evidence of a cyberattack at this point’.

Planes can still land safely – and many are – but none are allowed to take off domestically for at least another hour. 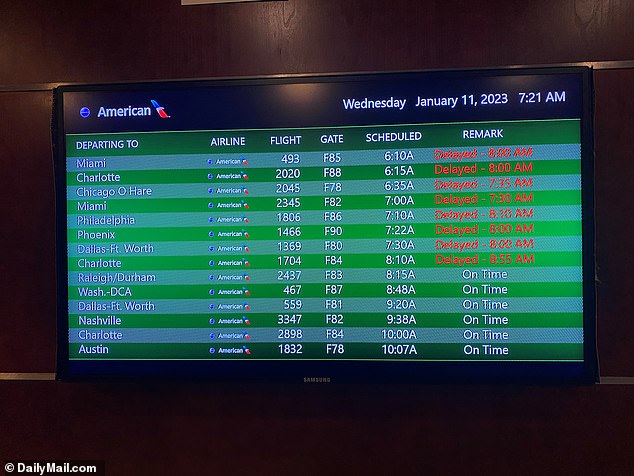 All flights have been grounded until at least 9am EST which will have a knock-on effect on the 45,000 flights the FAA handles every day

In pre-market trading, the shares of Delta, American Airlines and United all dipped slightly.

Transport Secretary Pete Buttigieg said in a tweet that he is in touch with the FAA and working to resolve the issue, but he did not provide any other details.

In the meantime, thousands of people are stranded at airports across the country. Airport lounges quickly filled up as news of the outage spread, while some passengers were told by their airlines to simply ‘go home’.

It is the latest headache for US air travel after a woeful holiday period which saw the collapse of Southwest Airlines which left thousands of people stranded over Christmas and New Year. 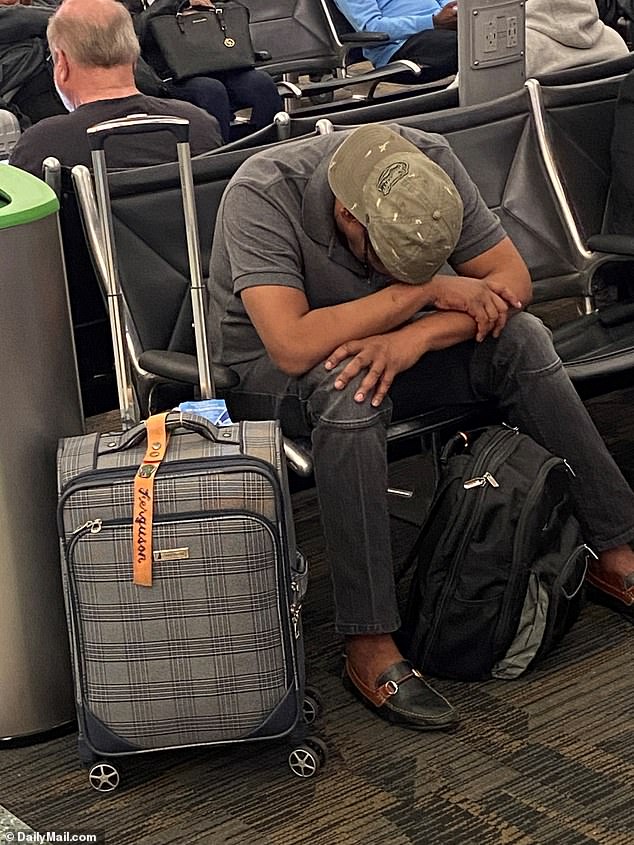 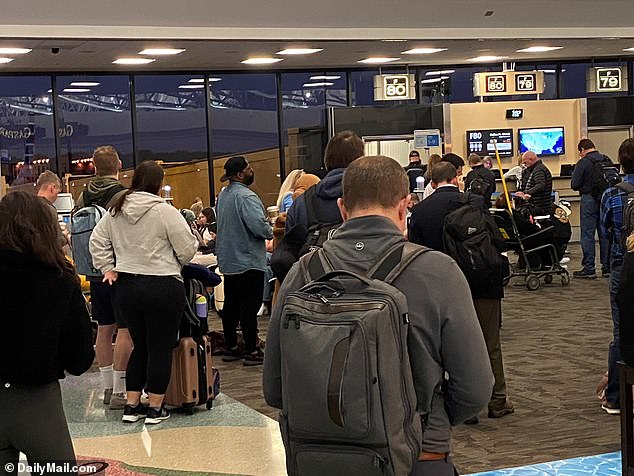 Passengers stranded at Tampa airport in Florida on Wednesday 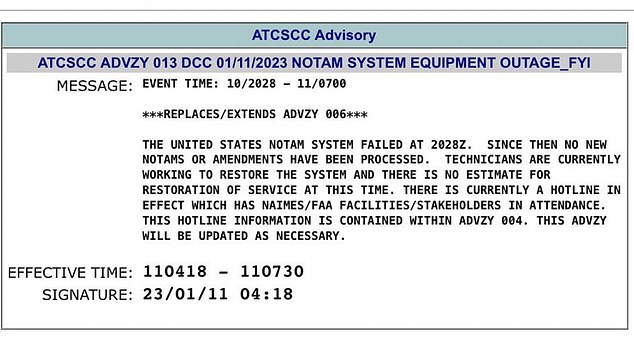 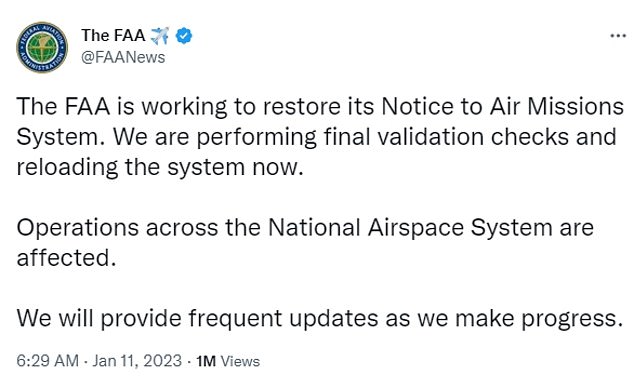 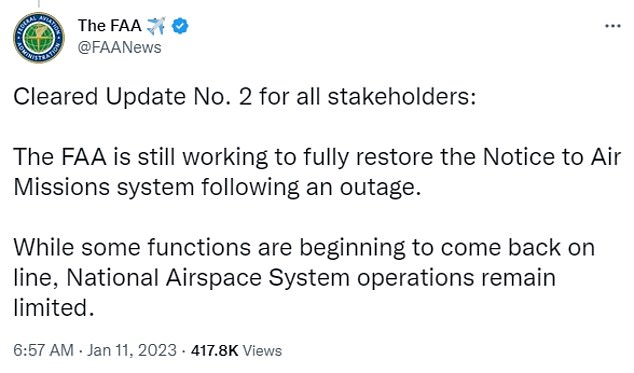 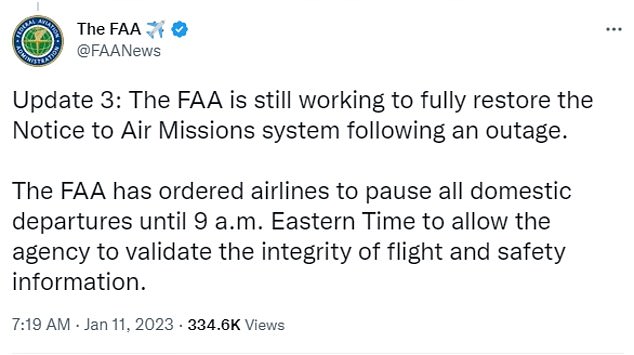 The FAA’s announcement on Wednesday morning

What is the FAA Notice to Air Missions (NOTAM) system?

Wednesday saw thousands of flights across the US grounded by the the Federal Aviation Administration (FAA), due to a failure in the Notice to Air Missions (NOTAMs) system.

In the world of aviation, NOTAM is an unclassified notice that contains vital information for those concerned with flight operations, while not being delivered far enough in advance to be in the public realm through other means.

A NOTAM is filed with a country’s aviation authority – in the case of the US, the FAA – to alert other pilots of any hazards on their route.

The authority then distributes these notices to relevant pilots.

A NOTAM ‘states the abnormal status of a component of the National Airspace System (NAS) – not the normal status,’ the FAA website explains.

Among the hazards flagged by NOTAM include air shows, parachute jumps, rocket launches, as well as changes in operations such as runway closures or airspace restrictions caused by military exercises.

Criticism has ben levelled at NOTAMs which can go up to 200 pages for long-haul international flights.

In 2017, an Air Canada flight nearly crashed into four other airlines as it attempted to land in San Francisco.

The flight misidentified a taxiway as a runway. Information about the adjacent runway being closed was buried in the NOTAM.

In the first mention of the problem this morning, the FAA said in an alert: ‘The FAA is working to restore its Notice to Air Missions System.

‘We are performing final validation checks and repopulating the system now.

‘Operations across the National Airspace System are affected.

‘We will provide frequent updates as we make progress.’

At 7am, the agency said: ‘The FAA is still working to fully restore the Notice to Air Missions system following an outage.

‘While some functions are beginning to come back on line, National Airspace System operations remain limited.’

Shortly before 7.30am, the FAA announced all flights were on hold until 9am.

‘The FAA is still working to fully restore the Notice to Air Missions system following an outage.

‘The FAA has ordered airlines to pause all domestic departures until 9 a.m. Eastern Time to allow the agency to validate the integrity of flight and safety information.’

NOTAM notices contain information essential to personnel concerned with flight operations, but not known far enough in advance to be publicized by other means.

Information can go up to 200 pages for long-haul international flights and may include items such as runway closures, general bird hazard warnings, or low-altitude construction obstacles.

The outage comes after federal officials said on Tuesday that they will require charter airlines, air-tour operators and plane manufacturers to develop detailed systems for identifying potential safety problems before accidents occur.

The Federal Aviation Administration said safety-management systems have made travel on large airlines safer since their adoption was required in 2018.

‘Expanding safety management systems to other players in the aviation industry will reduce accidents and incidents and save lives,’ acting FAA Administrator Billy Nolen said in a statement.

The National Transportation Safety Board, which investigates crashes, has pushed for wider adoption of such systems.

In 2020, Congress directed the FAA to require them for aircraft manufacturers after two fatal crashes involving Boeing 737 Max planes.

The FAA said its proposal Tuesday went further by including smaller passenger-carrying operators. 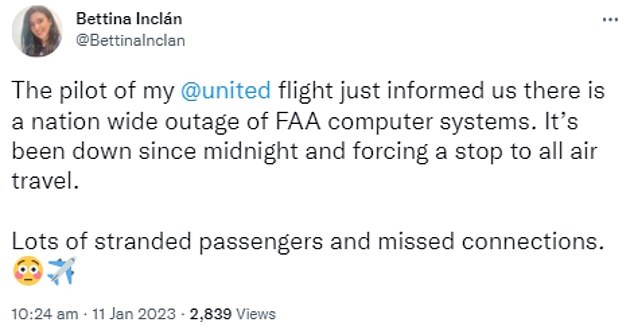 Pictured: A passenger takes to Twitter to give their own updates on her situation, saying she has been receiving updates from the pilot, and that many passengers were either stranded and had missed connecting flights

In justifying expanding the requirement to smaller air operators, the FAA cited incidents including a 2015 crash of a float plane near Ketchikan, Alaska, that killed the pilot and all eight passengers.

The NTSB blamed pilot error and the company’s lack of a formal safety program.

The FAA said Tuesday that if its proposed rule had been in effect, the company would have taken steps that might have prevented the accident, including having a manager responsible for assessing safety risk.

The FAA has an explainer on safety-management systems, which have been a growing trend in aviation in recent years.