Dagenham & Redbridge’s FA Cup tie with Salford City was temporarily suspended due to a medical emergency in the crowd on Monday.

As the hosts pushed for an equaliser in the 88th minute of the game, fans began calling out for medical attention.

The players alerted medical staff to the problem in the stands and referee David Rock halted the game for several minutes.

The medical staff rushed across the pitch to the stands to help the stricken supporter who was eventually stretchered away after suffering a fit, according to ITV commentator Sam Matterface via the Daily Star.

Players were guided towards the tunnel while the fan was being treated by paramedics and medics.

Play resumed shortly after with 10 minutes of stoppage time added on at the end of the 90 minutes. 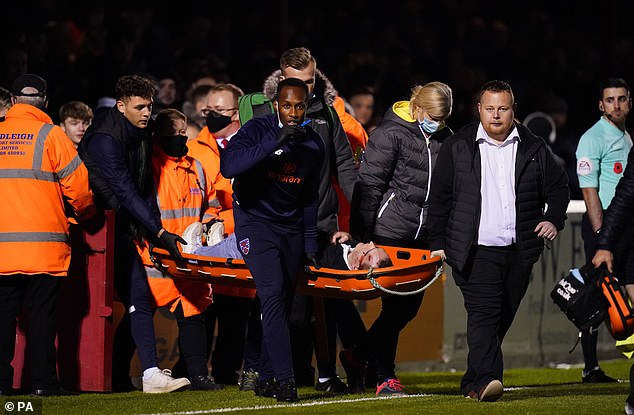 Dagenham posted post-game: ‘The supporter in question is in a stable condition after suffering a fit, and we would once again like to thank the Crowd Doctor and paramedics for their swift response.’

Salford stated via their social media page: ‘Fantastic response from players and staff to get over and provide assistance, our best wishes for a full and speedy recovery to the supporter.’

League Two side Salford, who are owned by Manchester United’s class of ’92, were the favourites heading into the clash and led from the early stages against their National League opponents.

Jordan Turnbull’s 3rd-minute goal was enough to secure Salford the win and they will host Chesterfield in the next round.