The lights briefly went out on Leicester’s first campaign as FA Cup holders but James Maddison shone brightly through the gloom to ensure their defence began with a victory.

A combination of illness, injury and four men at the Africa Cup of Nations left Brendan Rodgers with only eight senior outfield players, with Jamie Vardy, Jonny Evans and Timothy Castagne among a remarkable 17 unavailable for this tie against Watford.

So when the floodlights failed 11 minutes into the second half – just after Harvey Barnes had put Leicester 3-1 up – Rodgers would have had a few dark thoughts. 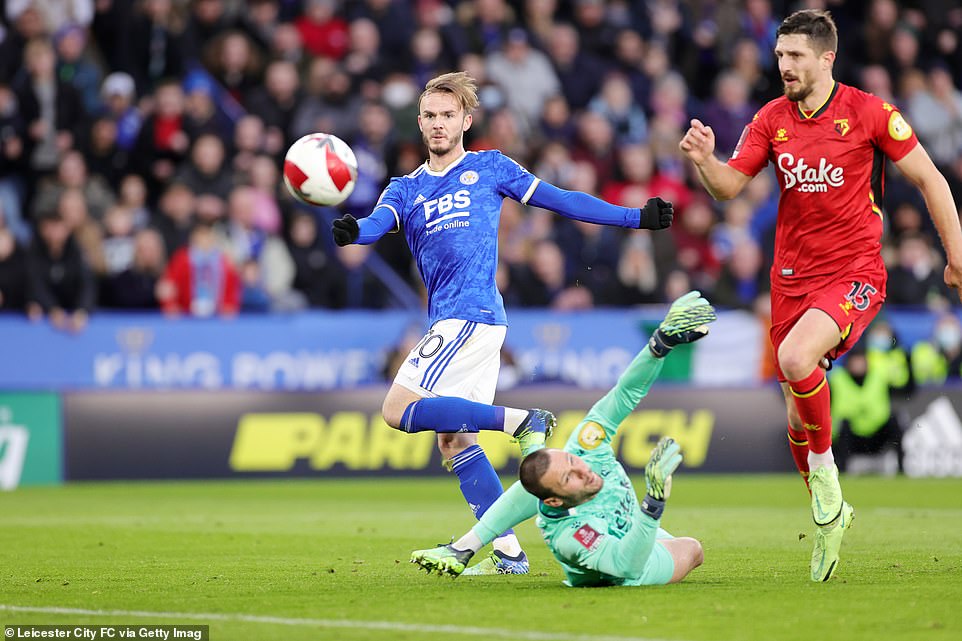 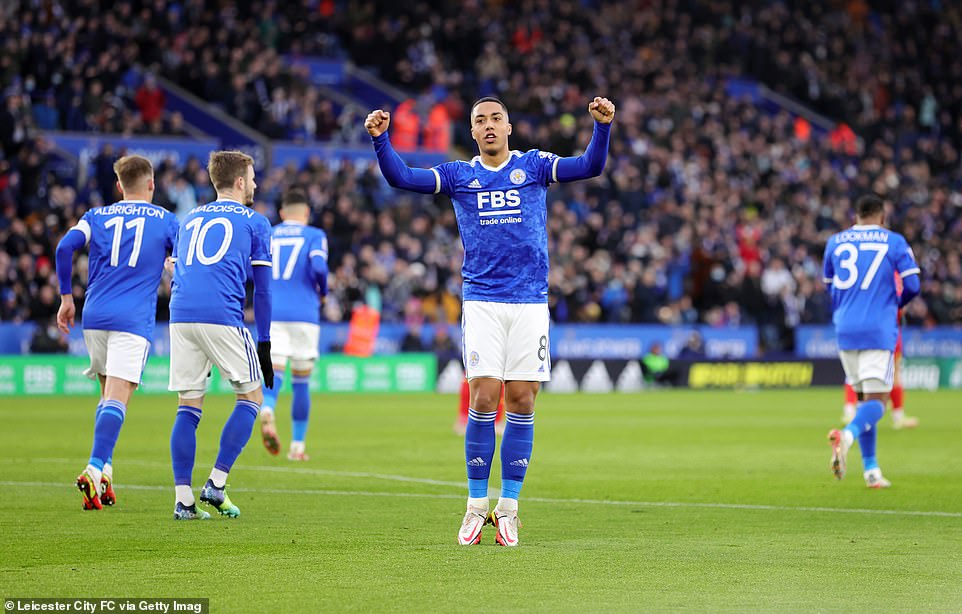 For this game he used a winger at right-back, a midfielder in central defence and a winger up front, as well as giving a senior debut to Lewis Brunt, who began in midfield before moving to left-back.

With Everton awaiting in the Premier League on Tuesday, Rodgers even rested captain Kasper Schmeichel, so the prospect of rescheduling this game because of a few dodgy connections would have taken the biscuit.

Thankfully, the interruption lasted barely five minutes and Leicester are in the hat for round four. They were two up before the half-hour mark thanks to Youri Tielemans’ early penalty and Maddison’s dink, only for Joao Pedro to pull a goal back instantly.

Barnes restored the two-goal cushion early in the second half and after Joao Pedro had hit the underside of the bar with 20 minutes remaining, Watford’s challenge faded and Marc Albrighton hit the fourth late on.

Leicester’s 2016 title-winning manager Claudio Ranieri will be disappointed Watford did not make more of this opportunity though with fixtures against relegation rivals Newcastle, Burnley and Norwich ahead, he would probably have been willing to write this one off.

Because despite Leicester’s troubles, they still had some of their best attacking players available and the outstanding Maddison created the first goal. His sixth-minute corner was aimed towards Jannik Vestergaard, who was dragged down by Francisco Sierralta as he tried to meet it.

Mike Dean pointed the spot and after a VAR check, Tielemans found the bottom-left corner even though Daniel Bachmann went the right way. Tielemans scored the winner as Leicester made history against Chelsea in last year’s Final and he began this competition where had left off.

Leicester should have made it two in the 22nd minute when Maddison took a quick throw-in to Barnes. The winger raced away from Craig Cathcart and sent the ball low across goal, where a natural striker would have been on hand to tap it in. 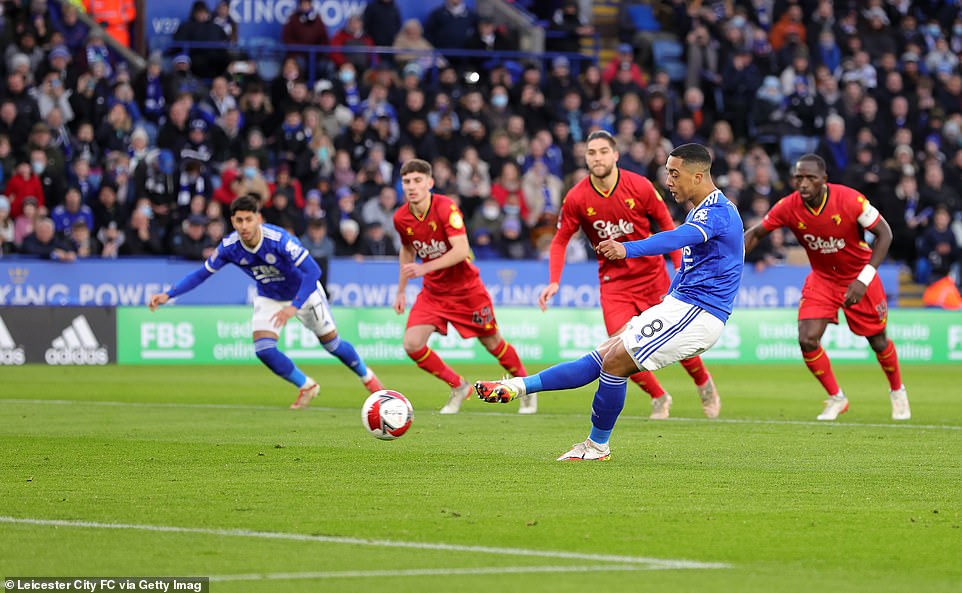 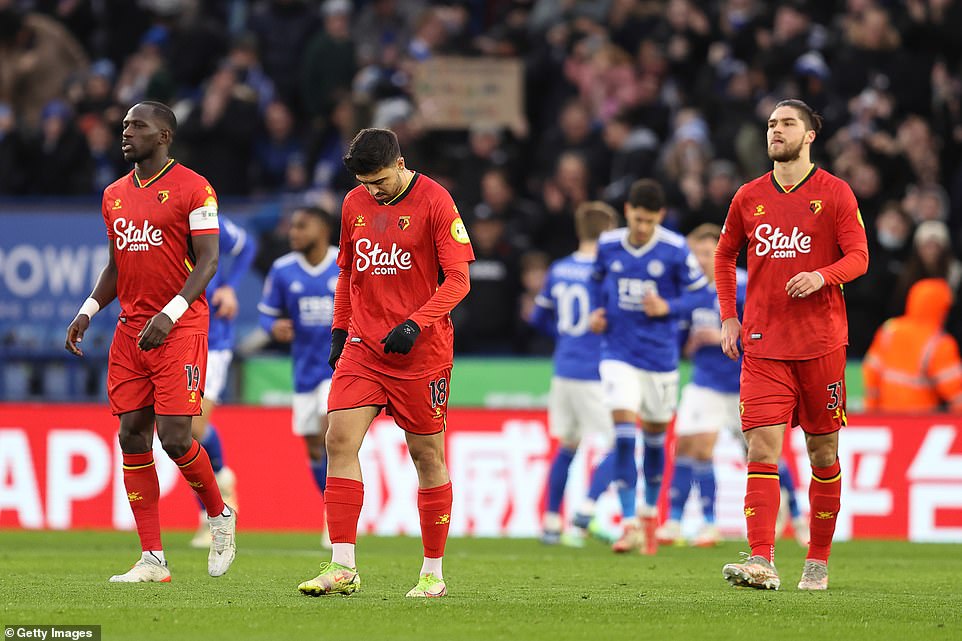 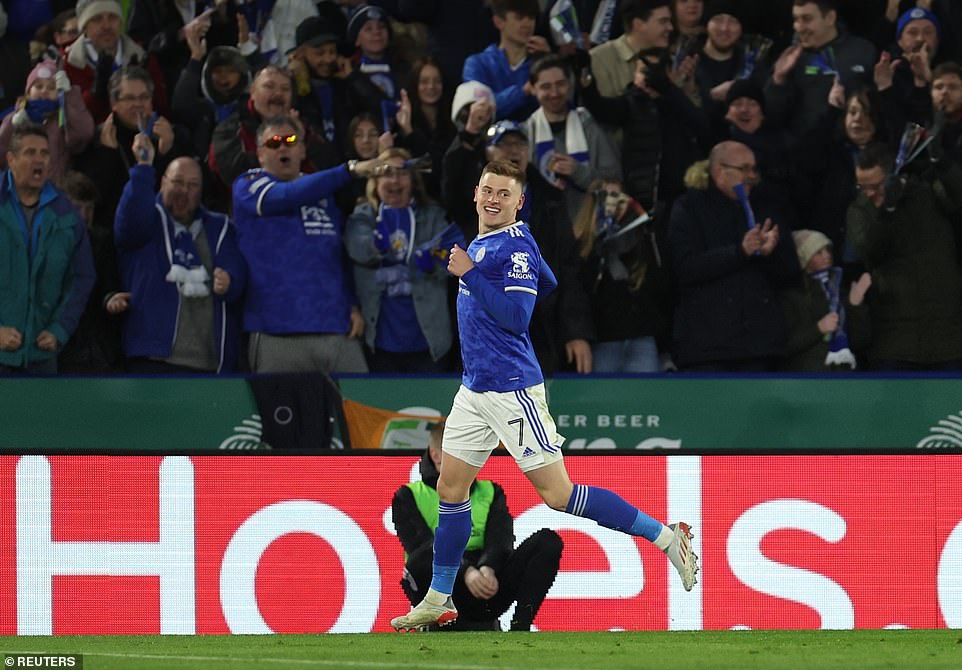 Soon afterwards, the Foxes did double their lead when Maddison finished an excellent move. Albrighton – playing at right-back – found Ademola Lookman and when the ball was transferred to Maddison, he lifted it confidently over the advancing Bachmann.

At that stage Leicester were in total command but they were shocked a minute later when Watford scored with their first effort on target.

Cucho Hernandez and Ashley Fletcher took advantage of some poor Leicester defending, allowing Fletcher to hook the ball through for Joao Pedro, whose finish was as impressive as Maddison’s.

The Hornets were furious with Dean when the referee failed to send off Leicester’s Vontae Daley-Campbell for a body-check on Hernandez. Daley-Campbell had already been booked for a foul on Jeremy Ngakia but insisted he had lost his footing before accidentally bringing down Hernandez, and was given the benefit of the doubt. 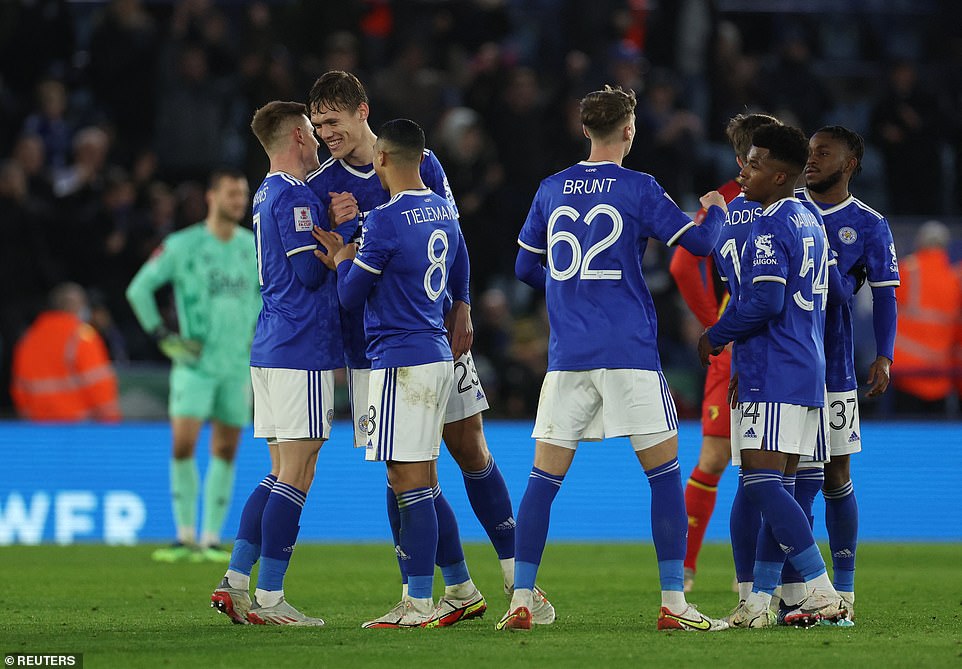 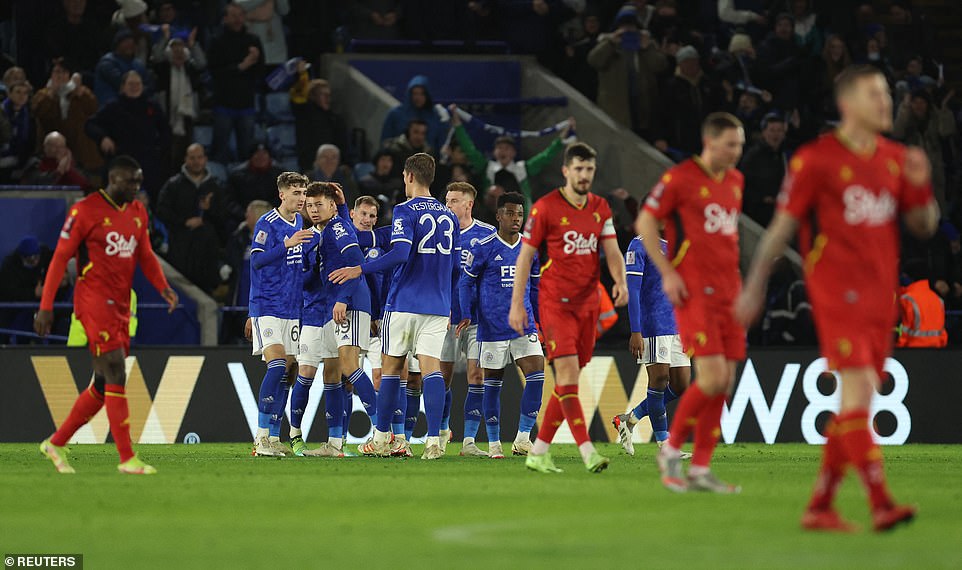 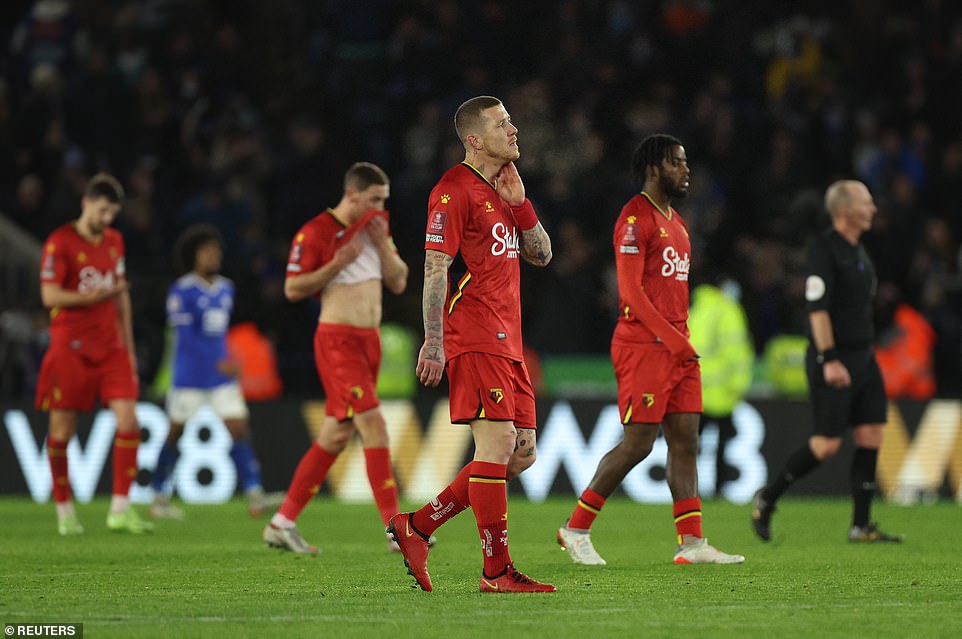 In first-half stoppage time, Ngakia eluded Daley-Campbell again and set up Hernandez for a shot that Hamza Choudhury, a midfielder playing at centre-back, cleared off the line. Predictably, Daley-Campblell did not reappear for the second half.

Maddison could have restored the home side’s two-goal lead instantly only to delay too long after being picked out by Albrighton. At the other end, Ozan Tufan shot over from a good position and Joao Pedro was denied a penalty when he tumbled under pressure from Albrighton and Brunt.

Leicester were looking jittery at this stage as Watford sensed an equaliser. Even when this depleted, though, Rodgers’ men are still hugely dangerous.

Maddison found Lookman with another smart pass and the on-loan RB Leipzig man sent over a fine cross for Barnes to slide the ball beyond Bachmann with ease. The goal was originally chalked off before being overturned when replays showed Barnes clearly onside. 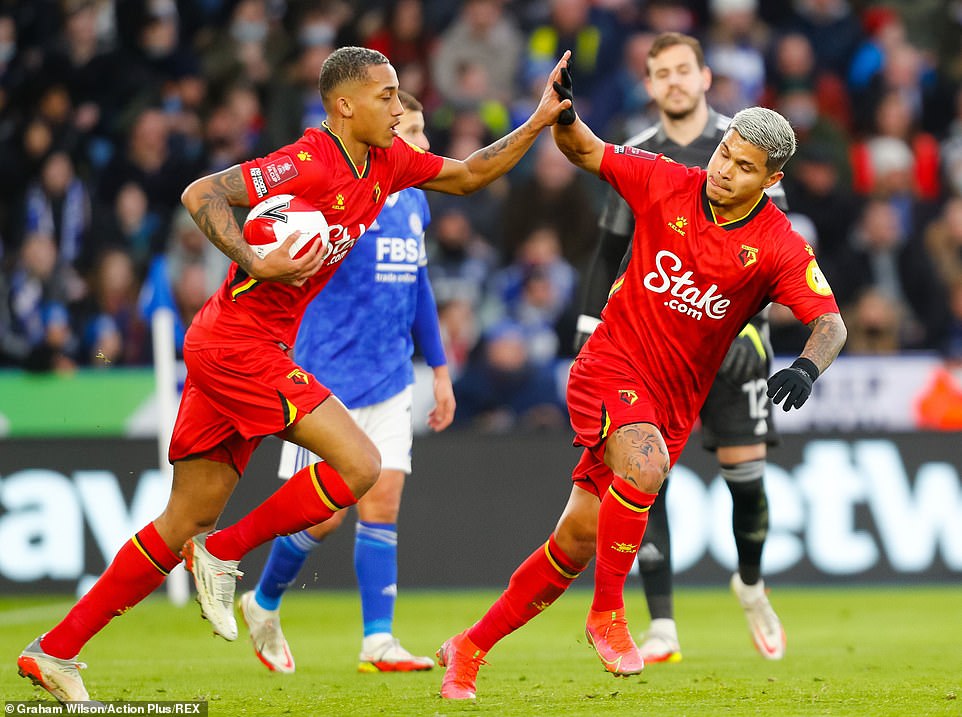 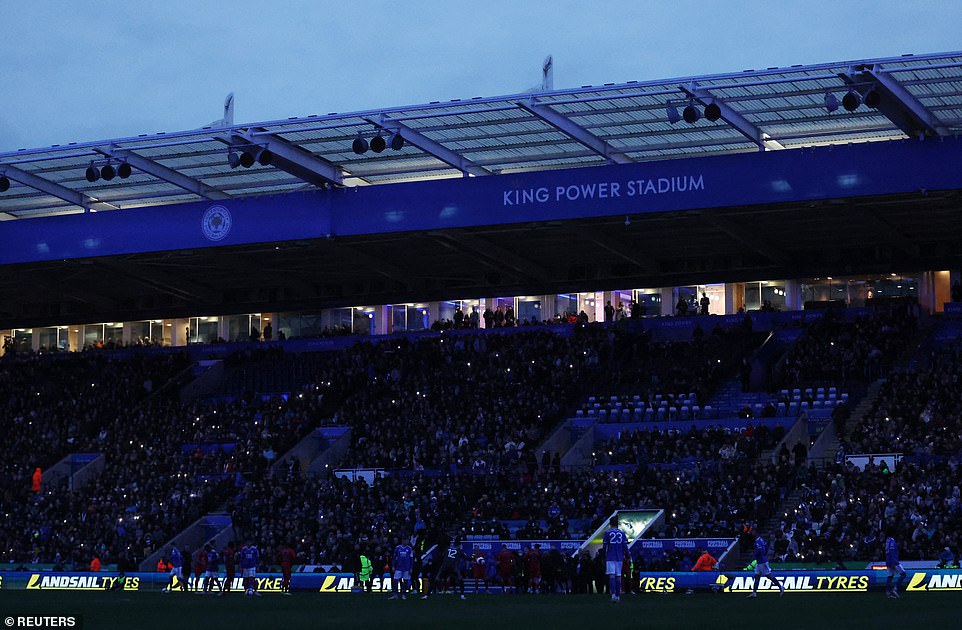 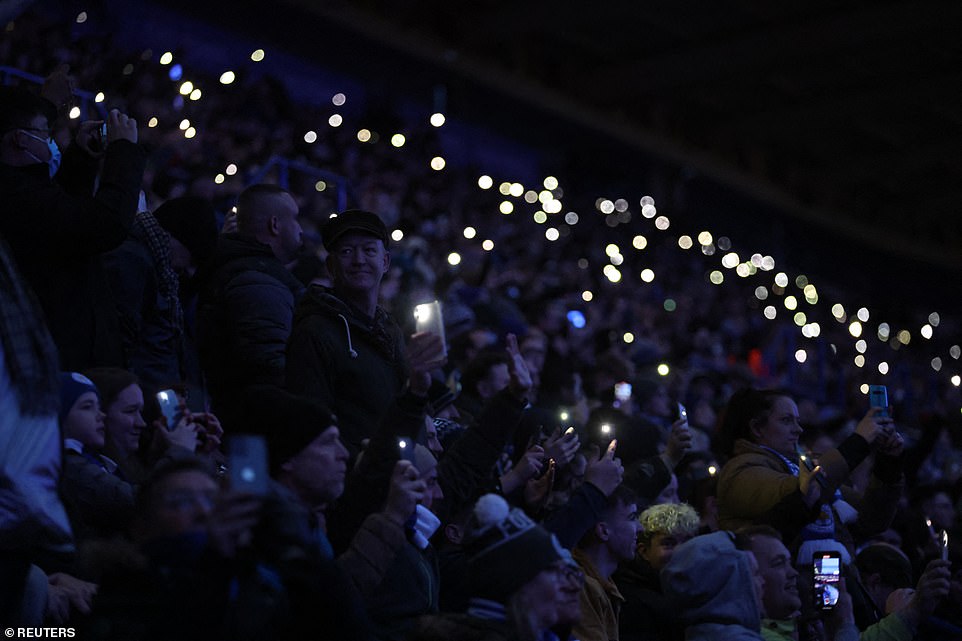 With Ranieri about to make a double substitution, out went the lights. The delay of six minutes was not enough to damage the general good humour, as fans turned on their phone torches and urged their teams to ‘play in the dark’ as a nervy announcer made three separate apologies over the tannoy system.

As the action resumed, Leicester again looked jumpy and Joao Pedro saw a shot from close range cannon off the underside of the bar before Brunt, very impressive on debut, headed clear.

Leicester put the seal on it five minutes from time when Barnes crossed, Maddison dummied, Bachmann saved from Lookman and Albrighton thrashed in the rebound. 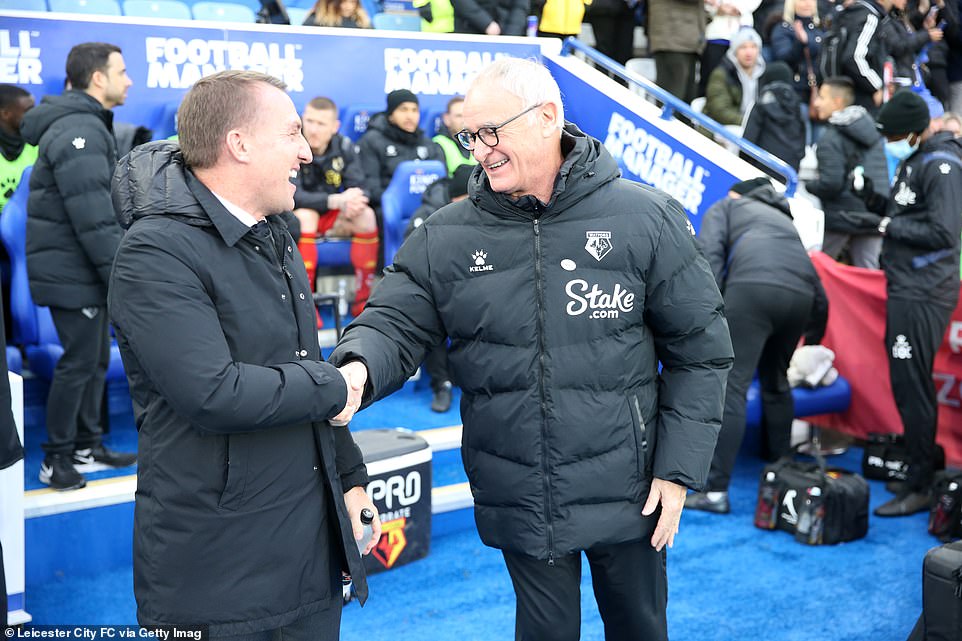 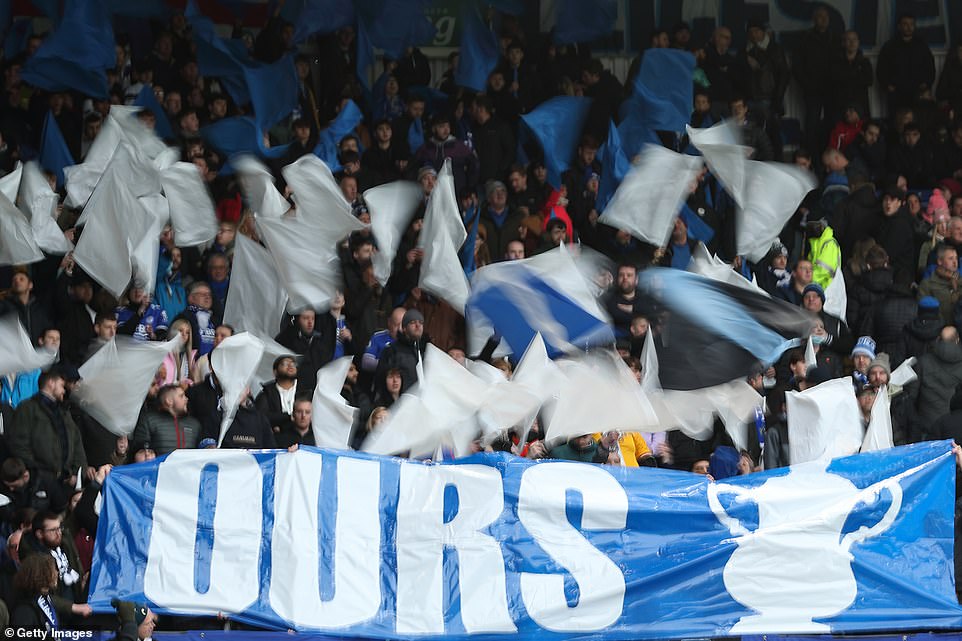