F1 star Alex Albon insists he is on the mend following his appendicitis ordeal and that he is targeting an immediate return to the cockpit.

After taking part in Friday practice last time out at Monza, the Williams star was forced to miss the rest of the Italian Grand Prix weekend after being diagnosed with appendicitis before undergoing laparoscopic surgery.

But the 26-year-old then suffered further medical complications when owing to anaesthetic issues he suffered respiratory failure.

The Thai-British driver was put under mechanical ventilation in a bid to make him better before he was released on Tuesday.

Having now started his recovery, Albon is now hoping to build back up his fitness for the Singapore Grand Prix in two weeks, although he admits the physically tough nature of the circuit means he is still not certain that he will be back behind the Williams car.

Updating his health on social media, Albon said: ‘Hey everyone, Alex here. Just thought I’d give a little bit of an update on how I am.

‘I feel pretty good. I feel okay. Obviously on Saturday, I had a slight issue, and the doctors did an amazing job. Very grateful that they got me in good health and out of the hospital by Tuesday.

‘So I’ve been in Monaco since then, been starting to walk around and the goal is to be ready for Singapore, which is going to be tough.

‘It’s one of the toughest races that we go to, so it’s not an easy one but let’s aim high, and see what happens.

‘Just a quick message to say thank you for the kind messages have been reading them all, as many as I can, and it means a lot. So, thanks. Hopefully see you in Singapore and peace out.’ 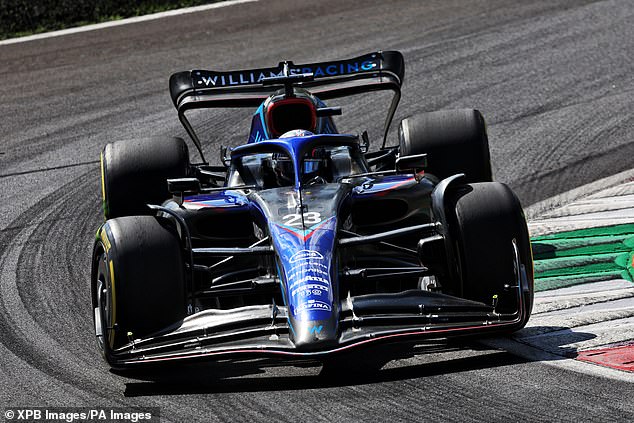 Should Albon not be able to compete at Marina Bay, Williams would likely call upon his Monza replacement Nyck de Vries who impressed on his F1 debut.

Speaking after the race, the Dutch former Formula E world champion said it was a ‘dream come true’ to finally get a chance in F1 and said that he hoped to be a permanent fixture next season.

‘It was a great day for the team and whilst grid penalties played in our favour, ultimately, we did a great race so I’m very happy for everyone in the team and for myself,’ he said.

‘Hopefully I will get a shot next year, but this is definitely a dream come true and I’m very impressed with what we’ve done in short notice, so I’ll go enjoy it now.’