Extreme temperatures fuel online hate speech: Study shows people are more aggressive on Twitter when it’s either too cold or too hot outside

This summer, England experienced its hottest day on record, with parts of the country hitting a whopping 104.5°F (40.3°C).

And a new study suggests that these extreme temperatures don’t just have us reaching for the fan – they also fuel online hate speech.

Researchers from Potsdam Institute for Climate Impact Research found that people are more aggressive online when its either too hot or too cold outside.

The extreme heat was caused by a plume of hot air from north Africa and the Sahara and an ‘Azores High’ subtropical pressure system creeping further north than usual — which experts said was a result of climate change.

In the study, the researchers used machine learning to analyse more than four billion tweets posted in the US from 2014 to 2020.

The analysis revealed that 75 million of the tweets contained hate speech.

Next, the researchers combined the tweets with local weather data to see if there was link.

‘We found that both the absolute number and the share of hate tweets rise outside a climate comfort zone: People tend to show a more aggressive online behaviour when it’s either too cold or too hot outside,’ said Annika Stechemesser, first author of the study.

However, temperatures outside of this window were linked to increases in hate tweets.

In particular, temperatures above 86°F (30°C) were found to increase online hate across all socioeconomic groups.

‘Even in high-income areas where people can afford air condition and other heat mitigation options, we observe an increase in hate speech on extremely hot days,’ explained Anders Levermann, co-author of the study.

‘In other words: There is a limit to what people can take.

‘Thus, there are likely limits of adaptation to extreme temperatures and these are lower than those set by our mere physiological limits.’

Hate speech has been shown to have an impact on the mental health of victims.

‘Being the target of online hate speech is a serious threat to people’s mental health,’ Ms Stechemesser added.

‘The psychological literature tells us that online hate can aggravate mental health conditions especially for young people and marginalized groups.’

The researchers didn’t look at the reason for the findings. 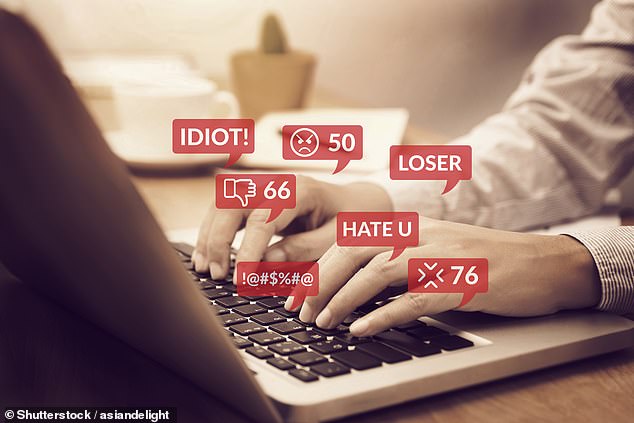 However, previous research has shown that people experience increased frustration and anger in the summer months.

‘Exposure to hot summer temperatures increases your heart rate, which leads to discomfort,’ explained Chad A. Buck, a clinical psychologist at Vanderbilt University, who was not involved in the study.

‘Being uncomfortable can affect how you express yourself and colour the way others interpret your words and actions.’

The findings suggest that climate change could exasperate online hate speech around the world.

Ms Wenz concluded: ‘For centuries, researchers have grappled with the question of how climate conditions affect human behaviour and societal stability.

‘Now, with ongoing climate change, it is more important than ever.

‘So that means that curbing emissions very rapidly and drastically will not only benefit the outer world. Protecting our climate from excessive global warming is also critical to our mental health.’

Life-threatening temperatures above 100F will be up to TEN TIMES more common in Britain by the end of the century, study warns

Life-threatening temperatures above 100°F will be up to 10 times more common in Britain by the end of the century, a new study warns.

Researchers looked at future climate projections to see how global exposure to ‘dangerous environments’ will increase in the coming decades.

More than half the year ‘will be a challenge to work outside’ in countries along the equator because of scorching weather by 2100, although ‘deadly’ heatwaves could happen every year in the mid-latitude countries too.

Record-breaking heatwaves have occurred in multiple places this summer, from the UK to Spain, Delhi in India and the Pacific Northwest in the US.