A massive ‘megapod’ with dozens of humpback whales was spied frolicking in the waters off the Sapphire Coast in New South Wales, Australia.

Humpbacks are fairly solitary creatures, usually only gathering in packs of two to 15, and even then just temporarily.

A tour boat near Bermagui filmed up to 150 whales last week, all dining through a highly synchronized process called bubble-net feeding, when the majestic sea mammals dive deep and blow air bubbles as they rise, confusing the fish above them.

It’s only the second time such a massive congregation has been filmed in Australia—the first was last year around the same time and location.

‘Something is going on that we need to investigate as scientists to learn more about our big beautiful marine environment,’ humpback expert Vanessa Pirotta told the Australian Broadcasting Company.

It’s possible the sperm whale super swarms have formed there two Septembers in a row because the waters have been free of cruise ships and other maritime traffic during the pandemic.

‘Last year was the first time that this was ever documented in Australian waters, and in addition to that, bubble-net feeding behavior was also documented last year,’ Pirotta said.

A massive ‘megapod’ of 150 humpback whales has been spotted near Bermagui in New South Wales, Australia. Typically the creatures stay in small pods of 15 or less.

Simon Miller of Sapphire Coastal Adventures, who witnessed the surreal family picnic, told ABC, ‘The whales work collaboratively together to herd the bait into a really tight-knit ball.’

‘At one stage they started herding it towards the boat, and when it gets to the boat it stops and the whales were lunging into it, so we’re very lucky we could get out there and see it,’ Miller said.

Pirotta said the whales were chowing down in preparation for their migration back to Antarctica.

‘If this is a significant area, maybe they are using Australian waters as an additional feeding ground to Antarctica to help top up that supply,’ she told ABC. 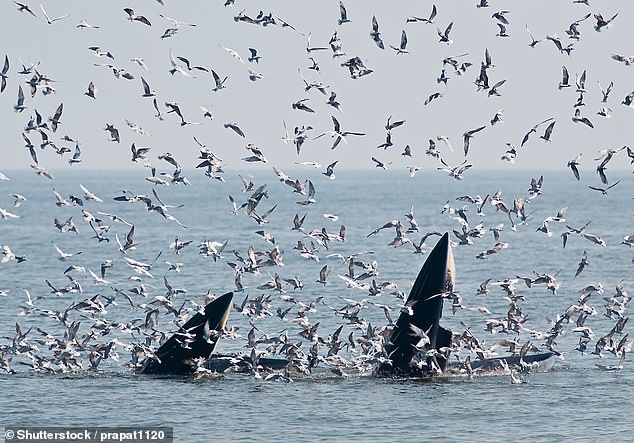 Bubble-net feeding is a synchronized technique involving the whales diving deep and blowing bubbles as they rise, stunning the fish above them

Global slowdowns due to the pandemic have had noticeable affects across the animal kingdom:  Michelle Fournet, an expert in humpback whale communication, reports humpbacks in Alaska’s Glacier Bay changed their vocalization after March 2020, when traffic cruise ships, tour boats, and recreational boaters slowed down.

In summer 2019, about 66 percent of humpback whale calls were what Fournet calls a ‘whup.’

In 2020—when marine traffic was down 44 percent and median noise levels were three times lower than usual—the frequency of the whales’ whups fell to less than 50 percent, according to Hakai magazine.

The rate of whups was similar to recordings made in the 1970s, before Glacier Bay become such a popular tourist destination.

Fournet thinks that for the Glacier Bay humpbacks, whups are ‘a way of announcing their presence’ to give them their own kind of social distancing during feeding. 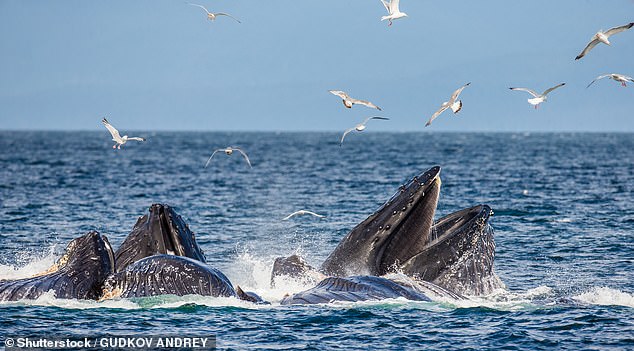 The slowdown of maritime traffic in Alaska’s Glacier Bay has seen a shift in humpback whale communication, experts say. The whales have been making less ‘whup’ noises to announce their presence since the pandemic started 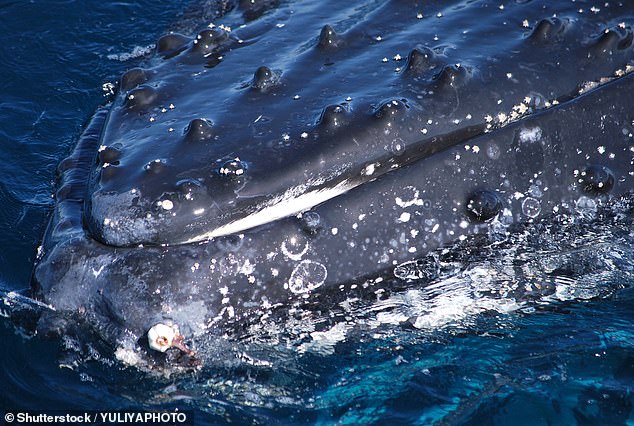 ‘If that interpretation is correct, the prevalence of whups in non-pandemic times suggests that cruise ship noise may be affecting humpbacks’ table manners,’ Amorina Kingdon writes in Hakai.

Traffic has slowed down considerably on the Sapphire Coast as well during the pandemic, though Miller has continued to take his boat out on the water without passengers, ABC reported.

Humpback super-pods were starting to be reported elsewhere before the pandemic—including a 200-whale gathering off the coast of South Africa in 2017—so it’s possible their formation isn’t related to lockdowns.

The sightings have all been in within the last decade or so, coinciding with an increase in the humpback population.

Before a 1966 moratorium, the species was hunted to near extinction, with 90 percent of humpbacks killed. 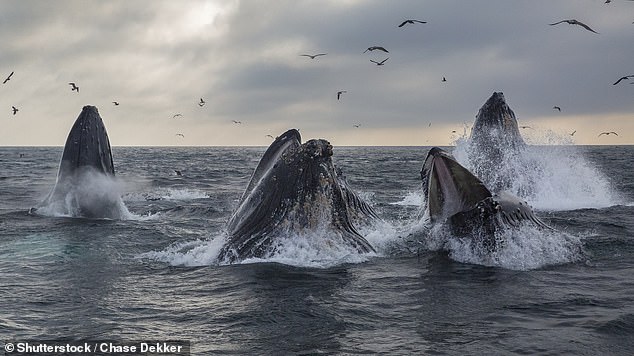 Sperm-whale super swarms may have formed in New South Wales two Septembers in a row because cruise ships and other maritime traffic has been missing during the pandemic.  It’s also possible they’re simply exhibiting typical behavior that stopped when the whales were hunted nearly to extinction. Pictured: A pod of humpback whales lunge feed in Monterey Bay, California

Their numbers continued to increase after they were made a protected species in 1996, with an estimated 80,000 animals worldwide.

‘Maybe humpbacks were always this social, and there just weren’t enough of them for us to notice,’ Sara Chodosh wrote in Popular Science.

‘We might be seeing behaviors that were there before whaling now reemerging,’ she told ABC.