Six Extinction Rebellion protesters have been let off with conditional discharges and small fines after blockading a national newspaper printing press in a demonstration that cost publishers more than £1million.

The activists stopped 3.5million newspapers reaching readers when they used bamboo structures to block trucks from leaving the Newsprinters printing works in Broxbourne, Hertfordshire, on September 4.

The demonstrators were convicted of obstructing the highway, with Judge Sally Fudge adding that while the demonstration was ‘peaceful’ it had a significant impact on the ability of businesses to function.

All six defendants, apart from Frandsen, were given a conditional discharge for 12 months and ordered to pay £150 to the court and a £22 surcharge.

Frandsen, who has two previous convictions for similar offences, was ordered to pay a financial penalty of £150, and to pay the court £150 with a surcharge of £34.

The court heard around 50 XR members used vehicles and bamboo structures, used as lock-ons, to deny access to or from the Broxbourne site.

The protest lasted 14 hours and those involved were targeting certain parts of the print media who, according to the defendants, ‘failed to accurately report on the climate crisis and are guilty of corruption’.

Today’s convictions weren’t the first for the printworks protest, with several other activists being let off with conditional discharges or small fines.

The second defendant, Will Farbrother, 39, of Walthamstow, also pleaded guilty.

McAree, who earns £41,000 a year as a project manager, was fined £500 for the Broxbourne obstruction, plus £105 costs, £50 victim surcharge and £150 for breaching the conditional discharge.

Farbrother, who is giving up his £39,000 a year job as a civil servant to work with refugees in Athens, was of previous good character. He was given a six-month condition discharge and was ordered to pay £105 costs and a £22 victim surcharge.

The Newsprinters presses publish the Rupert Murdoch-owned News Corp’s titles including the Sun, Times, Sun On Sunday and Sunday Times, as well as the Daily Telegraph and Sunday Telegraph, the Daily Mail and Mail On Sunday, and the London Evening Standard.

Six defendants are currently being tried at a time in the case.

Today’s verdict was expected last month but Ms Fudge agreed to postpone the trial to await the outcome of a Supreme Court judgment, which on June 25 overturned the convictions of four protesters who had locked themselves together outside an arms fair in 2017.

The four demonstrators were found to have been exercising their rights to free speech and assembly and had a lawful excuse. 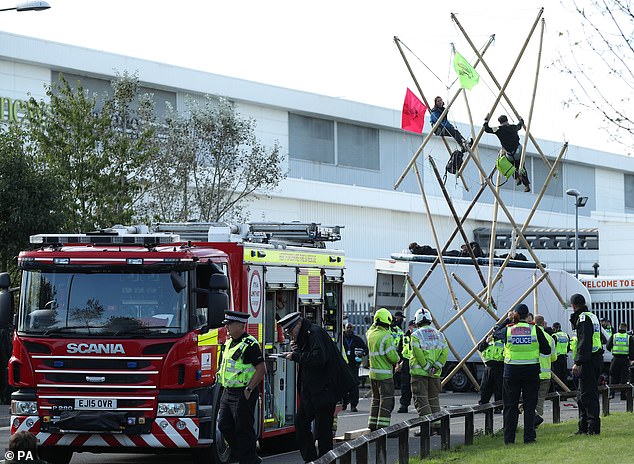 The court heard around 50 XR members used vehicles and bamboo structures, used as lock-ons, to deny access to or from the Broxbourne site

Judge Fudge concluded that the police had acted proportionately in arresting the protesters, adding: ‘The level of disruption caused by the protest was high, and the obstruction of the highway went on for a very long time.

‘It is accepted that the impact of their protest would have been lessened had they been located to the side of the highway, such that the deliveries could continue to take place as normal, but the view of Superintendent Wells, who made the decision to arrest, was that by the time he arrived, the protest had been ongoing for around four-and-a-half hours.

‘In my view the protestors had, up until the point of arrest, been able to exercise their article 10 and 11 rights with little, if any, interference from the state, and that part of the protest had already had some impact on Newsprinters’ ability to conduct its business in the usual way. 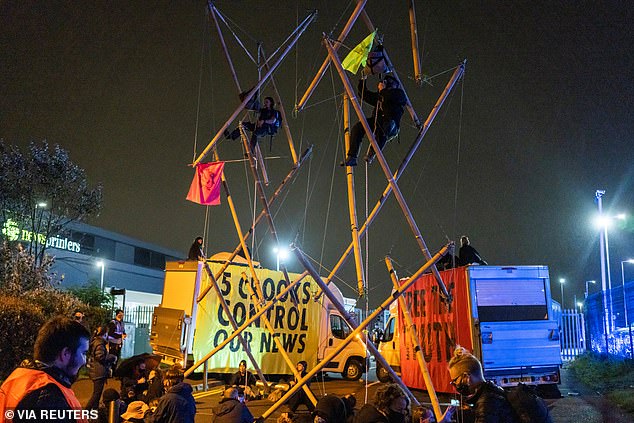 The protest lasted 14 hours and those involved were targeting certain parts of the print media who, according to the defendants, ‘failed to accurately report on the climate crisis and are guilty of corruption’

The judge said this led to a ‘loss of business revenue valued at over £1 million’, adding: ‘It had an impact akin to a ripple-effect, with the distributors of the newspapers at the heart who bore the brunt of the disruption, through to the individual consumer at the outside who could not buy their preferred newspaper that day experiencing some inconvenience.’

During the trial, the court heard how Home Secretary Priti Patel made multiple calls to commanding officers about the protest and requested to ‘expedite’ their removal.

However, Judge Fudge said she found police had ‘maintained their operational independence’ and that Ms Patel’s conversations with senior officers had not influenced decisions taken on the ground. 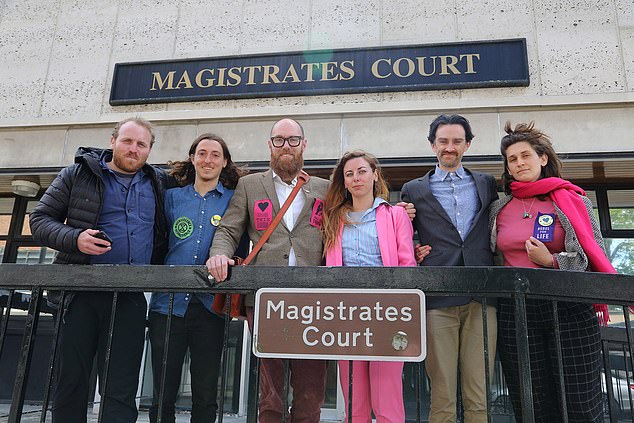 Sentencing the defendants, Ms Fudge said: ‘This was a peaceful protest with no suggestion of damage caused by anybody and no abuse or obstruction of officers. You all spoke in your defence with passion and clarity and it was obvious that you had thought carefully about what you were doing.’

Extinction Rebellion said it is considering an appeal against the convictions.

In a statement after the hearing, an XR spokesperson said: ‘We are astonished that Judge Fudge ruled there was no political interference in the police operation, despite overwhelming evidence.

‘As floods devastate Europe, another heat dome is building in the United States, and environmental defenders across the world are being silenced, XR will continue to demand that the press tell the truth about the climate and ecological emergency.’

Previously Liam Norton, 36, of Esplanade Gardens, Scarborough; Sally Davidson, 33, of Byards Croft, Streatham, south London; and James Ozden, 35, of The Avenue, London, were each given a 12-month conditional discharge and ordered to pay prosecution costs of £150 and a statutory victim surcharge of £22.

Eleanor Bujak, 28, of Bracey Street, Finsbury Park, London and Morgan Trowland, 38, Massie Road, Hackney, east London, were both fined £150 and told to pay costs of £150, plus a victim surcharge of £34.

Timothy Speers, of Rosswyld Lodge, Waltham Forest was fined £200 and ordered to pay £150 prosecution costs and a victim surcharge of £34.