A group of Extinction Rebellion activists launched their new political party in London today by shoplifting from a supermarket ‘because poverty sucks’.

Five members of the new Beyond Politics party walked out of a Sainsbury’s store in Camden with trolleys laden with food.

They claimed it was an attempt to highlight the instability of food distribution and supplies globally.

The group were not stopped by staff, though two activists did clash with security guards.

They had earlier used a loudspeaker to proclaim that they were giving away free food.

The ‘supermarket sweep’ is the first in a series of stunts that will end with an event in central London on July 25.

Beyond Politics has chosen shocking pink as their launch colour.

Discussing the stunt, party member Benedict McGorty said: ‘I’m not stealing food, I’m ‘gift-aiding’ it. We are changing the rules because the rules are plain wrong. This is not against Sainsbury’s but the profiteering of a basic human need.’

The group believe that the climate emergency and political failures have led to dwindling global food supplies.

A spokesperson for the new party said: ‘While the government gives billions to its corporate buddies, millions of families don’t have enough money just to feed their kids.

‘We want to establish a participatory democracy. We want to engage everyone and for people to be able to have their say. The current political system is incapable of making the structural changes necessary. We need a complete transformation of politics.’

Beyond Politics’ founders say that the current political system is corrupt and failing.

They want to hand power to ordinary people through citizens’ assemblies, and plan to field candidates across the country for future local, regional and national election. 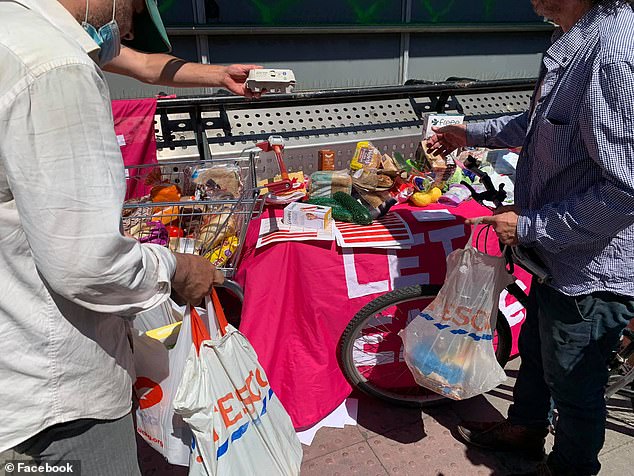 To start with, north London activist Valerie Brown will stand for mayor of London at next year’s election.

Extinction Rebellion’s co-founder Roger Hallam is a driving force behind the party.

He told the Guardian: ‘We are seeing complete incompetence of the governing class. There have been 20,000 unnecessary deaths from Covid. The crowning glory is the inability of the political class to respond to the extinction of the human race.’

Hallam says he is assisting with design and organisational work for the new political party and insists that it is separate from the Extinction Rebellion movement.