He has conquered the tallest mountain in the world.

But despite scaling Everest, Sir Ranulph Fiennes has said he makes his wife clear the gutters at home because he is too scared to go up a ladder.

The 76-year-old explorer said his vertigo means he holds the ladder while horse trainer Louise climbs it.

He told Somerset Life magazine: ‘My wife, Louise, is probably more heroic than I will ever be.

‘Despite climbing Everest, I have a fear of heights and so I hold the ladder while Louise climbs up and gets the leaves out of our gutters.’

The Old Etonian, who has also climbed the north face of the Eiger, lives on Exmoor with second wife Miss Millington, who is 24 years his junior, and their daughter Elizabeth, 14.

Sir Ranulph, who grew up in Africa, became the youngest captain in the British Army before embarking on his exploratory career.

Following his career in the Army, he undertook a string of daring expeditions.

In 2003 he completed seven marathons in seven days on seven different continents, despite having a double heart bypass operation just four months before.

He was named the world’s greatest living explorer by the Guinness Book of World Records in 2004. 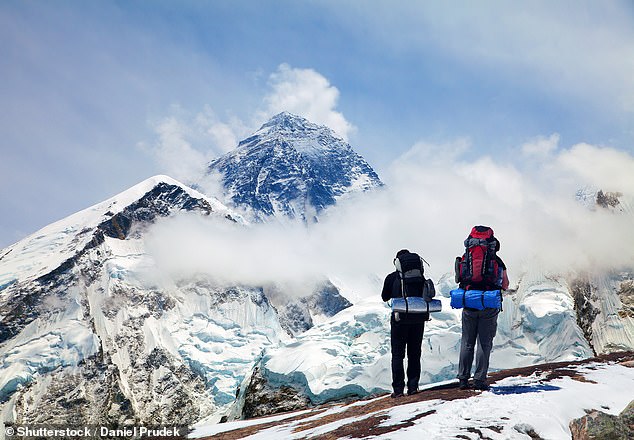 Reflecting on his career, Sir Ranulph said: ‘I have always had a spirit of adventure and it has got me into trouble but it has also helped me to go places and see things that I might never have experienced.

‘I believe in encouraging that spirit of adventure in others.’

Last year he revealed that he opts to sleep in his old Ford Mondeo while in London rather than pay for a hotel.

‘The car is long enough for me to stretch out. It’s not uncomfortable or anything. In London I park in a residential bay between 10pm and 8am,’ he said.

‘You save £300 for the nearest hotel or B&B. Normally, I’m parked between Ferraris and Range Rovers. I think they’re all oligarchs and abroad and that’s why there are spare spaces.

‘I’ll tell you that it’s in Queen’s Gate [in west London] but I won’t tell you more because it may not be strictly legal.’

Sir Ranulph’s first wife Ginny died in 2004 after a battle with stomach cancer.