EXPRESS INFORMER > Science & Technology > Explained: What is causing the storms in California?

A state of emergency has been called in California following more than 10 days of storms across the state, claiming the lives of at least 14 people.

For more than a week now, the state has been facing the brunt of two overlapping weather systems – atmospheric rivers and bomb cyclones, causing an extreme weather phenomena.

What is an atmospheric river?

The torrential downpours are being spurred on by an atmospheric river – an airborne band of moisture that can stretch 1,000 miles long and 350 miles wide.

The torrential downpours are being spurred on by an atmospheric river – an airborne band of moisture that can stretch 1,000 miles long and 350 miles wide

On average an atmospheric river will carry the same amount of water vapor equivalent to the average flow of water at the mouth of the Mississippi River, according to the National Oceanic and Atmospheric Administration.

The weather system is caused by moisture in the ocean. It can move for thousands of miles before its downpour, which can result in severe flooding or landslides.

This particular river is an example of the Pineapple express – the result of moisture from near Hawaii, formed after warm water evaporated off the Pacific, before it moved to the West Coast. Once in the air, the river is carried by the wind over mountains before falling as rain or snow. 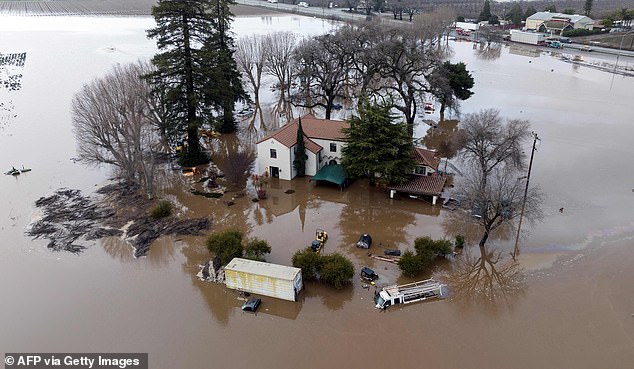 On Sunday, the National Weather Service warned of a ‘relentless parade of atmospheric rivers’.

It is the third atmospheric river to hit the state since December 26.

In California, only 17 per cent of storms on the state’s West Coast are caused by atmospheric rivers, however, they contribute to between 30 and 50 per cent of the areas precipitation.

What are bomb cyclones?

They are caused by a mixture of high and low temperatures, causing a rise and fall in air pressure, resulting in harsh storms and strong winds.

It is called a bomb cyclone as meteorologists have likened the sudden drop in pressure to a bomb going off.

Other terms to describe it include ‘explosive cyclogenesis’ and ‘bombogenesis’.

How common are atmospheric rivers?

Atmospheric rivers regularly occur across the United States during the winter months, and account for 50 per cent of all rain and snow in the West of the country.

However, when there are a number of atmospheric rivers in a row, as California is experiencing now, it leaves the area more susceptible to flooding and landslides.

While the weather system is more common on the West Coast of the US, they are seen around other parts of the world.

In 2009, an atmospheric river hit the northwest of the UK, carrying about 4,500 times the amount of water in the River Thames in London, according to a study by the University of Reading and University of Iowa.

Further research has also predicted that climate change will cause atmospheric rivers to become 25 per cent longer and wider, hence carrying more water. 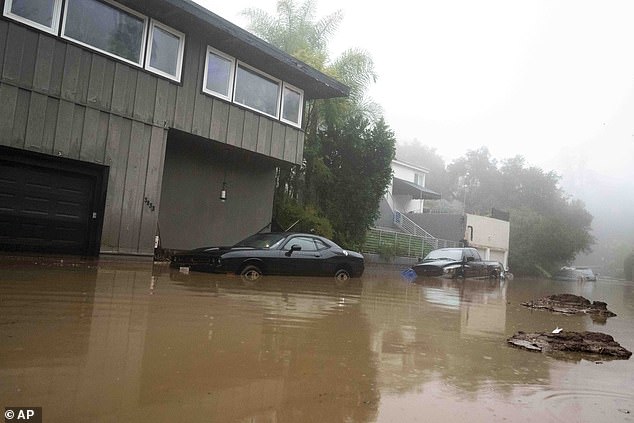 Atmospheric rivers regularly occur across the United States during the winter months, and account for 50 per cent of all rain and snow in the West of the country. Pictured: A mudslide flooded parts of Studio City, California

Why is this atmospheric river so bad?

Atmospheric rivers are among the most damaging of storms, according to the Earth Observatory at NASA, as they produce extremely strong and hazardous winds.

Duane Waliser at NASA’s Jet Propulsion lab studied the most destructive windstorms over the last two decades and found that atmospheric rivers were associated with half of these storms.

This atmospheric river weather system is particularly dangerous as it is coinciding with bomb cyclones on the West Coast, with the pressure from the bomb cyclone essentially pulling the river in.

The United States Geological Survey said that atmospheric rivers have the potential to be as destructive as hurricanes.

As with hurricanes, atmospheric rivers have a rating system, which shows whether the storm is primarily beneficial, primarily hazardous or a combination of both.

The current storm heading to California, according to Chief Meteorologist Paul Heggen at CBS, is rated at a Category 3 – both hazardous and beneficial. 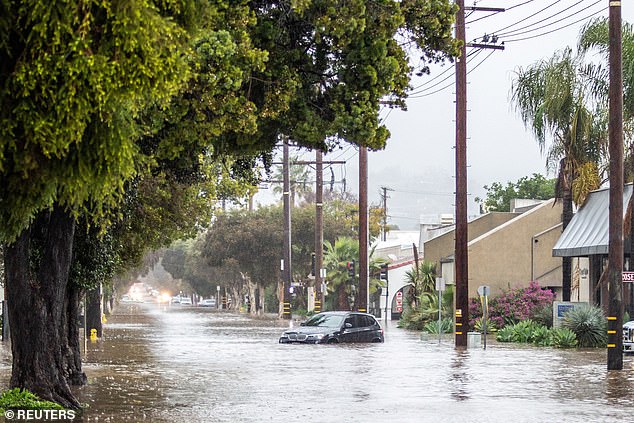 The National Weather Service said nearly all of California has seen huge downpours in the past several weeks, totaling between 400 and 600 per cent above average Pictured: An abandoned car under water in east Santa Barbara, California

How much rain has fallen in California so far?

The National Weather Service said nearly all of California has seen huge downpours in the past several weeks, totaling between 400 and 600 per cent above average.

It reported that in the last 24 hours, 14 inches (35.5cm) of rain had been dumped in the region, with up to seven inches (18cm) expected to be dumped in the next few days.

‘By later tonight, the storm system will push rapidly inland, bringing widespread mountain snows across the Great Basin as the heavy precipitation across California begins to wind down.’

It added that another cyclone is also forming off the coast of the continent and will bring another atmospheric river to the state tomorrow, with precipitation totals ranging from three to seven inches of rainfall across the state.

A silver lining, however, is that the increased rainwater has brought improved drought levels in the area.

Rainfall throughout the day was expected to be ‘heavy to excessive’ across the state, especially in southern California, as winds gusts were clocked at more than 40 miles an hour in many places, the National Weather Service said.

The high winds wreaked havoc on the power grid, knocking out electricity to tens of thousands of Californians. As many as 220,000 homes and businesses were without electricity on Tuesday morning, according to data from Poweroutage.us.

Officials said that 14 people have been killed in the storms so far, while a five-year-old boy who was swept away by floodwaters remained missing. He has not yet been declared dead by the local authorities. 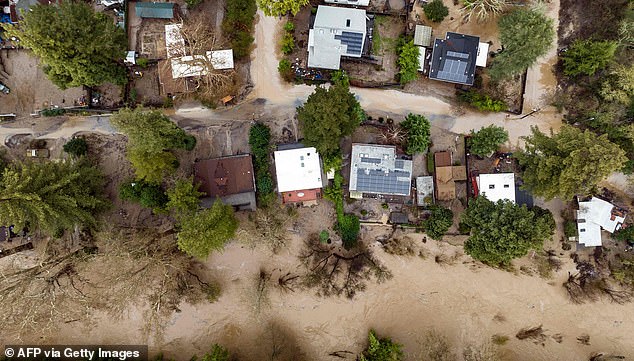 An aerial view of flooded homes in Felton, California on January 9, 2023 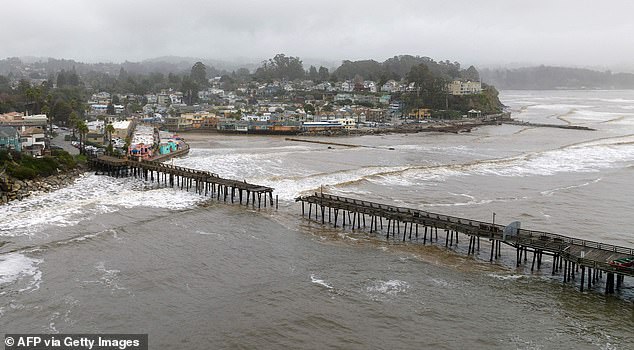 This aerial view shows a damaged pier is split in Capitola, California, on January 9, 2023 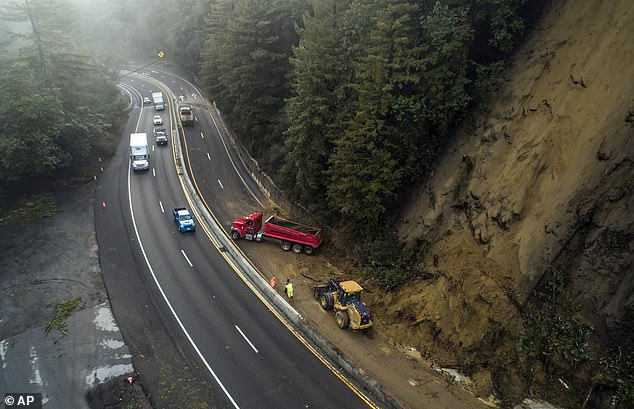 Caltrans crews work to clear a mudslide on Highway 17 that resulted from heavy rain from an atmospheric river storm in the Santa Cruz Mountains, south of Glenwood Drive in Scott’s Valley, Calif., on Monday, Jan. 9, 2023

The treacherous weather, expected to dump as much as 7 inches of rain in some parts by Wednesday, could produce widespread flooding, rapid water rises, mudslides and landslides, especially in areas where the ground has been saturated from previous heavy rainfall, the service warned.

The weather service’s forecast comes after the evacuation of some 25,000 people, including the entire picturesque town Montecito, an affluent coastal enclave 90 miles northwest of Los Angeles, and nearby areas of the Santa Barbara coast, due to heightened flood and mudslide risks.

The Montecito evacuation zone was among 17 California regions where authorities worry the ongoing torrential downpours could unleash lethal cascades of mud, boulders and other debris in hillsides stripped bare of vegetation by past wildfires.

The torrential rains, along with heavy snow in mountain areas, are the product of yet another ‘atmospheric river’ of dense moisture funneled into California from the tropical Pacific, powered by sprawling low-pressure systems churning offshore.

At least a dozen fatalities have been attributed to several back-to-back storms that have lashed California since Dec. 26, including a toddler killed when a redwood tree was blown over his family’s trailer home last week.