Telehealth offering medication to help Americans lose weight are described by experts as predatory because they take large sums of money from desperate customers – only to prescribe them prescription pills and provide little long-term support.

Dozens of online weight loss clinics have opened in recent years in response to both America’s budding obesity crisis and the expansion of telehealth clinics in the U.S. that started before the COVID-19 pandemic but boomed as a result of it. These clinics distribute drugs calls GLP-1s, which were formulated to manage type 2 diabetes but have shown remarkable effectiveness as a weight loss supplement in trials.

While the drugs are safe and considered effective, experts fear that these online clinics are basically serving as pill-mills. Anyone desperate enough could shell out over $1,000 each year to take part in programs set-up by firms like Calibrate and Found. While they do provide some coaching and workout plans – the plans are mainly centered around the pills.

They fear that these programs could mislead people with underlying chronic conditions fueling their weight gain, and even if someone does lose weight as a result of using the drugs the lack of long-term support likely means they will gain it back.

America is also currently in the midst of an obesity crisis, with the Centers for Disease Control and Prevention (CDC) reporting that over 40 percent of Americans are obese – with more than 70 percent overweight.

Online telehealth weight-loss clinics are under fire for distributing supplements with little regard, with one expert even describing them as predatory. Wegovy (pictured), a FDA approved supplement, is the drug of choice for many of these companies

‘The world of obesity and weight loss treatments and products have forever been a wild west,’ Dr Scott Kahan, director of the National Center for Weight & Wellness in Washington D.C. told Stat News.

‘While there’s a legitimate core of the field, far more that surrounds it is bogus and nonsense and predatory. And a lot of these telehealth companies, from what I’ve seen, are sort of toeing the line between them.’ 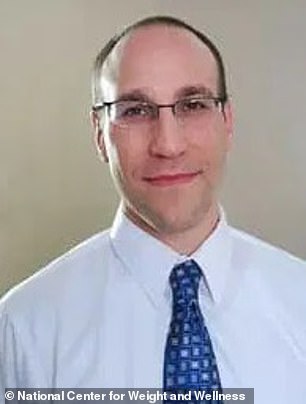 Dr Scott Kahan (pictured), director of the National Center for Weight & Wellness in Washington D.C., warns that the online weight loss industry is ‘bogus and nonsense and predatory’

Two companies in particular were highlighted, including Calibrate, a company that guarantees that customers will lose around 10 percent of their total weight using video coaching, lifestyle tweaks and of course, medication.

Calibrate charges $1,650 for its year-long program. The company did not immediately respond to a DailyMail.com request for comment.

Another firm noted is Found a program which charges $149 per month for access to the prescriptions – alongside a personal health coach, medical provider and a community of others on the same weight loss journal.

Many of these firms prescribe Wegovy, a recently Food and Drug Administration approved GLP-1. It is believed to be a totally safe drug to use.

The drug is only to be used by people who meet the definition of obese or have a BMI higher than 27 and at least one weight-related health condition.

While Calibrate was highlighted for doing some due-diligence to make sure patients were eligible for the drug, Kahan described many of these firms as just conveyor belts giving out drugs after the completion of a quick form.

OBESITY ON THE RISE IN AMERICA’S YOUNGEST CHILDREN

The rate of childhood obesity has tripled since the 1970s, affecting one in five children in the US and 14% of those between ages two and four years old, according to CDC data. Childhood obesity is now the number one health concern among parents in the US, topping drug abuse and smoking.

Obesity continues to plague more than one-third of adults in the US, and experts have warned that that proportion will only grow as younger generations do.

Over the last two decades, the US has implemented countless awareness programs to try to combat the obesity epidemic.

Former First Lady Michelle Obama became a mascot for healthier children while her husband was in office, spearheading the ‘Let’s Move’ campaign, designed to motivate children to eat healthier and stay active in an effort to promote overall health.

But under the Trump administation , the US Department of Agriculture announced that it would relax the school lunch guidelines she championed – requiring more fresh fruits and vegetables and low-sugar dining options – in favor of new rules that would allow sweetened milk and sodium rich entrees.

‘When you create these conveyor belt treatment programs, I think that’s where you risk more blanket inappropriate care, or really stretching the bounds of what’s medically appropriate,’ Kahan said.

Many more-sketchy firms also advertise themselves as providing same-day appointments and easy weight loss without the need for diet and exercise – selling patients on the idea that drugs along are a healthy and effective weight-loss treatment.

‘A lot of these [companies], unfortunately, hold the GLP-1s up and sort of dole them out like candy,’ according to Kahan.

There are a few conflicts of interest at play as well. Contrave is an FDA approved weight-loss drug manufactured by Tennessee-based pharmaceutical company Currax.

The firm runs a telemedicine firm that prescribes its own weight-loss drugs as well.

These are not the only telehealth firms facing scrutiny for over- or mis-prescribing prescriptions drugs.

Popular online mental health clinics Cerebral and Done have both faced scrutiny in recent months for their distribution of drugs like Adderall and Xanax.

Cerebral even faced a Department of Justice subpoena over potential misuse of the controlled substances.

While experts fault these companies for taking advantage of needy Americans, they also point some blame at failures is U.S. health care.

Despite obesity and mental health problems being the most talked about, publicized, current issues in American health, the nation is suffering from massive shortages in professionals that can treat the conditions.

This pushes many patients in need to these online, potentially predatory platforms that sell them on dreams of a quick fix to what may be a deep rooted hard to solve condition.