Research being peddled by anti-vaxxers as proof that Covid jabs don’t work was today branded a desperate attempt to ‘legitimise quasiscience’.

The survey, based on answers from 18,500 members of an anti-vaxx group, claims hospitalisation rates were lower among the unvaccinated.

The authors suggested this was, in part, due to the usage of vitamins and largely debunked Covid ‘cures’ ivermectin and hydroxychloroquine.

It was hailed by anti-vaxxers online, who called it a ‘vindication’ of their beliefs and celebrated the publication of ‘real science’.

But leading scientists today criticised the ‘flawed’ and ‘biased’ research, produced by a ‘natural health’ specialist, alternative healers and a doctor who runs a weight loss business.

Anti-vax movements have become more vocal in the UK, US, Australia during the pandemic, pictured here is a protestor at a demonstration in Sydney last month

Have YOU been struck by hay fever for first time ever this year? Blame Covid lockdowns and global warming, experts say

If you’re suffering from hay fever for the first time this year, you’re not alone.

There has been a surge in the number of people who report experiencing its symptoms on social media, seemingly out of the blue.

Google trends for hay fever are also at a record high, with twice as many searches for the condition in the UK now compared to five years ago.

There has been a gradual rise in cases in recent decades, linked to modern living, but experts say lockdowns and global warming may have sped up the trend.

Known as the ‘hygiene hypothesis’, the idea is our immune systems are more sensitive to allergens like pollen because we are exposed to fewer germs.

A lack of social contact during the pandemic may have weakened our bodies further, while there is evidence climate change has prolonged the pollen season.

It comes as ‘super pollen’ counts are forecasted across England and Wales this weekend, due to a weather phenomenon known as ‘thunder fever’.

The global survey, which was published last week, was based on self-reported data from between September 2021 to February 2022.

It compared the self-reported hospitalised rates among its participants, who came from 175 different countries, with data from the US Centers for Disease Control and Prevention (CDC).

Lead author Robert Verkerk, a doctor of philosophy at Alliance for Natural Health International, claimed in a five month period the CDC reported 0.6 per cent of the US population were hospitalised with Covid.

Only 0.4 per cent of survey members reported being hospitalised with the virus, in a finding that implied jabs were ineffective.

But Professor Ian Jones, a virologist at the University of Reading, described it as an ‘attempt to legitimise quasiscience’.

He criticised its reliance on self-reporting, saying members quizzed would want to highlight how mild their Covid was to justify their decision to not get jabbed.

‘Self-reporting is never reliable, especially when those signed up would already be convinced of their own argument,’ he said.

‘Much like religion in that respect, only religious people are convinced of miracles and that god is watching over them.’

Professor Jones accepted that people were entitled to not get a vaccine but said it was clear that vaccines have helped beat the virus.

Before jabs came about, Britain and other countries had little option but to adopt economically-crippling lockdown curbs in order to thwart the spread of the virus.

But vaccines changed the course of the pandemic, allowing nations to feel they can open up safely again and return to life pre-Covid.

Professor Jones said: ‘Non-vaxxers are welcome to their choice, I am not in favour of compulsion.

‘But any trial needs to be evenly matched with a control group of similar people with similar habits.

‘And it is strange isn’t it, that much bigger trials all over the world with the vaccines have all shown that vaccination reduces risk and its sort of obvious from where we are now compared to where we were two years ago.’

He added the danger behind this survey is that it could convince others to follow in their footsteps. 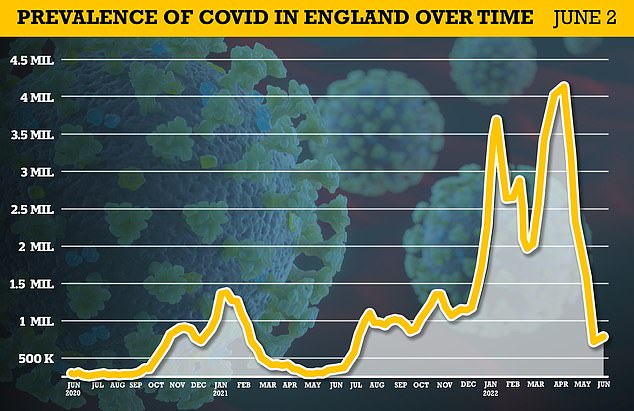 Office for National Statistics (ONS) statisticians estimate 797,500 people in England had Covid each day during the week ending June 2

‘The damage done by this sort of guff is that someone vulnerable, somewhere, is led to believe that quaffing vitamin tablets and off licence drugs is going to save them, when it will not,’ he said.

Dr Simon Clarke, an infectious disease expert at Reading, said it was critical to note the paper had not gone through any scientific review.

He added: ‘Description of the experimental methods, controls and how the data this study leans on were arrived at, seem to be entirely missing, so it’s impossible to be confident that they are valid.

‘This pre-print is so weak, I’ll be amazed if it ends up being accepted by any serious publication.’

Professor Lawrence Young, a virologist at Warwick University, argued the evidence on vaccines was ‘irrefutable’.

‘There is absolutely no doubt the vaccines have changed the course of the pandemic by reducing severe illness, hospital admissions and deaths,’ he said.

He added it was impossible for the study to be objective or unbiased, considering its participants tend to be actively opposed to getting Covid jabs.

Numerous reliable studies have shown Covid vaccines significantly reduce the risk of severe disease, a key factor in enabling the UK and other countries to remove draconic restrictions on their citizens.

According to the latest Government data 69 per cent of the eligible UK population, about 40million people, have had three doses of a Covid vaccine.

Fourth doses for people especially vulnerable to the virus were rolled out in the Spring, and another round of top ups are due this Autumn.

The authors of the survey said they wanted to highlight the discrimination, job losses and mental health issues the unvaccinated face from wider society.

The study also reported that the majority of participants who reported catching the virus took vitamin D and C supplements as well as the drugs ivermectin and Donald Trump-backed hydroxychloroquine.

While both drugs had initial studies suggesting they were effective treatments for Covid, scientists have since largely dismissed these as being flawed.

Anti-malarial hydroxychloroquine was also thrust into the limelight as a potential Covid treatment in 2020 by the then-US President Trump, who called it a ‘gift from God’. Claims were similarly dismissed.

The only possible upshot of the anti-vax study for scientists is that it did help reveal why people chose not to get the vaccine.

Participants listed a preference for natural medicines, a distrust of pharmaceutical companies, a distrust of government information, insufficient trial data and concerns over long-term adverse reactions as their top five reasons for opting out.

The study authors also claimed that among their participants those who never wore masks reported the lowest levels of Covid.

Evidence shows that, when worn correctly, masks can reduce the spread of particles that could carry the virus when exhaled— but by how much is still contested.

The survey of Control Group members has been uploaded to ResearchGate.