Experts today warned the US risks creating an opioid-like crisis with anxiety pills if it decides to screen everyone under the age of 65 for the condition.

The US Preventative Services Task Force, one of the most influential bodies in US health care, recommended last month that the roughly 200million Americans aged 18 and above are checked – even if they don’t have any symptoms.

It would make clinical help for anxiety more accessible and force patients to jump through less hoops to get help, the doctors claim.

But experts told DailyMail.com it could spur a surge in prescriptions for anti-anxiety medication – which are already feared to be at the center of a budding addiction crisis in the US.

The most common anxiety medications fall into the class of benzodiazepines, with fast acting drugs like Xanax, Klomopin, Valium and Ativan being among the group.

Dr Anna Lembke, chief of the Addiction Medicine Dual Diagnosis Clinic at Stanford University, told this website she feared the new guidance had echoes of the opioid epidemic.

Dr Jonathan Shedler, a psychiatry professor at the University of California, San Francisco, told Fox News that following the recommendation would be ‘terrible’.

The Centers for Disease Control and Prevention reports that 107,000 Americans died of a drug overdose in 2021 – with nearly 80 per cent caused by opioids.

Some experts fear that new anxiety screening guidance for all American adults under-65, even if they don’t suffer symptoms, could lead to over-medicalization and even fuel a potential opioid-like addiction crisis (file photo)

It is open to public comment until October 17, but it is rare that draft guidance is not affirmed into official guidelines.

It previously made similar recommendation for children aged eight to 17 years old as well.

Around one-in-five Americans adults – or around 40 million people – are estimated to suffer from anxiety to some degree.

The group cites growing prevalence of anxiety during the pandemic as part of the reason for the change, but say the issue had been mulled over even before the rise of Covid.

He notes that under these guidelines, a primary care physician will be screening patients for anxiety using a quick seven question survey – before any evaluation from a psychologist.

‘Primary care is not the place to get mental health care,’ he continued.

These quick screenings will make it easy for a person to walk out of the doctor’s office with a prescription to an anti-anxiety drug. 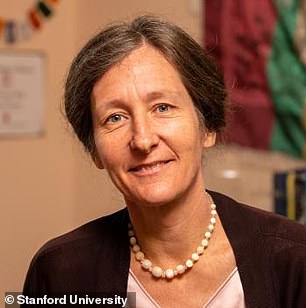 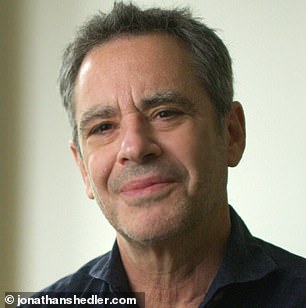 Dr Anna Lembke (left), chief of the Addiction Medicine Dual Diagnosis Clinic at Stanford University, compared the guidance to prescription pain pill recommendations blamed for sparking the opioid crisis in the US. Dr Jonathan Shedler (right), a psychiatry professor at the University of California, San Francisco, said that primary care physicians are not equipped to screen for anxiety

A simple survey is inadequate, Dr Shedler said, as everyone’s circumstances are different and answers to a few questions can not tell the entire story.

‘This kind of screening is going to diagnose huge numbers of people with a disorder and a good number of them are going to end up on a lifelong path of one medication and one treatment after another,’ he went on.

‘When, in fact, they’re responding to realistic circumstances in the world.’

Dr Lembke fears that this will spur yet another addiction crisis in the US.

Benzodiazepines, often referred to as benzos, are the most common class of anti-anxiety medication prescribed in the United States.

They are also often abused as a party drug because of their intense, fast-acting, side effects.

The drugs are highly effective at cutting someone’s energy and putting them into a relaxed state.

Benzos are highly addictive, though, and even when used properly a person could develop dependence on them over time.

Popular drugs that fall into the category include Valium, Klonopin, and Xanax

‘In the United States when the Joint Commission mandated that all doctors screen all patients for pain, even when patient’s did not come in for pain complaints or demonstrate physical stigmata of being in pain, the result was increased opioid prescribing, contributing to our current opioid epidemic,’ she told DailyMail.com.

‘I could see something similar happening with mandated screening of anxiety.’

She highlights drugs like Valium, Klonopin, and Xanax – which all fall under the umbrella of benzodiazepines, or ‘benzos’ – as specifically dangerous.

The drugs are highly addictive and their intense side-effects have made them popular party drugs.

A person who uses the drugs each day to manage severe cases of anxiety could become dependent on them in a matter of weeks, studies suggest.

The body builds tolerance to the drugs as well, meaning a frequent use will need more-and-more over time to control their addiction.

Like opioids, eventually prescriptions run out or become unobtainable.

In most extreme cases, users turn to the street where versions of the drug that could have dangerous contaminants like fentanyl circulate.

Fentanyl is the main driver of America’s drug overdose crisis, responsible for 70 per cent of these deaths in the US.

Some experts also fear that these new guidelines could stress and already over-burdened health care system.

Dr Gail Saltz, an associate professor of psychiatry at the NY Presbyterian Hospital Weill-Cornell School of medicine, told DailyMail.com that a critical shortage in psychiatrists and psychologists in the US will leave many newly-diagnosed anxiety patients with little help to manage their condition.

She also fears that the screening performed by primary care physicians will pull them away from performing other routine check-ups, especially among older people who need to be screened for diseases like cancer.

Doctors often only have 15 minutes to spend with each patient before they have to move on with their packed schedule, leading them often short on time and energy to perform all necessary duties.